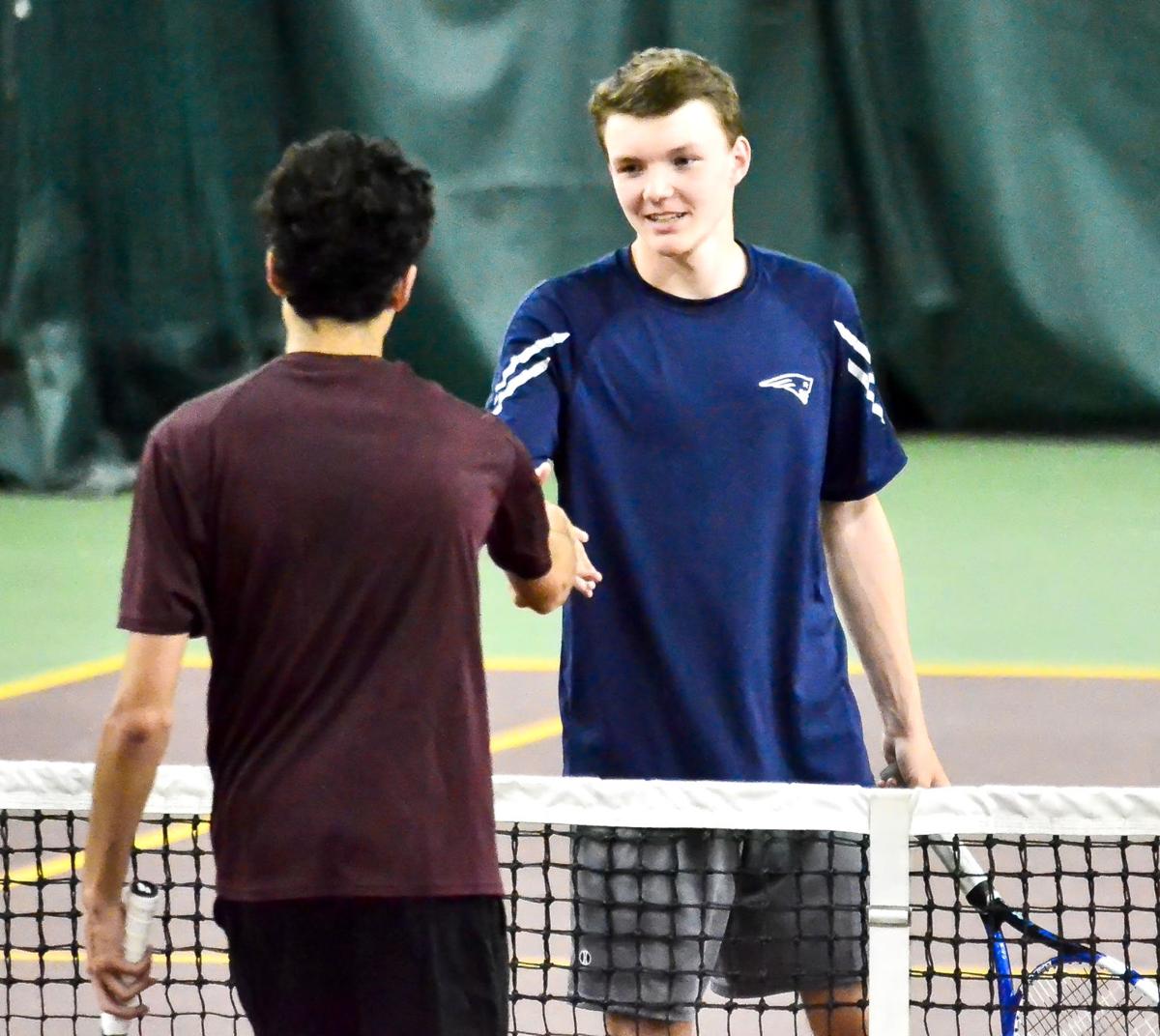 Champlin Park senior Dom Witt shakes the hand of an opponent during the 5AA individual section tournament in 2019. Witt was the No. 1 singles player and was coming off a season where he made the semifinals and took fourth at sections. 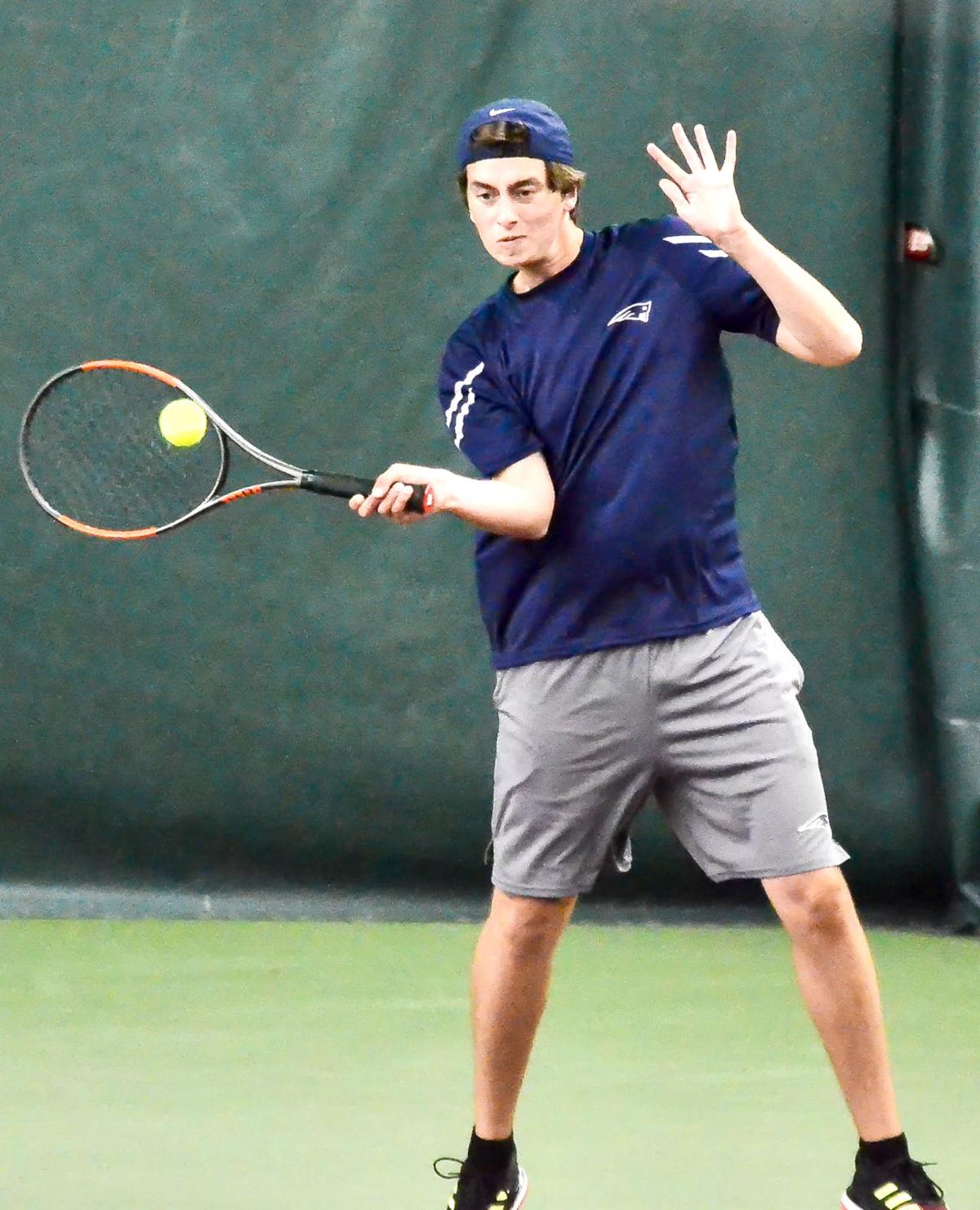 Champlin Park senior Cade Moffit hits a forehand shot during the 5AA individual section tournament in 2019. He was a member of the No. 1 doubles team that made the quarterfinals. 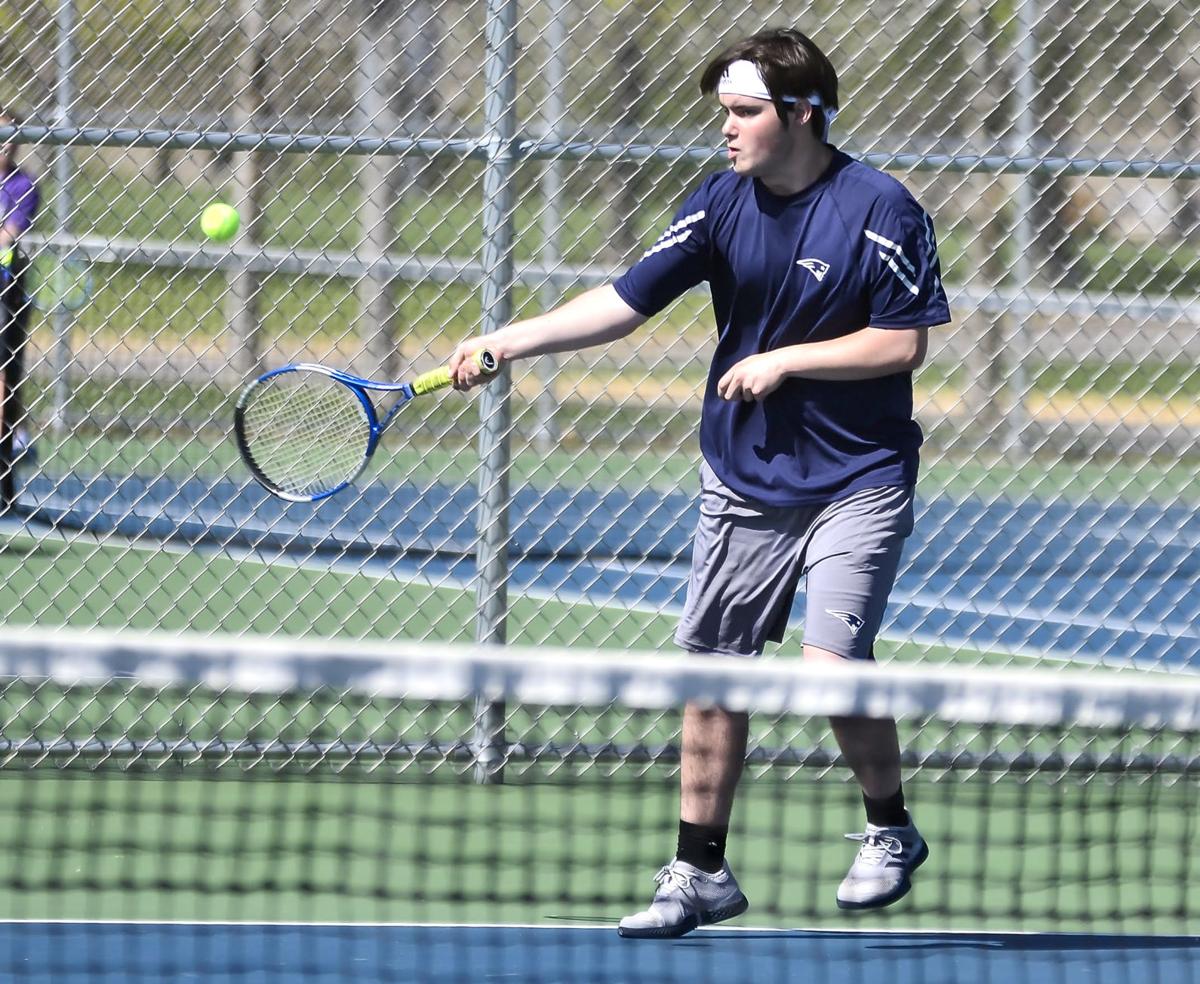 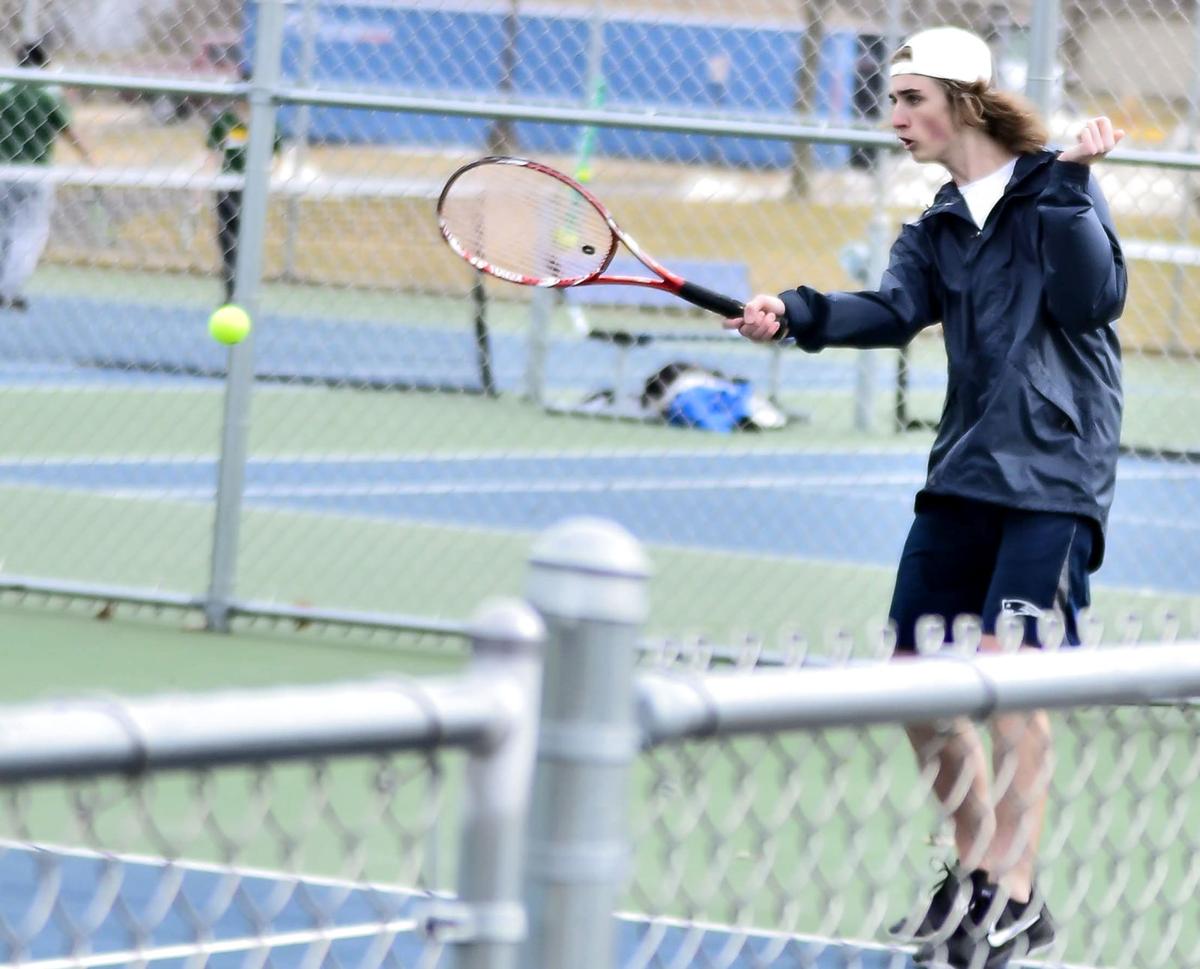 Champlin Park senior Joe Heck returns a serve in a match in April 2019. Heck was a member of the No. 3 doubles team last season.

Champlin Park senior Dom Witt shakes the hand of an opponent during the 5AA individual section tournament in 2019. Witt was the No. 1 singles player and was coming off a season where he made the semifinals and took fourth at sections.

Champlin Park senior Cade Moffit hits a forehand shot during the 5AA individual section tournament in 2019. He was a member of the No. 1 doubles team that made the quarterfinals.

Champlin Park senior Joe Heck returns a serve in a match in April 2019. Heck was a member of the No. 3 doubles team last season.

Champlin Park boys tennis came into 2020 with four returning seniors, a fifth senior who played as a freshman and a sophomore and two juniors that showed improvement in 2019.

Senior Dom Witt was back as the No. 1 singles player after making it to the semifinals and finishing fourth in the 5AA individual section meet, missing state by two spots.

Senior Cade Moffit was one half of a No. 1 doubles team that advanced to the 5AA section quarterfinals, and seniors Jack Gilk and Joe Heck were starters with the No. 2 and No. 3 doubles teams, respectively, in 2019.

Senior Jack Nightingale also decided to rejoin the tennis team after missing his junior year to participate in track and field to train for the cross country and Nordic skiing seasons. Nightingale played tennis as a freshman and sophomore on junior varsity and probably would have made the varsity team as a junior, coach Brian Larson said.

Juniors Kyle Horton (No. 2 singles) and John Andoh (No. 4 singles) also were bringing back experience from 2019.

Together they helped the Rebels finish 10-3 as a team in duals. Even with some key graduations, Larson said he expected the 2020 team to be in the mix for a strong season again.

“We kind of felt like we were gonna pick up where we left off last year,” Larson said. “The guys we lost to graduation were obviously key components, but we had other guys coming up that could have filled their spots. And with those four seniors coming back with years of experience, we thought we were going to have a really strong year for us.”

Witt was 11-7 overall in 2019 and is a three-sport athlete at Champlin Park, also playing football and basketball. Larson said he was always working out and staying busy and was obviously disappointed to not have a chance to go to state.

Larson said Witt is trying to make the tennis team at St. John’s University to continue his career.

“He loves the game,” Larson said. “He’s always trying to get better, and it’s unfortunate in his senior year, he couldn’t play for us because we haven’t had a guy like that round for quite a while.”

Like Witt, Moffit started with the Rebels’ varsity team as a freshman. Moffit joined 2019 graduate Grant Hilbrands for a 9-7 record last season and was either going to play doubles again or possibly move to singles.

Gilk played with 2019 seventh-grader Gavin Kelleher, who was expected back with the team, on No. 2 doubles last season and finished with a 7-7 record. Heck was a part of the No. 3 doubles team with 2019 graduate Doni Nguyen and finished 11-3.

Both Gilk and Heck began with varsity as sophomores.

“(The seniors) were fun guys to be around,” Larson said. “They were athletes. They were leaders. They played other sports, so they brought that competitive edge to the tennis courts. Where sometimes some of our players aren’t overly competitive or aren’t overly athletic, those guys just brought the no nonsense, ‘Let’s have fun but let’s also work hard and get better and see what we can do.’”

“It is unfortunate that we weren’t able to send them off, because that senior year can always be kind of a special time.”

The season was first suspended due to the COVID-19 pandemic in mid-March so much of the lineup wasn’t set, especially with what the doubles pairings would be and who would fill the vacant singles spot.

It would be about a month before the spring sports season was officially canceled on April 23, and Larson said it was a challenging time.

The coaches received very little direction on how to handle the teams during that stretch. Coaches couldn’t have a lot of contact with players either, but Larson wasn’t necessarily worried about keeping everybody ready to go in case there was a season.

Larson said with the spring being nice, once the tennis courts were opened, he saw players on the court from time to time. But for the most part, he just sent messages to make sure the students were OK, not with tennis but with the bigger picture of life during a pandemic.

Now that the season was canceled, the Rebels will go from having a lot of experience to having just Horton and Andoh expected back from varsity in 2021.

Tennis is low-risk right now, so younger players can at least get some practice time in during the offseason. But the loss of varsity playing time will be difficult to overcome for Champlin Park in 2021.

Freshman Jake Nord played high JV in 2019 and is expected to jump into the varsity lineup, but the rest of the team is wide open. And the number of athletes coming out to play tennis is also unknown.

Larson said he wonders whether students will want to be involved more and get out of the house or if they are now accustomed to being at home. And the middle school team also didn’t have a season in 2020, which means that it is hard to gauge young talent.

But Larson will be talking, recruiting, building up the program and trying to get numbers and talent.

“You kind of start over, which It is not exactly a real fun position to be in,” Larson said. You just see who you can bring in.”