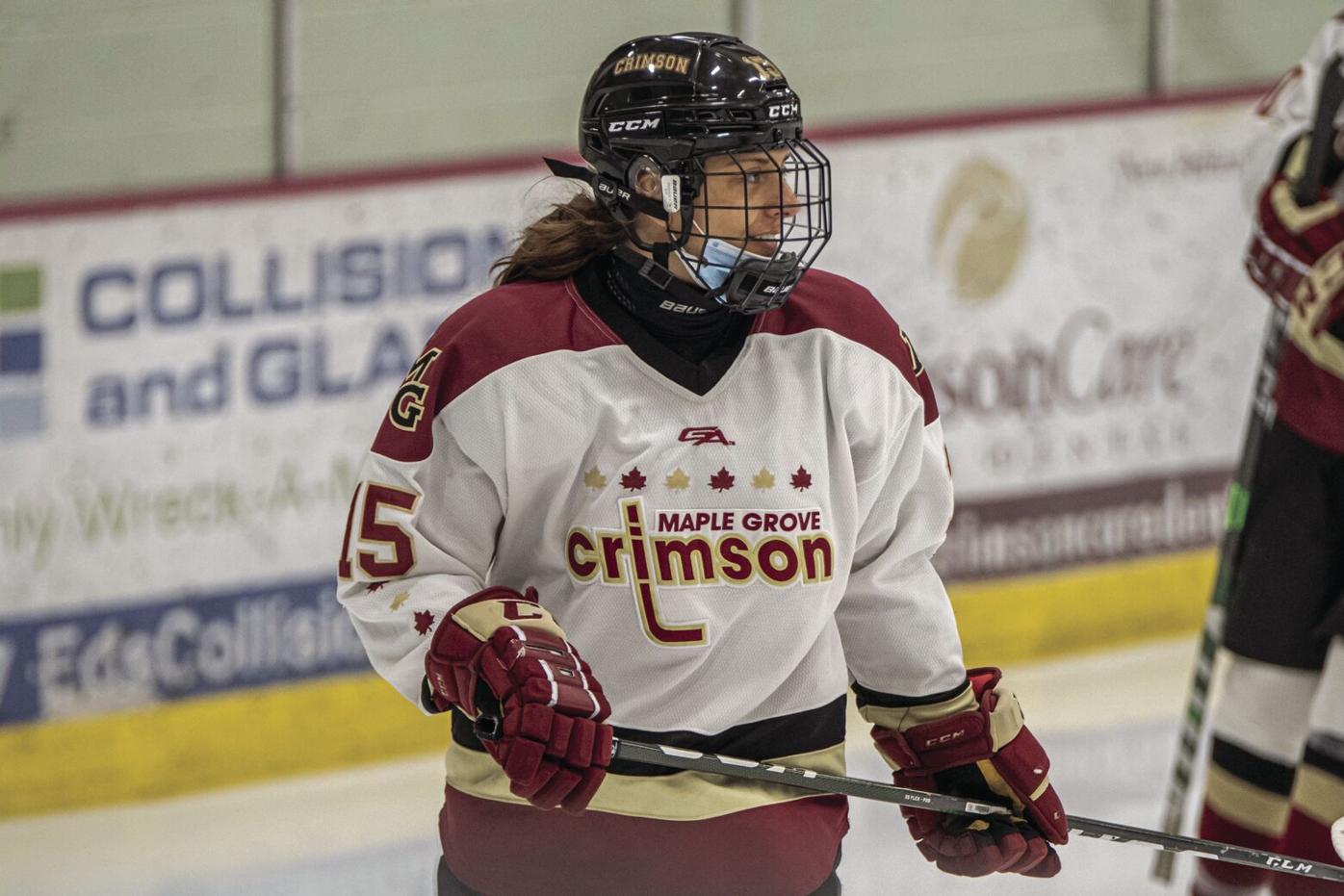 Taylor Holm plays hockey for Maple Grove during the 2020 season. “We learned a lot of things from last year and are ready for challenges ahead,” Holm said. “I think we can make a good run this year. We’re ready to get after it. We’re excited for a fresh start.” (Photo courtesy of Taylor Holm) 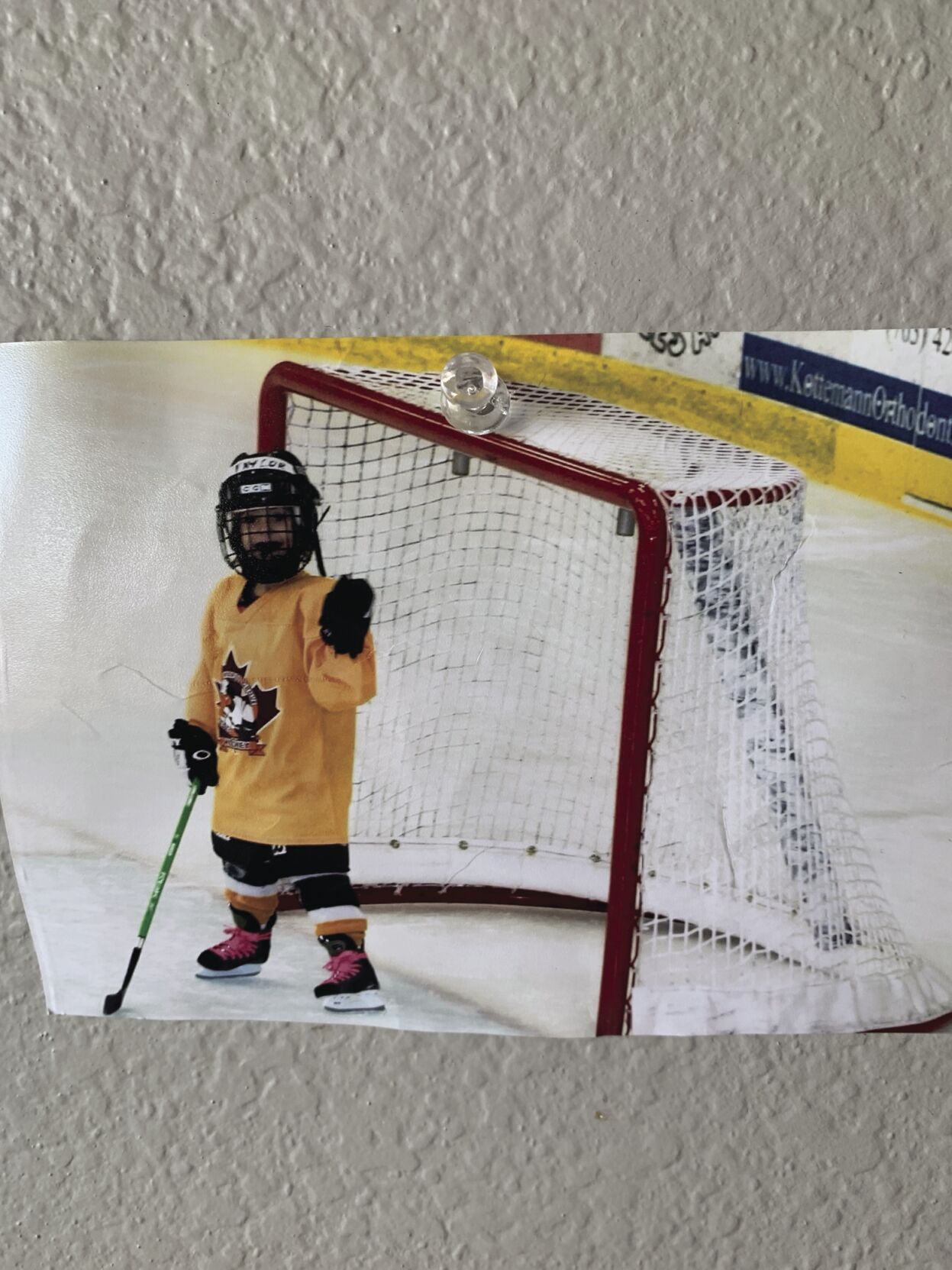 Maple Grove’s Taylor Holm smiles while playing mini-mite hockey at age 4. Holm played under coaches John Cassidy and Luke Johnson during mini-mite and Mite hockey, and sent each of them a personal thank you note after she committed to Post University in August 2021. (Photo courtesy of Taylor Holm) 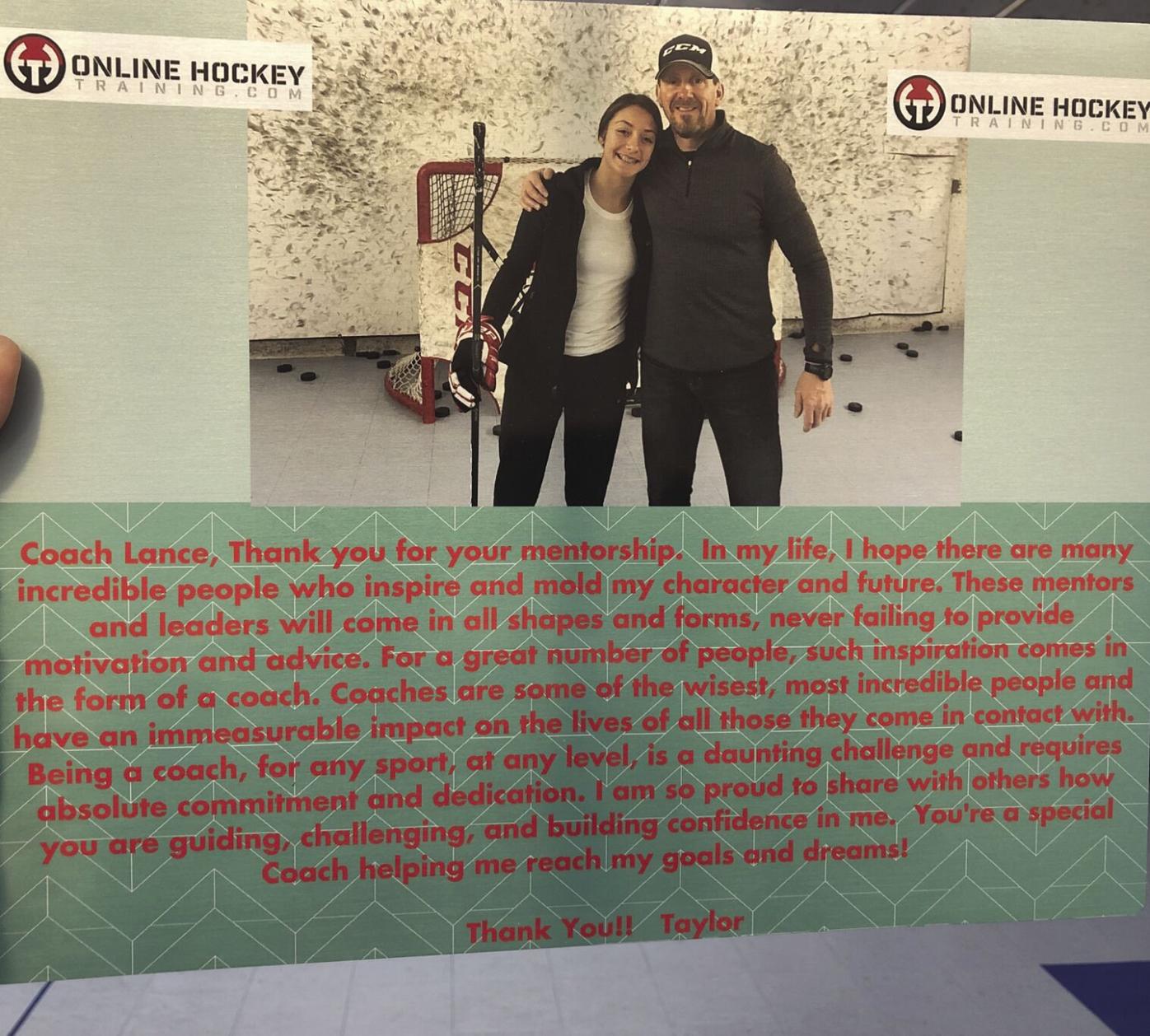 Lance Pitlick’s thank you note from Taylor Holm. “Not many in this day and age [send thank you cards],” Pitlick said. “She is very caring, gracious, humble, and hardworking. When you have humility and hard work, good things can happen.” (Photo courtesy of Lance Pitlick) 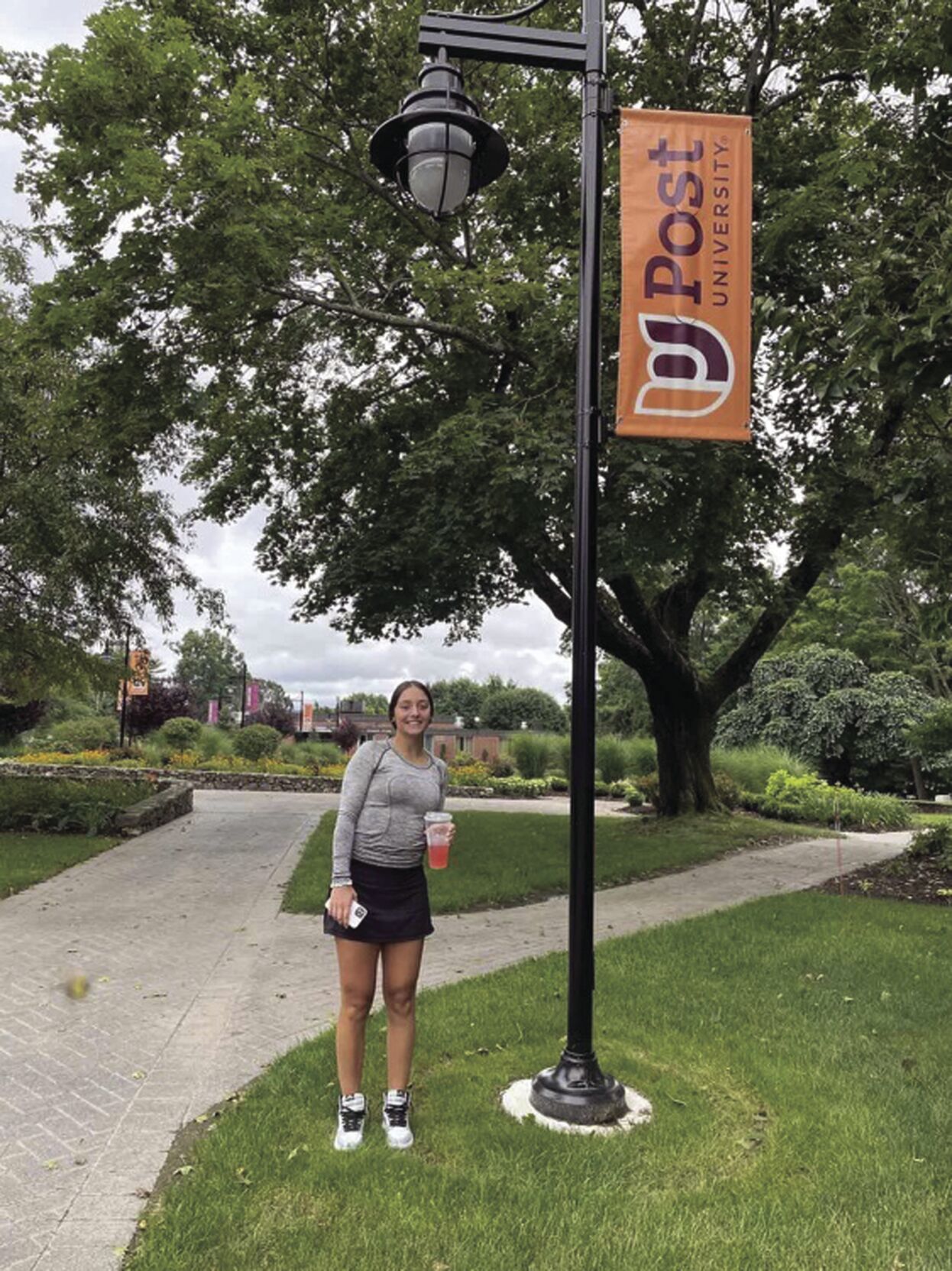 Taylor Holm tours Post University in Connecticut. Holm, a senior at Maple Grove, announced on August 15 that she committed to playing Division 1 hockey at Post starting in 2022. (Photo courtesy of Taylor Holm)

Taylor Holm plays hockey for Maple Grove during the 2020 season. “We learned a lot of things from last year and are ready for challenges ahead,” Holm said. “I think we can make a good run this year. We’re ready to get after it. We’re excited for a fresh start.” (Photo courtesy of Taylor Holm)

Maple Grove’s Taylor Holm smiles while playing mini-mite hockey at age 4. Holm played under coaches John Cassidy and Luke Johnson during mini-mite and Mite hockey, and sent each of them a personal thank you note after she committed to Post University in August 2021. (Photo courtesy of Taylor Holm)

Lance Pitlick’s thank you note from Taylor Holm. “Not many in this day and age [send thank you cards],” Pitlick said. “She is very caring, gracious, humble, and hardworking. When you have humility and hard work, good things can happen.” (Photo courtesy of Lance Pitlick)

Taylor Holm tours Post University in Connecticut. Holm, a senior at Maple Grove, announced on August 15 that she committed to playing Division 1 hockey at Post starting in 2022. (Photo courtesy of Taylor Holm)

Taylor Holm lives with a thankful heart. As an athlete and captain in the Maple Grove girls hockey program, Holm has had plenty of experience to know excelling in a team sport is much more than one individual’s talent. It takes a village to make the team successful, many players doing their job and buying into the culture of the program.

The same goes for off the ice as well. Throughout Holm’s hockey journey, many coaches and mentors have played a role in getting her where she is today. So now, entering her senior year at Maple Grove Senior High, the least Holm could do, she thought, was to express to them how much they mean to her.

Holm’s experience with influential coaches goes back to her preschool years. When she was 4 years old, Holm’s father, Adam, took Holm and her older sister to an ice rink for the eldest’s figure skating lessons. As they were there, Holm was about to sign up for figure skating until a lady pulled her aside and said a phrase that would shape her athletic future: “I think you should try hockey.”

So she did. And she wouldn’t ever stop. “It was nonstop hockey from the age of four,” Adam Holm said. “It was her happy place.”

From there, Holm began working with two youth coaches, Luke Johnson and John Cassidy, at the mite level, which is for kids eight years old and younger.

Cassidy said he remembers coaching many girls ages 4 to 7, but none grabbed his attention quite like Holm. “Taylor stood out the most,” he said, a youth hockey coach of 14 years. “There was nobody at her age that worked as hard as she did. All loose puck and Taylor were close friends. She hustled her butt off. It was infectious.”

From repetitive drills to a constant hunger to get better at a young age, Cassidy saw an impressive work ethic in the young athlete. “She wanted to do it right all the time,” he said.

At that age level, teams were broken up evenly into four groups where they would scrimmage or have joint practices outdoors. Through all the cold temperatures and bruised joints, Cassidy never heard Holm complain once. Other kids may have been more naturally gifted than Holm, but she made up for it in grit and determination. “She outworked everyone,” Cassidy said.

Johnson first met Holm when she was 4 years old and in the same youth program as Johnson’s daughter, Annika. Through the years, Johnson, who was an all-state hockey player at Osseo Senior High and played college hockey at the University of Minnesota before turning pro, has often coached Holm’s summer programs and has seen her development firsthand.

“Taylor plays with an aggressive edge,” Johnson said. “She is a strong skater and a good passer, but when she shoots, a lot of times she’ll bury it. She is a well-rounded player.”

To those who know the game inside and out, her skills are evident. But what is not seen in the shooting or passing is how Holm handles herself off the ice. “Taylor is such a bigger-than-life character,” Johnson said. “She is always positive, always laughing, and is inclusive of everybody.”

Taking the next step

As Holm got older, her work ethic towards the sport only grew. She and her family ended up moving to St. Cloud because of Adam’s work, but that didn’t stop Taylor from devoting hours upon hours to her craft.

Pitlick said Holm’s goals were simple: move up the depth chart on the varsity squad and to one day play college hockey. Within six months, he said Holm made a “huge leap.” “Initially, she was raw,” Pitlick said. “But I could see in the first lesson that she bought into the training, and that is what she did.”

During the sessions held in Pitlick’s garage, the two of them worked on mastering and building off the fundamentals: passing, shooting, and handling. Pitlick, who runs his own training company called Online Hockey Training, has been working with hockey players for 15 years, including with his two sons (one plays in the Nashville Predators organization in the NHL and the other for the University of Minnesota).

During his playing career, Pitlick never had access to YouTube or a database of exercises to watch and learn from, so he wanted to give back to athletes in this generation and help them be successful in the sport.

In doing that, Pitlick, who trains college and pro hockey players, as well as women vying to make the U.S. women’s national team, created an online database of over 1200 drills to help athletes he trains. “Everything I have in my life today is because of the game of hockey,” Pitlick said.

Taylor still meets with Pitlick often, using his training to take her game to the next level. “I put a lot of time into hockey,” Taylor Holm said. “To be good, you have to put in the work.”

One of the two goals set with Pitlick had been reached: rising in the varsity depth charts (she is set to be a key forward for new Crimson head coach Jim Koltes and the team in the winter). Entering this summer, the other was still to be determined.

Holm and her family visited several schools the past few months, with her decision coming down to Stonehill College in Massachusetts, and Post University in Connecticut. But after touring Post and talking with head coach Heath Issacson for five hours during a campus visit, Holm was sold. “I felt at home when I visited,” she said. Holm officially announced her decision to play at Post on Aug. 15.

During her college selection process, Holm met regularly with family friend and mentor Dave Thorpe, who has mentored many soon-to-be Division 1 athletes. Thorpe, who was a former Osseo girls basketball coach for many years, has known Holm since she was a little girl. When she needed someone to talk to regarding college visits and questions surrounding the happenings at a Division 1 school, Holm reached out to Thorpe. “I give her a lot of credit for understanding when to ask for help,” Thorpe said.

With all her time spent on the ice, mastering the fundamentals of the sport, Holm has people like Thorpe in her life who help her master the off-the-ice elements of hockey, notably interpersonal and relational skills.

“Taylor is a complete package,” Thorpe said. “She is a good student and knows how to relate to others. She’s not just an athlete.”

After choosing to play college hockey at Post University, Holm knew she had to say thank you to everyone who helped her get to where she was: a soon-to-be Division 1 athlete. Adam suggested getting hats to all the coaches and mentors, but Taylor’s response was, “that’s not personal, Dad.”

She knew it shouldn’t be just a text or call, so Holm started hand writing letters. Assisted by Shutterfly, she ordered cards printed with a personal note to 21 different coaches and mentors that impacted her life.

The hardest part of the whole process for Holm? Finding the up-to-date addresses of all her current and former coaches and mentors. “Each coach has a special place in my heart and is a part of making me the person and player I am today,” Taylor Holm said. “Without their development, I wouldn’t be where I am.”

Soon after her announcement in mid-August, the cards started coming in the mail. Cassidy, who now lives in New Hampshire, got his card a week ago. “I’ve never seen such a heartfelt gesture,” he said. “I read it and got teary-eyed. It was incredibly thoughtful for her to do that. Coaching is often a thankless job and it was great to see someone appreciate it.”

“It is a great thing what she did,” Pitlick said. “Not many in this day and age [send thank you cards]. She is very caring, gracious, humble, and hardworking. When you have humility and hard work, good things can happen.”

“She is very thoughtful and thankful for what she has...that shows maturity and leadership,” Johnson said. “It is why you coach. You want to see these kids be successful. It puts a smile on my face.”

The cards are just one small example of Holm’s attitude of gratitude. It wasn’t done out of monotony or obligation, instead out of a thankful heart. “She is very proud of the fact that she loves hockey and people go above and beyond for her,” Adam said. “She has had so many wonderful coaches in her journey.”

“Each of my coaches and mentors are so special,” Taylor Holm said, “and I wanted them to know that.”