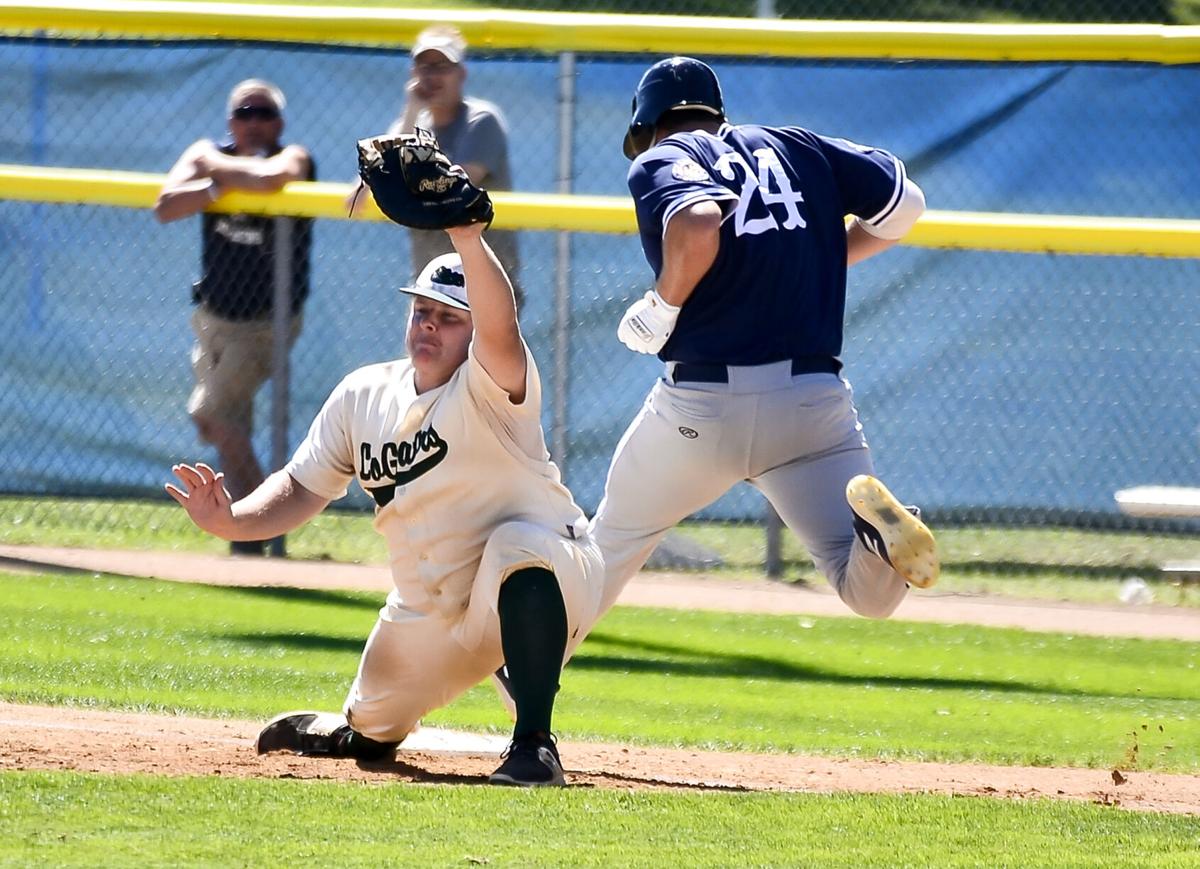 Champlin first baseman Reid Conlee stretches to secure an out on a close play in the second inning Aug. 29 against Miesville in the Minnesota Baseball Association Class B state amateur tournament at Joe Schleper Stadium in Shakopee. The LoGators' season came to an end in a 5-2 loss. 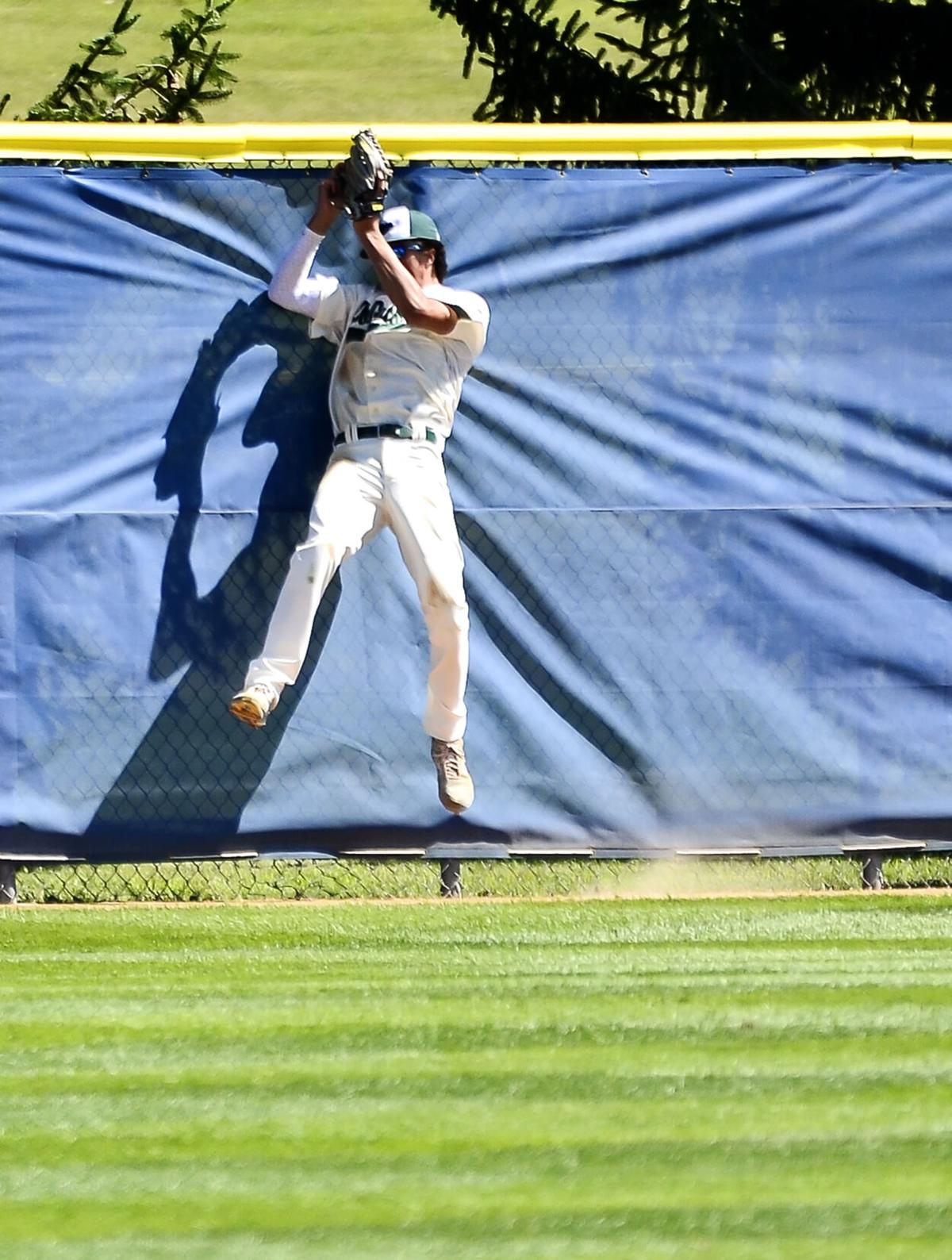 Champlin center fielder Jack Puder robs a hit in the bottom of the fifth inning with a leaping catch before slamming into the wall Aug. 29 against Miesville in the Minnesota Baseball Association Class B state amateur tournament at Joe Schleper Stadium in Shakopee. 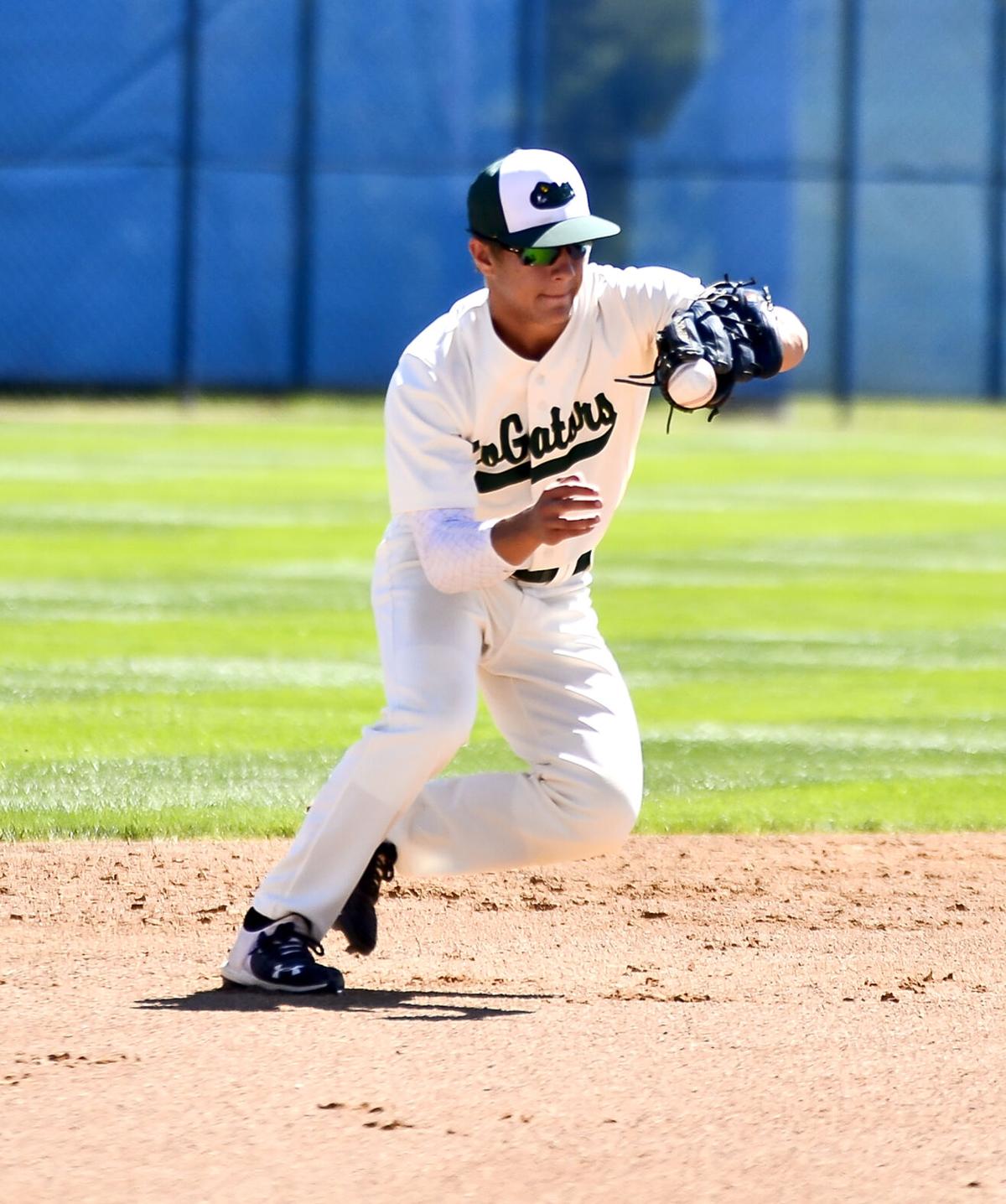 Champlin's Bryce Nelson fields a ground ball in the bottom of the second inning Aug. 29 against Miesville in the Minnesota Baseball Association Class B state amateur tournament at Joe Schleper Stadium in Shakopee. 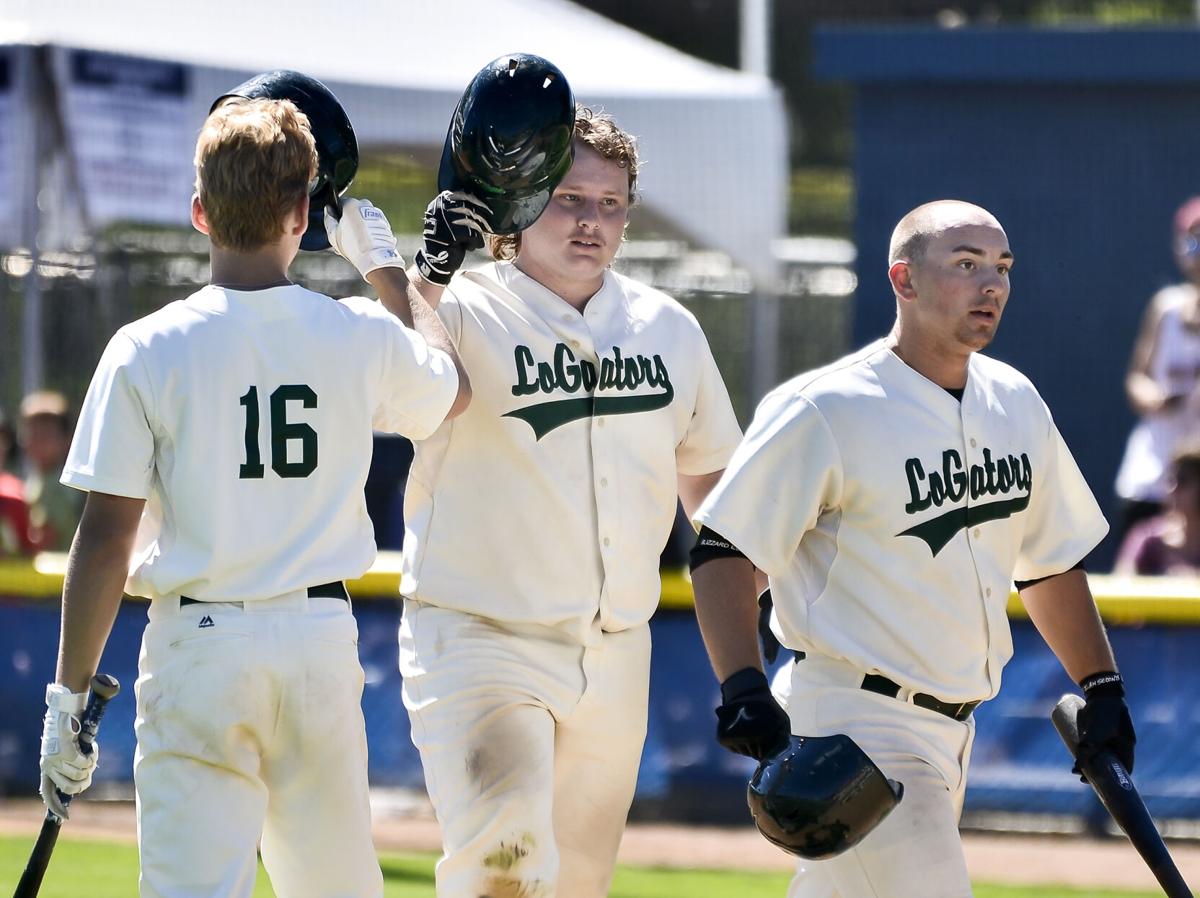 Champlin first baseman Reid Conlee stretches to secure an out on a close play in the second inning Aug. 29 against Miesville in the Minnesota Baseball Association Class B state amateur tournament at Joe Schleper Stadium in Shakopee. The LoGators' season came to an end in a 5-2 loss.

Champlin center fielder Jack Puder robs a hit in the bottom of the fifth inning with a leaping catch before slamming into the wall Aug. 29 against Miesville in the Minnesota Baseball Association Class B state amateur tournament at Joe Schleper Stadium in Shakopee.

Champlin's Bryce Nelson fields a ground ball in the bottom of the second inning Aug. 29 against Miesville in the Minnesota Baseball Association Class B state amateur tournament at Joe Schleper Stadium in Shakopee.

Line drives didn’t fall for the Champlin LoGators in a tough 5-2 loss to the Miesville Mudhens Aug. 29 in the second round of the Minnesota Baseball Association Class B state amateur tournament.

The LoGators (24-10 overall) hit the ball hard off of Mudhens’ ace pitcher Jacob Dickmeyer and finished with seven hits off him. But most balls stayed up too long and were caught, minus a 2-run home run by first baseman Reid Conlee.

Catcher and manager Matt Marek said they didn’t beat themselves, which is the main thing. Pitcher Jerry Gooley pitched well and was hurt on two mistakes, and he also ended up with 90 pitches in just five innings.

Miesville did all of its damage in the fourth and fifth innings off Gooley, who hung two offspeed pitches that ended up over the fence.

Brian Sprout, who played for the Los Angeles Dodgers Double-A affiliate the Jacksonville Suns in 2005 and 2006, hit a 2-run homer to left field in the fourth. Nate Hammes added an RBI sacrifice fly in the fifth, and Austin LaDoux hit a 2-run home run in the fifth.

“Those guys worked at-bats and kind of ran his pitch count up a bit,” Marek said. “I thought he pitched pretty well and battled against a pretty good lineup.”

Dickmeyer allowed one earned run and added seven strikeouts in the complete-game win for the Mudhens.

Champlin had two hits in the first inning with designated hitter Ryan Bruns and Marek (2-for-4) reaching base with singles. Marek said the game might have been different if some runs crossed the plate in the first.

“If we could have come out and punched them in the mouth a little bit, I think it’s a different game,” Marek said. “That’s kind of the thing on (Dickmeyer) too. You have to get to Dickmeyer early because when he gets into a groove, he is pretty tough.”

Outfielder Ethan Mocchi reached base in the top of the sixth after a dropped flyball by the right fielder, who had called off the center fielder before the ball popped out of his glove.

Conlee followed with a towering home run that ended up well over the 355-foot sign in left-center field. That cut the deficit to 5-2.

Second baseman Jon Koenig later reached second base on another dropped fly ball by the right fielder, but Dickmeyer got out of the inning without allowing another run.

Marek had his second hit of the game to lead off the eighth, but that was the last time the LoGators put a runner on base.

“We just couldn’t put together as many quality at-bats as I would like, and Dickmeyer is really tough,” Marek said. “He doesn’t throw particularly hard, but he throws a breaking ball at two different speeds and also has a very good changeup too. When you are dealing with a pitcher like that, he makes it tough to make good contact throughout the game.”

There were a few hard hit balls that could have made for big innings, but the Mudhens seem to always be in the right spot, besides two errors on bloopers to center field.

Puder had three lineouts, one ball that was just short of the big fence in center field. Nelson, Wilson and Marek also had line drives that stayed up too long for outs.

“It just wasn’t our day for those to drop in, and over the last month or so, it seemed like all of those have been falling in for us and finding gaps,” Marek said. “But that’s the game sometimes.”

“Winslow has been so good for us in the playoffs,” Marek said. “He has ice in his veins, and every time we have thrown him out in the playoffs, he has gotten the job done.”

Miesville moved on to play Chanhassen as one of the last four teams in the state tournament and lost 2-1, but the Mudhens are still alive with the final games being double elimination.

Champlin’s season came to a close after the team won its first state game and also had a dominant run to close the season to earn the second seed out of the Metro Minny League.

Besides the win over Victoria to open state, other highlights for the LoGators during their fifth straight state run, including a nine-run ninth inning Aug. 2 against Cold Spring in a 13-11 win and a 3-0 win over fourth-ranked Blaine.

The season also almost didn’t happen with the COVID-19 pandemic forcing the season to start in late May and the league season not beginning until June 30.

Back in April when no one was sure whether a season would happen, Marek had a Zoom call with everybody and everyone said they wanted to play. That led to full dugouts almost every game once the team could play.

And the year ended up being very fun with success on top of it, and that looks to continue in the future, Marek said.

Several college players with five years experience and a few players out of high school contributed this year with some of the older veteran players.

And with teams like Chanhassen, Miesville and Moorhead getting older, next season could be the chance for Champlin to make the Labor Day weekend games and potentially be a top-10 team in the state, Marek said.

“We are really excited for the years to come,” Marek said. “I think we have gotten better each of the last few years, and with the team makeup right now, I think we can keep getting better.”