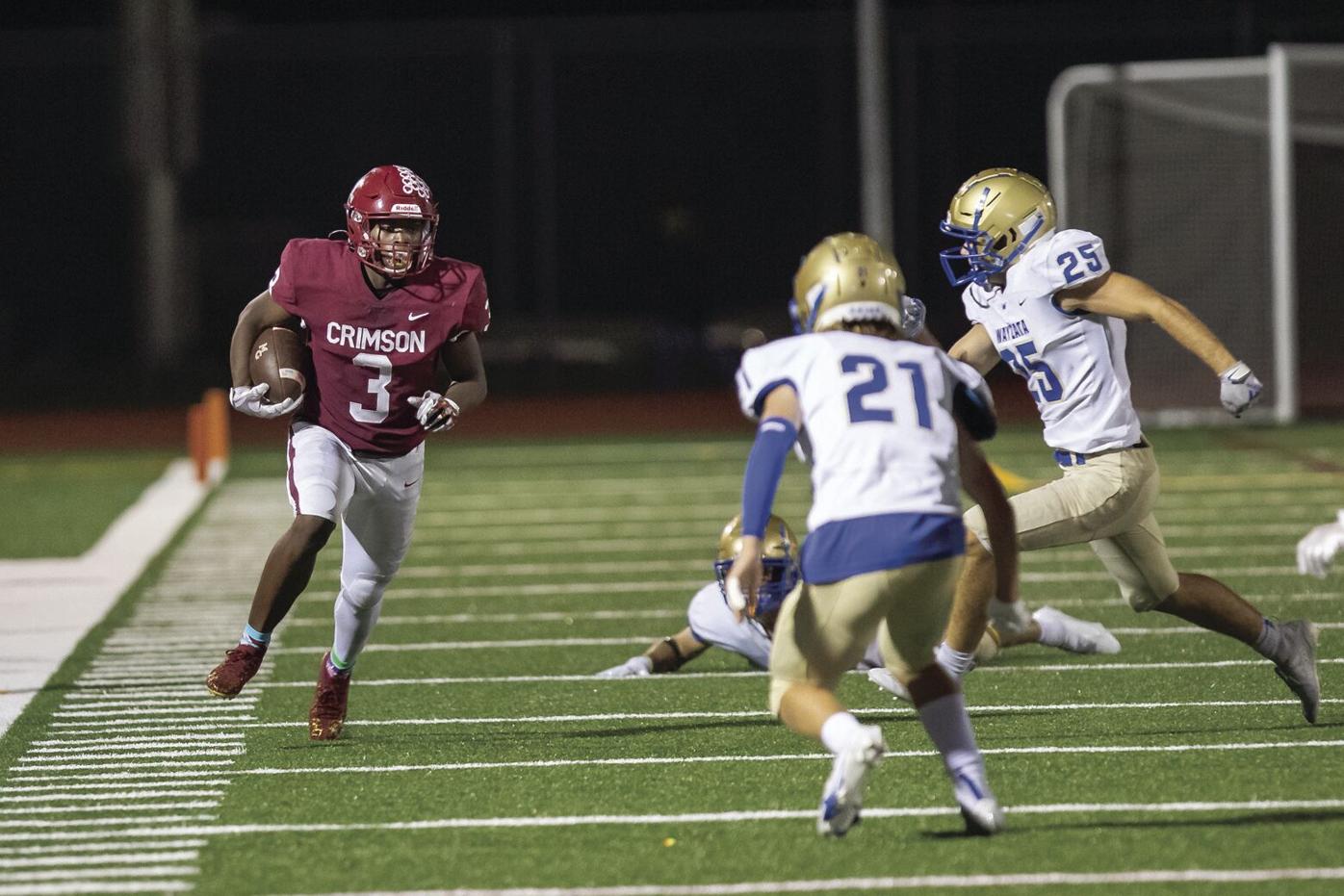 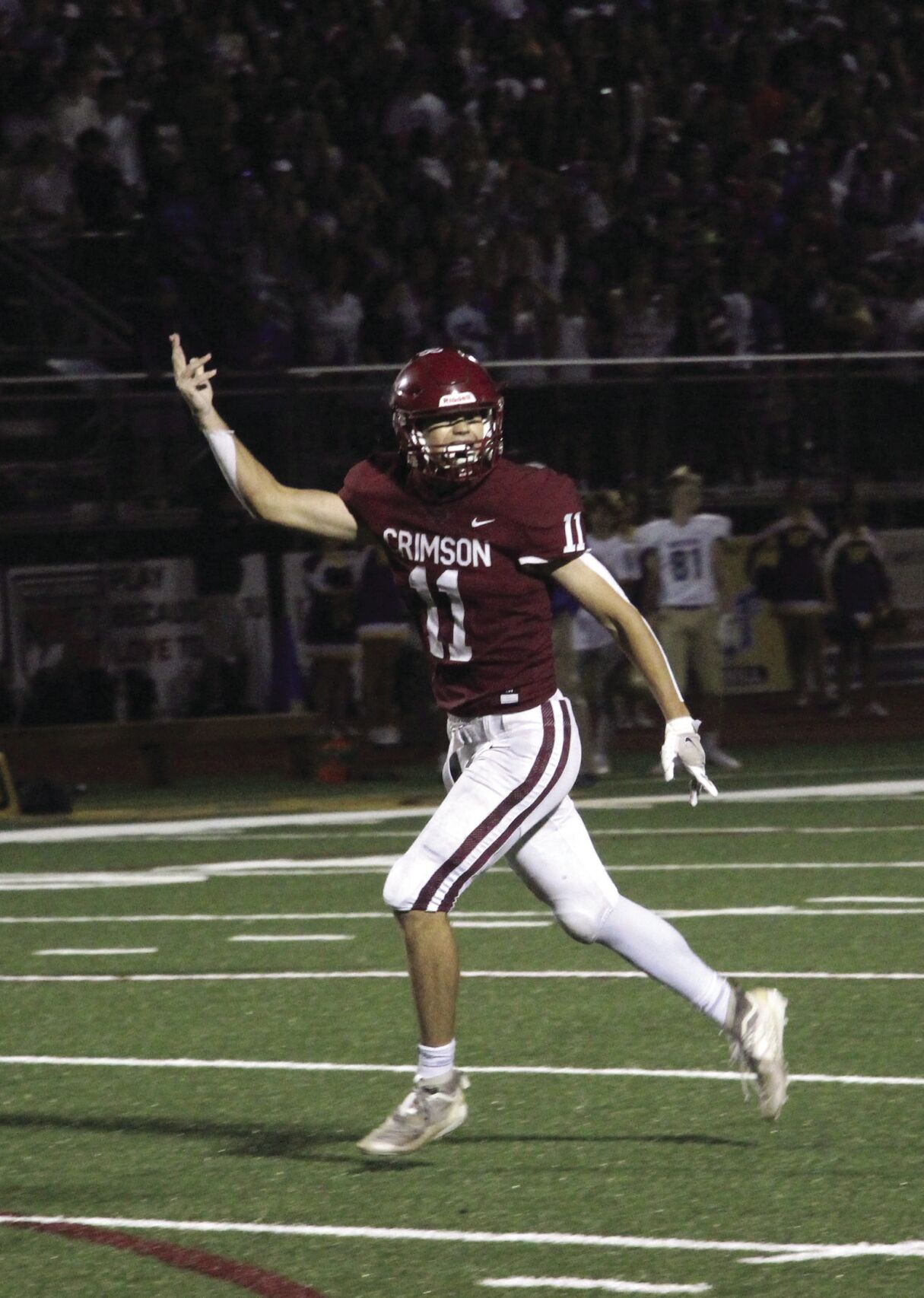 Maple Grove senior wide receiver Cole Newell celebrates his touchdown pass on a double-pass trick play to junior quarterback Jacob Kilzer against Wayzata. “We went out there and executed it to perfection. I was hoping to get it to a spot where Jacob could catch it and get in the endzone. I couldn’t really think,” Newell said. (Photo by Sam Johnson) 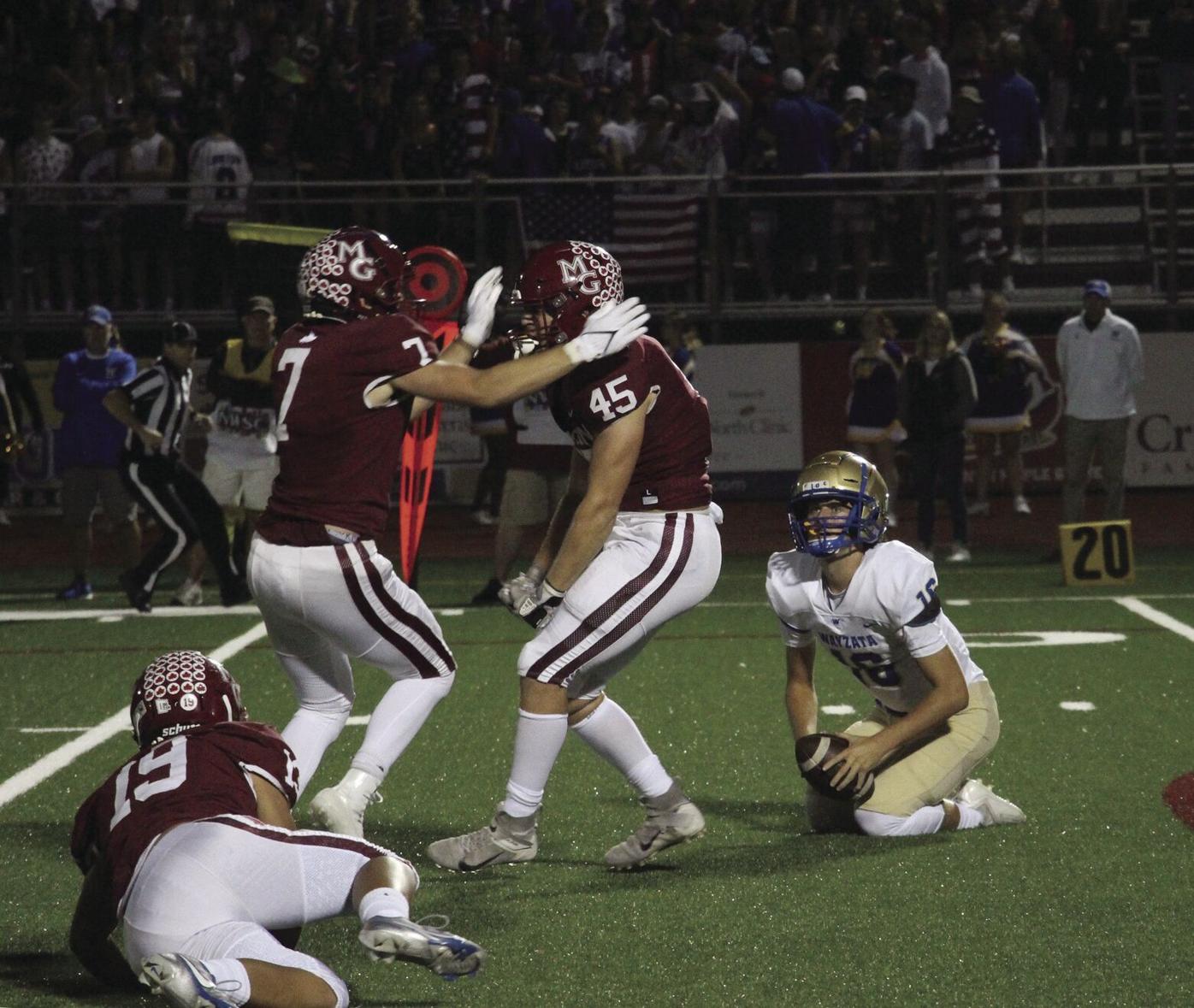 Maple Grove senior wide receiver Cole Newell celebrates his touchdown pass on a double-pass trick play to junior quarterback Jacob Kilzer against Wayzata. “We went out there and executed it to perfection. I was hoping to get it to a spot where Jacob could catch it and get in the endzone. I couldn’t really think,” Newell said. (Photo by Sam Johnson)

Maple Grove needed a spark. Midway through the third quarter of the Friday, Oct. 8 football contest, fifth-ranked Wayzata held a 3-0 lead that felt bigger than merely three points. Up until the last two seconds of the first half, where Wayzata kicked a 33-yard field goal, the scoreboard remained barren, with both defenses locking the opponent’s offense up.

So on a third-down backed up at their 16-yard line, the Crimson were looking for some way to flip the field and regain some of the momentum they felt at the beginning of the homecoming night. Enter Derrick Jameson. As junior quarterback Jacob Kilzer took the snap, he rolled briefly to his left, then subtly handed his senior running back the ball on a delayed draw.

What happened next was nothing more than athleticism personified. Jameson accelerated to the down the right sideline and gained the first down. And then he kept running, as he continued down the sideline, he saw a group of Trojan defenders cut him off, so Jameson cut to his left and veered towards the center of the field.

As the capacity crowd roared and the bleachers shook so loud people on the sidelines could hear the rattle, the three-sport athlete used his electric speed to separate himself from any Trojan in the secondary and break free for an 84-yard touchdown run.

In one remarkable play, Maple Grove grabbed the lead and, even though there was more than a quarter to play, all the momentum, which led to a 21-3 Crimson win.

“The play Derrick made was a pretty impressive individual play that spurred the confidence in the kids and caught momentum from that point on,” Maple Grove head coach Matt Lombardi said.

After a bad snap on a fourth-down punt from Wayzata, Maple Grove added to their lead in the final minute of the third quarter, with their version of the famous Super Bowl play dubbed the “Philly Special.” Kilzer took the snap and handed the ball off to Jameson, who then pitched it to wide receiver Cole Newell, who played quarterback for the last three years, and he found a wide-open Kilzer in the end zone for a touchdown and a 14-3 lead.

Lombardi said after Tuesday’s practice, he wanted to reinvigorate the guys, so they spent 10 minutes on Wednesday designing trick plays, like the double-pass touchdown. “One of the strongest parts of our team is that we have a ton of multi-sport athletes,” Lombardi said. Newell, a pitcher on the varsity baseball team, was prepared for the surprise play. “We went out there and executed it to perfection,” Newell said. “I was hoping to get it to a spot where Jacob could catch it and get in the endzone. I couldn’t really think.”

Then to cap off the scoring, in the fourth quarter, Jameson took a third-down direct snap at midfield and ran untouched to the endzone, putting a bow on his 165-yard night. But what was maybe more impressive than the second-half offensive attack was the Crimson defense, which held a Trojans offense that had averaged over 26 points per game to only three.

“Our defense was just amazing,” Newell said. “They created our momentum.” All night, they applied pressure to make senior quarterback Ryan Harvey uncomfortable and silenced talented senior running back Julian Alfaro Diedrich. “Stopping the run was key,” senior linebacker Sawyer Skanson said, who recorded a team-high 16 total tackles. “We wanted to shut down the run, make them throw the ball, and let our corners go to work.”

“I am the proudest of the defense,” Lombardi said. They will learn that as the playoffs come, this is how a lot of games will go. You have to weather the storm.” When the offense couldn’t get going in the first half, it was the defense that kept the Crimson in the game. “It is unbelievably critical to have a strong defense. You can never guarantee your offense will be clicking but I believe you can be sure about your defense. Your defense can be on every week even if your offense isn’t,” Lombardi said.

A big motivating factor for many Maple Grove players and coaches is still their loss to Centennial two weeks ago. And while they aren’t able to re-play the game, they are learning from their mistakes, which they hope will only improve their play going forward. “We learned the most from the Centennial game,” Skanson said. “We learned to hit hard and hit them in the mouth. I think it really showed against Wayzata.”

Lombardi preached the importance of physicality after the loss to Centennial and thought his group rose to the challenge against a top-five opponent in Wayzata. “I thought our defense was much more physical,” he said. “Physicality comes from confidence. If you’re willing to use your feet, that shows if you’re physical.”

One key cog of the defense took a hit during the second half, however. Senior linebacker and captain Aiden McMahon went down to the ground after what Lombardi called a non-contact injury. McMahon will get an MRI but right now, the team is unsure what his long-term status will be.

“Aiden is the leader of our defense,” Lombardi said. “That is a big hole for us, but our kids will step up.”

Next up for the Crimson is senior night and a match up with St. Michael-Albertville. The Knights sustained a few early-season injuries, but are getting healthy at the right time and present a challenge Lombardi says is similar to that of Centennial and Wayzata. “They have a lot of size, and are a physical downhill team,” he said. “It is good for us to see those teams because you look at the top teams, and they all play like that. We look forward to playing them.”