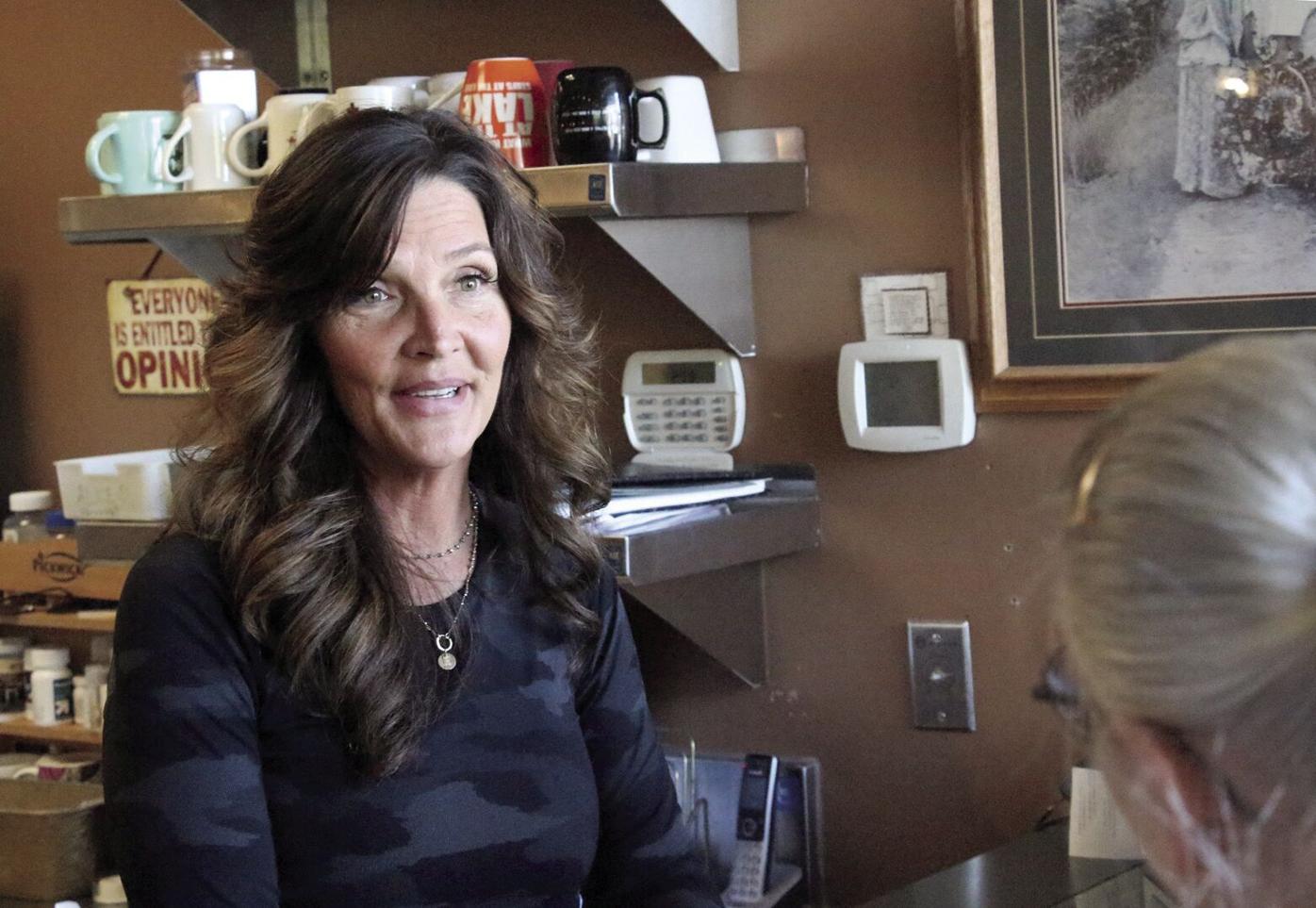 Melissa Hudy, owner of Hudy's Cafe in Champlin, checks a customer out at the front desk. She thinks that roughly 80% of the cafe’s clientele are people she would call “regulars,” with 40% coming in five days a week. (Photos by Sam Johnson) 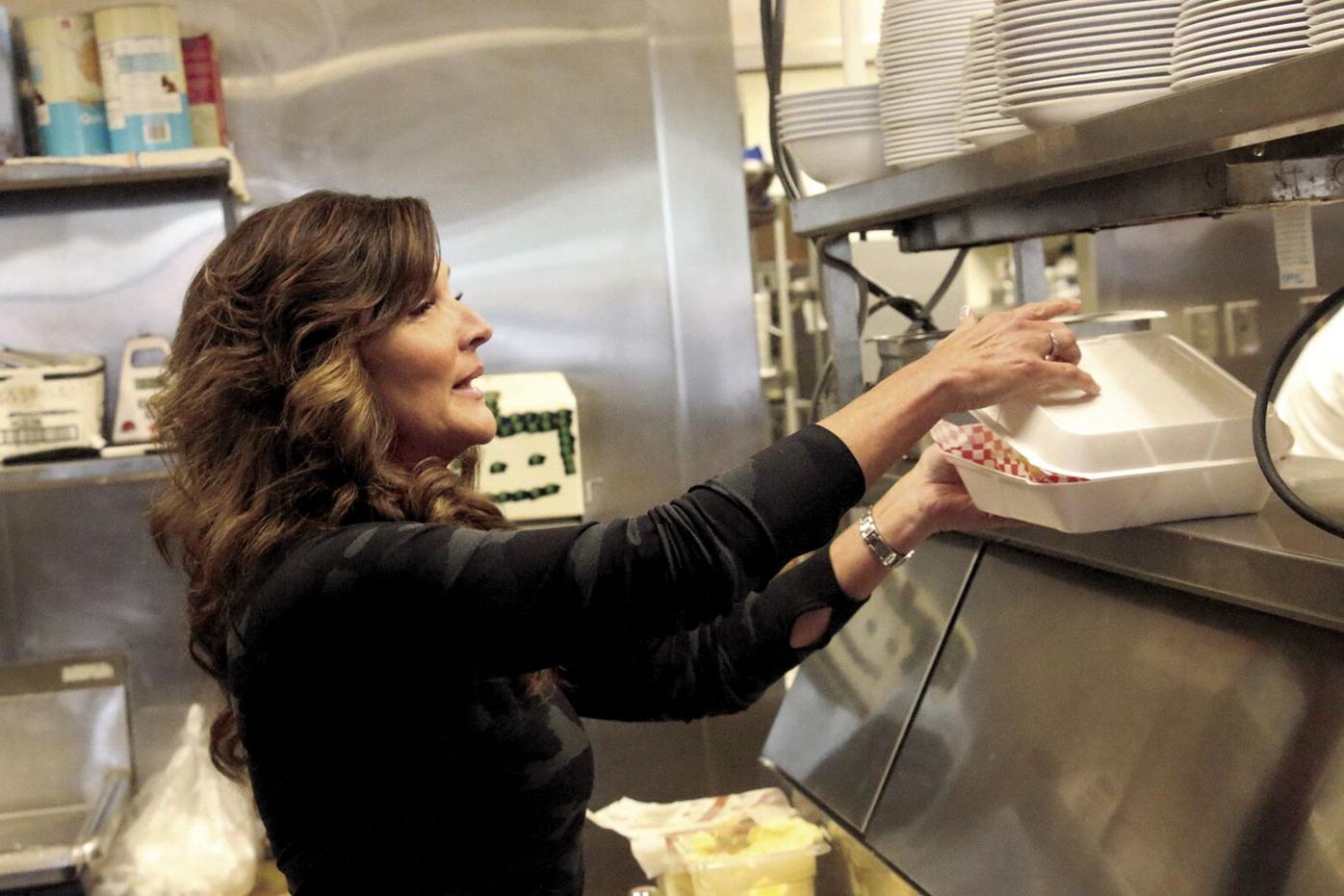 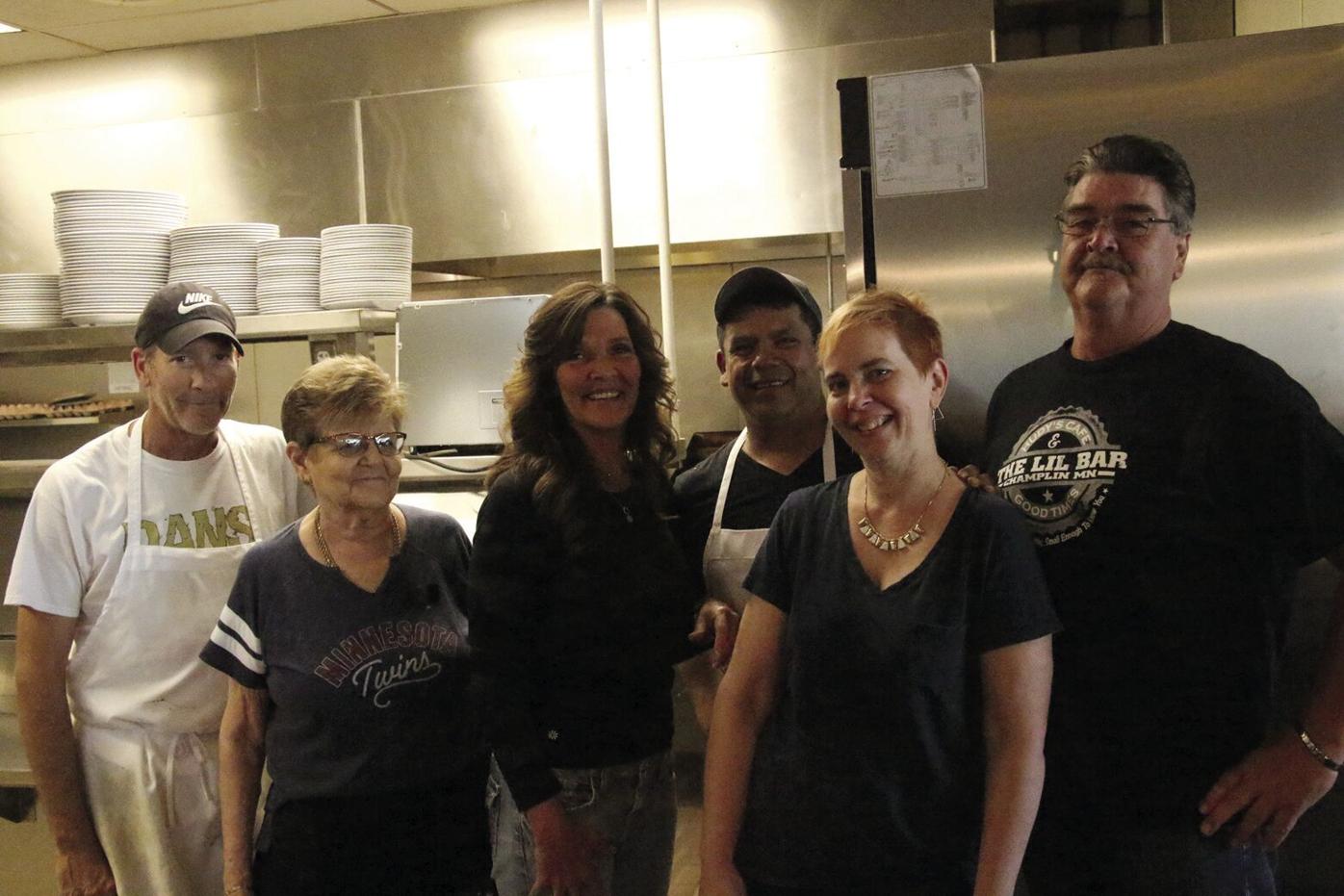 Melissa Hudy (third from the left) with her cafe and bar staff. In the last month, Hudy said they have returned to a full staff of 21 employees for the first time since the pandemic started. 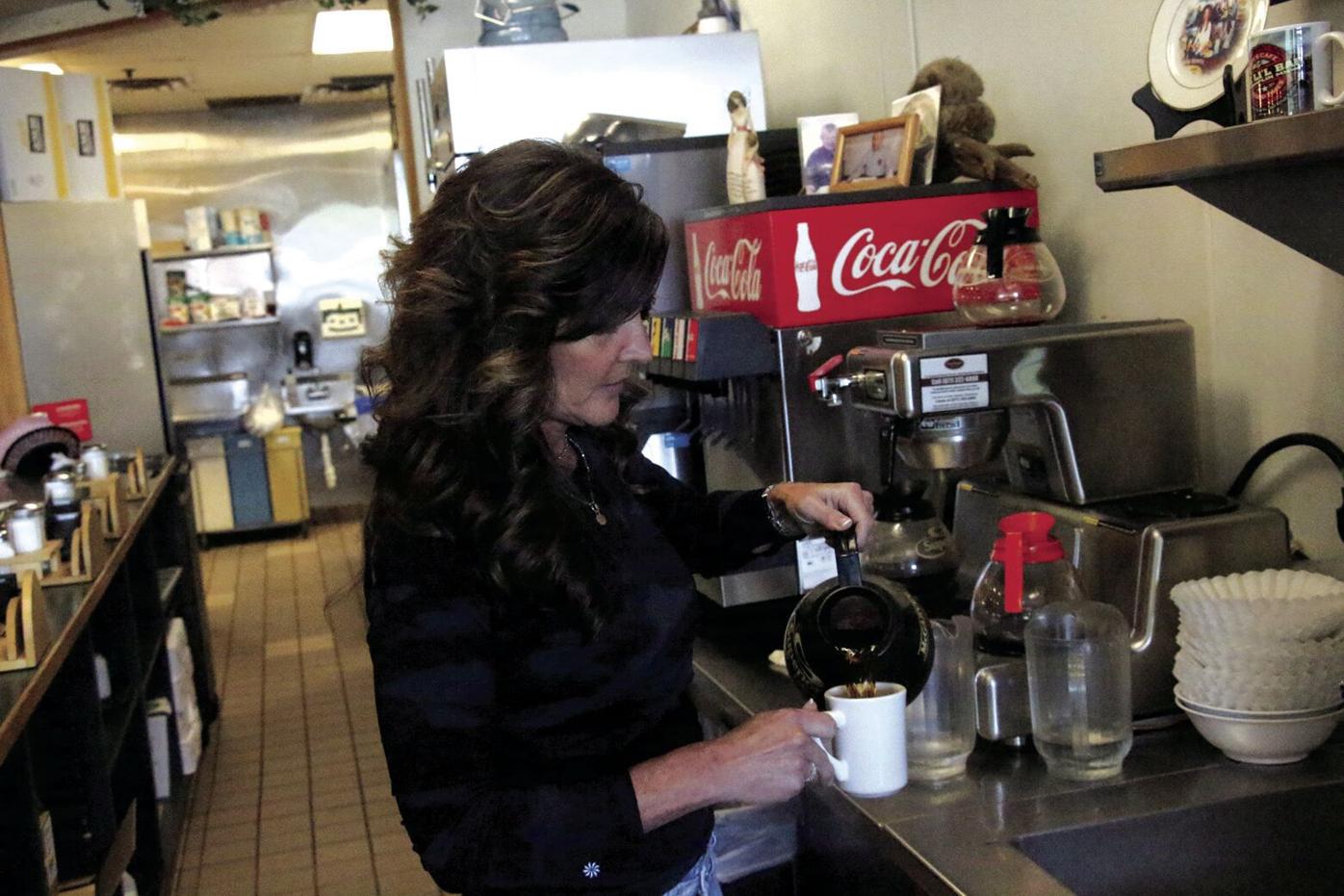 Champlin Hudy’s owner Melissa Hudy pours a cup of coffee in the afternoon. “Champlin has been extremely wonderfully patient with me. They give to me and I give back to them,” she said.

Melissa Hudy, owner of Hudy's Cafe in Champlin, checks a customer out at the front desk. She thinks that roughly 80% of the cafe’s clientele are people she would call “regulars,” with 40% coming in five days a week. (Photos by Sam Johnson)

Melissa Hudy (third from the left) with her cafe and bar staff. In the last month, Hudy said they have returned to a full staff of 21 employees for the first time since the pandemic started.

Champlin Hudy’s owner Melissa Hudy pours a cup of coffee in the afternoon. “Champlin has been extremely wonderfully patient with me. They give to me and I give back to them,” she said.

Hanging on a wall by the bar inside Hudy’s Cafe and Li’l Bar in Champlin are slogans that reflect the character of the longtime community business. One phrase, in particular, stands out to owner Melissa Hudy: “You walk in as strangers, you leave as friends.”

For the last 22 years, Hudy, 49, has had the opportunity to become friends with hundreds of customers, serving them breakfast and coffee every morning.

In 1999, Hudy, who started working in the restaurant business at age 13, asked her husband what it would look like to own her own place, instead of being a waitress at a restaurant. At that time, a strip mall was being built off Highway 169 and 114th Avenue, and Hudy, 27-years-old at the time, wanted to start a cafe in the former rural pasture. He thought she should go for it, and after getting approval from the city, she said it felt like, “The next day, I was pouring a cup of coffee.”

With the excitement of starting a new business came the fears of the unknown. But Hudy didn’t let worry stop her from pursuing her dreams. “I never thought of failure,” she said. “I wasn’t scared.”

The first Saturday the cafe was open, Hudy noticed a line of people waiting 45 minutes out the door to eat at Hudy’s Cafe and she looked over to her brother, Terry, and started to cry. Terry leaned over to Melissa and told her, “I ain’t nothing but a thing,” something that is said by staff and customers to this day.

From the first weekend, Melissa knew this venture would be successful. For the first 15 years of the business, there wouldn’t be a weekend where the line didn’t go out the door. Regular customers would spread the word of the cafe, and before Hudy knew it, she would see a mix of her usual clientele that would eat there five days a week and faces she had never seen before.

For the first decade and a half, Hudy’s Cafe shared a building with Farmers Insurance. Seven years ago, Farmers Insurance closed and an opportunity presented itself for Hudy. Up at her cabin on Big Sandy Lake in McGregor, she sat with her husband around the bonfire and came up with an idea to fill the void of the insurance company: start a neighborhood bar, which would be called the Li’l Bar. “Once I had the idea, I just did the next step and the next step and before I knew it, there I was,” Hudy said.

The longtime waitress went from pouring coffee to shaking martinis. “That was really different,” she said. With no previous experience working at bars, Hudy turned to her customers for advice on how to make specific drinks. “When I started pouring shots, I was like ‘how do you make that?’ I would ask the customers how to make a specific drink,” Hudy said. “I still do.”

Not only did the new bar provide an outlet for people to come and enjoy a glass of wine with dinner or a late-night drink, but it also allowed for overflow seating for the cafe.

Six months after Hudy opened the Li’l Bar, the local American Legion closed. Nearly a dozen men who attended the Legion for 40 years were now looking for a new spot to hang out and enjoy company.

Hudy said one man came in by himself, enjoyed his time, and brought with him another man the second time. Within two weeks of the Legion shutting down, Hudy saw the veterans show up for happy hour drinks every day. “The Li’l Bar was everything I wanted it to be,” Hudy said. “That place where you have your regulars every day for happy hour.”

During her two decades-plus of operating the cafe and bar, Hudy has grown close with hundreds of her customers. She thinks that roughly 80% of the clientele on the cafe side are people she would call “regulars,” and of the regulars, 40% come in five days a week, some even twice a day. “You get a lot of friendships from the people you meet here,” Terry said.

“Every time the regulars that have come for the last 22 years walk in here, I think of that first Saturday,” Hudy said, who often goes on vacations with her customers. “They might come over and eat breakfast, and then come back later for a cocktail. The Li’l Bar has created a ton of friendships. They are family.”

The thing about regulars is that they often order the same dish, which makes it easy for Hudy to remember, but she wants them to occasionally shake it up. “You can only have a ranch breakfast so many times,” she said. “Try a benedict.” Her favorite on the menu? Melissa’s Favorite Benny, which is an eggs benedict with an English muffin, cream cheese, smoked bacon, poached eggs, all smothered with hollandaise sauce. According to Hudy, it is served best with American fries and a side of one pancake. “It is amazing,” she said.

Like all local restaurants, Hudy’s Cafe and Li’l Bar felt the effect of the COVID-19 pandemic. When forced to shut down in-person service, Hudy wasted little time adapting to the circumstances. Hudy, her son Cody, 31, and Terry, the only three employees working at the time, were busy cooking all the food, working the take-out service, and grocery shopping. “We never stopped,” Hudy said. All in the name of their customers. Their family.

“I felt so bad for my customers,” Hudy said. “It was awful.” But amid challenges, silver linings appear. Before the pandemic, Hudy’s didn’t have an outdoor patio, so one day, a customer dropped off a table, set it by a handful of benches, and asked if it would be possible for Hudy to serve them coffee and breakfast outside. With heaters hooked up and placed under the table in the cold spring weather, Hudy grabbed a pot of coffee and served them breakfast in a to-go box. Every day they were open, people would sit at that table.

Operating a business during the last 18 months has taught Hudy a lot about perseverance. As someone who didn’t graduate high school and never went to college, Hudy knows all about rising above the challenges and pursuing her dream. So what has brought her the most joy over the past 22 years? “That I just kept going and I succeeded. If it was easy, everyone would be doing it.” Just in the last month, Hudy’s returned to a full staff of 21 employees for the first time since the pandemic started.

Over the past few years, Hudy has transitioned out of the long-hour working days like when she started the business, mostly to prepare her son, Cody, to take over the operations. Since he was 11-years-old, Cody, the eldest of Melissa’s two sons along with Blake, 19, has worked at the cafe and within the next five years, will be taking over for Melissa. “Cody is an old soul just like me,” she said. “And people just love him.”

But for now, customers can still see her working mostly in the bar three days a week, doing what she loves the most: creating meaningful relationships through her business. “Champlin has been extremely wonderfully patient with me,” Hudy said. “They give to me and I give back to them.”