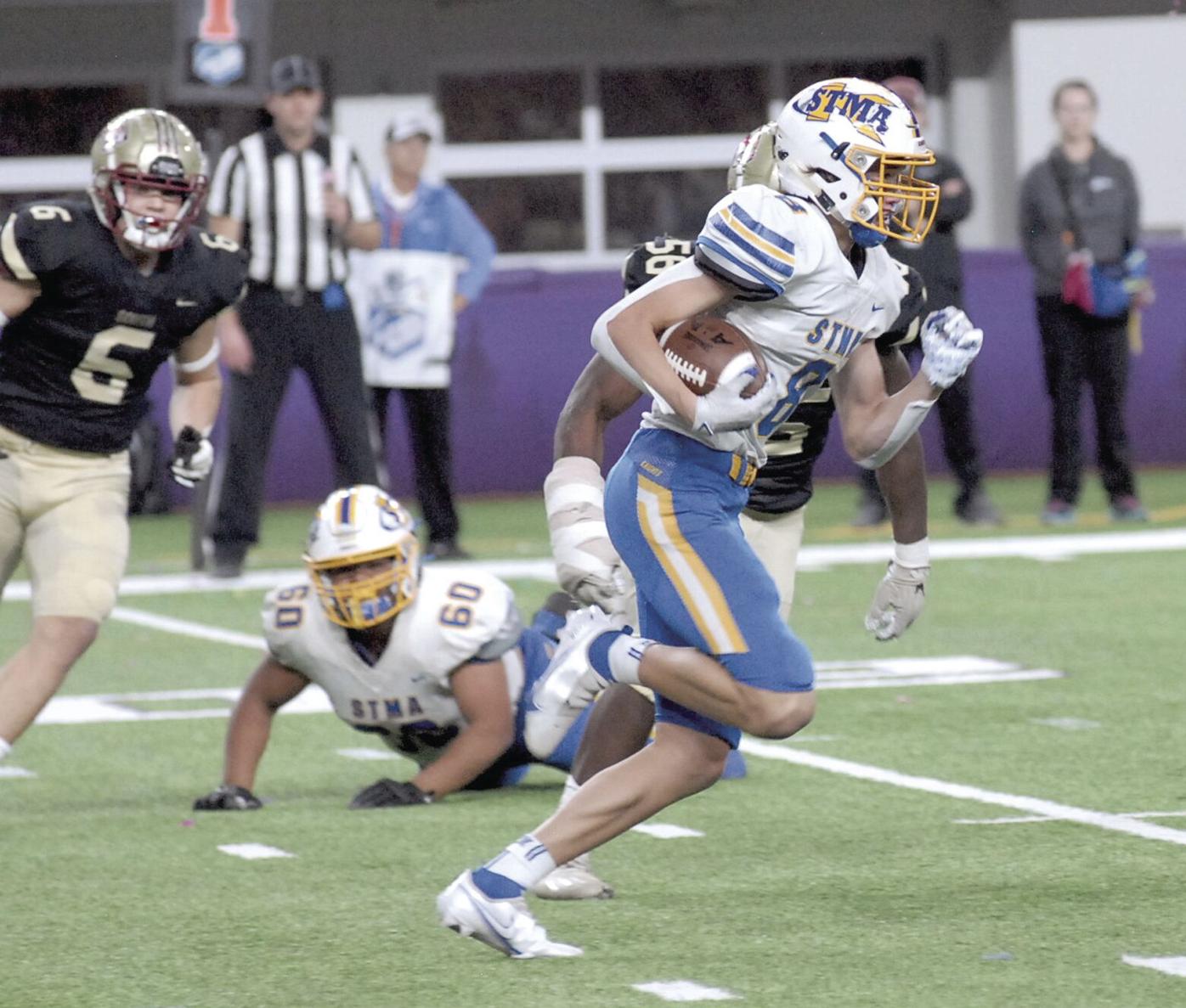 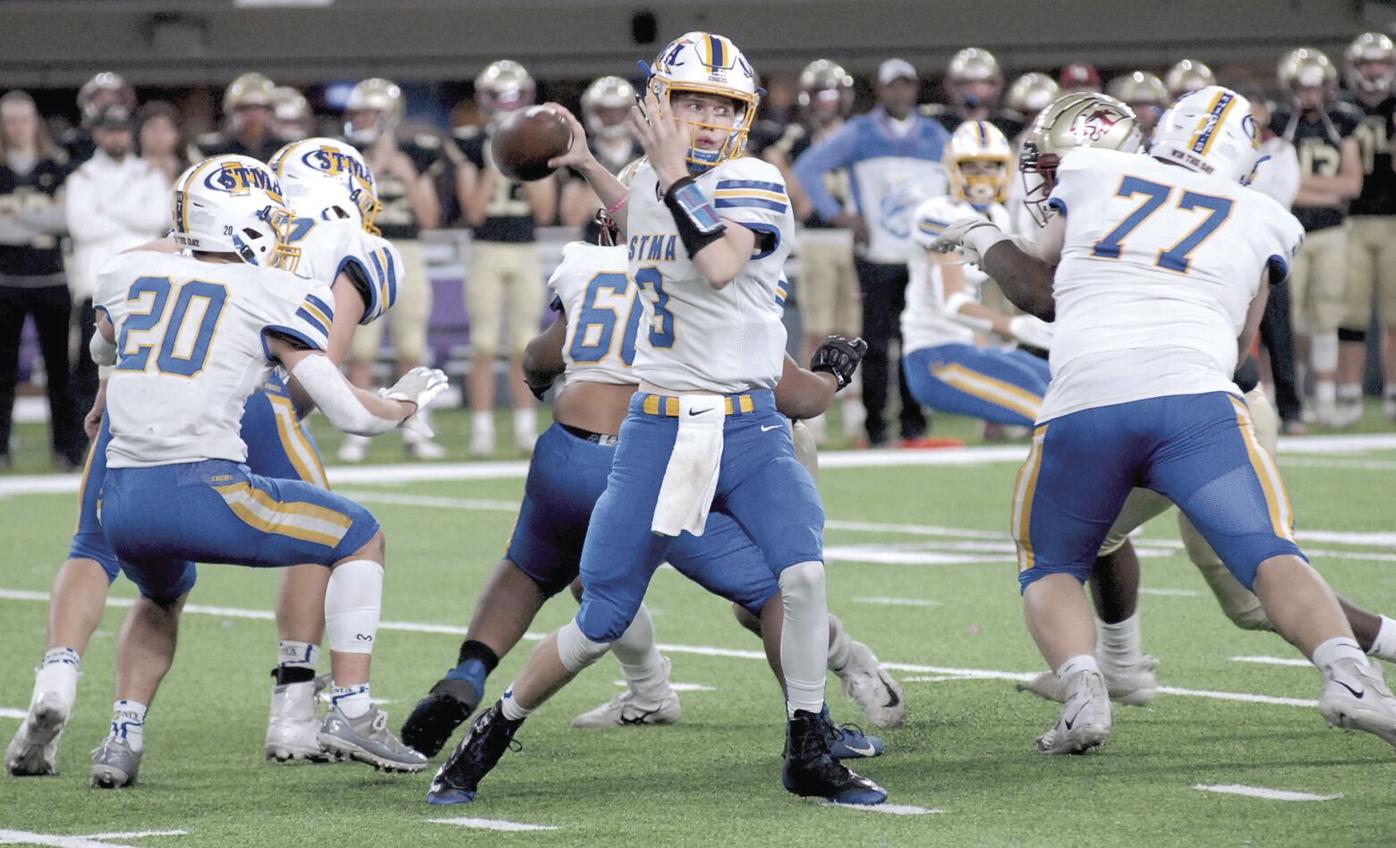 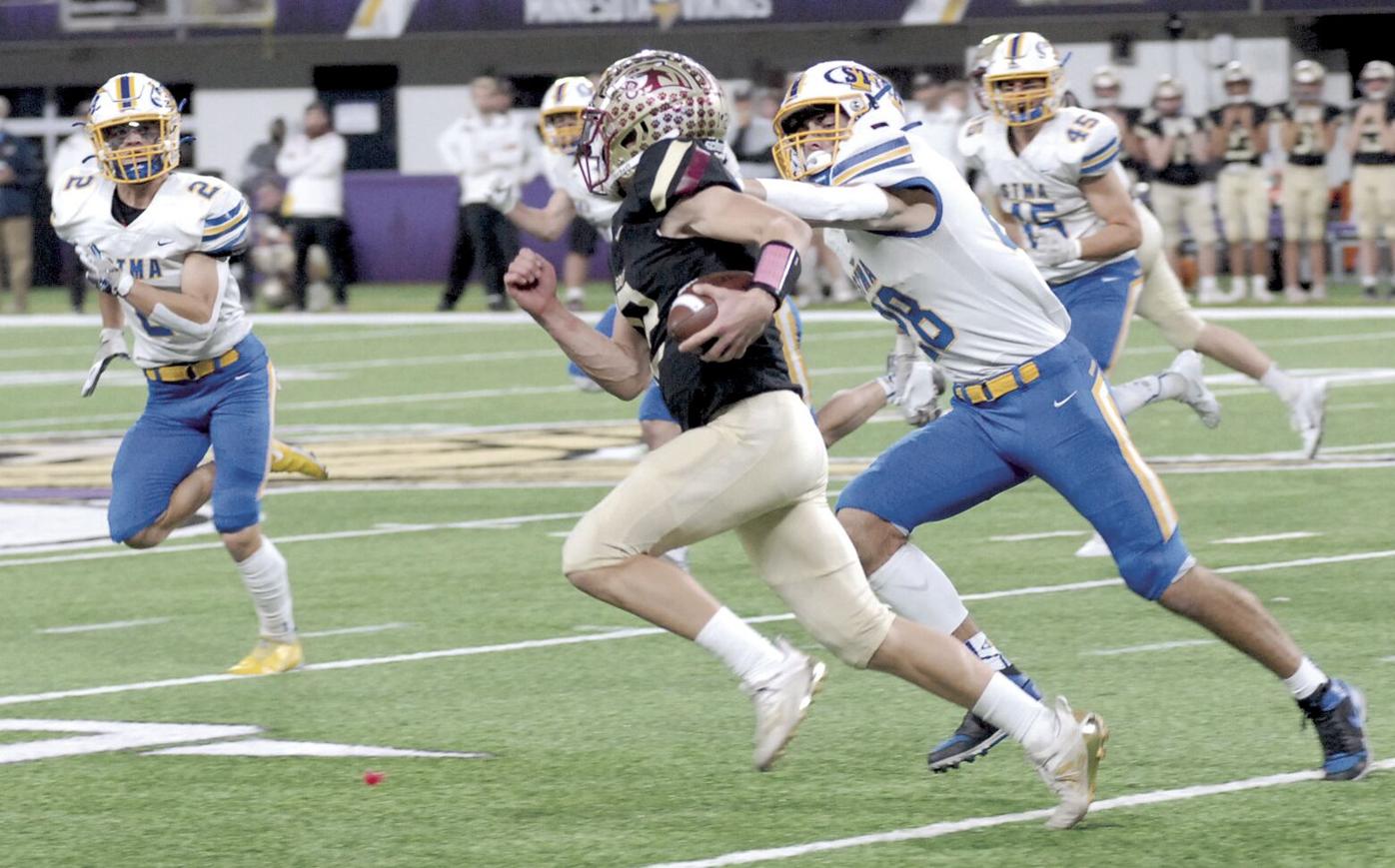 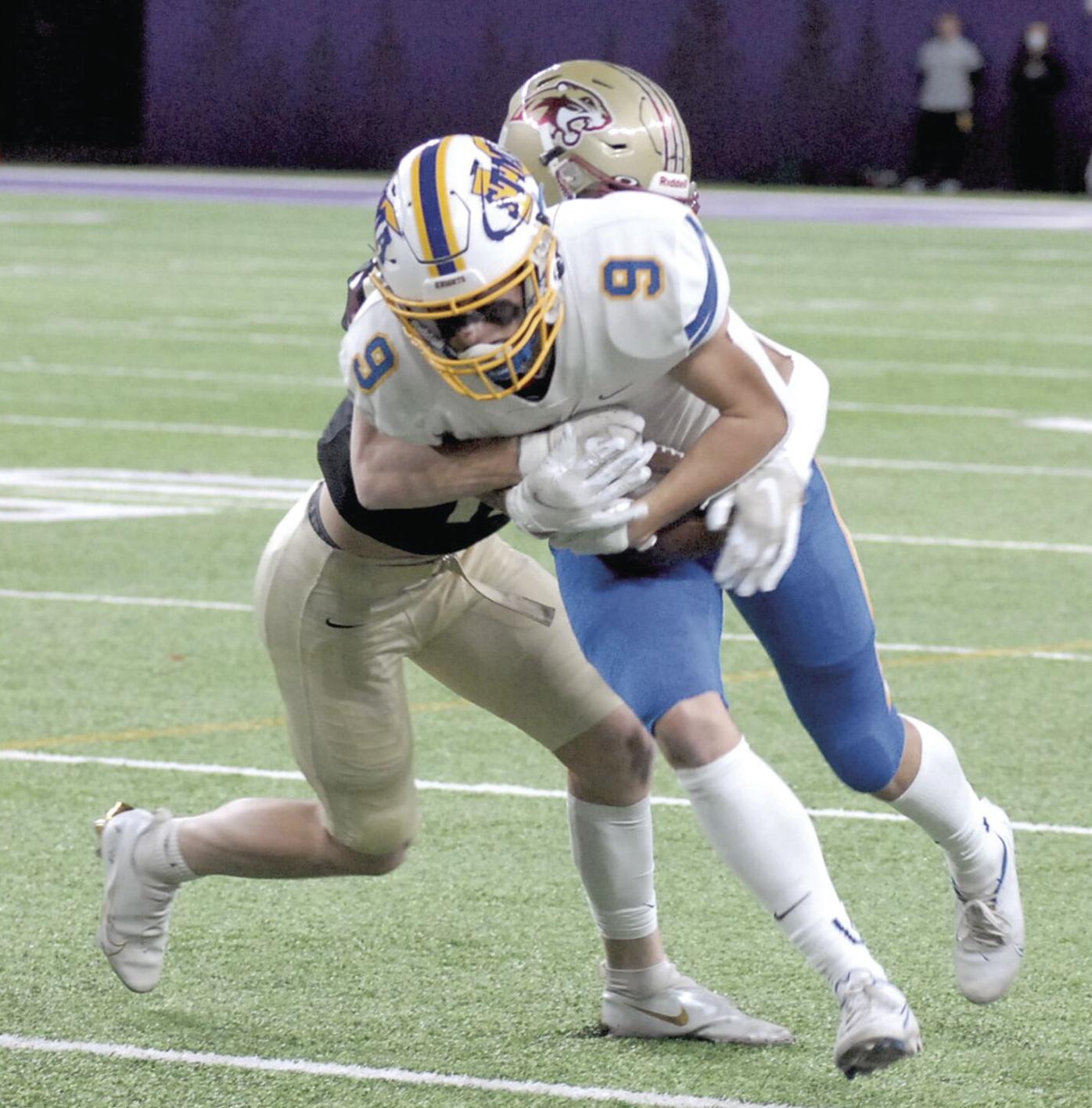 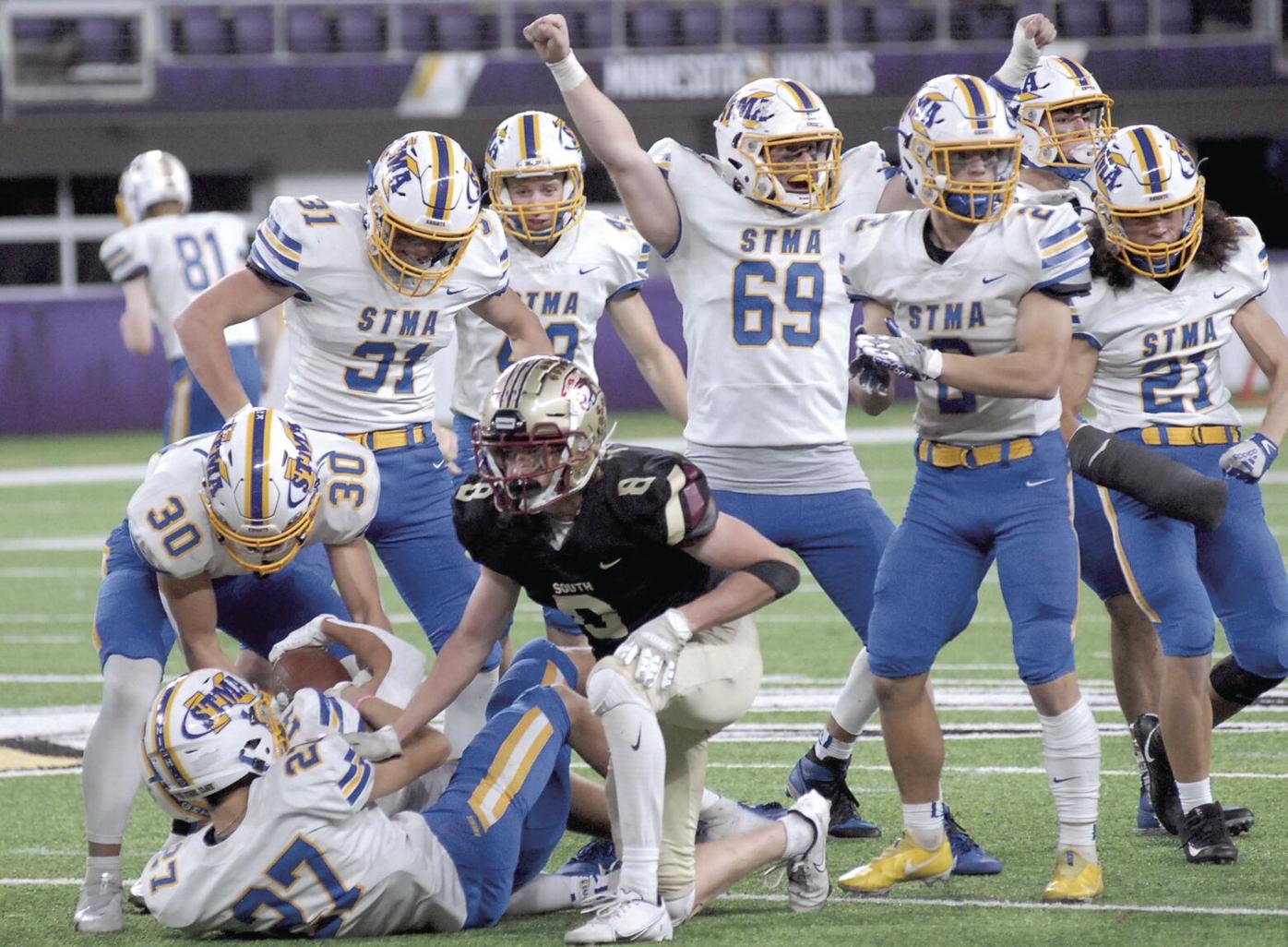 STMA recovers onside kick. I believe No. 14 (Cowin Underwood) wound up with the ball.

STMA recovers onside kick. I believe No. 14 (Cowin Underwood) wound up with the ball.

The STMA football team ran into a brick wall Friday night, Nov. 19, at US Bank Stadium, losing 40-14 to the Lakeville South Cougars.

Turnovers were the name of the game for the Knights. Early on, it seemed like they could hang with the undefeated Cougars as they started the game with a solid drive, picking up a couple of first downs and grinding the clock. After all, in 2020, the two teams had played an instant classic with the Cougars edging the Knights 14-13 in a truncated season’s finale.

However, the Cougars forced a fumble at STMA’s 40-yard line on a fourth and one. Two plays later, Carson Hansen took off around the left edge for a 37-yard touchdown to make it a 7-0 game.

The Knights fumbled the ball away even deeper in their own territory on the next drive, giving it up at the 31. Hansen scored on a similar play to the first and STMA suddenly found itself in a 14-0 hole in the opening quarter.

Things got no better in the second quarter as Chase Androff caught a touchdown to make it a 20-0 game. The Knights fumbled the ball away a third time in the opening half, which led to Hansen scoring a third touchdown, this time through the air, to make it 27-0.

Some STMA fans headed for the exit gates at US Bank Stadium when Ian Segna scored his team’s fifth touchdown of the evening in the third quarter. The Knights could not get much going on offense, which only led to Hansen scoring his fourth touchdown of the contest, making it a 40-0 affair.

In the fourth quarter, the Knights finally got on the scoreboard when Connor Luongvan ran for a three-yard touchdown. Later in the quarter, Owen Neros hit Rylan Maynard for a 12-yard touchdown to make the final score 40-14.