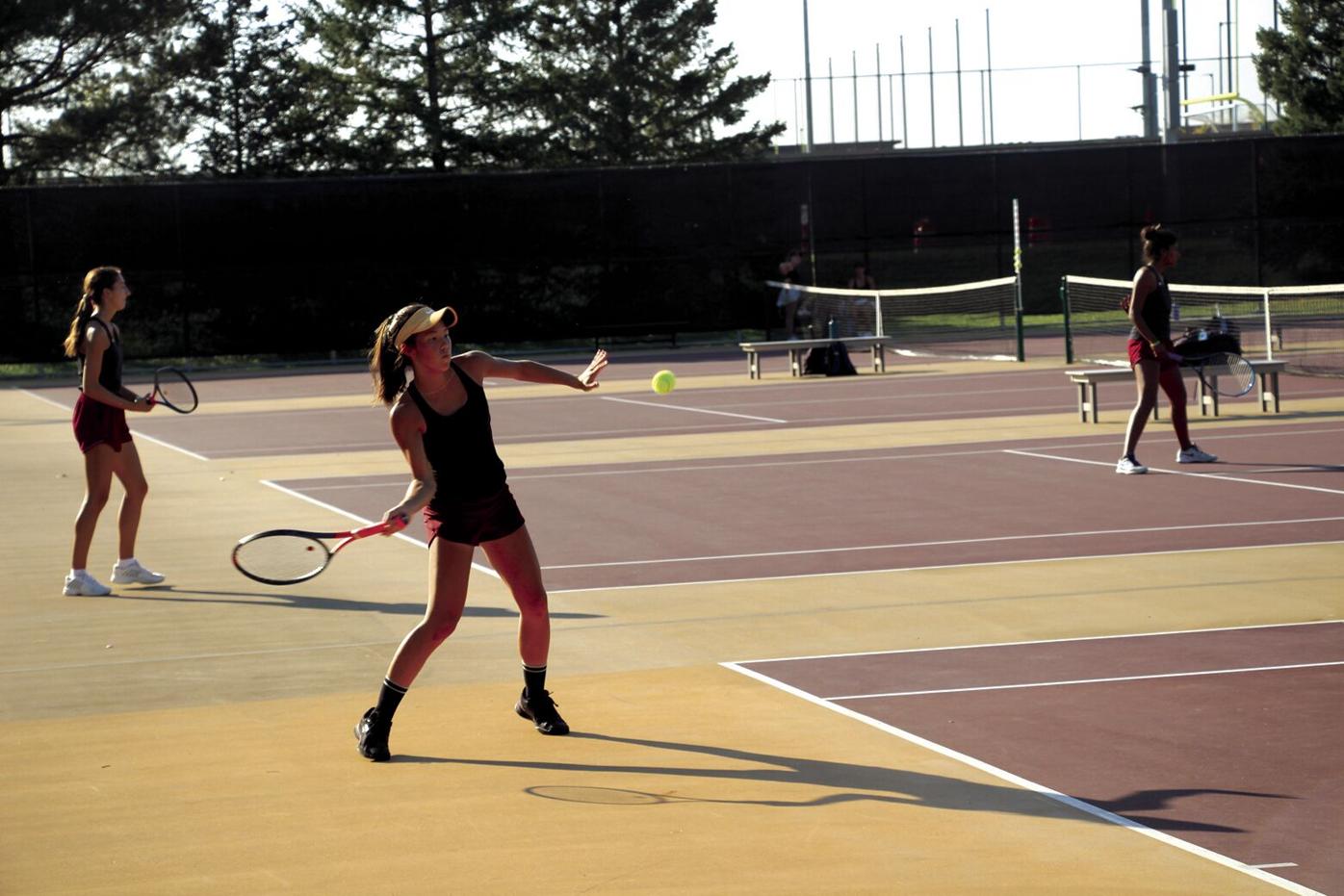 Maple Grove's Zoe Adkins hits a forehand shot during her varsity match against Rogers on Sept. 28. For the last six years, Adkins has been the number one singles player for the Crimson and hasn’t lost a match in nearly two years. (Photo by Sam Johnson) 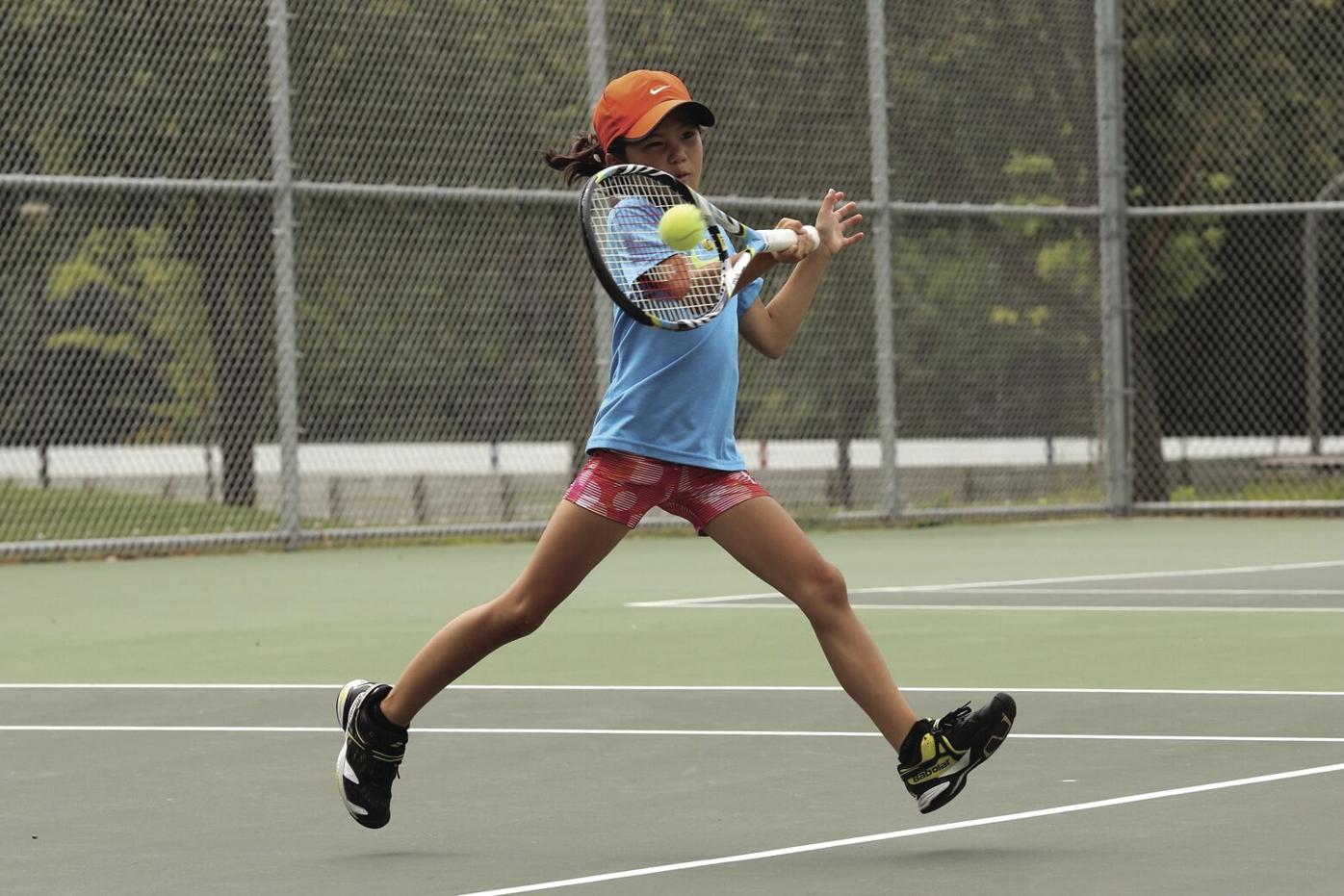 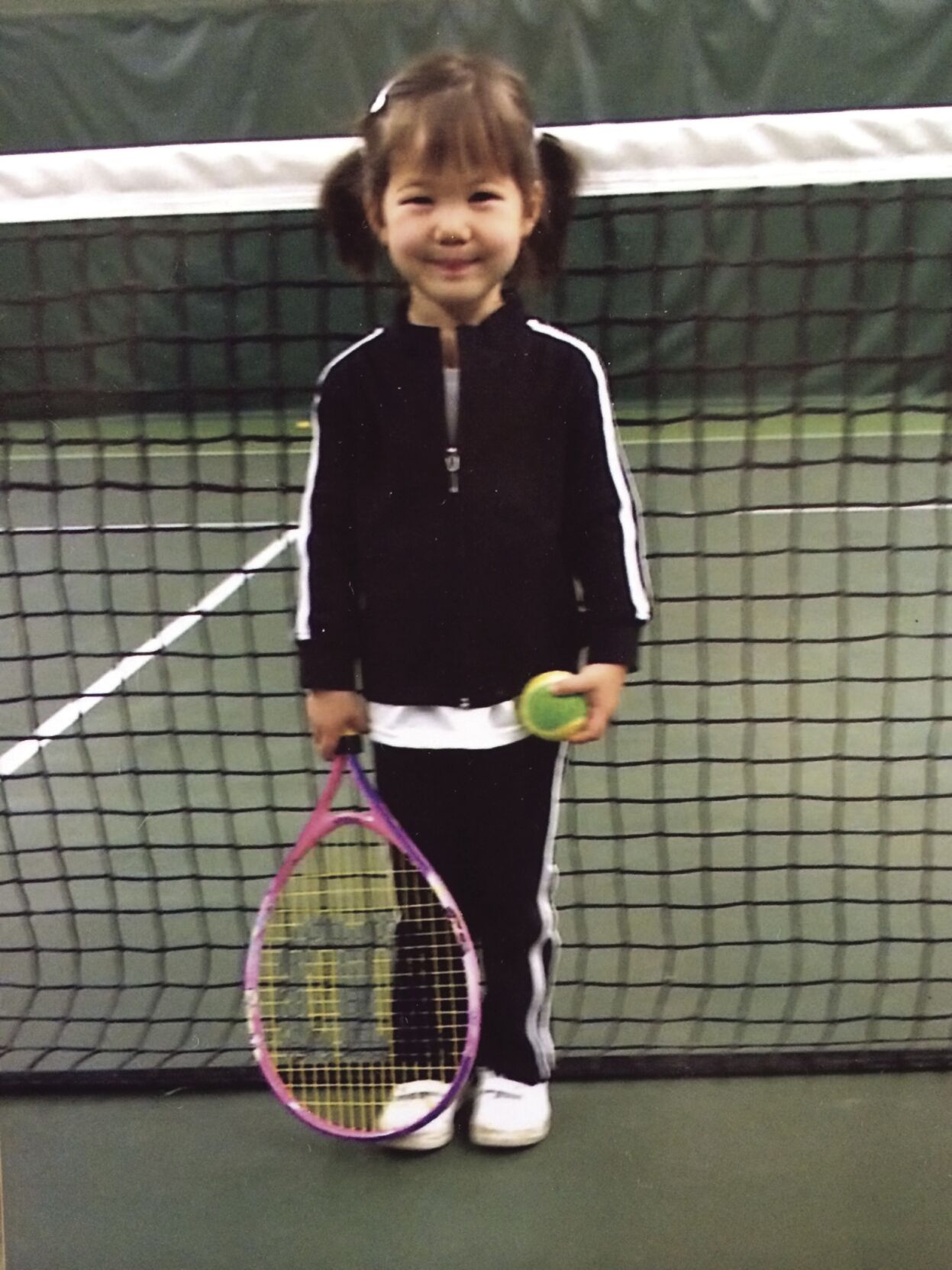 Four-year-old Zoe Adkins stands holding a tennis ball and racket by the net. Adkins began playing the sport at that age, learning from her two older brothers, Zach and Charlie. (Photo courtesy of Zoe Adkins) 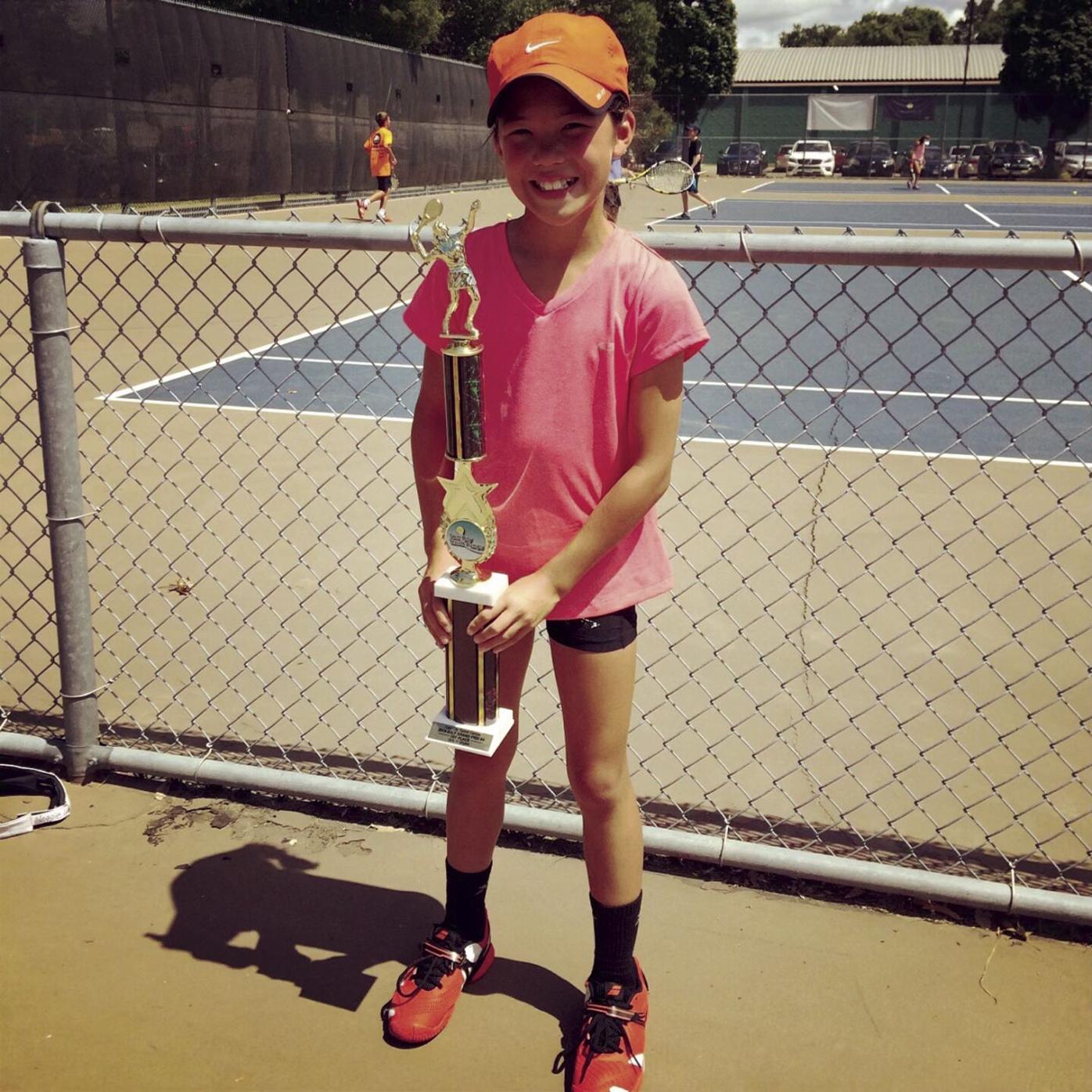 Zoe Adkins holds her first-place trophy at a 12-and-under tournament. The thing is, she was only nine years old. (Photo courtesy of Zoe Adkins)

Maple Grove's Zoe Adkins hits a forehand shot during her varsity match against Rogers on Sept. 28. For the last six years, Adkins has been the number one singles player for the Crimson and hasn’t lost a match in nearly two years. (Photo by Sam Johnson)

Four-year-old Zoe Adkins stands holding a tennis ball and racket by the net. Adkins began playing the sport at that age, learning from her two older brothers, Zach and Charlie. (Photo courtesy of Zoe Adkins)

Zoe Adkins holds her first-place trophy at a 12-and-under tournament. The thing is, she was only nine years old. (Photo courtesy of Zoe Adkins)

Zoe Adkins is living proof that in sports, size doesn’t always matter. Regardless of her five-foot, three-inch, 115-pound statue, the tennis phenom is one of the best athletes in the area. Always stepping foot onto the court decked out in a gold Nike visor, black top and crimson-colored shorts, the Maple Grove senior’s time in the varsity program is nearing its end after six years as the number one singles player.

At 4 years old, Zoe started playing tennis two times a week, all the while looking up to her two older brothers, Zach, 25, and Charlie, 23, who also played the sport, for motivation to pursue tennis even further.

“My brothers were my main inspiration,” Zoe said. “I thought, ‘this is what I could do when I get older.’ They showed me what was possible.” Along with tennis, Adkins tried other sports like skating and gymnastics, but by age eight, she started competing in tennis tournaments, diving headfirst into her favorite activity with motivation to get better each time she stepped foot on the court. “I said, ‘I wanted to play this until I get really old,’” she said. “I can see myself playing for a long time and getting good. I didn’t put limits on myself.”

On the tennis court, no matter who the opponent was, odds were Adkins would be physically smaller. Not as tall, not as big or strong. But even with her bodily limitations limiting her ability to make offensive shots, like a four-foot, seven-inch, and 60-pound frame in seventh grade, Adkins found a way to be successful.

“Against bigger girls, I had to outrun them and push myself through the matches. I couldn’t overpower them at all,” she said. She calls that creative mindset ‘counter-punching,’ and it became her default setting for every match. “I feel like I still have that in my game today.”

Support from the bleachers

Jodi Adkins has seen more high school tennis over the past 14 years than maybe any other parent in the state. As the mother of Zach, Charlie, and Zoe, Jodi has spent countless hours sitting on the bleachers in front of a tennis court, rooting on her three children. Don’t forget the countless team gatherings and ceremonies she’s attended, filled with what she calls terrible banquet chicken and questionable senior speeches.

But most importantly, she has been there for her kids. From her first varsity tennis match in seventh grade until now, expect Jodi to be sitting on the metal bleachers in front of Zoe’s unofficial home, the number one singles court, cheering her on. “Good ball, Zo,’” Jodi often says when her daughter hits a winner.

Even with the expectations of being the state’s number one ranked player, Jodi feels like thanks to Zoe’s ultra-competitive drive, which Jodi thinks is partly genetic since she calls herself frighteningly competitive, she embraces the pressure. “If she isn’t competing, she goes absolutely bonkers...it drives her crazy,” Jodi said. “She just wants to compete.” Maple Grove girls tennis head coach Dan Haertl coached Zach and Charlie when they played for the Crimson and wanted to stick around to coach their younger sister, who he had heard a lot about.

“I knew it would only be a matter of time before she started playing in the program,” Haertl said. “I said to Jodi, ‘I want to keep coaching here as long as Zoe is here.’”

As a tennis coach, one is always thinking about the best ways to gain advantages during a seven-match meet. For the past six years, Haertl has had the luxury of knowing his number one singles match could be penciled in as a win. For the last two seasons, Zoe hasn’t lost a single match. “When your best player is as good as Zoe is, you know you’re going to start every meet 1-0,” he said.

After playing five and six years on the varsity team, respectively, Zach and Charlie, who won state doubles as a sophomore, played their college tennis at Augustana University in Sioux Falls, South Dakota. Then, once their playing careers were over, they decided to return to their high school program and become coaches. Currently, Zach coaches junior varsity and Charlie coaches the C team, and in the summer, they frequently hit balls and train with Zoe, something she credits as a huge boost to her play.

“That helped me improve my game and keep me in a positive mindset,” Zoe said. “They are a major asset to my game. I’m grateful to have such supportive siblings. They’ve been my best friends. I don’t take our relationship for granted.” When the pandemic first hit in March 2020, Jodi said Zoe missed at most three days before being back practicing on the tennis court. Since interactions were limited to strictly family members, Zoe would spend hours on the court with her brothers, not missing a beat in her training regiment.

Normally, Zach and Charlie don’t travel with Jodi and Zoe, whether it be college visits or other tournaments out of state. But in early August, they all went to San Diego to see Zoe compete in the USTA Billie Jean King Girls’ 16 & 18 National Championships. Every match that went to a decisive third set, Zach and Charlie, as coaches, were allowed to come on the court and give Zoe advice before the winner-take-all frame.

Each time, she won the match. “It was invaluable having them there,” Jodi said. After the match ended, Jodi would look over and see her three kids standing on the court laughing together and probably roasting the opponent a little bit, she thought. “They all understand each other,” Jodi said. “If Zoe is struggling or plays a couple of bad points, she can hear Zach’s voice in the crowd saying, “C’mon!’”

Currently, Adkins is the top-ranked girls player in the state and has goals to end her high school career on a high note at the state tournament. “Doing well in state would be amazing,” she said. The one thing that has eluded Zoe during her successful varsity career is a state title. During her seventh and eighth grade year, she was too small and inexperienced to make strides at the state tournament, but as a freshman, she took third place and fourth as a sophomore, while dealing with a bout of bronchitis.

But Jodi doesn’t think winning the state championship is a bucket list item that Zoe needs to cross off. “She just wants to play well. She actually doesn’t care about the results,” Jodi said. “As long as she feels she played well, if somebody beats her, she’s fine.”

Next step in the journey

Along with a successful conclusion to her high school career, Zoe’s mind is also focused on her next tennis journey: college. Zoe said she is still not committed to a school, nor does she have a favorite, and probably won’t until November or December, as she intends to visit more colleges in October. But she did say proximity to her family could play a factor in where she decides to go.

“My main focus is to stay close to home so [my family] can watch matches, but I’m giving them all fair judgment,” she said. “I’m really excited to hopefully play on a high-level college team.” Adkins hopes she can be a vessel for growing the sport she grew up adoring and now playing at a high level. “It is pretty interesting because many people don’t watch tennis at all and make the natural assumption that tennis isn’t interesting,” she said. “It is understandable if you haven’t watched it, but the sport is growing. Women’s tennis is getting big.”

The sport hit a pinnacle a few weeks ago with the U.S. Open final of 18-year old Emma Raducanu and 19-year-old Leylah Fernandez. Two young tennis phenoms who have the potential to be faces of the sport for the next decade-plus are dominating now. As teenagers. “It is pretty motivational to watch an 18 and 19-year-old in a Grand Slam final,” Adkins said.

For someone as naturally talented as Adkins, an internal motivation to be successful is just as important as raw skills. And there is no lack of confidence and drive in her body. “Zoe is the most motivated person you will ever meet,” Haertl said. “I really like competition, having that fight and determination, and the feeling of expressing yourself,” Zoe said. “When you are on the court, it is a whole different world, whole different energy you don’t get to experience at any other time. That aspect is what keeps me playing.”

With the competitive drive of Adkins comes frustration and pain when losing a match. But that is all a part of the sport and why she continues to play. “If you use the loss positively, you learn things and can get better,” she said. “It’s all about getting better, learning from the setbacks, and preparing for the next match.”