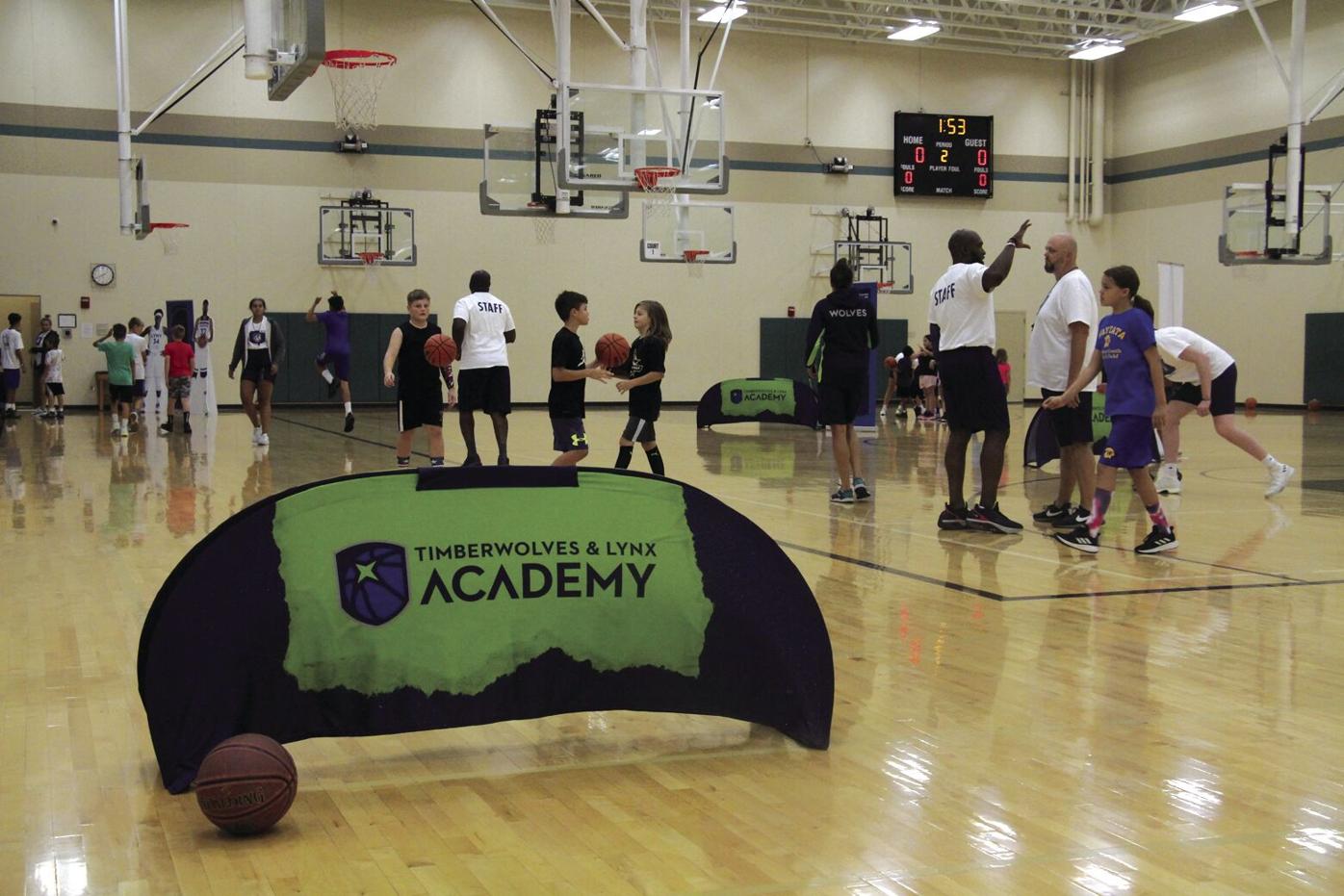 All week long, Maple Grove Middle School served as host for the Timberwolves Basketball Academy’s first summer camp of 2021. This is the first camp they have put on since 2019. (Photo by Sam Johnson) 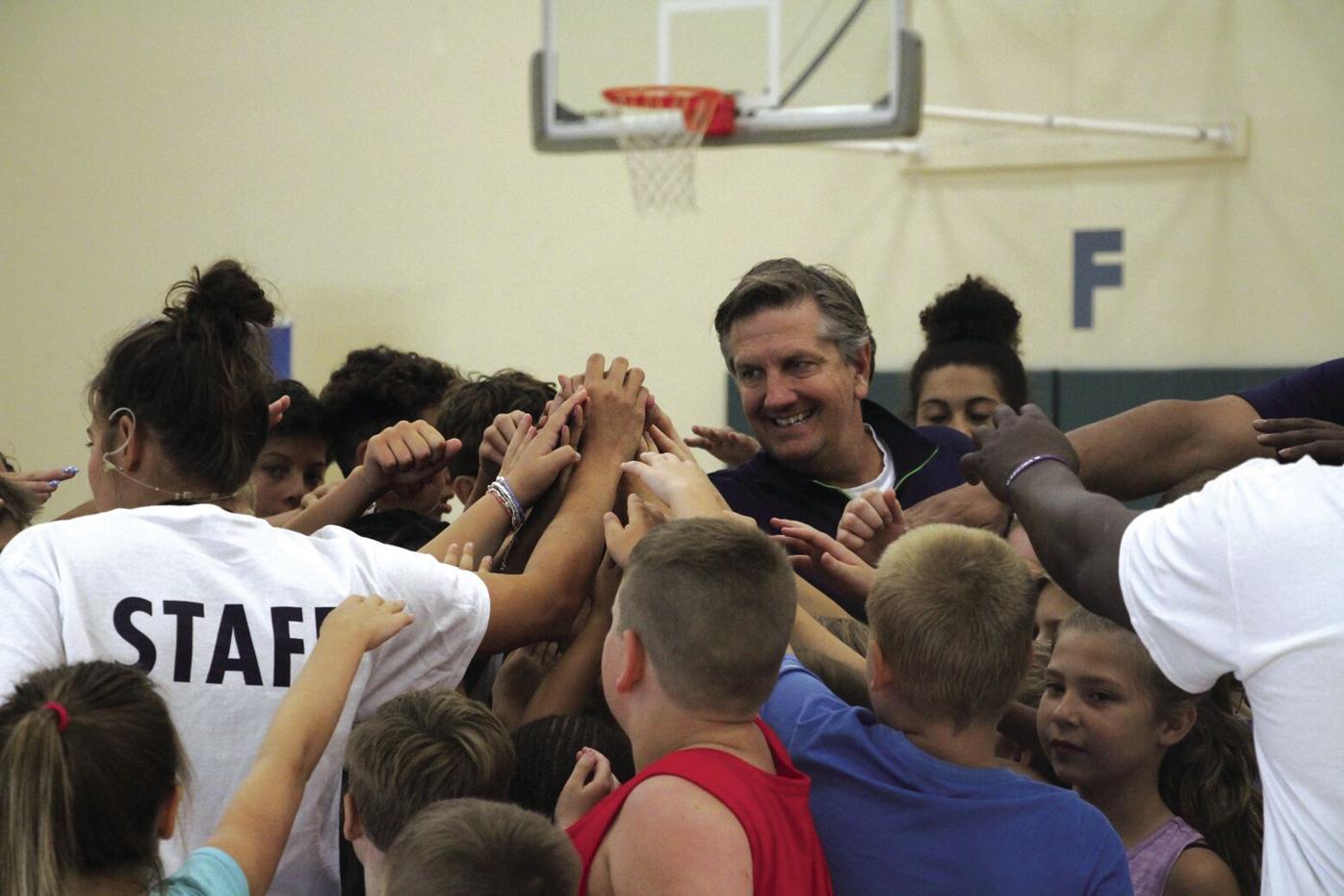 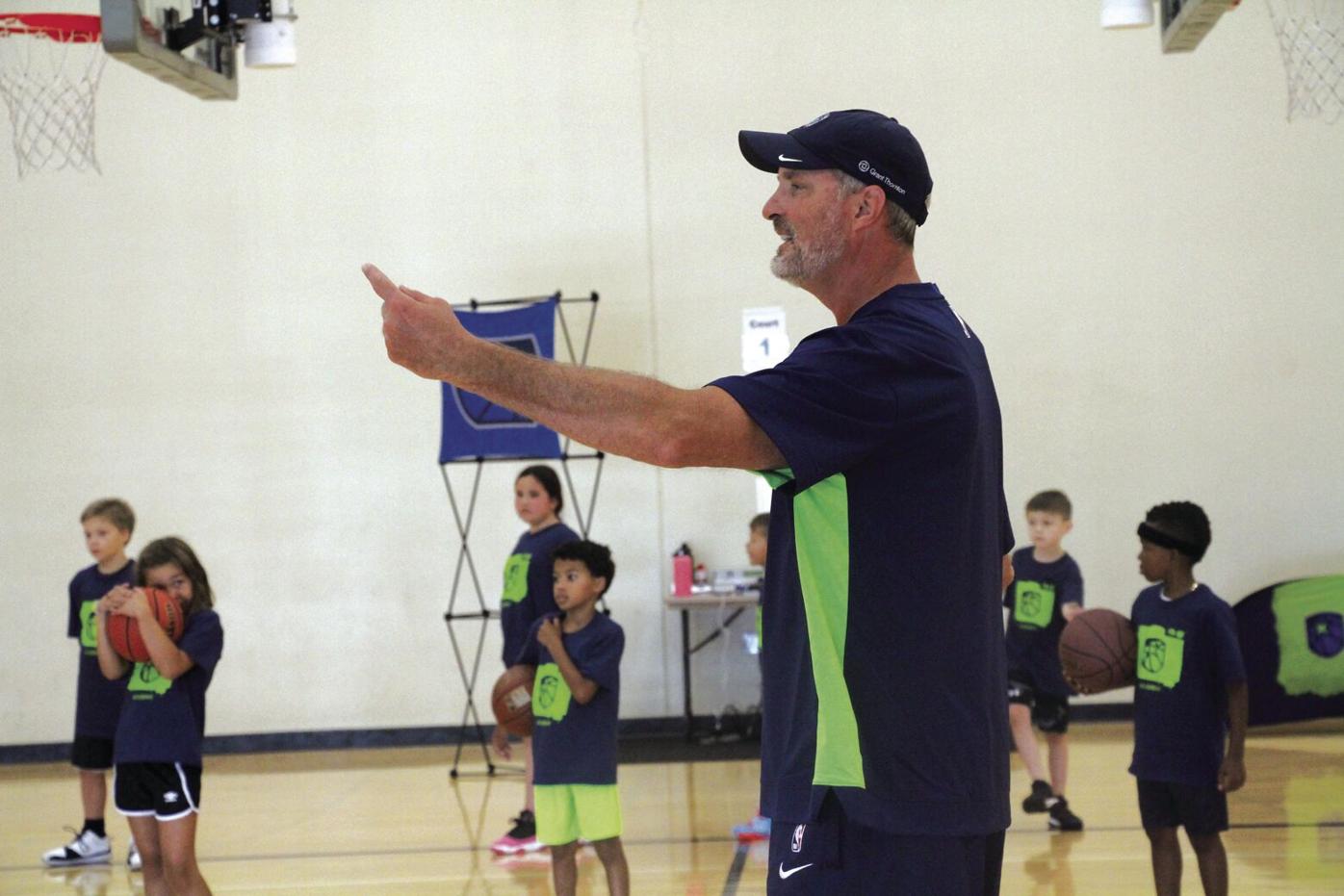 Former Timberwolves player and Basketball Hall of Famer Christian Laettner leads the campers in a speed dribble drill on July 13. “I love being on the basketball court and I love the game of basketball. I can’t do it any other way,” Laettner said. (Photo by Sam Johnson) 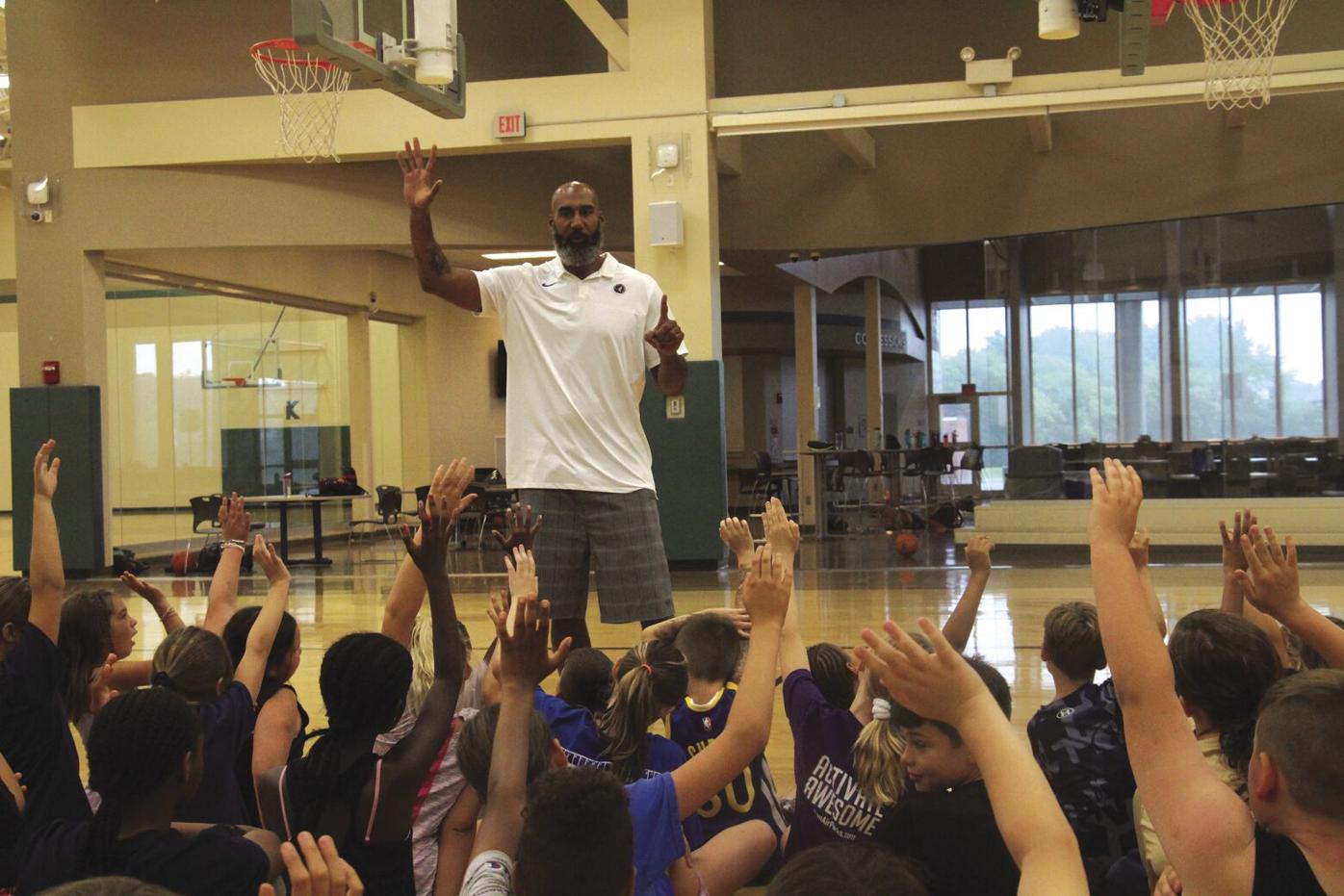 All week long, Maple Grove Middle School served as host for the Timberwolves Basketball Academy’s first summer camp of 2021. This is the first camp they have put on since 2019. (Photo by Sam Johnson)

Former Timberwolves player and Basketball Hall of Famer Christian Laettner leads the campers in a speed dribble drill on July 13. “I love being on the basketball court and I love the game of basketball. I can’t do it any other way,” Laettner said. (Photo by Sam Johnson)

For kids ages 7 to 14, they got the opportunity to practice drills, develop teamwork and leadership skills, and listen to current and former Timberwolves personalities talk about the sport.

This is not the first year Maple Grove has hosted a Timberwolves camp, but John Thomas, Vice President of basketball development for the Timberwolves and Lynx, said this summer has maybe more excitement than previous ones, due to camps and clinics being canceled last year due to COVID-19.

With all that has transpired the past year, from the pandemic to a push for racial and social justice, Thomas feels that basketball can be a way for the Timberwolves to give back to the area.

“There is a relationship with the community for them to feel like they are a part of the journey,” Thomas said. “Basketball is a conduit for us to give back. We appreciate the opportunity to be in the Maple Grove community.”

On the first day of the camp, the kids were greeted by Timberwolves head coach Chris Finch, who led the kids in a shooting drill. But before that, Finch did a question and answer session with the kids, responding to questions ranging from how he stays in the game mentally as a coach, to what he thinks about the rivalry between Timberwolves star Karl-Anthony Towns and Philadelphia 76ers star Joel Embiid.

“The question and answer sessions are priceless,” Finch said. “They ask what is in their heart.”

During the practice session, Finch went to the different stations, helping kids with proper shooting and footwork technique. “I’m always amazed watching how well the kids shoot the ball and how they compete,” Finch said.

Throughout the past year, basketball camps like this one have been dormant. COVID-19 has made in-person gatherings with close contact sports like basketball nearly impossible, but this summer provides the turning of a page. Maple Grove’s camp is the first one the Timberwolves have run since 2019 and excitement felt tangible from all involved.

“I’m excited to get to this point in the summer where we can get out in the community,” Finch said. “Everybody is always looking for great things to do in the summer and there is no better way than going to sports camps. If we can encourage these kids to pick up the game of basketball and be lifelong Wolves fans, that’s a double bonus.”

Day two saw the kids bump shoulders with another well-known Timberwolves personality, although he might be best known for The Shot during his time at Duke University. Christian Laettner, now 52-years-old, wore a dark blue Timberwolves hat, Wolves script T-shirt, and team shorts, and acted every bit as a coach during his hour at the camp.

Laettner ran a drill that emphasized the speed dribble, which involves dribbling nearly the length of the court alternating bounces with the left and right hand. Two kids participated at a time: one kid was on offense, dribbling the ball down the court, the other was chasing on defense. When the dribbler reached the top of the key, they were supposed to look over their inside shoulder to spot the defender and then make a decision- either slow down, jump off one foot and make a layup, or go off two feet and either shot fake or draw a foul.

Throughout the drill, Laettner would demand certain things from the campers. Whenever there was a transition into a different activity, running was mandatory. If it wasn’t your turn with the basketball, don’t play around with it. Growing up, when Laettner practiced basketball with his father, who doubled as his coach, if Laettner didn’t follow instructions, his father would raise his voice. However, during his time at Duke University, Laettner’s coach, Mike Krzyzewski, wouldn’t necessarily yell at his players, but he got the point across in a different way: they had to pay attention, or they wouldn’t play. Even at a young age, Laettner sought to teach kids about accountability.

“Sometimes you need a little raising of the voice and maybe a slap on the back of the head just to pay attention,” Laettner said. “A coach holds you accountable, a coach gives you simple instructions he expects you to follow and to push you to make you realize you can do more.”

Now living in Jacksonville, Florida, Laettner has been coaching youth basketball for a couple of years, including his 15-year-old son. But part of his loyalty still resides in the Land of 10,000 Lakes. During his most recent return to Minnesota, Laettner played a round at Indian Hills Golf Club in Stillwater, where he used to live on the 15th hole. What did he shoot on his familiar hole this time? A bogey, he said. Over a decade ago, Laettner informed the Timberwolves that if they ever needed a coach to work at camps, he was available.

“I love when I am lucky enough that they invite me,” Laettner said. “They know I love the organization and being in Minnesota.”

Then on the third day of camp, the theme of the session was service. Not just service on the basketball court but off it as well.

Timberwolves assistant coach Joseph Blair made a guest appearance, leading the kids in a triple threat drill that emphasized the jab step. But aside from the basketball lessons, Blair talked to the kids about the importance of serving others off the hardwood. After Blair’s 13-year professional basketball career, primarily overseas, he did seven years of community service work with different non-profit organizations and knows the power of investing back into communities.

“It is very important you serve in your community,” Blair told the kids. “Sometimes it’s just saying hello to a stranger.”

This past year was Blair’s first as an assistant coach with the Timberwolves, making previous stops with the Philadelphia 76ers and Houston Rockets. But in his short time in Minnesota, Blair sees the impact that Timberwolves camps, such as this one, have on kids in the metro area. “I remember the first basketball camp I went to. It is a life-changing experience” Blair said. “If I can make one person smile, then they might be able to go make another person smile, then there is a ripple effect of being positive and impactful in someone’s life. To be able to do that in an atmosphere like this, I consider it a blessing.”

Beyond the shooting drills, dribbling lessons, and passing exercises, this Timberwolves basketball camp strives to build kids not only into better athletes but more importantly better people. Before Blair finished his session with the kids, he gave them a word of advice: “I want to make sure you leave this camp thinking how you can be a better basketball player but how to be a better person as well.”