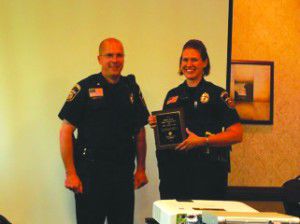 Maple Grove Police Chief Eric Werner and officer Angela Tschida were recognized by Partnership for Change for their work on Source Investigations. Not pictured and also recognized was Adam Rolshouse from Brooklyn Park Police Department. 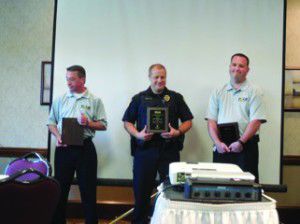 Maple Grove Police Chief Eric Werner and officer Angela Tschida were recognized by Partnership for Change for their work on Source Investigations. Not pictured and also recognized was Adam Rolshouse from Brooklyn Park Police Department.

Partnership for Change has recently worked with police departments to implement new strategies. “We support community solutions, and law enforcement is a key partner in preventing alcohol abuse,” said Sheila Nesbitt, Partnership for Change coalition coordinator. “Our departments have shown their dedication to keeping youth and communities safe from underage and irresponsible alcohol use.”

This summer Brooklyn Park and Maple Grove police departments launched Source Investigations. When an officer is called to an incident where underage drinking is involved, they investigate where the youth got their alcohol. When they find who provided the alcohol, the provider is charged. Together with Partnership for Change, the departments created a protocol for source investigations, including co-producing a training video for all officers and investigators within the two departments.

The video was shown at the June 17 meeting as an example of the work Partnership for Change is doing and as a potential tool for other police departments to consider adopting.

Another tool being used by Brooklyn Center, Osseo and Plymouth Police Departments is Place of Last Drink (POLD). Officers from the three departments have worked on a task force for the last year to track patterns for alcohol-involved incidents.

For calls where alcohol played a role, whether domestic violence, physical assault, or other offenses, officers ask those involved where they had their last drink. The information is entered into a shared database. If they see a pattern involving the same retailer, they visit the retailer, inform them of the pattern and offer suggestions for reducing over-service.

“POLD identifies retailers that will benefit from education, ultimately saving them from potential liability issues and protecting the community from the consequences of intoxicated individuals,” Nesbitt said.

One form of training offered to local alcohol retailers by area police departments and agencies is Responsible Beverage Service Training (RBST). Brooklyn Center, Brooklyn Park, Golden Valley, Maple Grove and Osseo either offer or require RBST of all alcohol retailers within their cities.

Representatives at the Partnership for Change meeting also discussed alcohol compliance checks, social host ordinances, and other strategies to prevent underage and irresponsible alcohol use.