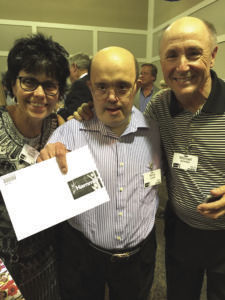 Maple Grove resident Cindy Scheller, left, as been a direct service volunteer with Kelly, center, for the past 42 years. Kelly has joined Cindy and her husband Michael and their kids and grandkids for holiday celebrations and when ever possible. The Scheller’s will be honored Saturday, April 29, at Hammer’s Annual Spring Breakfast with the 2017 Community Partner Award. 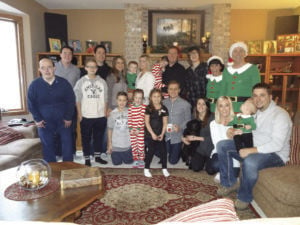 Cindy and Michael Scheller and family celebrate Christmas with Kelly. Kelly has become part of the family.

Maple Grove resident Cindy Scheller, left, as been a direct service volunteer with Kelly, center, for the past 42 years. Kelly has joined Cindy and her husband Michael and their kids and grandkids for holiday celebrations and when ever possible. The Scheller’s will be honored Saturday, April 29, at Hammer’s Annual Spring Breakfast with the 2017 Community Partner Award.

Cindy and Michael Scheller and family celebrate Christmas with Kelly. Kelly has become part of the family.

April 23 to 29 is Volunteer Appreciation Week. One Maple Grove resident has found the joy in volunteering for more than 40 years. Because of this devotion, Cindy Scheller and her family will be recognized this weekend.

Scheller is a member of Hammer’s Volunteer Hall of Fame. She has dedicated 1,965 hours of her time at Hammer. Most of that time has been spent with Kelly, who has become a member of the Scheller family.

She is a Direct Service Volunteer, where she spends individual time with Kelly and then takes him out to socialize or spend time with her family.

Kelly moved to Hammer from a state institution when he was 13 years old.

"When I went to college, I changed my career ideas," Scheller said. "I decided I wanted to help kids. So I went to school to just be a paraprofessional. The gal I worked with at the time said she thought I really should go to school to be a teacher."

Scheller transferred to St. Cloud State University and got her degree to become a special education teacher.

To get experience, Scheller first became a volunteer and worked on the boys floor at Hammer Residences. She met and became Kelly’s direct service volunteer in 1975.

"I just had a connection with him," she said. "He’s just such a sweetie. We just bonded."

Scheller began bringing Kelly back home to her parent’s house. "I knew he didn’t have anywhere to go for the holidays," she said. "So he started coming to my parent’s house and then to my house."

During the 42 years Scheller has known Kelly, she said there was only one Christmas Kelly has not been with her and her family. "I lived out in California for a year, but my parents still picked him up and brought them to their house," she said.

Scheller said Kelly knows where to sit, in his special spot on the couch, during her family’s Christmas celebrations. "It’s just like clockwork," she added. "He also likes to sit a certain spot at the kitchen table where he likes to do his puzzles."

Every Christmas Eve the Schellers and Kelly go bowling, since Kelly loves to bowl.

Scheller’s husband, Michael, and their children and grandchildren also like that Kelly is part of their family. Her grandkids color and do puzzles with Kelly.

Besides holidays, Scheller tries to take Kelly as often as she can. "Mike and I try to make a point for Kelly to come over whenever possible," she said.

Scheller recalled the first birthday she and her husband celebrated for Kelly. "Kelly loves hamburgers," she said. "We bought him this cool hamburger birthday cake. He absolutely loved it. So, two Christmases ago I saw a hamburger bank. I bought him that."

Kelly has also attended Scheller’s wedding to Michael and their kid’s weddings as well. Scheller added Kelly likes to pray at family gatherings and prayed at one of Scheller’s kids’ weddings to abut 300 guests.

Scheller said that when her father died, Kelly was not going to be able to make it. The former CEO of Hammer, Tim Nelson, picked up Kelly and brought him to the funeral after Scheller made a phone call.

Scheller said she hopes to bring Kelly along with her family when they go camping this summer.

"I don’t really think of myself as a volunteer," Scheller said. "I think of Kelly being a part of my family and my life. I care about him as a caretaker would care about someone."

Barbara Brandt, Director of Communication at Hammer, said about the volunteers, "It’s more of a relationship."

Scheller said receiving the award is very humbling. "Kelly is a part of my life," she said. "I wouldn’t change any of it."

She added she hopes that other families consider becoming a volunteer to include someone else in their family.

"Our family finds joy in being advocates for people with disabilities," Cindy Scheller said. "Kelly has taught us about this and we our so thankful for the his big heart and love. Kelly is a blessing that goes beyond words!"

The Scheller Family of Maple Grove, including Cindy, Michael and kids, will be honored at Hammer’s Annual Spring Breakfast Saturday, April 29, in Minnetonka.

Hammer Residences as many different types of volunteer opportunities. Brandt said people can volunteer as a family or individual, even a corporation could volunteer. Volunteers can make a meal once a month, bring their pets to homes or even make arts and crafts. Visit www.hammer.org for more details.