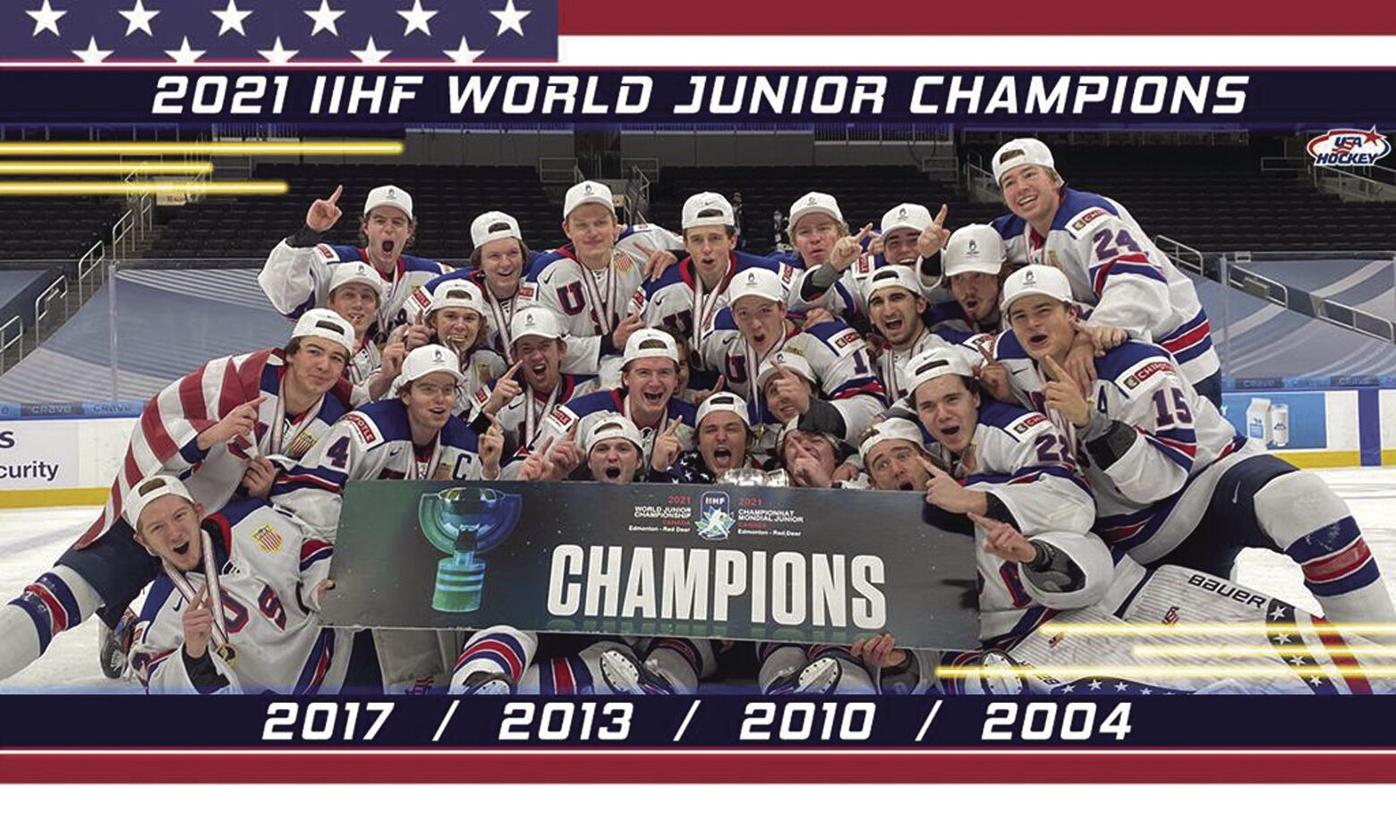 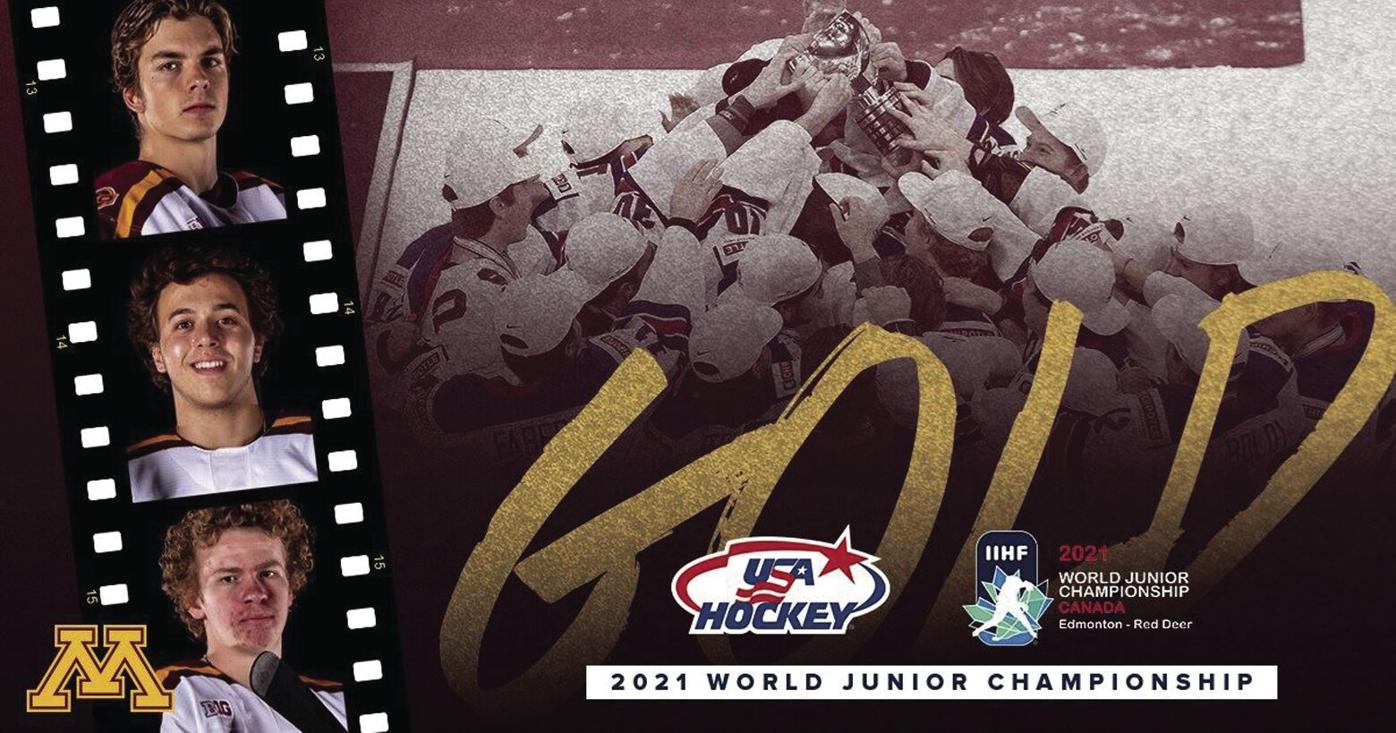 Brock Faber of Maple Grove (second from top) was one of three University of Minnesota players to play for Team USA in the recently completed World Junior Championships.

Brock Faber of Maple Grove (second from top) was one of three University of Minnesota players to play for Team USA in the recently completed World Junior Championships.

Brock Faber may very well win a national championship with the University of Minnesota hockey team this season. There’s also a chance he could someday win a Stanley Cup in the National Hockey League.

That said, it will be hard to match the experience of winning a gold medal wearing a “Team USA” jersey.

The Maple Grove product and University of Minnesota freshman played a huge role in helping the United States win the gold medal at the World Junior Hockey Championships. The Americans scored a huge upset to claim the title with a 2-0 victory over heavily favored Canada on Jan. 5, in Edmonton, Alberta.

“I still really can’t put it into words what it felt like to win gold,” Faber said Friday night during a conference call from Madison, Wisconsin, where the Gophers were preparing to take on the Badgers in a weekend Big Ten series. “It’s something you dream of as a kid and I still get chills thinking about it. I can’t talk about it without smiling.”

Faber was one of three Golden Gophers’ defensemen on Team USA, which won gold for the first time since 2017. At 6 feet, 190 pounds, Faber has the size, speed and agility that teams at every level crave. He was a second-round pick in the NHL draft by the Los Angeles Kings in October.

The Canadian team breezed through pool play and the medal round, outscoring their opponents 41-4 to reach to the gold-medal game. On home ice – though without fans – Canada was expected to skate away with the championship.

Team USA, however, had other plans. The Americans needed a stellar performance from their goaltender to beat Team Canada and they got exactly that from Spencer Knight, who plays for Boston College. Knight stopped all 34 shots he faced, and Team USA got a first-period goal from Alex Turcotte of the University of Wisconsin that turned out to be the game-winner.

“We were very confident going into the Canada game,” Faber said. “We knew what we had in our locker room and we knew the skill that we had. We were ready to go and were excited to play them. They’re a great team and we were excited we came out on top.”

Team USA lost its opening game to Russia, 5-3, before winning its next six games while only allowing five goals. The Americans have beaten their rivals and neighbors to the north in four of their five meetings in a gold-medal game.

“Playing Russia on Christmas night, it was a pretty big stage,” Faber said. “There were a lot of nerves going into that one. It wasn’t our best game, but we definitely learned what our identity was as a team. From then on, we focused on playing behind teams’ defense and battling down low. That Russia game was a huge learning experience for us.”

FINISHING STRONG WITH GOPHERS A PRIORITY

Faber’s focus now shifts back to helping the Golden Gophers, who entered last weekend’s Big Ten Conference series at Wisconsin ranked No. 1 in the nation. Minnesota has a storied history but is looking for its first national title since winning back-to-back titles in 2002-03.

The program has recently endured a few sub-standard years, but coach Bob Motzko – who is in his third year at the helm after a successful run at St. Cloud State – appears to have Minnesota on its way back to national prominence.

“Confidence is huge,” Faber said. “Coming in as a freshman, I think any of us in the country would say it’s a pretty crazy year. College (hockey) is a big step for me and other players. Now that I’ve been here for a while and with this under my belt, hopefully that will help me help the team in any way I can.

“I think (the World Juniors) helped me become a well-rounded person as far as getting to know new people and trying to become a better teammate.”