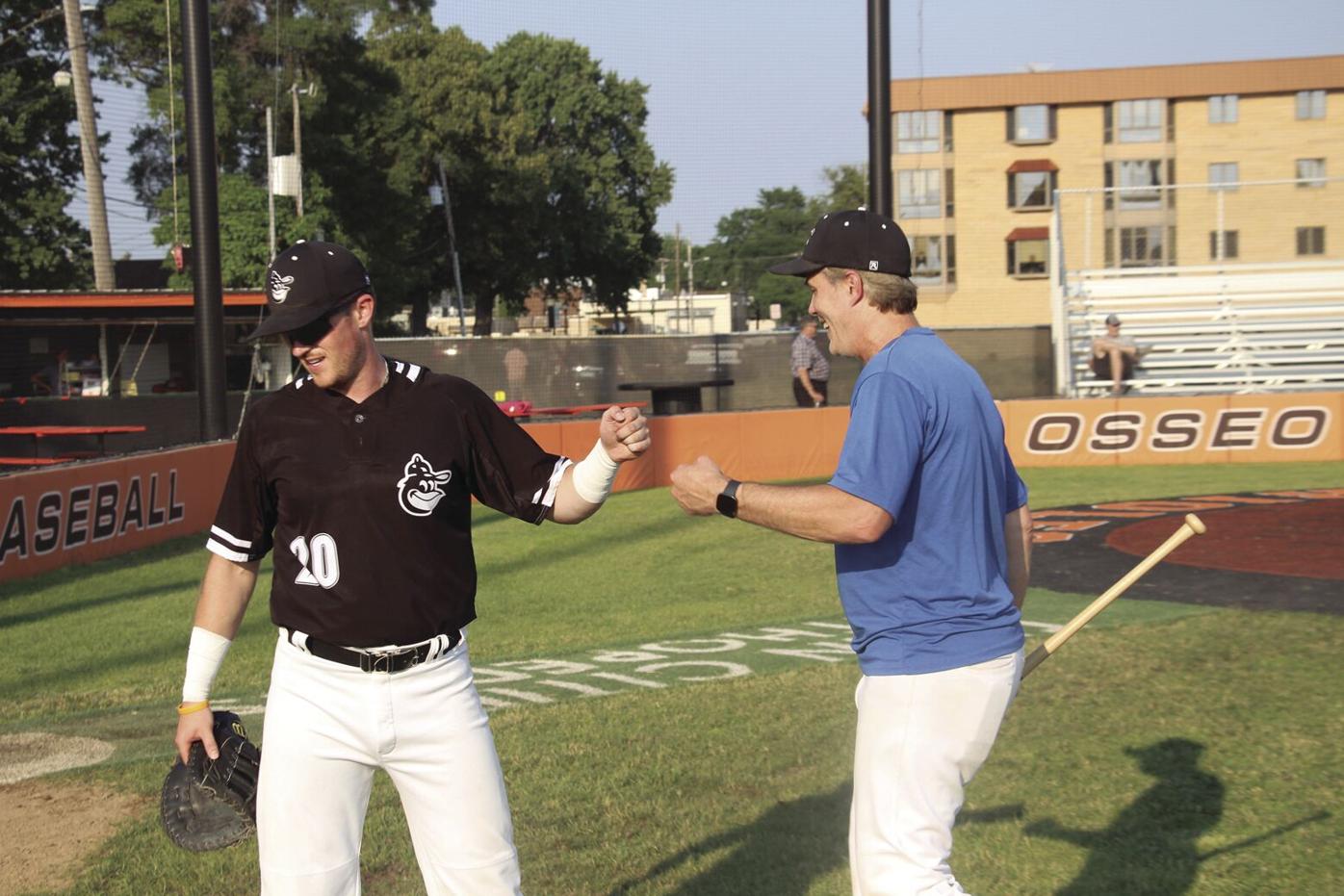 Nat Croaker and Vince Palyan bump fists before the game between the Orioles and Plymouth Hitdawg on July 1 at Osseo Memorial Field. Croaker and Palyan both became team co-managers three years ago. (Photo by Sam Johnson) 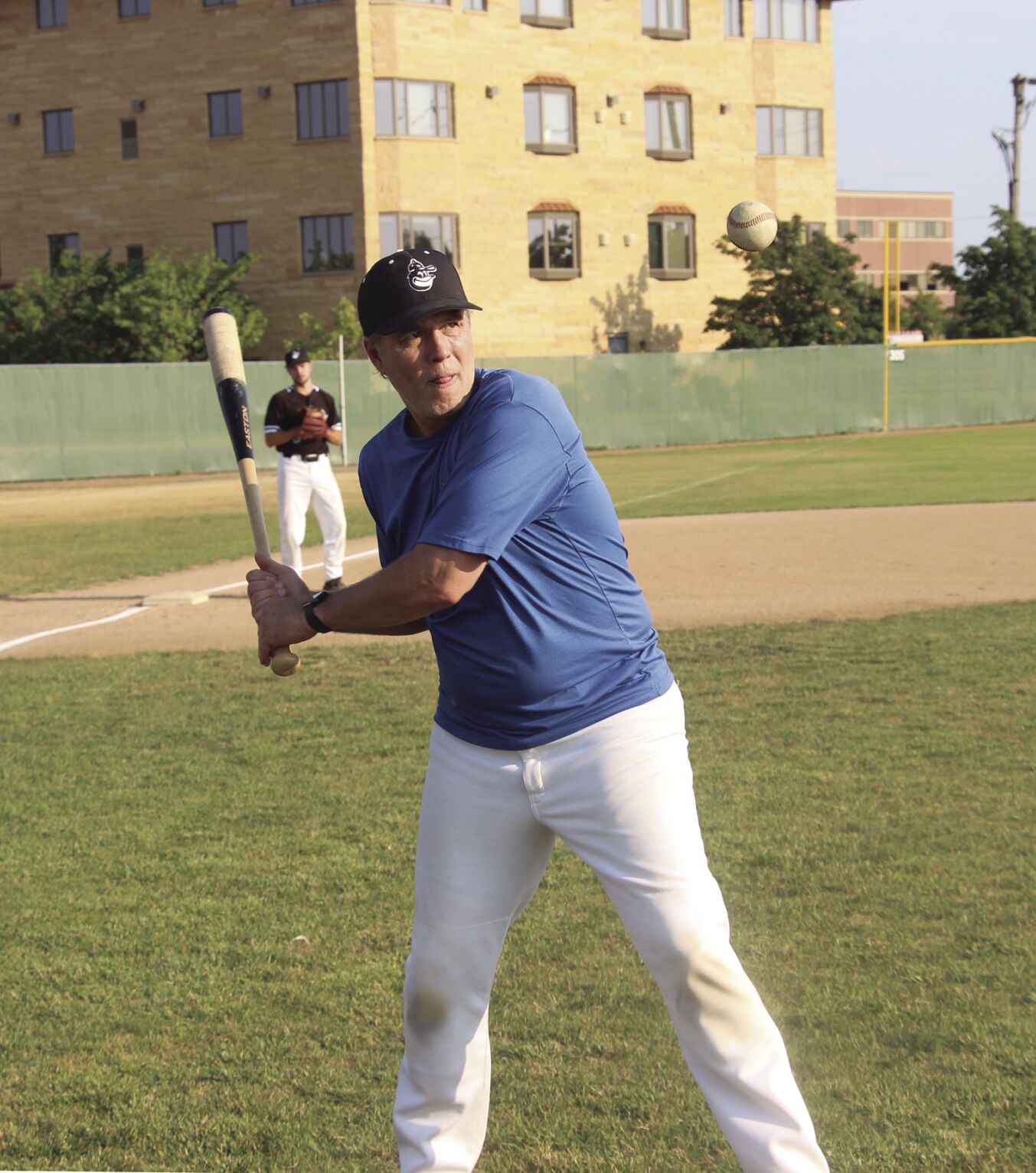 Osseo’s Vince Palyan hits ground balls to the infielders before the Northwest Orioles play Plymouth Hitdawg on July 1 at Osseo Memorial Field. Palyan played college baseball at the University of Minnesota before being drafted by the San Francisco Giants in the 1989 Draft. (Photo by Sam Johnson) 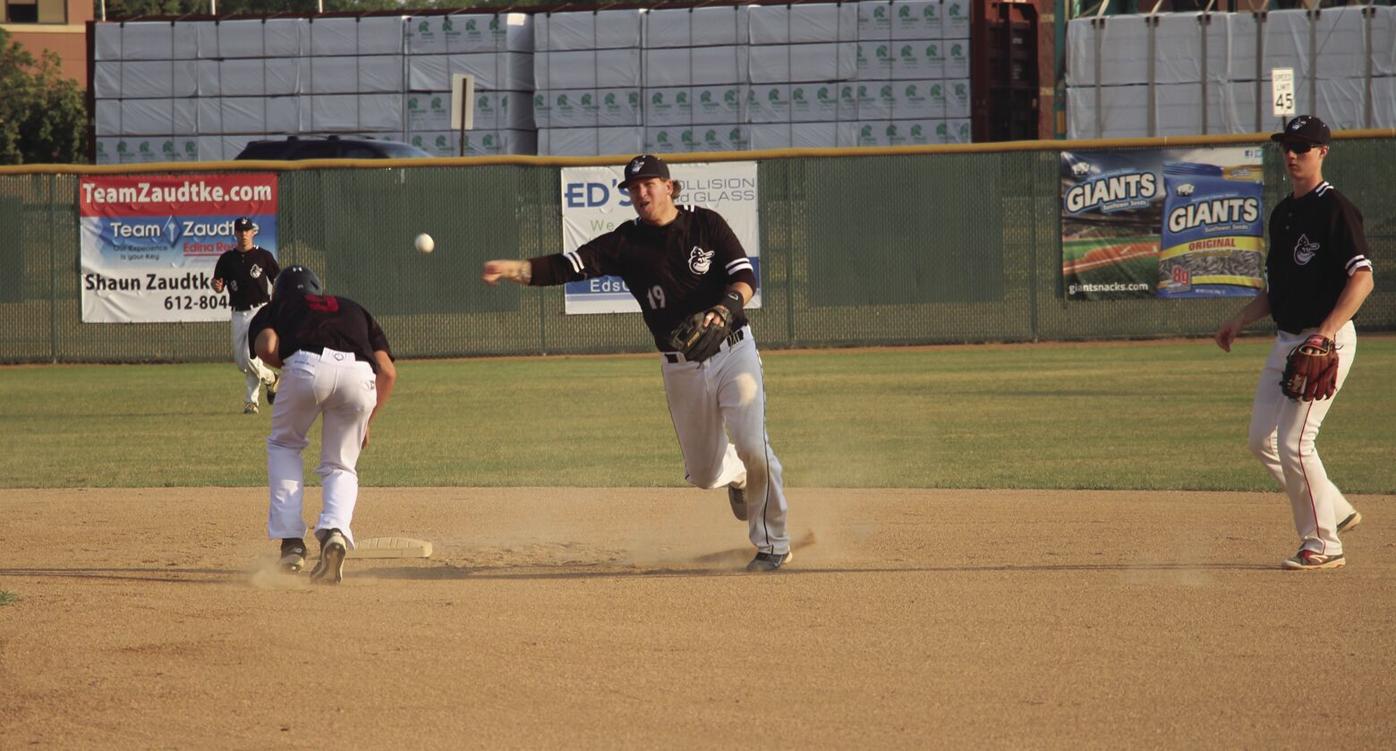 Osseo’s Jordan Stroh throws to first base against Plymouth Hitdawg on July 1 at Osseo Memorial Field. Stroh, 27, is one of the oldest players on the team and one of four members of the current team from the inaugural season in 2013. (Photo by Sam Johnson) 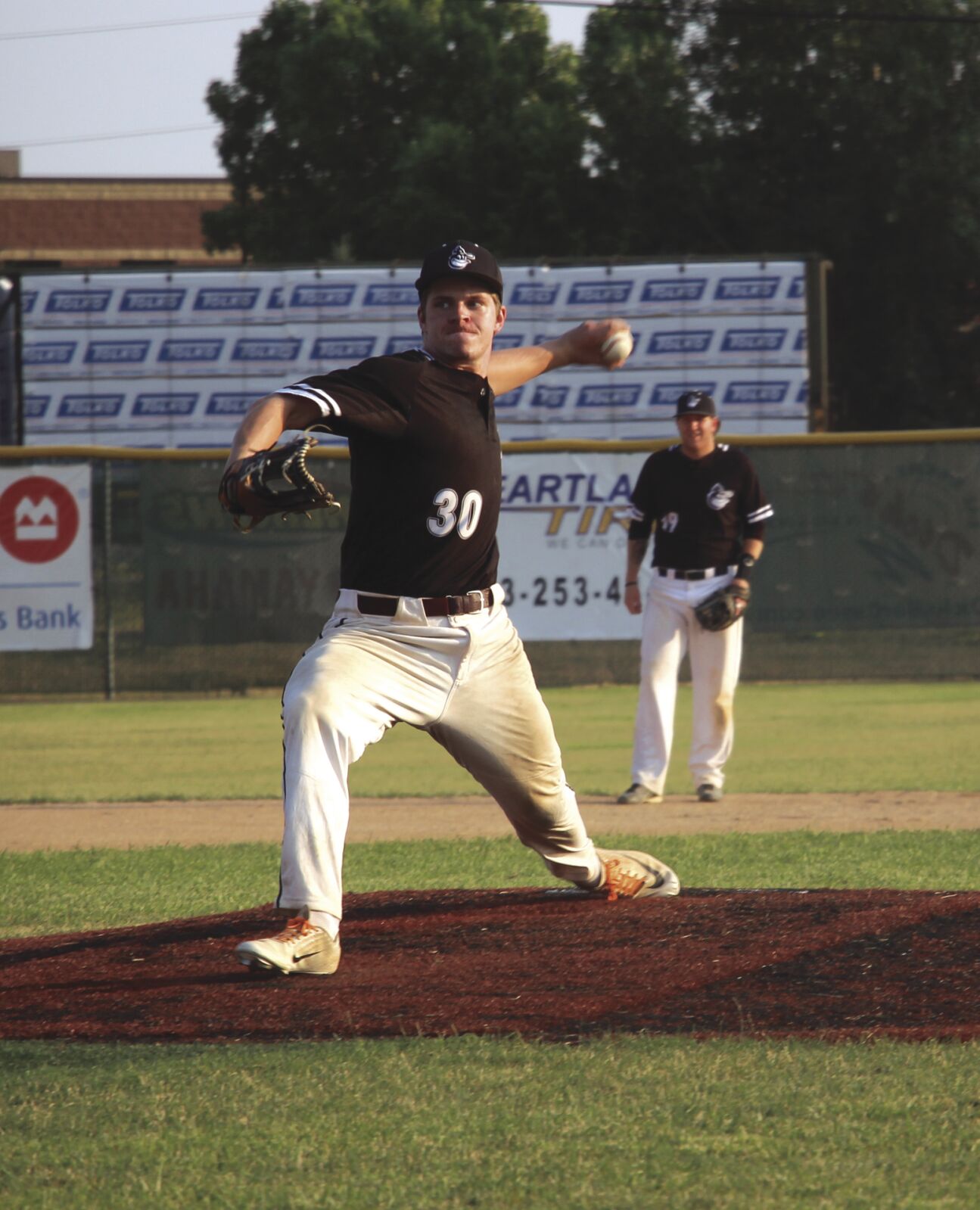 Nat Croaker and Vince Palyan bump fists before the game between the Orioles and Plymouth Hitdawg on July 1 at Osseo Memorial Field. Croaker and Palyan both became team co-managers three years ago. (Photo by Sam Johnson)

Osseo’s Vince Palyan hits ground balls to the infielders before the Northwest Orioles play Plymouth Hitdawg on July 1 at Osseo Memorial Field. Palyan played college baseball at the University of Minnesota before being drafted by the San Francisco Giants in the 1989 Draft. (Photo by Sam Johnson)

Osseo’s Jordan Stroh throws to first base against Plymouth Hitdawg on July 1 at Osseo Memorial Field. Stroh, 27, is one of the oldest players on the team and one of four members of the current team from the inaugural season in 2013. (Photo by Sam Johnson)

Go to any baseball game and all five senses will get a workout. That is the beauty of what makes the sport America’s national pastime. From 40,000 seat stadiums to baseball diamonds cut into cornfields in the middle of nowhere, some things never change.

The smokey smell of burgers and brats on the grill. The taste of buttery popcorn and fluffy cotton candy. The sight of kids and adults alike challenging their inner child with giddy smiles and laughter. The feel of fresh leather as a glove gets put on to catch a foul ball in the bleachers. The sound of a wood bat connecting with the ball and singing “Take Me Out To The Ball Game.”

All that makes baseball fun and enjoyable is just as evident in the amateur levels of the sport, otherwise known as town ball. And one local team is playing to keep the love of the game alive. Ever since 2013, the Northwest Orioles have represented Osseo in the Class A men’s amateur baseball league.

Currently, four players still on the roster have been with the team since its founding: Nat Croaker, Jordan Stroh, Corey Palyan, and Vince Palyan. Croaker and Vince Palyan, along with being rostered players, are also co-coaches for the Orioles.

Croaker, originally from Maple Grove, played one year for the Hamel Hawks in Class B before joining the Orioles after hearing about the new team from a buddy who went to Osseo. Growing up, Croaker got immersed in the love for baseball from his dad and now at 27 years old, the oldest player on the team, the passion hasn’t waned. “Baseball is in my blood,” Croaker said. “I can’t get enough.”

When he is not playing first base or around the diamond for the Northwest Orioles, Croaker coaches the junior varsity and VFW teams for Osseo and will soon be the physical education teacher at Osseo Middle School. Every Tuesday and Thursday morning from 9 to 11 a.m., he runs fundamental drills for all ages at the baseball field and gets to see the development of the kids who might one day be a part of his teams. “We have a lot of talent here,” he said.

Often some of the kids on Croaker’s team come out to Osseo Memorial Field to watch their coach play. It’s a way for them to relate with Croaker, seeing him play the same sport, just on a different level. “I’m trying to be the best example for them,” Croaker said.

BASEBALL IN THE PUREST FORM

When Croaker first made the jump to town ball, he didn’t anticipate the level of competition and talent from other teams. “At first, I didn’t know what to expect,” he said. “It was the best talent I had ever faced.”

The high-skill level seen in amateur baseball shouldn’t be a surprise, however. Most of these players have had success at previous levels of baseball, high school, college, minor leagues, and major leagues, and an undying love of the game, that when they are eligible to play town ball, where they have to pay to play, they join without skipping a beat.

“Town ball is the purest form of baseball,” Croaker said. “We’re here because we love the game. It gives us an identity to hold on to.”

As much as the players love the town ball atmosphere, the state and local communities arguably love it just as much. When Croaker played for the Fargo Mets, he and the team went down to a small Minnesota farm town to play an evening game. As soon as the game started, cars lined the fence by the first base side and whenever the home team would score, the drivers would honk the horns and flash the lights, something Croaker had never seen before. “I thought, ‘Wow, people just love baseball,’” he said. “It really is a community thing.”

Throughout his career, Vince Palyan, like many town ball athletes, has seen and played baseball at many different levels. He played collegiate baseball at the University of Minnesota from 1985 to 1989, headlined by winning the Big Ten in 1988.

After the conference championship, the entire Minnesota outfield, including Palyan, was drafted. Palyan got selected by the hometown Minnesota Twins in the 18th round but chose to return to college for his senior year. In 1989, he was drafted again, this time by the San Francisco Giants in the 42nd round.

He played at the Single-A level but that is as far as his minor league career went, but another avenue of baseball piqued his interest: coaching. Palyan credits John Anderson, his head coach at Minnesota and current Gopher skipper, as one of the influences for his coaching career.

Now, Palyan gets to share the dugout with guys from college-aged, to late 20s, which is something he relishes. “It gives me a reason to give back and reconnect with young kids and some older guys,” he said. “I just like being around the game.”

Three years ago, Palyan and Croaker took over the Northwest Orioles from Joe Lavin, who took the head coaching role for the varsity squad. Since the team’s founding, they have made two state tournament appearances, 2015 and 2020. Yes, team success like state tournaments is the ultimate goal of any baseball team, but these guys on the Northwest Orioles play for something else.

“We keep reminding ourselves at the end of the day, we’re all kids at heart,” Vince said. Kids at heart, playing the age-old game that never seems to die.