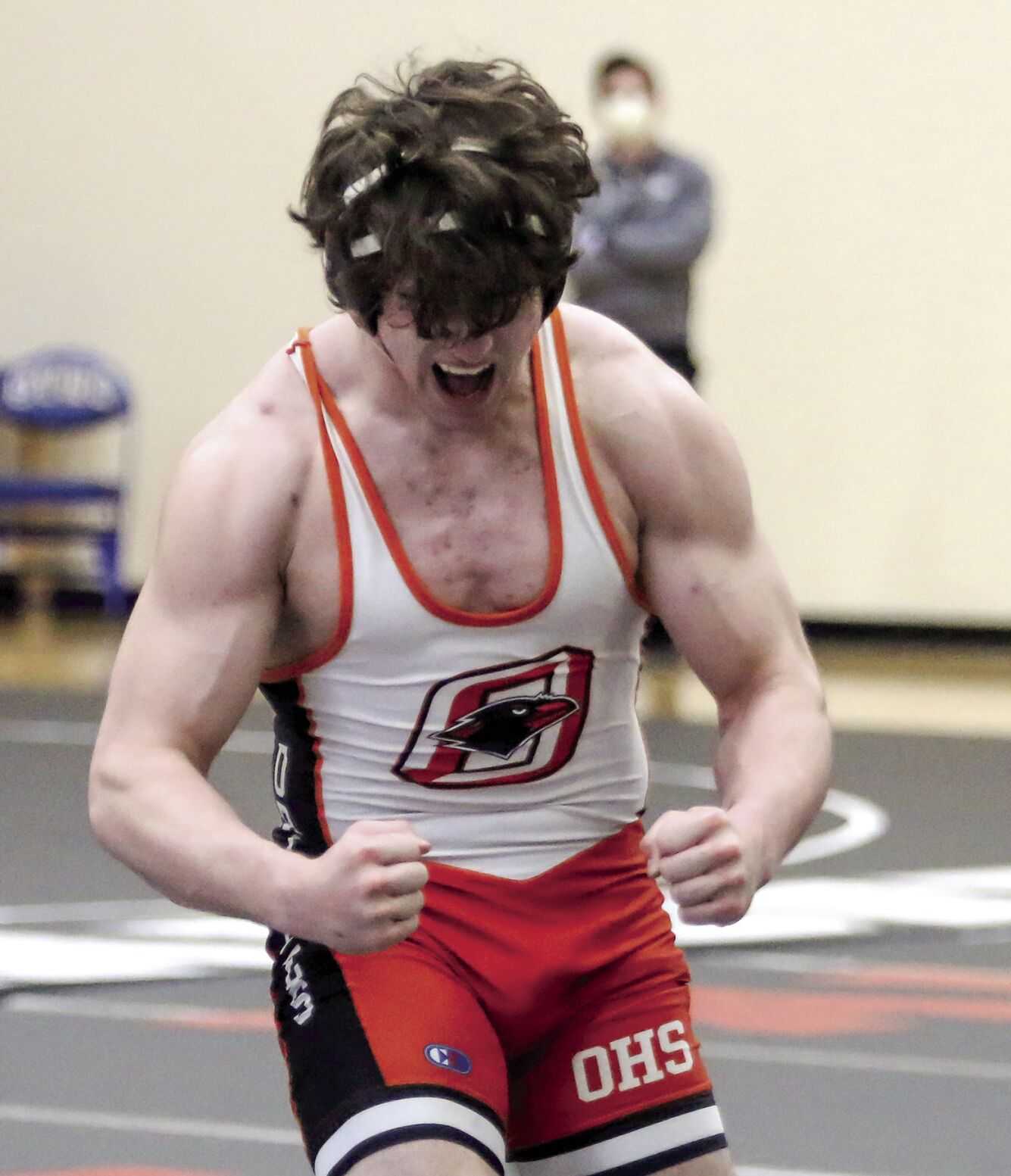 Osseo junior Jacob Meissner celebrates after a 5-3 decision over Shakopee’s Tommy Johnson in the 220-pound Class 3A state individual championship on March 25 at St. Michael-Albertville High School. Meissner made the final with a 5-3 win over New Prague’s Evan Anderson and a 3-2 ultimate tie-breaker win over 2020 champion Hopkins’ RJ Chakolis. (Photo by Pat Slack) 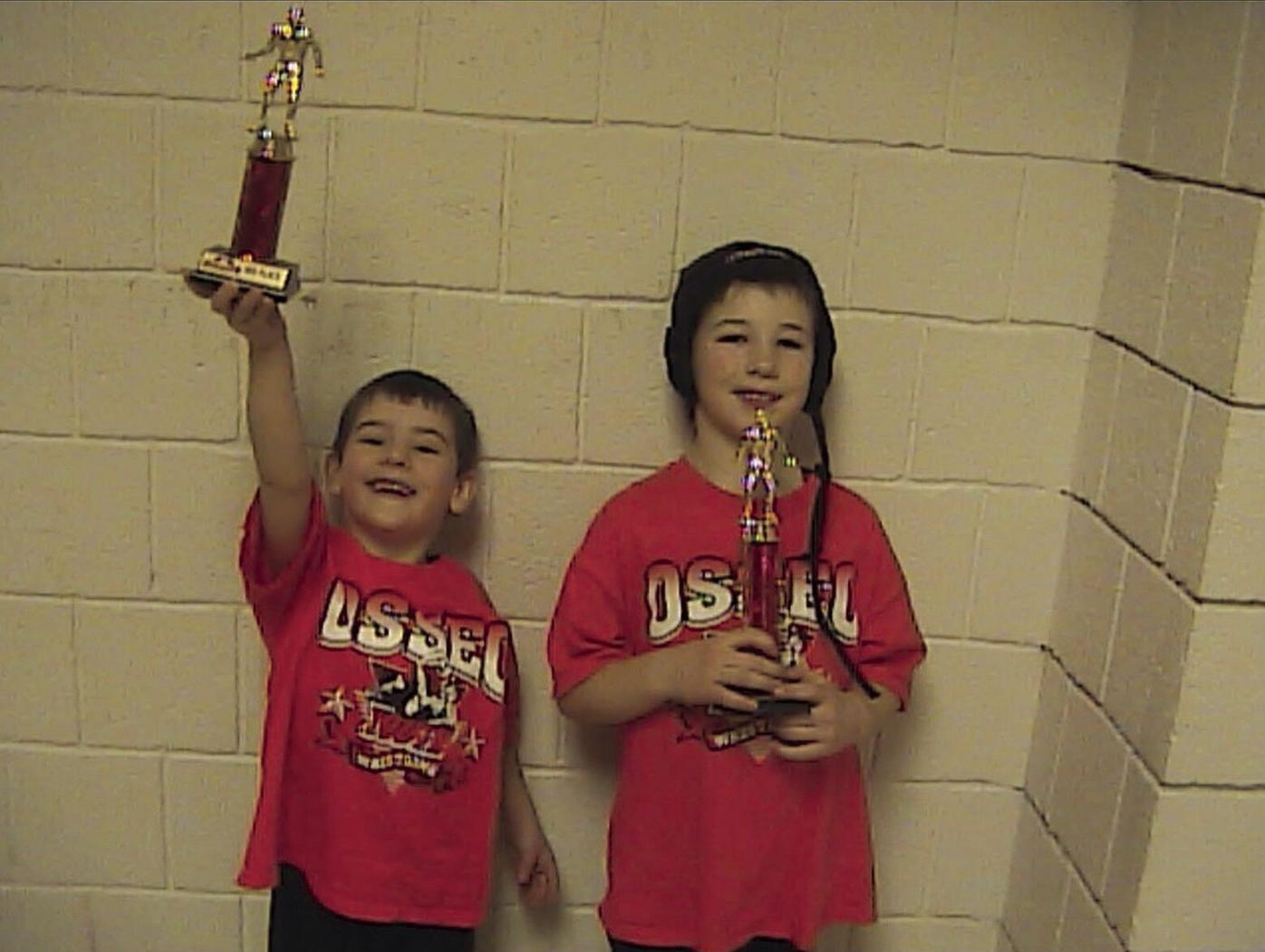 Osseo junior Jacob Meissner celebrates after a 5-3 decision over Shakopee’s Tommy Johnson in the 220-pound Class 3A state individual championship on March 25 at St. Michael-Albertville High School. Meissner made the final with a 5-3 win over New Prague’s Evan Anderson and a 3-2 ultimate tie-breaker win over 2020 champion Hopkins’ RJ Chakolis. (Photo by Pat Slack)

In the middle of his state championship wrestling match, all Jacob Meissner heard was his dad’s voice.

Normally, wrestlers don’t hear a lot from the crowd during a match, with all their focus on their opponent on the other side of the mat.

But during the final period of Meissner’s Class AAA 220-pound championship on March 25 against Shakopee senior Tommy Johnson, that was the voice he needed to hear. Meissner, a running back and linebacker for Providence Academy, suffered a high-ankle sprain in the fall and had just reaggravated the injury as he twisted with Johnson out of bounds. He is a junior at Maranatha Christian Academy, plays football at Providence Academy and wrestles with Osseo High School as a part of a team co-op.

Amid pain and the intensity of a state championship, he could pick out his father, Ryan’s, voice from the top of the bleachers.

“Stick in there, buddy!”

“I was yelling as loud as I could,” Ryan Meissner said. “He is a gamer.”

While Ryan Meissner had the lungs to give his son encouragement from the audience, Jacob Meissner’s mother, Rachael, was more subdued. “When he hurt his ankle, I didn’t know if he would be able to continue,” she said. “I was sick to my stomach.”

As a junior wrestler at Osseo High School, Meissner had already been battle-tested. Three weeks before the section tournament during his freshman season, Meissner was diagnosed with mono, which put him in the hospital for five days. Each time a doctor came into his room, Meissner would ask the same question: “could I wrestle?” He got the same answer: “no.”

But one doctor opened the door of possibility and said he could try but wouldn’t have anywhere near the same energy needed to compete. That season, Meissner not only competed in sections but made it to the state tournament. “I couldn’t believe he did that,” Rachael Meissner said.

Now, it was an ankle sprain that stood in his way, and his fighting spirit was put to the test again.

In preparation for this postseason, Jacob Meissner, the Osseo junior, wasn’t even sure he would be in a position to compete for a title in the 220-pound weight class. Most of the season he competed in the 195-pound division and had successful results, but in advance for the section and state tournament, he and his coaches brainstormed the idea of moving up a class.

As a football player, Jacob Meissner knew his quick feet and explosive tackling would give him an advantage going up against 220-pound wrestlers. He took the gridiron to the mat. “It is unbelievable how much wrestling helps football and vice versa,” Ryan Mesissner said.

“These guys are big and strong but I know I’m faster than them,” Jacob Meissner said. “I felt like I could hold up as long as I was using my speed.”

Jacob Meissner was determined to make sure he could last at most eight minutes on the mat with the bigger, stronger wrestlers. He trained by running three miles every other day, spending more time in the weight room, and an inordinate amount of food.

Even still, the wrestlers he would face at the 220-pound level are not easily pushed around. So, Jacob Meissner embraced an underdog mentality. “I knew I wasn’t slotted to win it, but I thought I am going to do my best and see where that gets me,” he said. “I wasn’t supposed to win state.”

For a wrestler, supportive mentors and coaches are needed in your corner to succeed. Carson Brolsma, a former wrestler at the University of Minnesota and Osseo High School, started working with Jacob Meissner two years ago.

Brolsma trained with Meissner one or two times a week and served a bigger role than just a coach. “I was there to be a big brother and mentor,” he said.

The more he worked with Meissner, the more Brolsma saw how he puts in the extra time and effort to hone his craft. “Jake is so easygoing,” he added. “There is a smile on his face and he is listening and asking questions.”

When it came time to decide whether to move up a weight division in the postseason, Brolsma liked Meissner’s chances of giving the bigger wrestlers fits. “A lot of 220-pound wrestlers hadn’t faced the speed of Jake,” he said. “The way he competes is a difficult match up. It will give him a lot of confidence going into next season.”

While Brolsma started working with Meissner just two years ago, Scott Lewison has seen the Osseo junior grow up in wrestling.

Lewison, a wrestling coach of 25 years and the last nine at Osseo, began coaching Jacob Meissner when he was four years old and saw his potential at a young age.

“Jake grew up with talent and drive. Without the drive, you don’t do the extra things and you don’t get to the level you want to get at,” Lewison said. The natural talent that Lewison sees is not a secret. He is very strong, quick on his feet, and deceptive. “Jake is a great athlete, and that ties over to being a good wrestler.”

While Meissner was a little unsure of his chances in the 220-pound class, Lewison liked his odds, at either 220 or 195 pounds. “We felt he could win it in either weight class.”

As soon as he and Johnson were tussling and twisting out of bounds, Jacob Meissner felt something was wrong. “I thought, ‘oh no,’” he said. He knew it was the ankle.

After taking an injury break, Meissner stood back up, went in the center, and pushed off with his injured ankle. While not 100%, he continued the match, at the time ahead of Johnson 3-2.

He continued to battle even with the pain, determined to not waste this chance at a state crown. Later on, he found himself on top of Johnson, and the reality of victory started to set in. At that moment, hours of training flew by his mind in seconds. All the running, weight training, and hard practices with his partner and friend Jagger Schack.

Schack has been Meissner’s practice partner for three years. A successful wrestler in his own right, the Osseo senior took home fifth place at the state tournament in the Class AAA 285-pound division and is planning to wrestle at Augsburg University next year.

For all the time they spend on the mat, Schack and Meissner enjoy the time off as well. On weekends, they always hang out at one of their homes or grab food together. Since their two families have known each other for a decade, the synergy they have with one another translates even more easily to the wrestling arena.

“Iron sharpens iron,” Schack said. “The more we practice, the better we both get. That shows in the season.”

“We push each other to do our best,” Meissner said.

“I don’t think Jake could have won without Jagger this year,” Rachael Meissner said.

By the end of the three periods, Meissner had defeated Johnson 5-3 and claimed the state title, Osseo’s first state champion since 1997. “I didn’t know what to feel,” Jacob Meissner said. “All that hard work didn’t go to waste,” he said

But also at that moment, he understood that the feat he just accomplished was not based on him alone. “It was the Lord allowing me to do that. I know without Him, I wouldn’t even be here.”

Up in the bleachers, his dad and mom were cheering louder than ever and after the match ended, Meissner greeted his parents with a big bear hug, even with a few tears.

“I told him I loved him and was proud of him,” Rachael Meissner said.

“I couldn’t believe it,” Ryan Meissner added. “It was really a joy to experience and see him do it.”

As a junior, winning the state championship may be the pinnacle of a high school career. So what does Jacob Meissner aspire to for an encore performance next season? “I want to have an undefeated season,” he said. And yes, hopefully another state title.

Where Jacob Meissner goes beyond high school is still up in the air. But if the combination of talent and drive remains, there’s no telling where it could take him. “If that drive is there,” Lewison said, “I truly think the sky’s the limit.