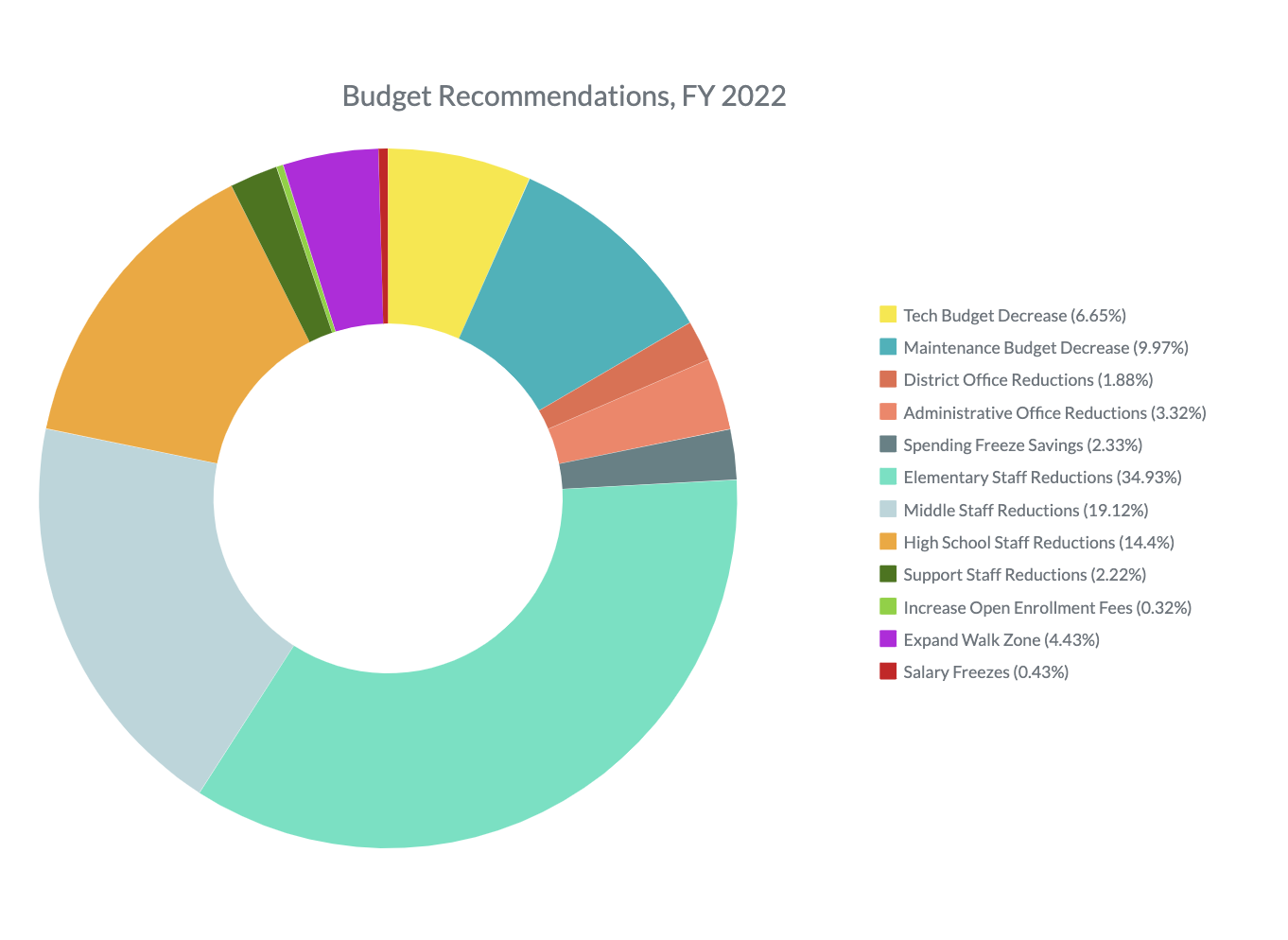 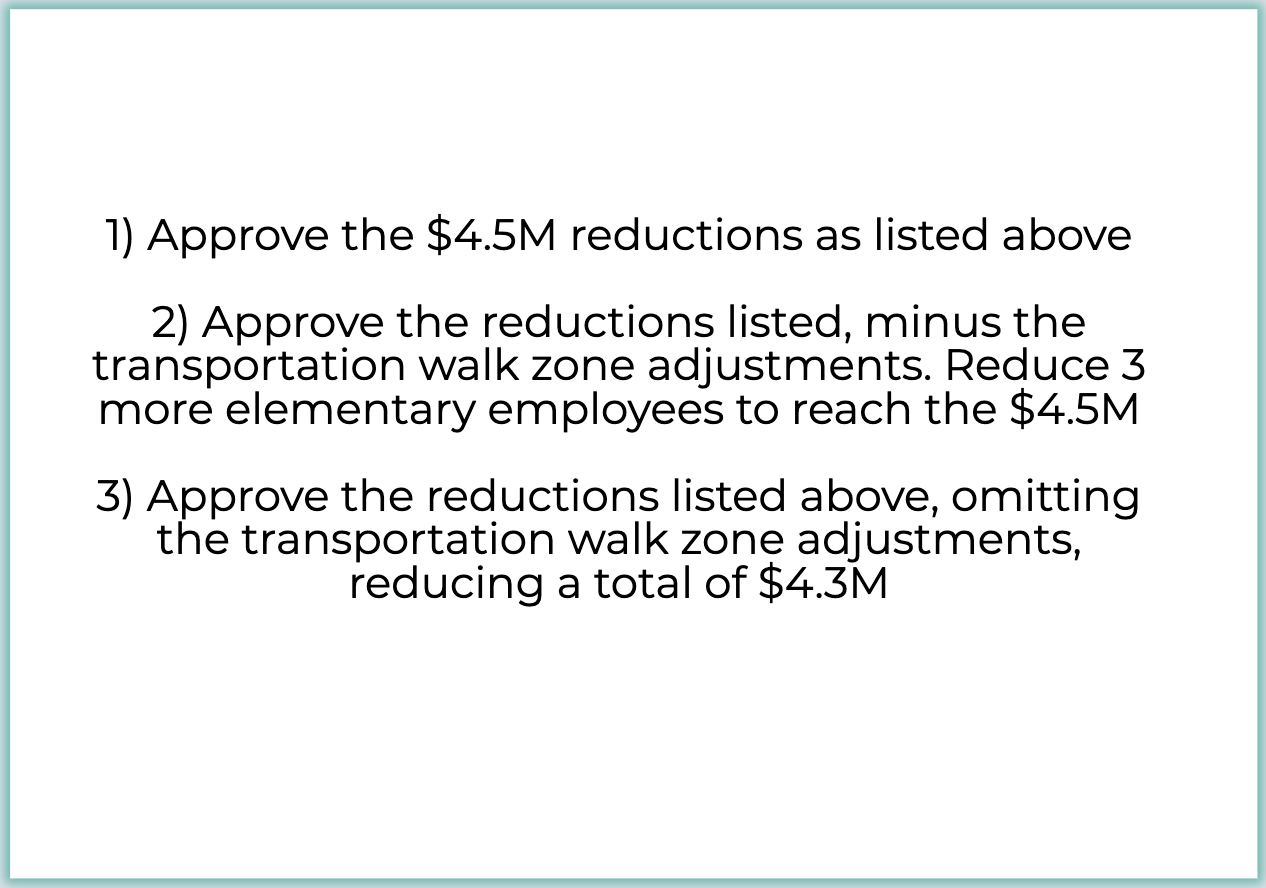 The three suggested options for the board. 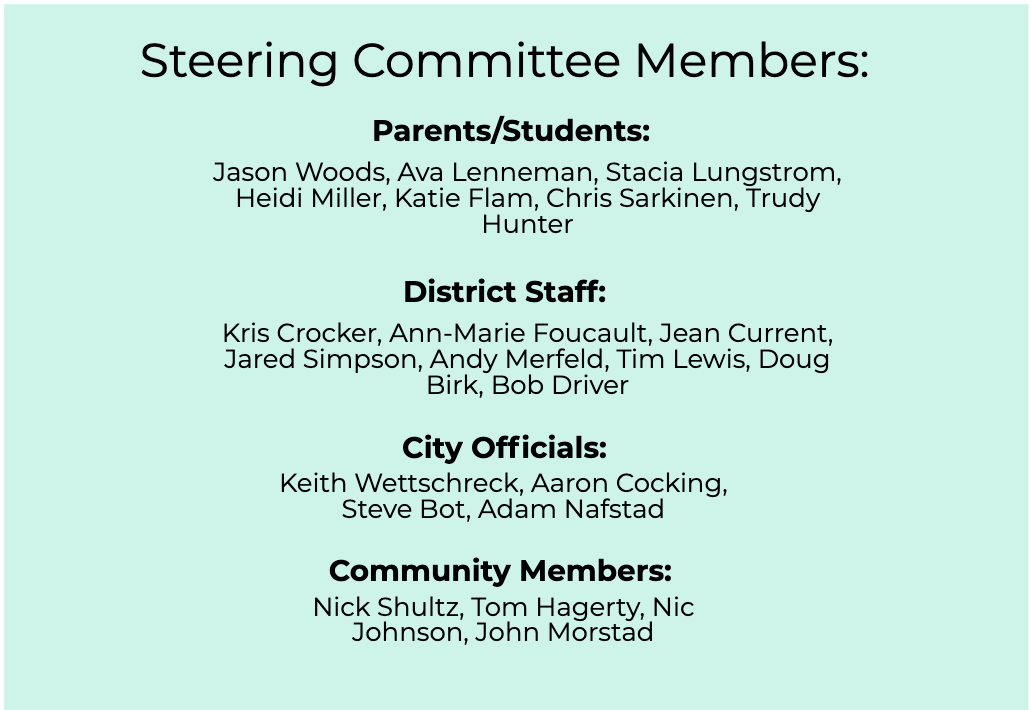 The three suggested options for the board.

Marking the beginning of a series of budget cuts, the St. Michael-Albertville School Board met March 15 to start addressing the district’s massive deficit. Emotionally-charged but nonetheless necessary, the board was presented with a series of decisions to help the district inch toward its goal of $4.5 million in budget reductions. The STMA Finance Advisory Committee put together three options for the board to reach these reductions, as well as proposing the idea of an operating referendum this fall.

The first speaker, Jen Penserga, is a Middle School West choir teacher. Her husband is also employed by the STMA music department, and both of their jobs are on the line with these cuts. She called the decision to lay off teachers “heartbreaking,” and pleaded that the board hire back the teachers who will be laid off as soon as they can once the financial situation improves.

The second speaker, Nick Johnson, has three children in the STMA district and has been serving on the district’s Finance Advisory Committee throughout this process. He was particularly concerned with the board’s consideration of expanding the district’s walk zone to cut down on transportation costs, noting concerns of safety and decreased enrollment if implemented.

The last speaker, Mary Behn, also has three children in the district, all of whom are currently distance learning. Behn attested to the hard working teachers that will be impacted, particularly the music department and its impact on her children.

“I just want to bring from a parent and student point of view how important the music has been in our families. Like every skill, language, [and] sport, the kids in music have worked very, very hard to learn a new language, to learn a new instrument,” she said. “It is the highlight for a lot of those kids. It brings them joy, it keeps their mental health up, it’s another way for them to communicate, so I just want you to also think about it from the parent point of view.”

“These teachers work so hard for the district, and for our students and our families, so please work as hard when you have the ability to get those staff back and the attention to those students that they deserve,” she added.

Superintendent Foucault explained that the cuts to the music department are based on decreases in enrollment — so teachers will be cut — but the programs themselves will not.

The School Board then went over the Finance Advisory Committee’s recommendations for budget cuts to the General Fund, which can be broken down as shown in the graph attached.

After going over the technicalities, Chairperson Drew Scherber chimed in to explain why staffing adjustments are necessary for the district.

“80% or more of our district’s expenses are comprised of salaries and benefits,” he said. “So while this is obviously a difficult decision, we run a lean machine … It really doesn’t leave us much of an option.”

It is projected that, with these general fund cuts, about 40-50 staff members will be at risk of being laid off.

Additionally, the idea of expanding the district’s walk zone was a shared concern among the Finance Advisory Committee and the School Board, further guiding their budget cut decisions as this expansion would have covered about $200,000 in cuts.

Each board member spoke to which of the three proposed options (see attached) they were advocating for, and were given the chance to ask any outstanding questions about the finances and required reductions.

Boardmember Carol Steffens was first, and asked about the proposed staff reductions, as she was confused about the breakdown between cuts in FTE (full-time employees) and support staff. Superintendent Ann-Marie Foucault explained.

“It is really important to note that this is the general fund, this is fund one. Most of our support staff are in fund four, which is community ed, or fund two, which is food service or special education support staff,” she said. “Those support staff … we haven’t gotten to those staff yet.”

“We are working on the largest, $70 million general fund first, and then we will get to those,” she continued. “I hate to say it, but I anticipate massive layoffs in the support staff when we do get to those budgets.”

Superintendent Foucault anticipates they will review those other funds and make cuts accordingly in April or May.

Boardmember Hollee Saville then reiterated that she is against expanding the walk zone to save a bit in transportation costs, for both safety and equity reasons. In particular, the expanded walk zone would impact low-income students in more ways than one.

“I don’t want where a child lives to determine their ability to succeed in school, that’s not right,” said Saville. “And we say that all the time when it comes to being the lowest funded district, and so to cut that walk zone … I would rather find more creative ways.”

Treasurer Tim Lewis agreed with Saville, and shared his thoughts on the “perfect storm” of a financial crisis the district is facing.

“None of us ran for School Board with the intention of wanting to make massive cuts,” he said. “The hard part comes in setting that emotion aside, as hard as that can be because obviously there are people, there are students, that are impacted as a result of that.”

He continued, “The unrewarding part is that a decision needs to be made, not even just for this year, but for next year and future years beyond that.”

Vice-Chairperson Kari Dwinnell and Director Larry Sorenson agreed that they think option three is the best given the circumstances.

“I don’t want anyone to think this happened overnight,” said Dwinnell.

Chairperson Scherber agreed with the rest of the members, and the third option for budget reductions was approved across the board.

“It just makes me want to cry,” said Saville after approval.

Superintendent Foucault also shared an Operating Referendum timeline with the board, in addition to an extensive communication plan to help guide messaging with the community.

This communication plan is mapped out until Nov. 2, which would be election day, and the timeline recognizes the important milestones in establishing the potential operating referendum. Similarly, administration have put together a web page dedicated to the referendum, as well as an 8+ page living document of frequently asked questions, which can be accessed at: bit.ly/30YySr9

The Steering Committee is set to make a recommendation to the School Board for potential action at its Aug. 2 meeting.

For further questions or concerns regarding the levy, people can contact the district at STMAlevy@mystma.org

In accordance with the budget cuts outlined above, the School Board also had to approve of its bare minimum costs to keep the schools operating. A spending freezing has been implemented, but these other costs are necessary and thus were all approved.

The technology budget was reduced as much as possible, and the facilities and grounds budget was provided just enough to maintain existing facilities. The district also paid its dues to the Wright Technological Center.

“Every year there is not enough money in this budget, and this year is even harder,” said Superintendent Foucault. “We just did the essentials.”

“We overturned every possible budget line item we could so that we could save staff FTEs,” she continued. “We did everything we could to protect staff, and that is important because, as we’ve all said tonight, these people are our family, these are our friends, these are our colleagues and it is hard.”

The School Board will be participating in a Joint Governance Meeting on March 29 with the cities of Albertville and St. Michael to notify council members of the situation.