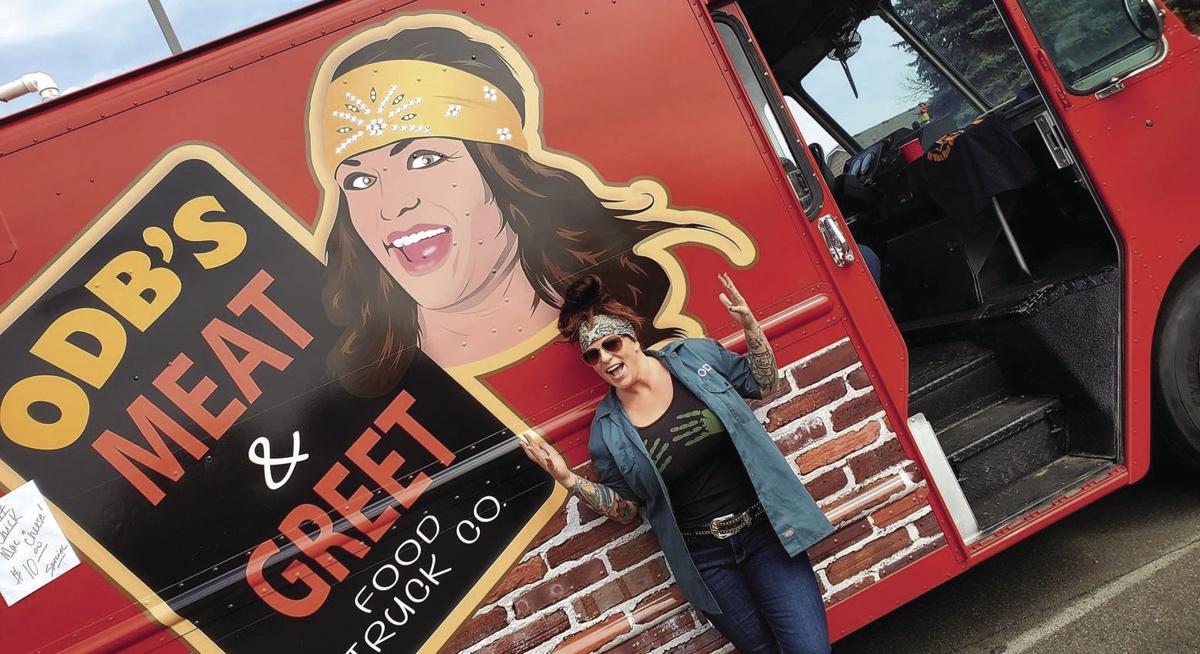 Jessie Kresa, also known as ODB, and a 1996 Osseo graduate, serves up some barbecue goodies from her food truck. 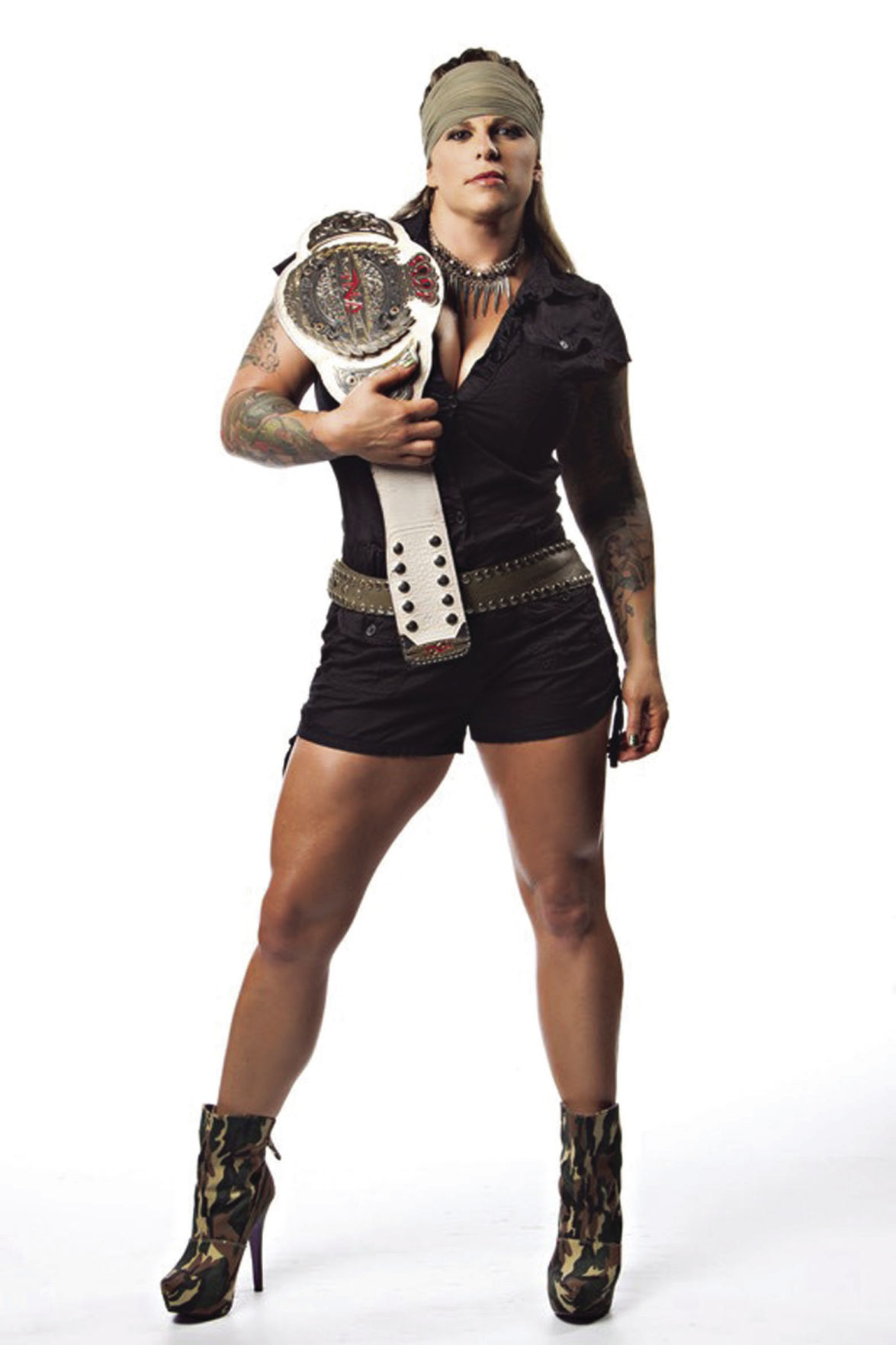 Jessie Kresa made a career as pro-wrestler named ODB in TNA Impact wrestling.

Jessie Kresa, also known as ODB, and a 1996 Osseo graduate, serves up some barbecue goodies from her food truck.

Jessie Kresa made a career as pro-wrestler named ODB in TNA Impact wrestling.

An Osseo Senior High grad has been living her dreams during some incredible adventures ranging from working at Disney World to becoming a pro-wrestler. Her most recent adventure has been bringing food and fun to the Twin Cities area via her food truck.

Jessie Kresa, a 1996 graduate of Osseo Senior High School, grew up on the Osseo/Maple Grove border. She was on the first Osseo girls high school hockey team in 1994. “I played goalie,” she said. “Then in my senior year, I was the captain and MVP.”

After high school, Kresa went to St. Cloud State University to play hockey for a couple of years. When she was a junior, life presented a new opportunity. “During my second year at St. Cloud there were internships available to work at Disney World for six months,” she said. “It was always a dream of mine to work at Disney. So, I applied and interviewed for the job while at St. Cloud State. Then, I got the job.”

Kresa spent two years working at Disney World. She worked on the Jungle Cruise and later at Animal Kingdom when it first opened.

“I stayed out in Florida for a year,” she said. “It was a fun experience. I came back home to Minnesota and started bartending.”

It was about this time when Kresa had a new dream. “I wanted to be a pro-wrestler when I was little,” she said. “My parents would take my brother and I shows. I saw Hulk Hogan and I thought it was so cool.”

She first tried out for WWF Tough Enough in 2000, which was a reality TV series on MTV. She created her wrestling persona, ODB. She made the top 25 but missed the chance for the final cut for the show.

“That was my first experience,” she said. “I had no training. I only had my ODB video. So, I came home and trained.”

She trained with Eddie Sharkey, an American professional wrestling trainer who has trained wrestlers the Road Warriors and Madusa.

“The training was hard and you have to ‘pay your dues,’” she added.

Her first match was in 2001 at Grumpy’s Bar in Minneapolis, where she “fell in love” with pro-wrestling.

In 2007, Kresa got her big break. She signed a contract with TNA (Total Nonstop Action) Impact wrestling. “ODB took off from there,” she said. “I was different from other girls. I was more relatable.”

Kresa stayed with TNA Impact until 2016. “It was a solid career,” she said. “I traveled the world and got to see a lot of places.”

Kresa has also been working on expanding her ODB brand into the BBQ world. She created a line of whiskey-based BBQ sauces and hot sauce.

She traveled around the country in her Airstream trailer promoting her ODB sauces, including at festivals and big bike weeks.

Kresa was featured on an episode of Joey Fatone’s “My Family Recipe Rocks!” in 2015. “He wanted me to be on the show and said he wanted to come out to my Airstream trailer and cook,” she said. “We filmed an episode right in my trailer. We had a blast cooking some Minnesota food.”

In 2017 she decided to get a food truck while living in Dayton Beach, Florida. “I bought a small trailer and sat down with chefs I knew about recipe ideas,” she said. “They told me to keep it simple and to start with what I could do. The first year wasn’t great, but I learned from my mistakes.”

She spent a year in Daytona Beach with the truck before coming back to Minnesota. Since she’s been back, Kresa said she’s been doing amazing. “Food trucks are special here,” she said. “You have trucks all over the metro and with many different food choices.”

She has stuck with her favorites — down-home barbecue.

Kresa’s first food truck burned to the ground last September. But she was able to get a new food truck a few months ago with the help of her friends in the pro-wrestling community, supporters and fans. “This truck is my dream truck,” she said. “It was sad, but it was meant to be.”

During the pandemic, she has taken up a new way to bring her food truck to the metro area. Kresa is looking for places to set up through her ODB Meat and Greet Facebook page. “I have some good family and friends,” she said. “I have set up my truck in neighborhoods, just like the ice cream man, and I have had 100 to 140 people show up.”

She added that people are good about social distancing. She even provides online ordering.

“It’s been a great thing,” she said. “I like helping people smile. And having my truck in neighborhoods has helped people meet their neighbors safely. It makes me smile.”