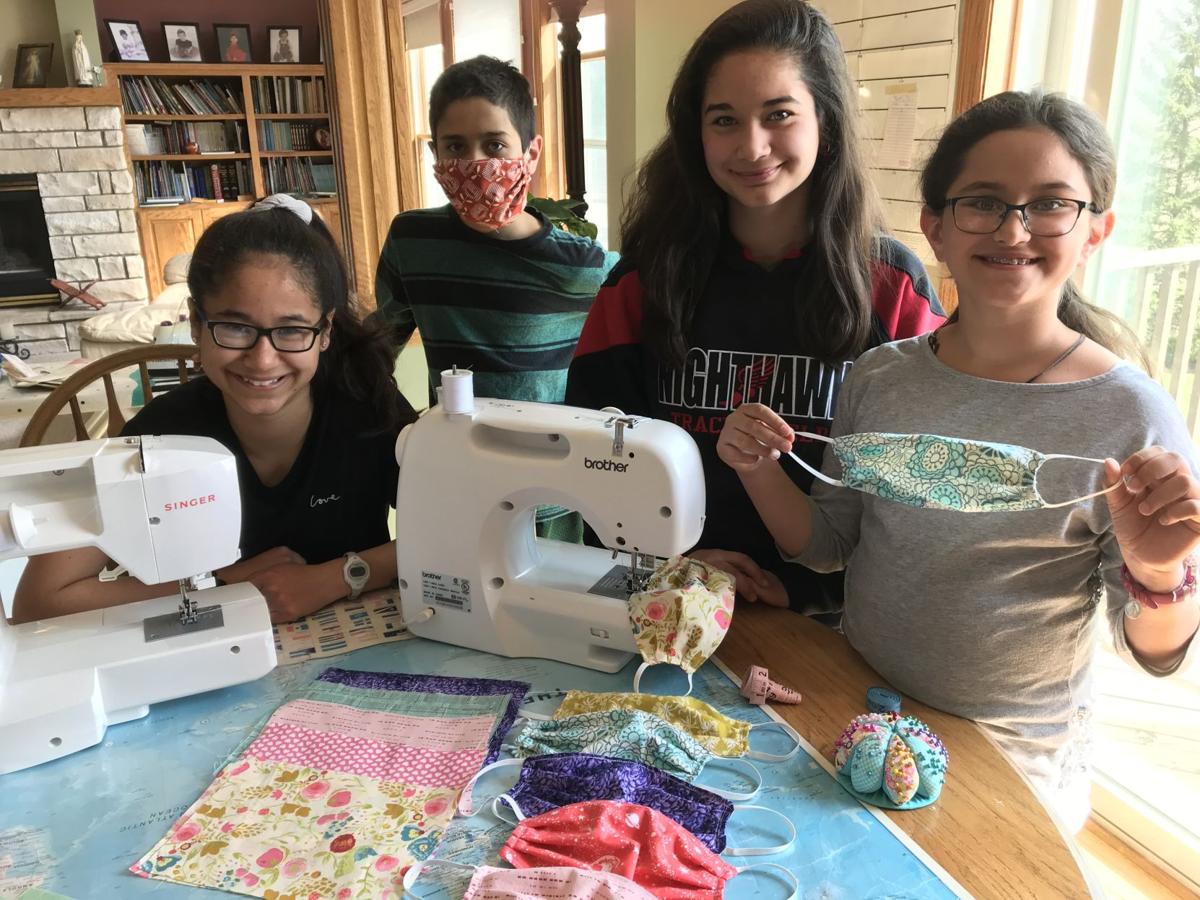 The Plotts family shows off some of the masks they have sewn for caregivers workers as part of an ongoing service project by the Northwest Nighthawks, a cross-country and track team comprised of home school students from St. Michael, Albertville, Hanover, Rockford and the surrounding communities. (Submitted photo) 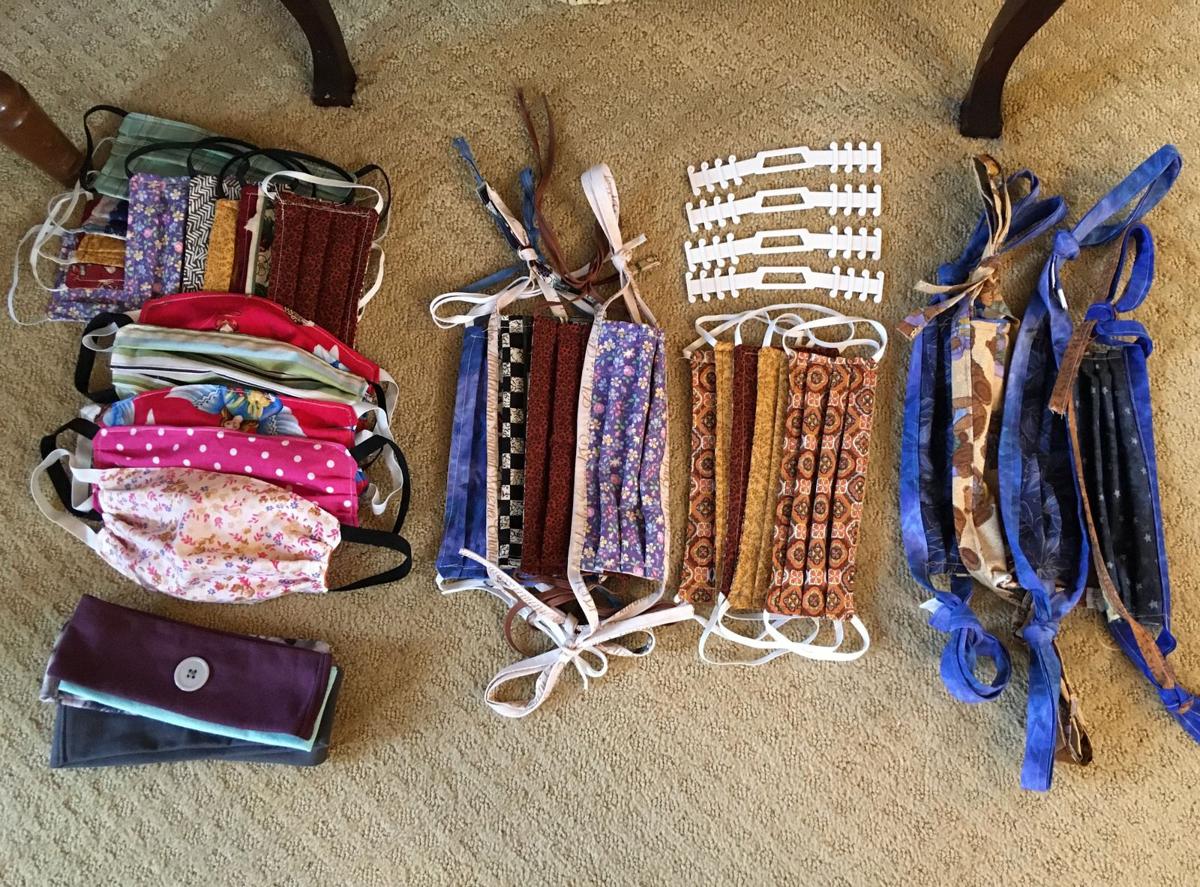 A sampling of the products the Northwest Nighthawks have donated to area nursing homes and clinics, including masks and sewn-button ear-savers (lower left). The white items at upper right are the 3D printed ear-savers the Nighthawks have produced. (Submitted photo)

The Plotts family shows off some of the masks they have sewn for caregivers workers as part of an ongoing service project by the Northwest Nighthawks, a cross-country and track team comprised of home school students from St. Michael, Albertville, Hanover, Rockford and the surrounding communities. (Submitted photo)

A sampling of the products the Northwest Nighthawks have donated to area nursing homes and clinics, including masks and sewn-button ear-savers (lower left). The white items at upper right are the 3D printed ear-savers the Nighthawks have produced. (Submitted photo)

When Gov. Tim Walz announced on April 23 that Minnesota schools would remain closed for the rest of the spring semester to help stem the tide of the COVID-19 pandemic, the move effectively ended any hope of a spring season for high school athletes, since the Minnesota State High School League had pegged any spring competition to a decision by the government to reopen the schools. Athletes now know officially that they will not be able to compete with their classmates until the fall, and seniors know that at least the high school segment of their athletic careers has come to a premature end.

School sports had been in lockdown since March, but spring teams were still considered to be “in season,” which meant athletes and coaches were still subject to various MSHSL restrictions on what they could and couldn’t do while the schools were closed. A certain amount of “distance coaching” was allowed, for example, though coaches could not make any practice or workout mandatory.

Such rules only apply to athletic activities, of course: During the lockdown, the Northwest Nighthawks – a team of homeschooled cross-country and track athletes from St. Michael, Albertville, Rockford and the surrounding area – has been doing everything they can to help its community with a number of service projects that have provided personal protection masks and related items to area healthcare workers.

For a seemingly humble program run from the Hanover farm of Kirk and Jennifer Swanson, head coach and athletic director, respectively, the Nighthawks have sent an impressive number of athletes to state competition over the past several years. Last fall, Luke Swanson and Jeremiah Gavin advanced to the Class A boys state cross-country championship meet and, Margaret Myskowski qualified for the girls state meet.

Although they won’t be able to take to the track this spring, the Nighthawks will be sewing masks and providing “ear-savers” to frontline workers – a project that was well underway even before the season was officially canceled.

“We just asked ourselves, what can we do to help?” Jennifer Swanson said. “Being involved and serving the community is one of the things that we emphasize in our program.”

The need for personal protection masks is well-documented; the state of Minnesota ran a big drive for masks last Saturday. Nighthawk athletes and family members who know how to sew or were willing to learn have been producing cloth masks and ear-saver headbands for the last several weeks. The headbands have a button sewn on the each side to hold the elastic bands of the mask, which can in some cases cause irritation or put pressure on the wearers’ ears when worn the normal way.

Most of the equipment the Nighthawks produce has gone to nursing homes and senior in-home care organizations, with some going to area clinics. The Nighthawks’ ear-saver project has a traditional process above, and an alternative “high-tech” version. The Nighthawks have access to a 3D printer, which can be used to produce an alternative form of ear-saver that clutches the mask’s elastic band behind the wearer’s head. Nighthawk runner Luke Swanson is leading that project and is also working on improving mask designs for better fits, and is 3D printing new tools to help the sewists out as well.

“We’re coordinating with people around the state on some of these experimental things, and it could help a lot of people if we can pull [the improvements] off,” Jennifer Swanson said.

Younger siblings of team members are also helping out by cutting cloth and elastic bands to be made into masks by their sisters and brothers.

“There are a lot of little things people can do,” Jennifer Swanson said. “If they can’t do a whole mask by themselves, they can do pieces of the project.”

As of the end of last week, the Nighthawks had produced over 300 masks and 150 ear-savers with more coming every day – Swanson herself was working on masks even as she was interviewed for this article. Naturally, though, the team had in the back of its mind the hope that it might be able to run a competitive season this spring, even if in a curtailed form.

The team was still putting in the miles and training hard while holding out hope, but late last week, the athletes and their counterparts all across the state learned officially that they would not be able to compete until at least the fall.

“It’s difficult, because these kids work so hard,” Swanson said. “We all have been bracing ourselves for this possibility, but we still held out some hope as long as it was out there. The kids and coaches are all hurting now that the season is officially over. Students are handling the academic side well, but they are home educated and accustomed to being out in the community, participating in activities, hanging out with friends, etc. The prospect of further isolation and being unable to compete or practice as a team is pretty tough. Yes, there are worse things that could happen; yes, there will be redemption; but the loss of a dream is real, and we need to acknowledge that.”

Even so, Swanson emphasizes the positives of the current situation. Athletes who put in the legwork now and throughout the summer may not be able to enjoy the fruits of their hard work on the track this spring, but they will be that much more prepared to shine on the cross-country course this fall and on the track a year from now, which is true for athletes who will don Nighthawk red next school year as well as some who will be running for college programs. Former Nighthawks have already made a splash in the NCAA ranks: 2019 alum Erika Swanson was already one of the top runners for the Bethel University women’s cross-country team last fall.

“We’ve been saying all along that the work they put in is not wasted time,” Jennifer Swanson said. “It will be a benefit for future season; your body remembers.”

One aspect of the COVID-19 lockdown that is not quite as much of an adjustment for the Nighthawks, naturally, is the fact of learning at home. Team members and parents were used to that, obviously, though Jennifer Swanson has sympathy for those parents who have been thrown into the home schooling game unexpectedly.

“We want to encourage those who been thrown into virtual schooling,” Swanson said. “Teachers, parents and students, you are crisis schooling, not home schooling. Please give yourself grace, knowing that you are doing the best that you can.”

The academic process hasn’t changed much for the Nighthawks, but the lack of social opportunities stemming from the lack of in-person practices has been difficult. Team members and coaches can connect through teleconferencing and similar applications, but that can’t entirely replace real face-to-face contact. Sibling teammates are able to run together, but social distancing requirements mean that most teammates are unable to see each other in person.

“We’ve tried to continue what we’ve always done as coaches in the lives of these kids, in helping them keep those friendships with the people they would be spending hours running with every week,” Swanson said. “Maintaining that community in a virtual environment is pretty challenging, but we’ve been doing it for six weeks now and the kids are still hanging on.”

The coaches are also looking at taking advantage of online clinics and programs being offered by the MSHSL for professional training, so that even in the absence of competition, all time will be well-spent.Even in this strange era, the Nighthawks will continue to work hard on their academics, their athletics and their service projects, waiting as we all are for life to return to normal. In the meantime, the Nighthawks have one last positive thing to report: With restaurants, theaters and other entertainments locked down by government order, the athletes have noticed an uptick in the number of people they see out running.

“You’ll see one of your own athletes running down the road and it breaks your heart that you can’t have contact, but then the kids also say, ‘where did all these runners come from?’” Swanson said. “It’s good to get out there these days, because you’ll be healthier.”