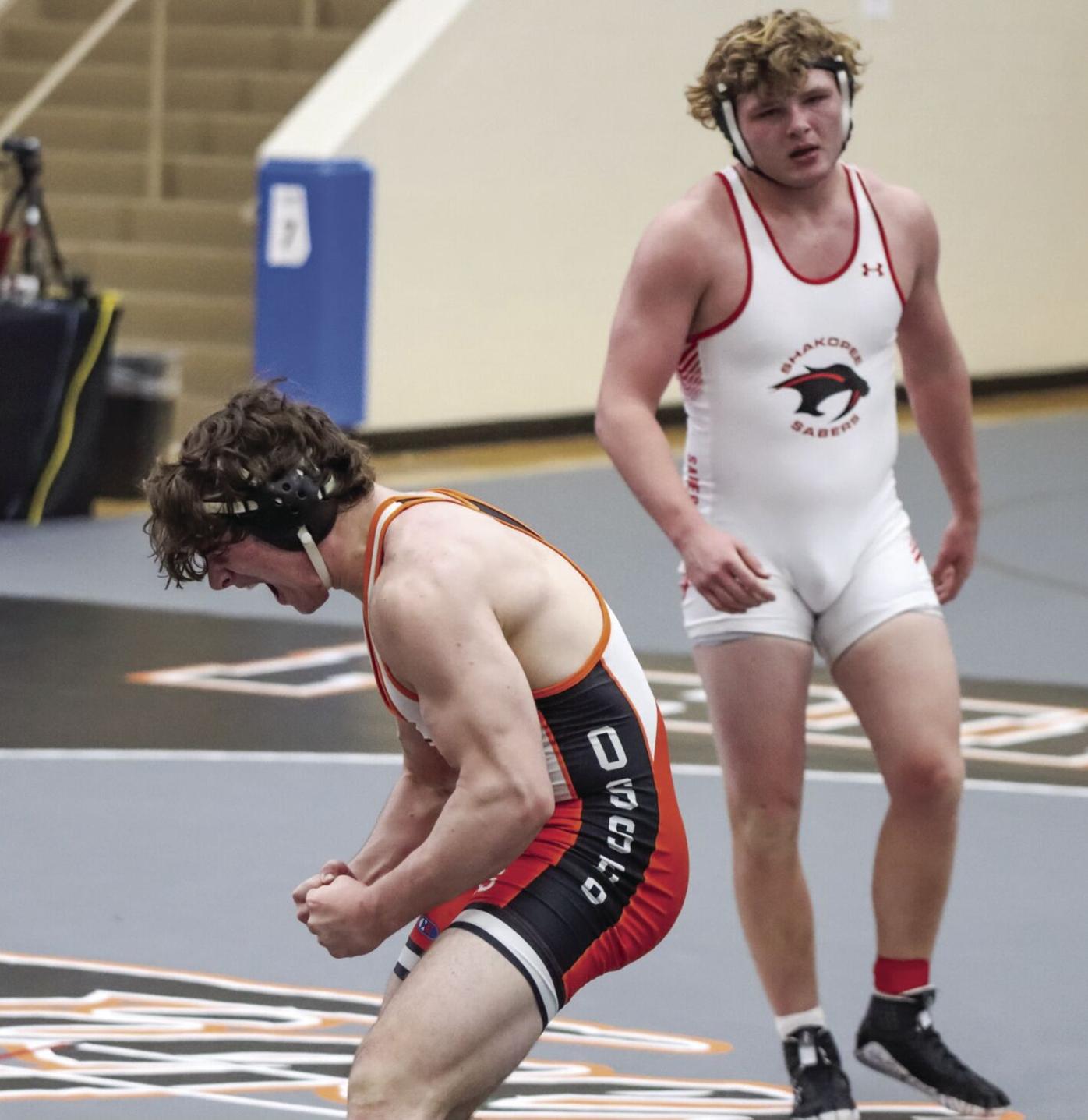 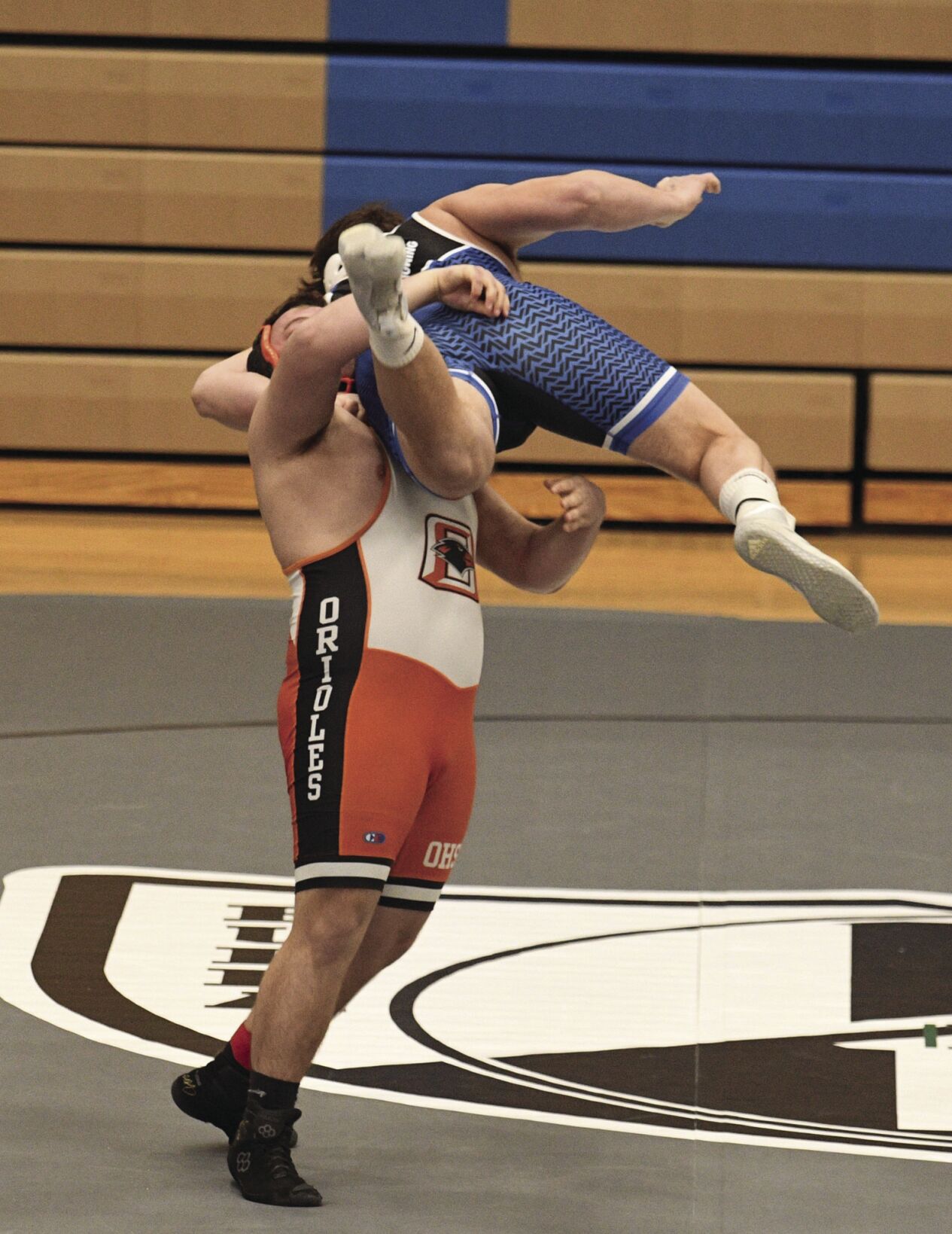 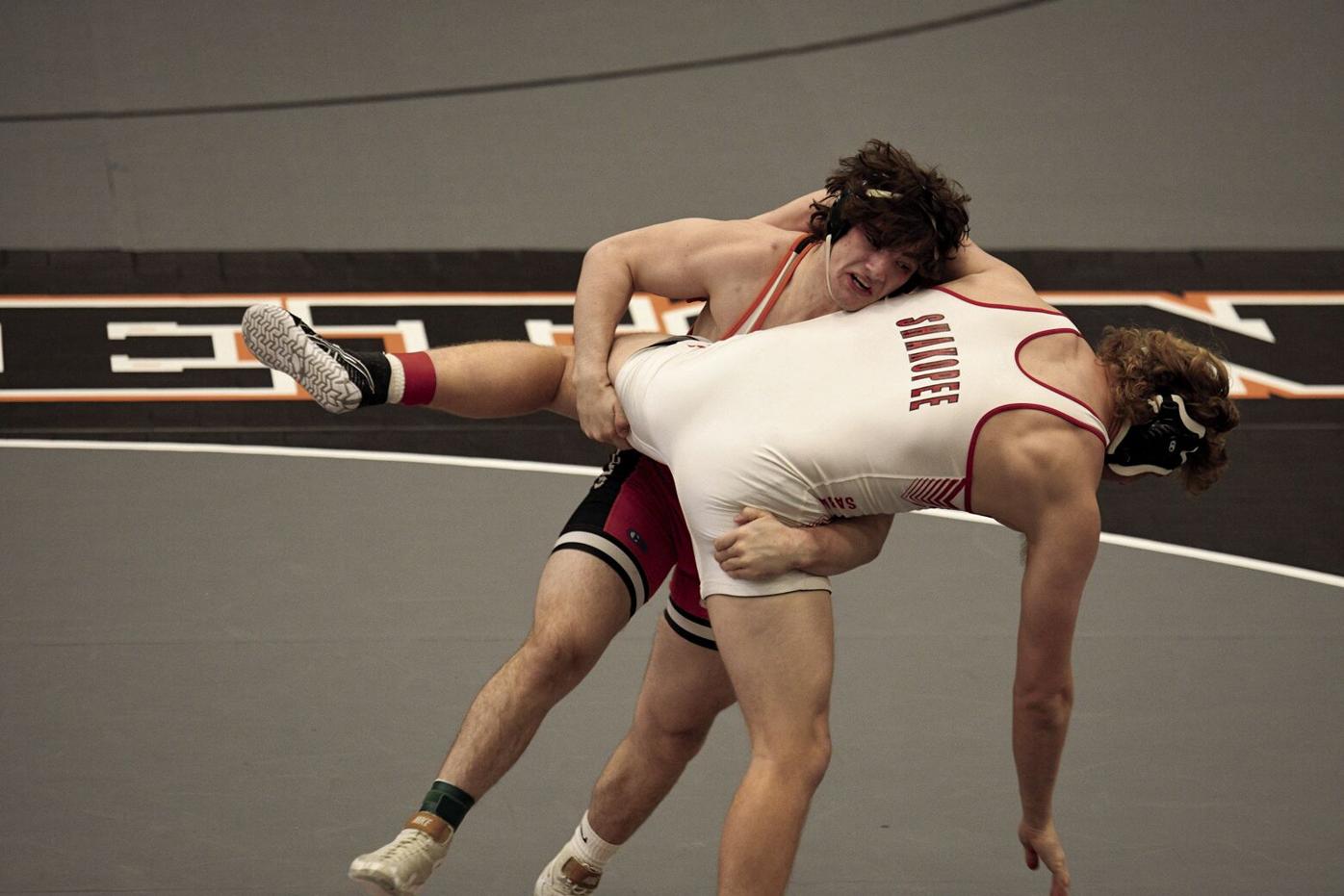 Jacob Meissner takes down Tommy Johnson of Shakopee for the win. (Photos by Rachael Meissner)

Jacob Meissner takes down Tommy Johnson of Shakopee for the win. (Photos by Rachael Meissner)

Jacob Meissner realized his ultimate season goal in winning the 220 pound state title to cap off his junior year. Meissner advanced with a (5-3) quarter-final decision over New Prague’s Evan Anderson, setting the stage for a re-match of Saturday’s Super Section finals with 2020 state champion RJ Chakolis of Hopkins. The semi-final was close all the way, with the score tied 2-2 at the end of regulation. The match continued through three periods of overtime before Meissner scored the winning escape in ultimate overtime for a 3-2 win and a spot in the finals against #1 rated and unbeaten Tommy Johnson of Shakopee (34-0).

In the title match, Meissner scored first with a solid takedown in the opening period and led 3-2 in the third before putting it away with a late takedown for a 5-3 victory. Meissner becomes Osseo’s first State Champion since Kelly McConville in 1997.

“I worked hard this summer and fall going to tournaments that I thought would help me get better,” said Meissner. “I set a goal at the beginning of the season to win state. With the help of Jagger (my wrestling partner) and my coaches, I achieved the goal. I am so thankful we were able to have a season and I am also thankful for the opportunity Osseo gives me with our co-op to wrestle. I love being able to represent Maranatha Christian Academy and Osseo by winning state!”

Jagger Schack completed an outstanding high school career with a state fifth place finish at 285lbs. His lone set-back came in the quarter-finals against Eagan’s Diego Villeda in a match that went down to the wire (tied at three) before Villeda was able to score a late escape for a 4-3 decision. Schack wrestled back strong with a 5-3 decision over Kellen Stewart of Eastview, before finishing his high school wrestling career with his 25th fall of the season at 3:02 over Woodbury’s Thomas Moesenthin.

“State did not quite end how I had hoped, but I am glad we were able to have a season and the state tournament,” said Schack. “My experience with Osseo wrestling was great and I am glad to be part of their history and getting my name on the wall twice.”

Schack closes out his senior season with a 37-2 record and 25 falls. He stands in 7th place on Osseo’s all time varsity wins list with a record of 157-46, including 81 career falls. He’s a 2x “All State” Place-winner and 4x qualifier.

Junior Aidan Wayne made his first trip to the state meet and gained valuable experience for next year with his two bouts at 195 lbs. Wayne lost by a second period fall in his opening match to Forest Lake’s third rated senior Tyler Raway and later was eliminated in wrestle-backs by senior Kaden Streed of Willmar, after rallying from an early deficit to nearly pin Streed in the second period but ultimately lost by a decision. Wayne finished with a 29-10 season record, with 21 falls and a Super Section title.

“We are proud of all the kids for all the hard work they put in during this difficult year,” commented Co-Head Coach Scott Lewison. “Getting Osseo’s first state champion in 24 years is very rewarding.”