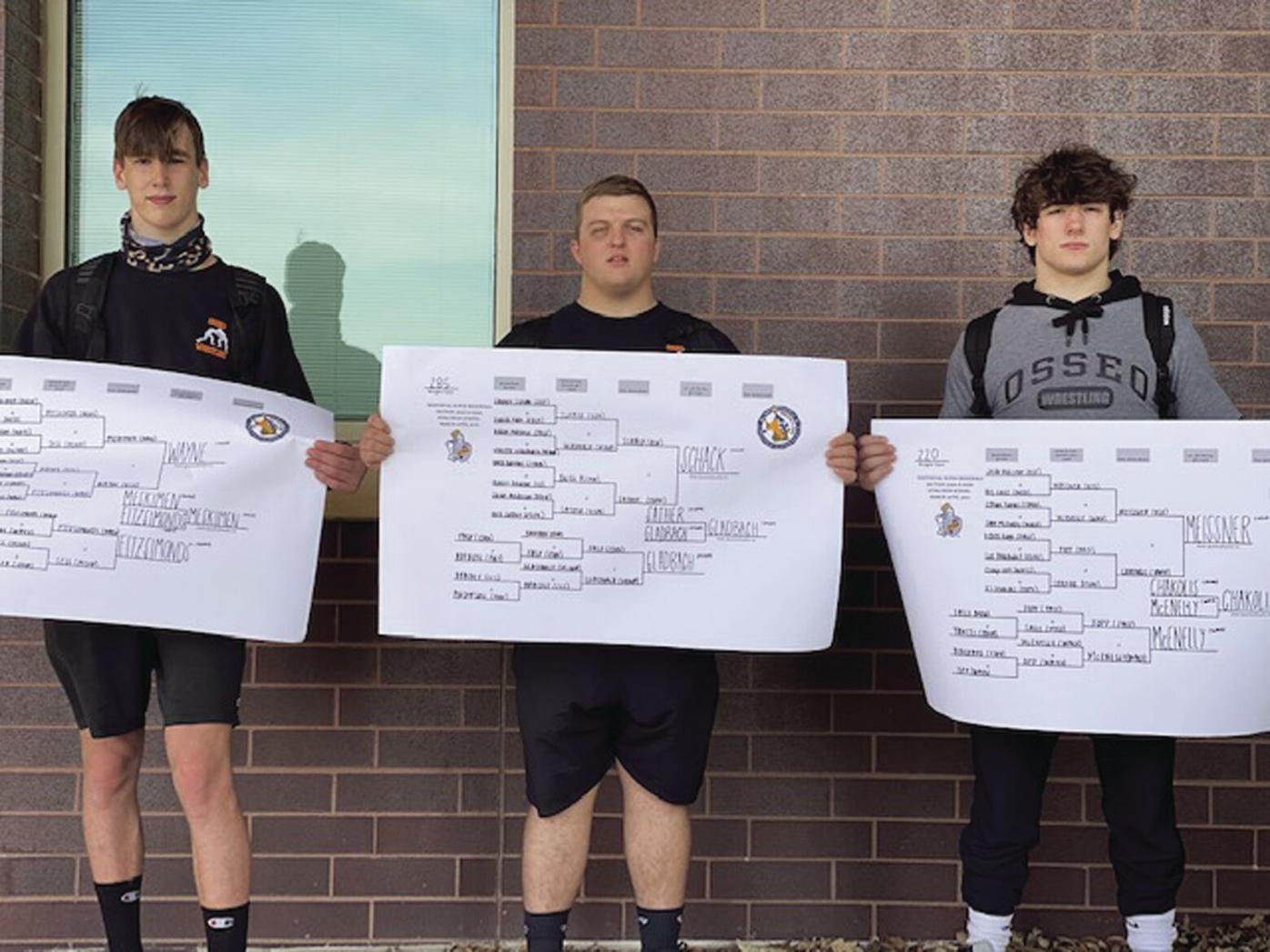 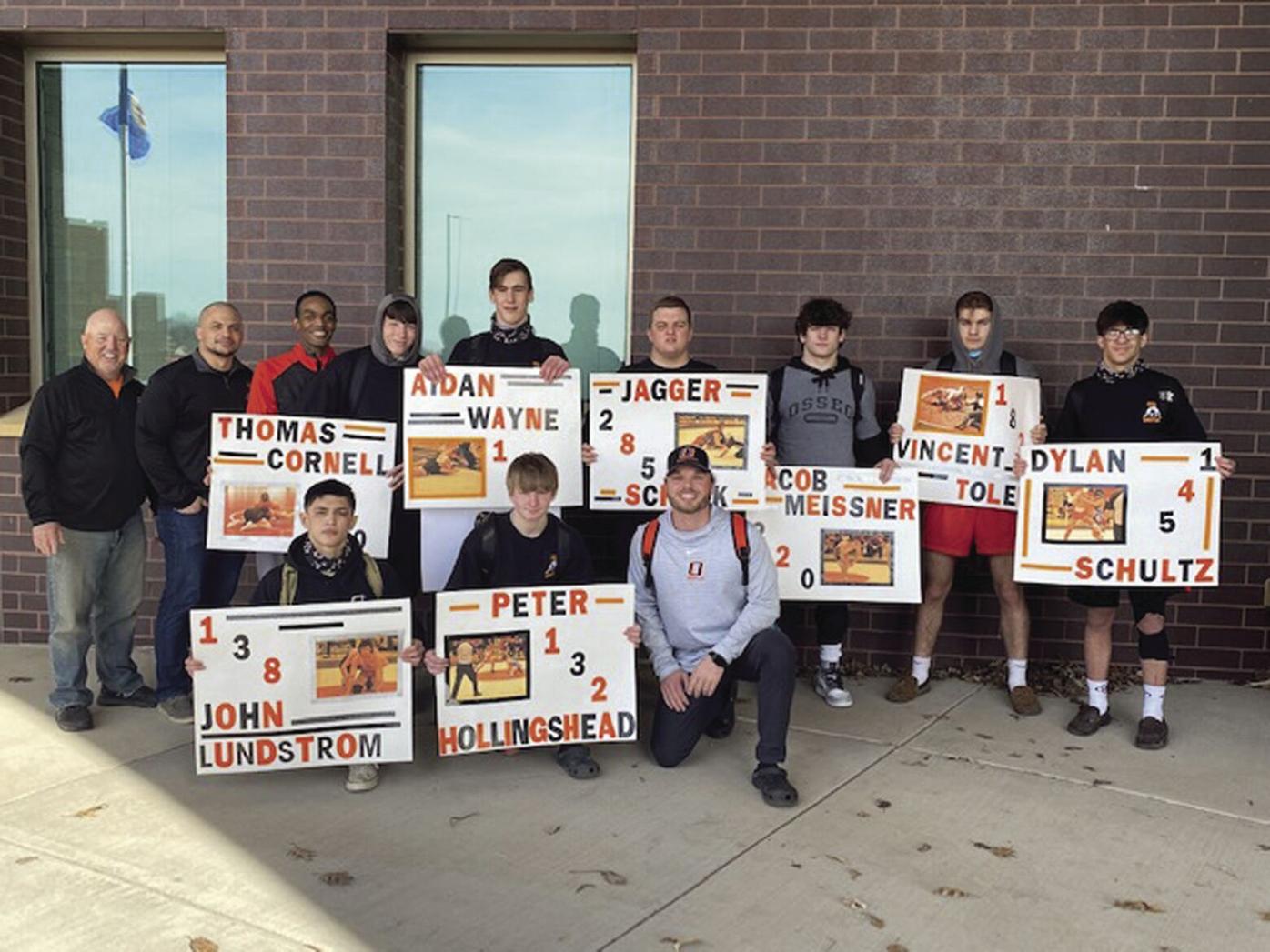 The Osseo wrestlers and coaches that made it to the State Qualifier that was on March 20.

The Osseo wrestlers and coaches that made it to the State Qualifier that was on March 20.

The Oriole matmen finished section competition with great success last week at STMA, with five State qualifiers and three advancing to the MSHSL final eight this Thursday, March 25, at St. Michael-Albertville High School. On Wednesday, March 17, a total of 10 Orioles qualified at the Section 5AAA tournament for the first ever “Super Section” (State Prelim). The team returned to St. Michael on Saturday, March 20, for the tournament involving the top four in each weight class from Sections 5 and 6.

State Qualifiers (Super Section) John Lundstrom (third at 138) opened with a 6-1 decision over Minnetonka, before falling to eventual champion and state #1 rated Cole Becker of STMA in the semis. Lundstrom bounced back with wins over Park Center (10-0) and Daniel Avre of Minneapolis South (5-0) in the third place final. The 2021 State Qualifier, record: 31-9.

Dylan Schultz (third at 145) won by decision (10-3) over Waconia before dropping his semi-final to eventual champion (#5) Pedro Velazquez of Chaska-Chanhassen. Schultz rebounded with decisions over Wayzata (10-5) and Waconia’s Bradee Dwindel (9-5) for the third place title. The 2021 State Qualifier, record: 32-4.

Three Orioles earned titles and will compete at the State Final Eight. Aidan Wayne entered Saturday’s action as the #3 seed at 195 and opened with a 1:00 fall over Edina, followed by a semi-final match-up with (9th rated) Bram Fitzsimmons of Waconia. The junior fell behind early against the top seed of Section 6 but kept battling back and in a dramatic finish, scored the winning takedown at the buzzer, for an 8-7 victory. Wayne also trailed early in the title round against Roger’s highly regarded senior Ross Meskimen before rallying with a flurry of offense to finish with a fall at 5:23 for the title and his first state appearance.

Jacob Meissner opened up Saturday at 220 with a quarter-final fall over Minneapolis South at 1:38, setting the stage for a semi-final match-up with Waconia senior, Sam McEnelly (state ranked #3). Meissner (fifth rated at 195) crafted a solid effort for a 3-2 decision to advance to the title round, where he would face yet another huge challenge in Hopkins’ senior RJ Chakolis, 2020 state champion (ranked #2). Meissner, set the pace with his usual relentless style, scoring three takedowns on his way to a 7-3 championship victory and his third state appearance. Jacob placed 4th at state last year at 170.

Jagger Schack (ranked second at 285) left know doubt of his intention to return to the state meet for a fourth time, recording falls over Edina in 20 seconds and Minneapolis Washburn at 2:40, before claiming the title in decisive fashion, with a first period fall at 1:30 over Eden Prairie standout (6th rated) Will Sather. Jagger placed fourth at state a year ago at 220.

Class 3A state quarter-final pairings (Thursday, March 25) at STMA 2 p.m. include the following: