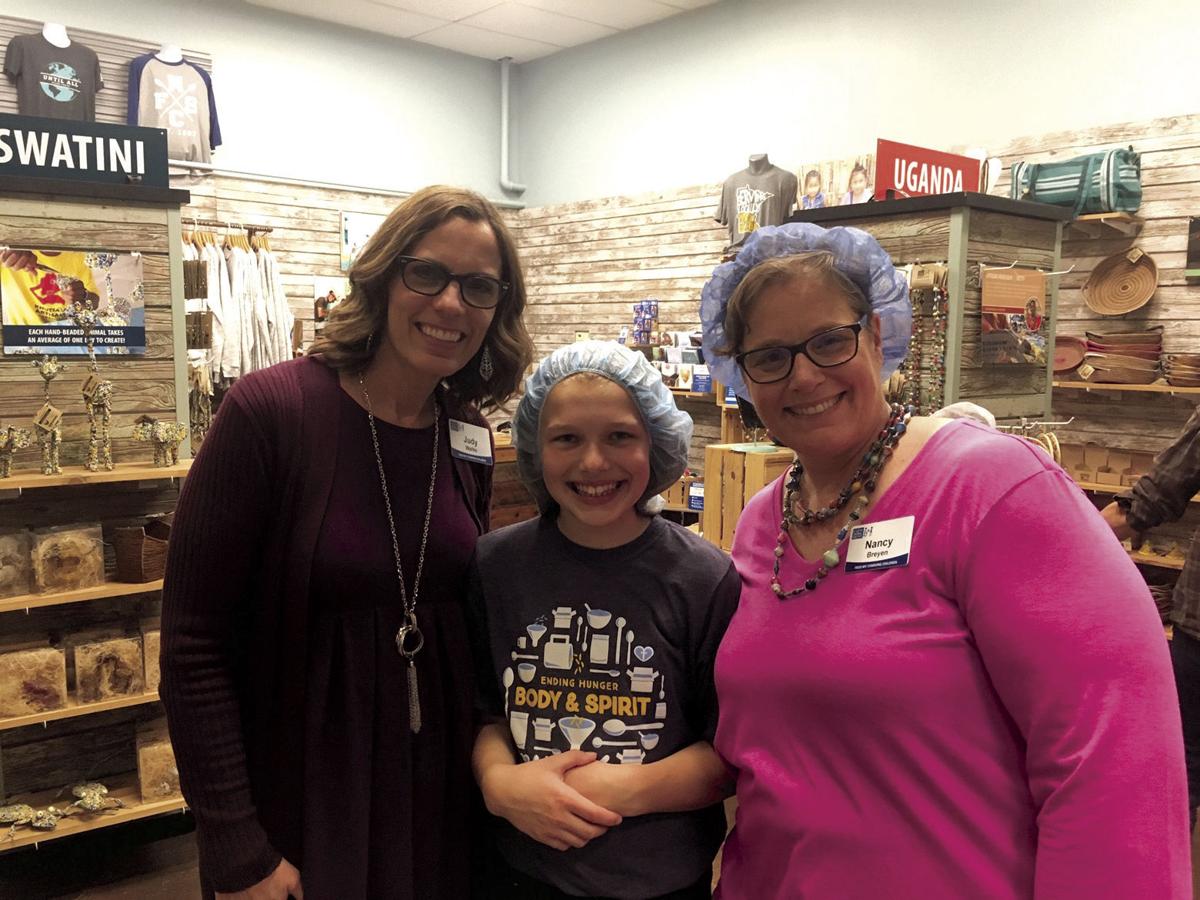 Aubrey Steel, center, is an 11-year-old from Maple Grove who has been recognized as an outstanding volunteer for Feed My Starving Children. She and three other volunteers are leading the way for the second annual Better Together event June 7 and 8 in St. Paul. Also pictured with Aubrey are Judy Watke, Development Manager at FMSC, and Nancy Breyen, Development Representative at FMSC packing at the Coon Rapids FMSC. 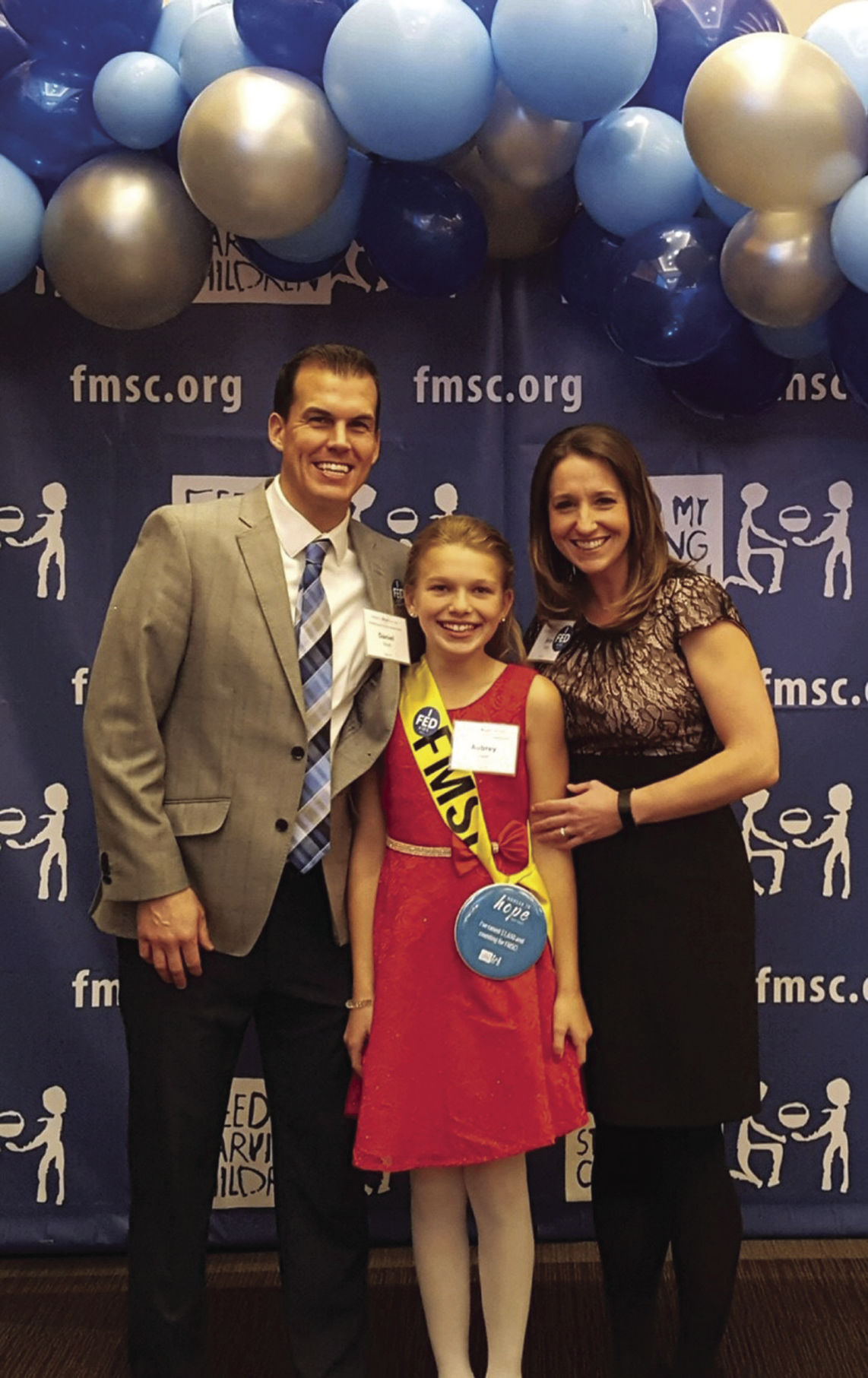 Dan, Aubrey and Bree Steel at the Feed My Starving Children Gala at the Minneapolis Convention Center. 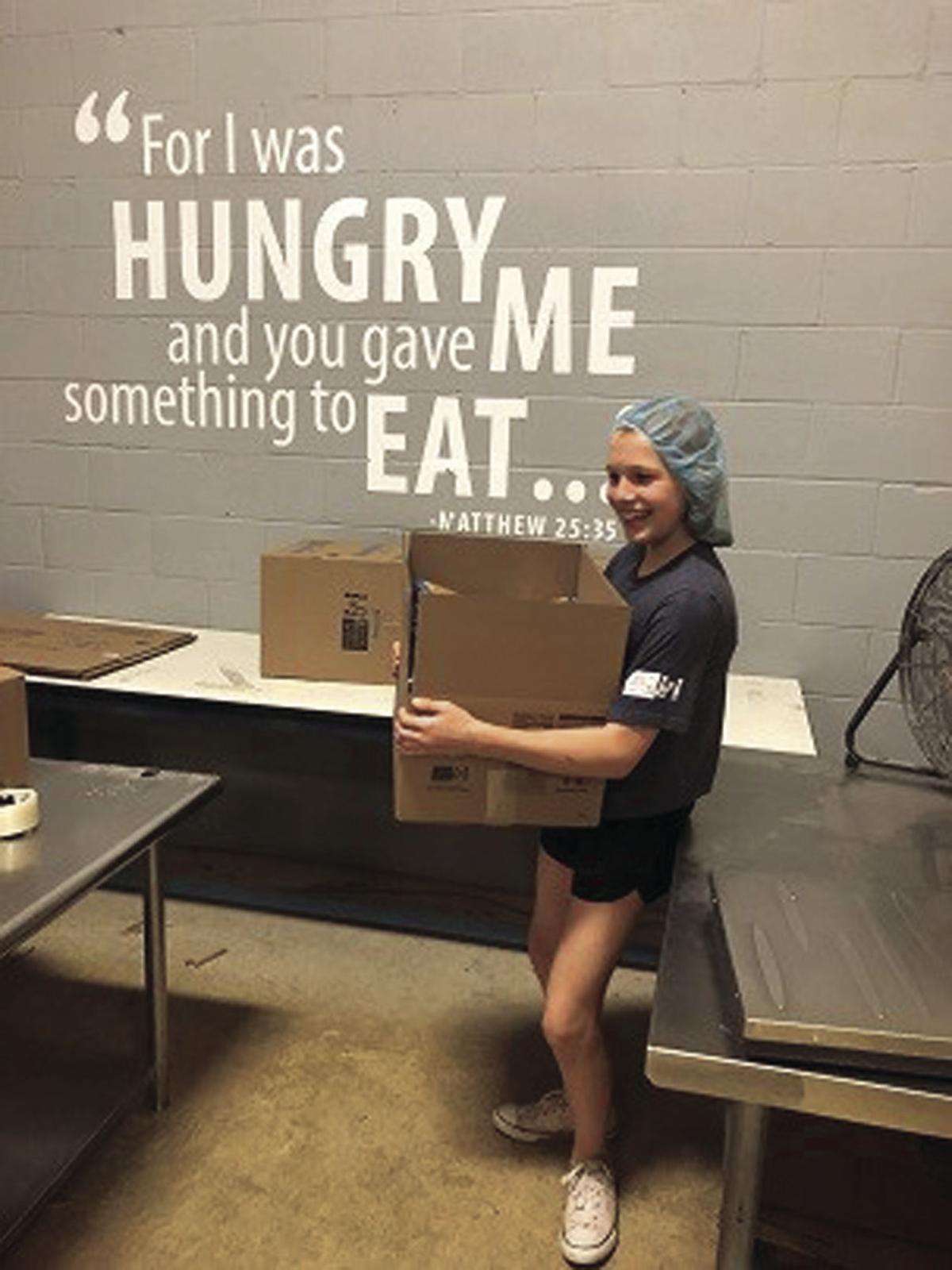 Aubrey Steel works the warehouse at the Coon Rapids Feed My Starving Children site. She has been going to the site regularly over the past 3-4 years and raising donations for FMSC. 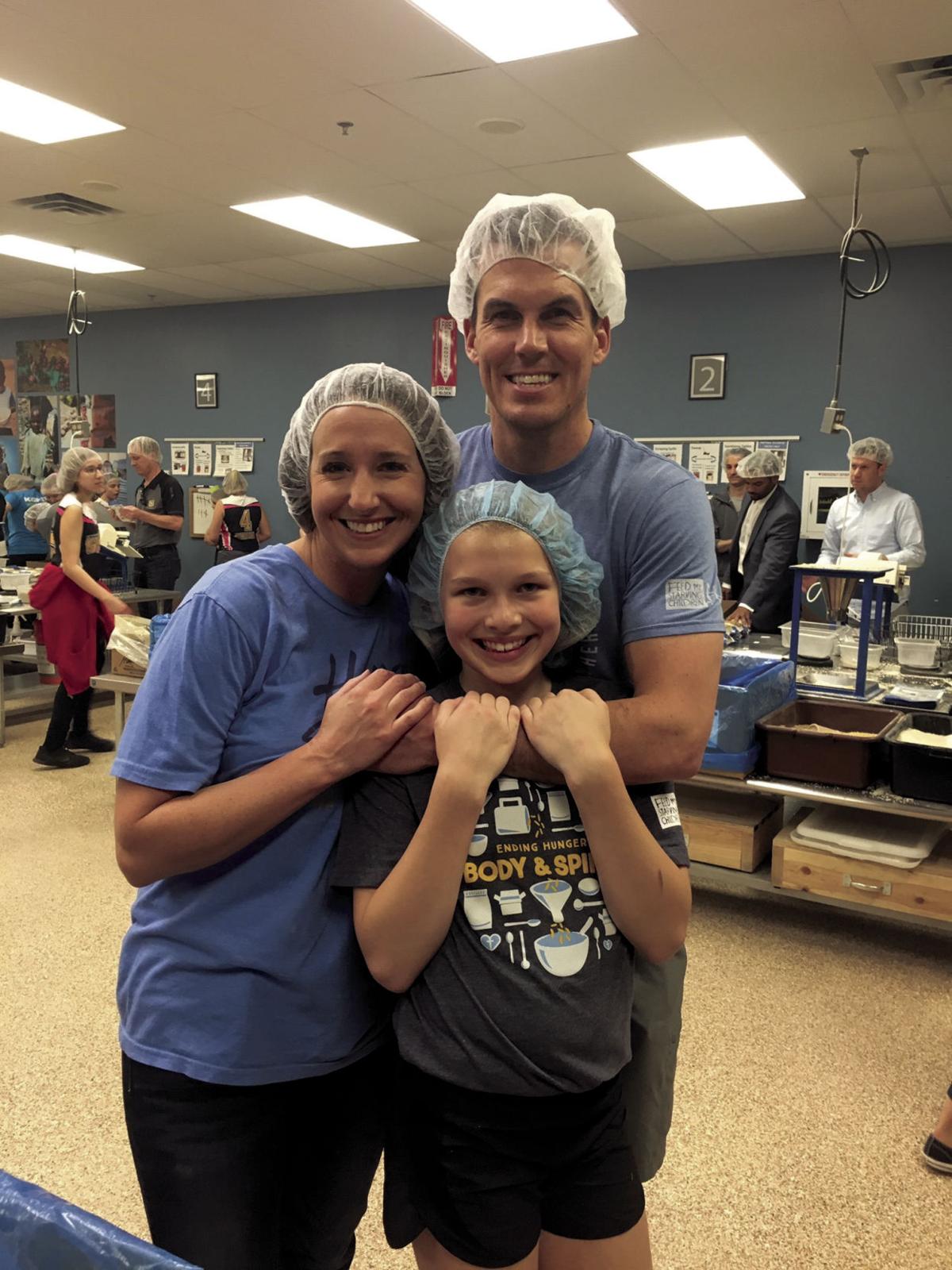 Bree, Aubrey and Dan Steel take some a break from packing at the Coon Rapids Feed My Starving Children location.

Aubrey Steel, center, is an 11-year-old from Maple Grove who has been recognized as an outstanding volunteer for Feed My Starving Children. She and three other volunteers are leading the way for the second annual Better Together event June 7 and 8 in St. Paul. Also pictured with Aubrey are Judy Watke, Development Manager at FMSC, and Nancy Breyen, Development Representative at FMSC packing at the Coon Rapids FMSC.

Dan, Aubrey and Bree Steel at the Feed My Starving Children Gala at the Minneapolis Convention Center.

Aubrey Steel works the warehouse at the Coon Rapids Feed My Starving Children site. She has been going to the site regularly over the past 3-4 years and raising donations for FMSC.

Bree, Aubrey and Dan Steel take some a break from packing at the Coon Rapids Feed My Starving Children location.

Many things are better together.

This will be very true at the Second Annual Better Together million-meal packing event and fundraiser this weekend.

And one Maple Grove girl’s passion to help others is sharing her story and urging other to participate in the event June 7 and 8 at the Minnesota State Fair Grandstand.

Aubrey Steel, an 11-year-old and fifth-grader from Maple Grove, was chosen by Feed My Starving Child staff as one of the group’s outstanding volunteers to be showcased at the Better Together event.

“Each person helps and gives in their own way,” said Andy Carr, vice president of development for FMSC. “For some it is gratitude for all they have been given. For others, giving and sharing is what they grew up with. Some have experienced pain and sorrow and, in their compassion, want to help those in similar circumstances.”

At age 8 Aubrey saw an ad on television about starving children. “I saw a boy with red hair, a bloated belly and he was super skinny on the arms,” she said. “He looked super sad and I asked my mom what was wrong. She said he was just really hungry and some people around the world don’t get to eat as much.”

She added that she thought about this for a while and then asked her mom, “Is there anything I can do to help those kids?” Her mom, Bree Steel, mentioned some organizations including FMSC. Aubrey told her mom she wanted to help the kids.

Dan Steel, Aubrey’s dad, said he and Bree were familiar with FMSC through work volunteer opportunities. “We both liked it and so that’s why we brought it up to Aubrey, and Aubrey loves it,” he said.

The Steel family volunteers at FMSC once a month and now neighbors join them, inspired by Aubrey’s compassion. Aubrey said her favorite area to volunteer is in the warehouse. “You bring the boxes back to pallet area,” she said. Dan Steel added, “There are workers that run up and down and make sure you have enough materials, and those are the warehouse workers.”

Aubrey added, “Then there are the box jockeys, which I like to do, and they go and lift up the 15 pound boxes and bring them back to the warehouse.”

Her younger brother Colton likes to work on the labels when the family goes to FMSC. “During my first year, my brother had a little piggy bank with $20 and he put it in a box and gave it to me for Christmas to donate to Feed My Starving Children,” Aubrey said. He has also helped her with the lemonades stands.

Bree Steel said the atmosphere at FMSC “is really fun.” She said there is music. “It’s fun being connected with the organization,” she added. “Everyone that we’ve meet has been so kind and so supportive of what Aubrey’s been doing.”

Aubrey Steel’s passion to help has only grown over the years. For the past several years, she has raised money by giving spa treatments, running a lemonade stand, selling stuffed animals and, most recently, babysitting.

“I babysit more now. When I did stands, I had some people give me $20 for a glass of lemonade even though it was only 50 cents, just because it’s for a good cause” Aubrey said. She added they made signs to let people know where the money was going to be donated. “People would stop by on a hot day and sometimes they would just give donations and not even want lemonade,” she said.

Others have become aware of what Aubrey Steel has been doing and have reached out to help her. Her relatives have given her donations to be used at FMSC.

“In one year I raised $500,” Aubrey said, with the help of family. “I try to donate every February or March.”

In total, Aubrey Steel has raised $2,200 for FMSC over the past 3-4 years. Dan Steel said that amount does not include the matching funds from his and Bree’s employer. “Our company matches up to $500 a year,” he added.

Donations are needed at FMSC besides people to pack meals. Dan Steel said the organization does not receive any government funding and the donations are needed to pay for the food and to distribute the food. “Aubrey is attacking it from both angles,” he said.

Aubrey and parents have been invited to the annual Feed My Starving Children Gala a few times. She has sold raffle tickets.

She said there is a shop at the Coon Rapids FMSC location where people can purchase shirts, which helps buy more food. “Wearing it around and having people ask about it, you can tell them how fun it is,” Aubrey Steel said.

Dan Steel added, “Feed My Starving Children gives people jobs to those in the communities the food goes to.” These people will create items to sell in the shops at FMSC locations.

Aubrey and her dad will be working again to sell bottled water at the Food Truck Festival in Anoka this summer. “It was so much fun,” she said of last year’s event.

Bree Steel said, “This Better Together and Feed My Starving Children is very contagious. You do it once and you’re hooked. It’s very fun and obviously very rewarding. I don’t think there has ever been a time where we tell the kids we’re going to pack and I don’t get excited cheers from them.”

Donations given to Aubrey for FMSC are great, but she wants more. “When people donate to me that’s good, but it’s just nice when they start what I’m doing and they do it themselves and then they tell other people,” she said. “Then they will feel good about themselves and they’ll know where the money goes. And they could go and pack meals. One meal costs 22 cents.”

When she gets into her high school and college years, Aubrey hopes to work at Feed My Starving Children. “When I’m around 15, I am going to on a mission trip when they distribute the food,” she said. “I really want to go to Haiti.”

The goal of Better Together is to raise awareness for the joys of helping and giving.

Funds will be split equally among the three nonprofits. Leadership from all three organizations will be present at the indoor event which is happening “rain or shine.”

A video introduction and instructions are provided ahead of the packing, which will be accompanied by music and celebrations of meal-pack totals. Individuals work together to measure, weigh and pack meals to be sent to starving children around the world. Volunteers can register online for two and a half hour shifts.

Volunteers are urged to sign up at fmsc.org/bettertogether. Friday’s event runs from 9 a.m. to 8:30 p.m., with four shifts available. Saturday offers three shifts between 8:30 a.m. and 6:30 p.m. The Grandstand is located at 1265 Snelling Avenue N. in St. Paul. Parking is free.