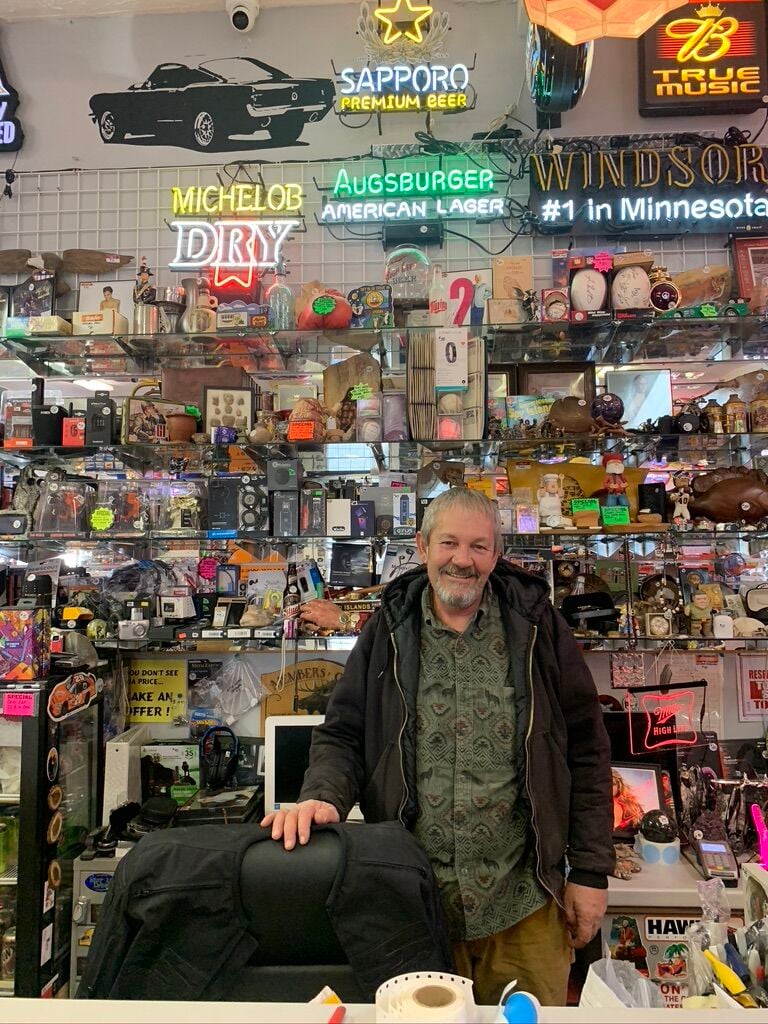 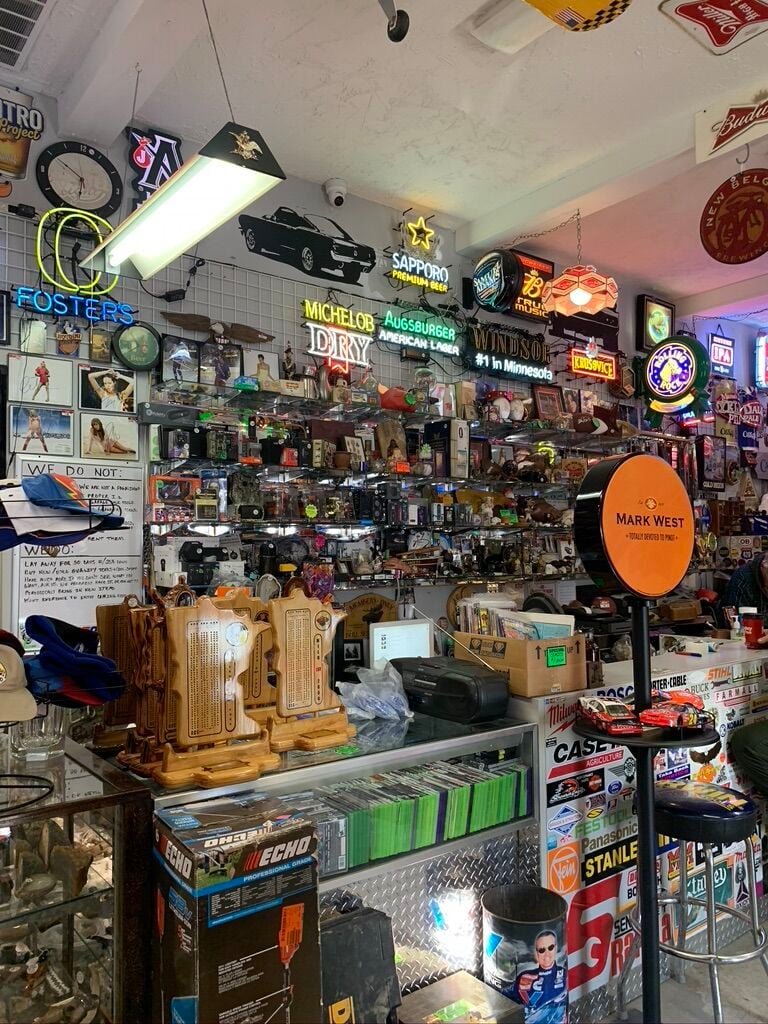 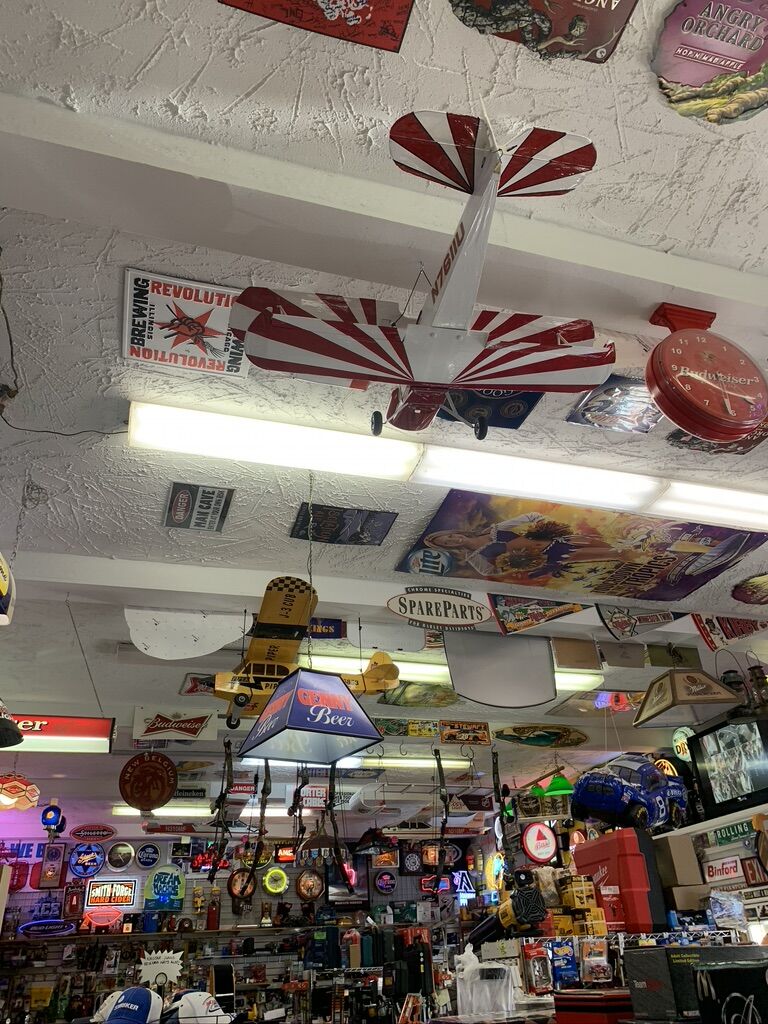 When I first visited Tools & Toys in Rockford, I was greeted by owner Bob Hegland with a fake, bloody, rubber hand. The prop was left a few years ago after Hegland and his partner-in-thrifting Harland allowed some guys from Hollywood to film their low-rent action movie, “3 Million Villains” in their pride and joy of a store.

Hegland pulled up the movie’s trailer on his computer, and the regulars and I watched, laughed, and made fun of the horrendous special effects together. And while cheesy laser pointers and fake blood are plenty entertaining, I couldn’t help but let my eyes wander around the loaded storefront.

Crash-tested airplanes and neon bar signs aplenty line the ceilings and walls, while knick knacks, toys, and, you guessed it, tools, fill the aisles and shelves within the unassuming shop. A stack of plastic-wrapped action figures sit in a box labeled “Star Wars Toys” right next to old-school Atari sets and Beanie Babies. Head to the other side of the shop, and you’ll find all the whozits and whatzits necessary for an at-home improvement project, right beneath a lit-up Marilyn Monroe.

Needless to say, I was surprised at the collection the guys had put together.

“The store started out just being about tools,” said Hegland. “But then, I thought that I would have to have other things to bring people in, and I started thinking.”

“A lot of the things you see in here are things I’ve been collecting for years,” he continued, pointing at the beer signs and autographed portraits affixed pretty much everywhere. “Some of my buddies came in after I first opened up the store, and they looked around and said, ‘Oh, so you just moved your garage down here!’”

Hegland opened up Tools & Toys seven years ago as a side gig to his construction work. But as time has gone on, the store has started to feel like less of a job, and more of a hobby.

What started as tools then became bar lights; then eventually fun playthings and other eccentric finds to fulfill the Rockford area’s knack for nostalgic goods.

“I wanted to have a lot of the things that were in stores when I was a kid,” said Hegland as I paged through the massive stack of Superman comics on the counter. “And ever since I opened the doors, I’ve always given the kids free stuff … I like it to be a fun place.”

A giant wall of Hot Wheels cars often grabs the attention of young shoppers, but don’t fret — Hegland has a polka dot box full of costume jewelry for those who’d rather spend their time getting dolled up as well.

Beyond the vintage and antique finds Hegland collects and sells, Tools & Toys also features tons of local products made by friends and veterans. Hand-carved wooden American flags, maple syrup, honey and cribbage boards in the shape of Minnesota only scratch the surface.

There aren’t many places you can buy a clump of megalodon teeth, Jimmy Buffett “It’s Five O’Clock Somewhere” sign and drill bits in one swoop, so expect to find different goods each time you step in the door.

Folks from the metro, up North, Wisconsin, and beyond make it a tradition to come and visit Tools & Toys, according to Hegland, and honestly, after going there myself, I can see why.

“It seems like once people get in here, they just keep on coming back.”