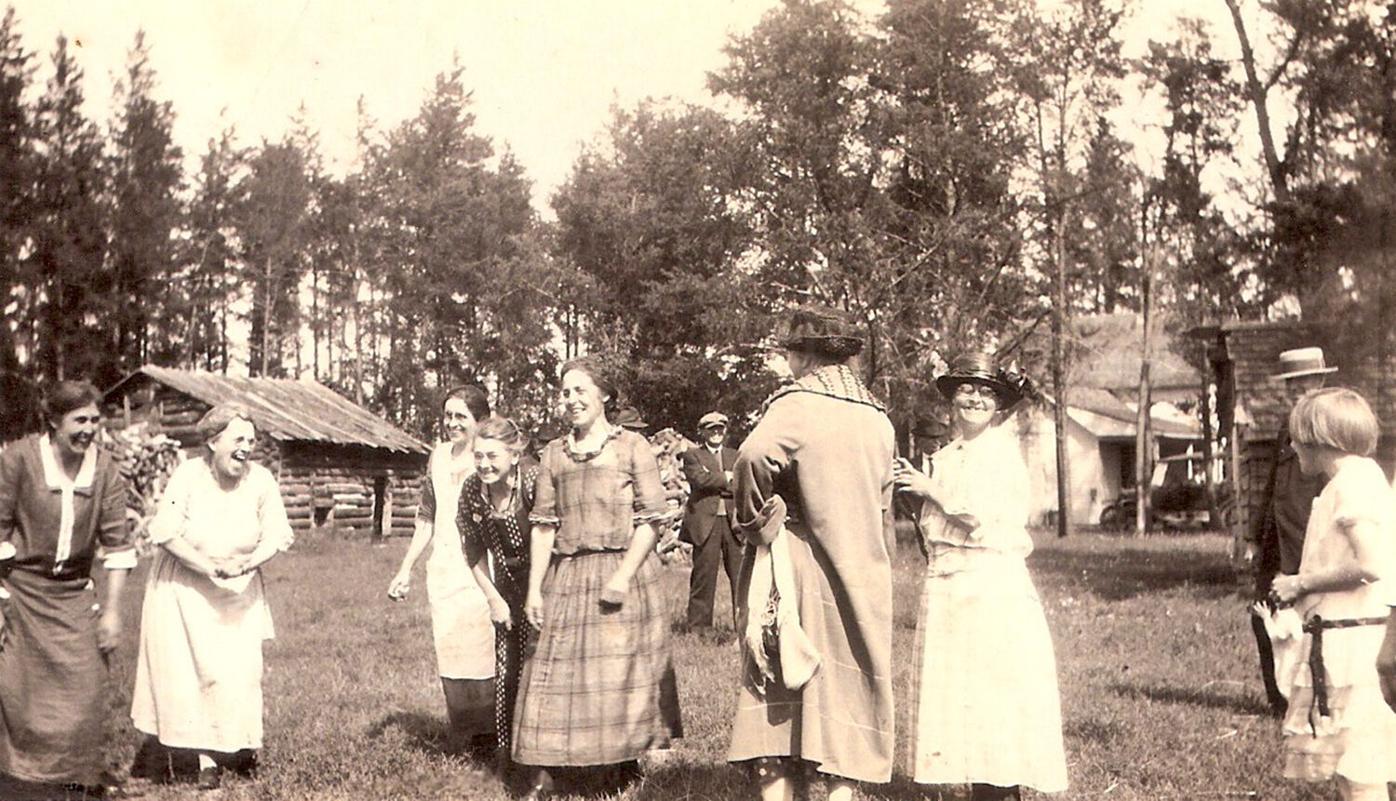 Several descendants of the Russell family gathered for the annual family reunion in 1925. 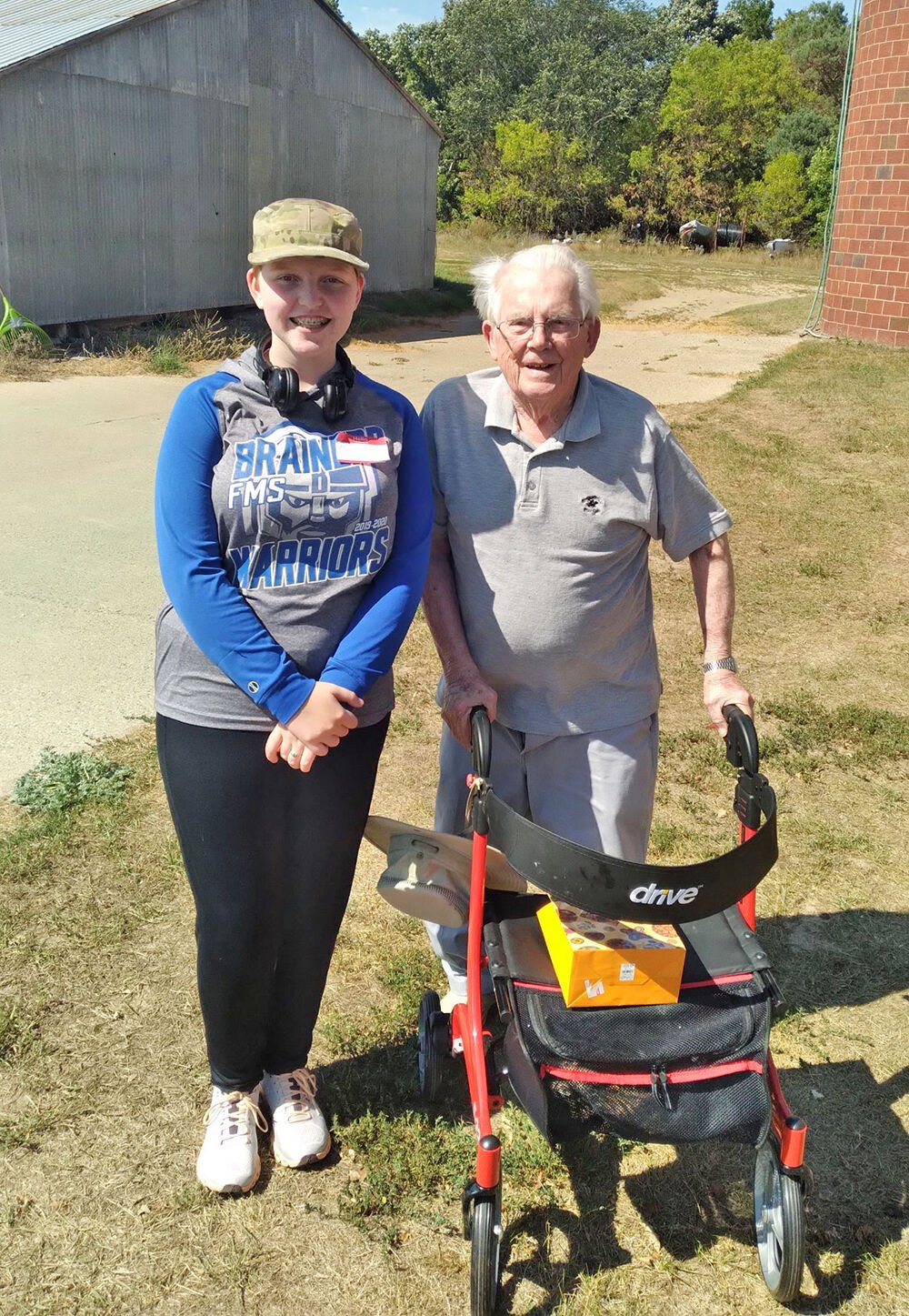 Nearly 40 descendants of Robert Russell attended the 100th annual family reunion in August, from the youngest, Micala Caughey, left, to the oldest, her great-uncle, Frank Caughey, 93.

This is the first article in a series of the Russell family’s life in Morrison County.

In August, the ancestors of Robert Russell, an immigrant from Glasgow, Scotland, gathered for the family’s 100th family reunion in Sartell. Not only to keep the connections alive, but also to keep the family’s history known through the generations, said Scott Graham of Wayzata.

Robert had seven children, many of whom immigrated to South Africa and America. His first son, also named Robert, worked as a carter in Scotland. Married to Agnes (Leitch) Russell, a desire to improve his condition to provide better for his growing family, Robert decided to immigrate to America. Since he was unable to raise sufficient money to pay for the passage for his wife and their three children, Robert Leitch, Jennie and Agnes, Robert left them in Glasgow, Scotland, until he was able to earn the required amount, Graham said.

According to the family’s history book, added on to from generation to generation, Robert brought the family Bible, a precious possession to the family, with him when he sailed to New York City, July 28, 1848. Once he had arrived on American soil, he continued his journey to Illinois, where his uncle, Stuart Russell, had made his home.

Robert left the family Bible with his uncle when he continued to Crow Wing County in Minnesota in search for employment. Although he intended to retrieve the Bible at a later date, the family history book reveals he was unable to.

However, after working hard, living frugally and saving money for three years, Robert finally had the means to send for his family. They arrived in Chicago, Ill. in 1851. Together once again, the family spent the winter near St. Louis, Mo. and then moved to Sauk Rapids. After their daughter, Janet, was born Sept. 5, 1852 — the first white child born in Benton County — they moved to a farm near the mouth of Little Rock Creek.

The family moved once again the following summer to what is now known as the town of Langola (now Langola Township). There, Robert purchased 160 acres of government land near Royalton. His brother, George Russell, later followed and homesteaded in Royalton.

Life was extremely hard for the family. Graham said that people may not always realize how difficult it was for many immigrants to settle in on the prairie, especially if they weren’t used to country life. The hardship Robert and his family faced when they moved to Minnesota is described in the family history book.

“Coming from a large city to this wild country; without money, with no practical knowledge of farming, unaccustomed to the extreme cold of the winter or the heat of the summer with its violent thunderstorms, with no neighbor within sight or hearing, awed by the howling of owls and the night song of the whip-poor-will, all new and strange to them...” said the family history book.

The fear of drunken Native Americans making their way to the home when Robert wasn’t home to defend them was a reality for his wife and children, as well. Altogether, it didn’t make a very happy home.

Graham said that there is no doubt that Robert’s wife, Agnes, struggled with settling in at first. She didn’t know how to bake bread and with no bakery within 100 miles, getting bread was a challenge. She also mourned the lack of oatmeal and the sea foods she was used to eating in Scotland. Since the local mills ground only wheat and corn, the fish market was only a memory, the family history book said.

Exchanging work with neighbors enabled the early settlers to utilize the gifts and skills of one another. Because of this, necessary buildings were erected, and farm animals, such as a hen and a cow, were purchased to set up a poultry yard or traded for in work. Eventually, the first school house in Benton County was built and Benton County School District No. 1 was organized.

“The difficulties of pioneer farming were all present. Crows destroyed the corn, skunks and weasels killed the chickens, bears carried off the young swine and for two successive seasons, Rocky Mountain locusts destroyed nearly the entire crop,” said the family history book.

Despite the difficulties the family faced, Robert remained active in local affairs. He was one of the original members of the school board and retained the position as long as he remained in the state.

Robert’s son, Robert Leitch, shared his experience of growing up in the family history book. As it was necessary to maintain the school for three months before school money could be drawn, a tuition of 10 cents a day was charged for each pupil.

“There were but 10 pupils and five were from our house so father stood for half of the expense of running the school and boarded the teacher half of the time,” Robert Leitch said.

As the school house burned to the ground later on, a semester of school was held in the Russell’s home until a new school house was built.

“Some of our teachers were very harsh. Preacher Adams used to throw his open pen knife at anyone he saw misbehaving and Albert Hodgdon would take a boy by the lobe of the ear and take off all the skin with his thumb nail,” Robert Leitch said in entry made in the family history book.

Being active in the community, Robert was later elected to the office of county commissioner for a term.

According to the family history book, Robert also assisted in the execution of a “half-breed” and two Native Americans who had murdered a peddler near Gull River in 1857.

Hunted by the Minneapolis sheriff, the murderers were overtaken on Rice’s prairie by several settlers and were then brought to Little Falls. After the prisoners had been given a hearty meal, they were then placed on a wagon that was driven under a pole that was situated between two trees. Once the ropes had been adjusted, the wagon was moved and the men were hung.

Over the years, Robert learned to speak Chippewa and was always on friendly terms with the local Native Americans who, including Chief Hole in the Day, a prominent chief of the Ojibwe, visited the family often.

“Hole in the Day often came and on one occasion bemoaning the loss of his pony, which had mysteriously disappeared. Father volunteered to assist him and the pony was found hidden in the stable of one of neighbors. The golden rule did not govern the greater part of the dealings of the whites with the Indians,” Robert Leitch said in the family history book.

Later, the family lost their land.

“Father had bought squatter’s right from Pony Lamb, giving $25 for his claim. The improvements consisted of 12 acres under cultivation and a shed-roofed log cabin which leaked so badly that the girls used to take refuge under the table when it rained. Father had but 50 cents when this transaction was completed and with his capital he started farming. The land was purchased from the government at the established price of $1.25 per acre in cash, which father borrowed, giving a mortgage on the land as security. This loan was later increased to $300 when we were defrauded in the sale of our first crop and we were never able to pay it and eventually lost the land under the mortgage,” Robert Leitch explained in the family history book.

Growing weary of the small returns of a farmer and intrigued by the stories of big strikes in the new mining district near Pike’s Peak, Robert left the family to try his luck as a miner in May 1860. At first, he went to Omaha, Neb. and then continued on to Mountain City, Colo. where he worked as a miner for a while and then moved on to Nevada, Colo.

With a partner and at a cost of $725 each, Robert developed a claim and sank a shaft to the depth of 88 feet. Despite their endeavor, he had to do other work to get the funds to develop their mining project further.

On July 28, 1862, Robert was caught in cave-in which was caused by defective timbering. He died from the injuries he had sustained in the cave-in five hours after he had been rescued.

At his request, Robert was buried with Masonic honors by the Gregory Mines lodge of which Robert was a member. The lodge’s master later wrote the family and described the funeral as the largest ever seen in the mountains, as befitted a loved and respected brother.

The family history book described Robert as an honest man, who loved his family dearly. His letters back home were full of admonitions of their children and his great hope that they would acquire a good education.

After Robert died, nothing was realized from the estate and the family was left in poverty. He and Agnes had eight children, Robert, Jennie, Agnes, Janet, William, Marion, Rosella and John, who had been born after Robert had departed to Colorado and was not yet two years old. Their mother, Agnes, was also in poor health, at the time.

The family history book said about Agnes, “All honor is due to the brave woman who faced the horror of the situation rather than return to the native land for which her heart longed. ‘The children will be better here,’ she said, and for them she endured.”

The earnings of the different members of the family were turned over to the mother, who with proverbial Scotch thrift, managed the affairs and kept the family together until the older members married. Later, Agnes mainly lived with her son, Robert Leitch, until her death in 1877.

Looking back at the first and second generation of the Russell family immigrating to America, Graham said there is so much family history and stories of what life as like that have been documented. Each generation has added something.

Given the fact that many people don’t know much about their ancestors, Graham said he and the rest of the family are very thankful for whoever started the tradition of documenting each generation.

The annual family reunions began in 1920. Because of COVID, one was not held last year, Graham said. However, this year, the held the 100th reunion.

“It’s amazing when you really think about it,” he said.

Graham said the number of relatives who are able to make it to the reunion varies from year to year. This year, they had 38 relatives, with 13-year-old Micala Caughey as the youngest of those attending and her 93-year-old great-uncle, Frank Caughey, as the oldest.

While several of those who attended the 100th family reunion were from various cities in Minnesota, such as Albert Lea, St. Cloud and Brainerd, others came from out-of-state, including from Arizona and Montana.

“We all share this common story, even though we’re down six generations that tie us together,” Graham said.