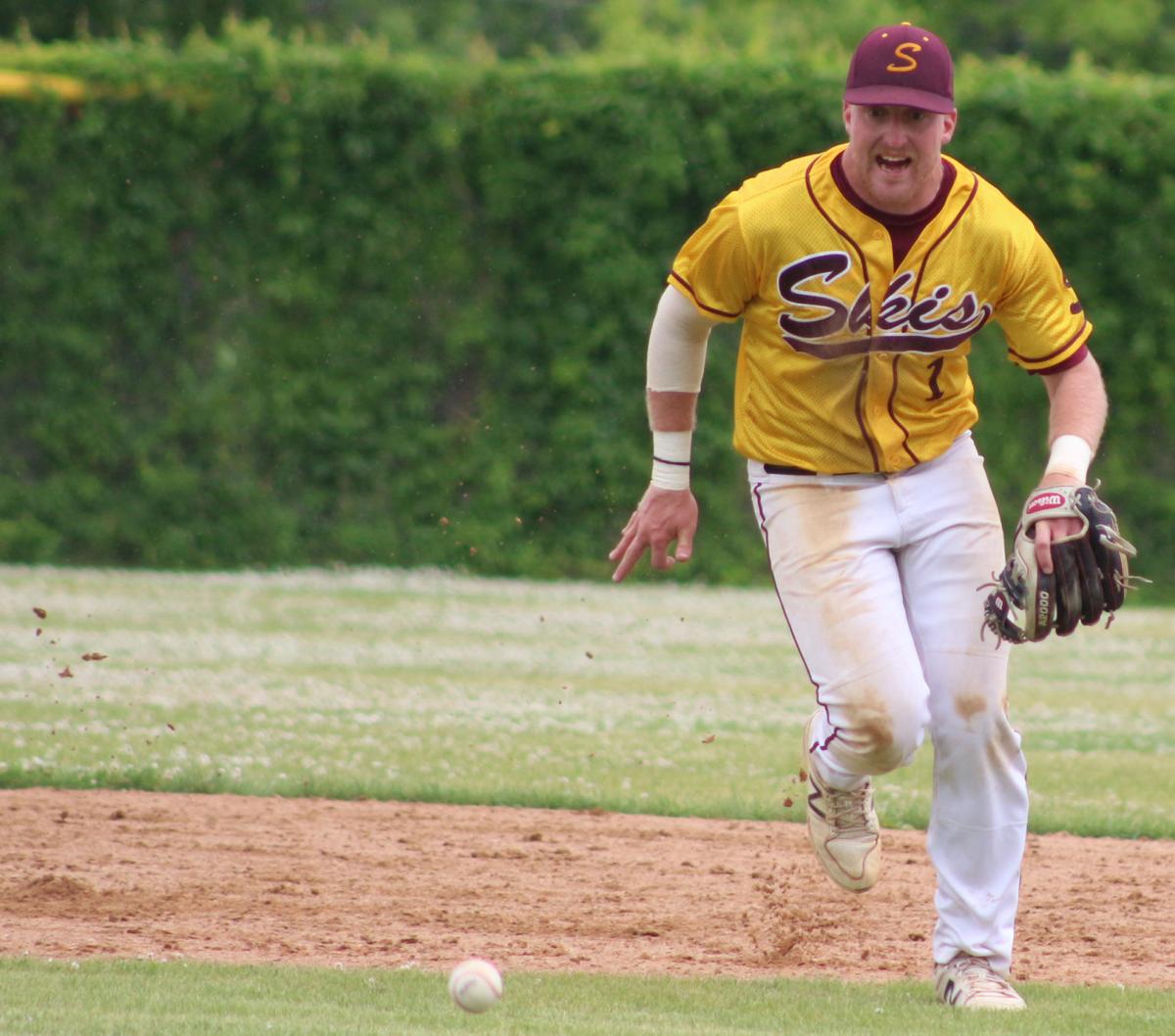 Sobieski shortshop Collin Eckman charges in to grab a soft ground ball up the middle in the Victory League opener against Upsala, Saturday, June 20 in Sobieski. 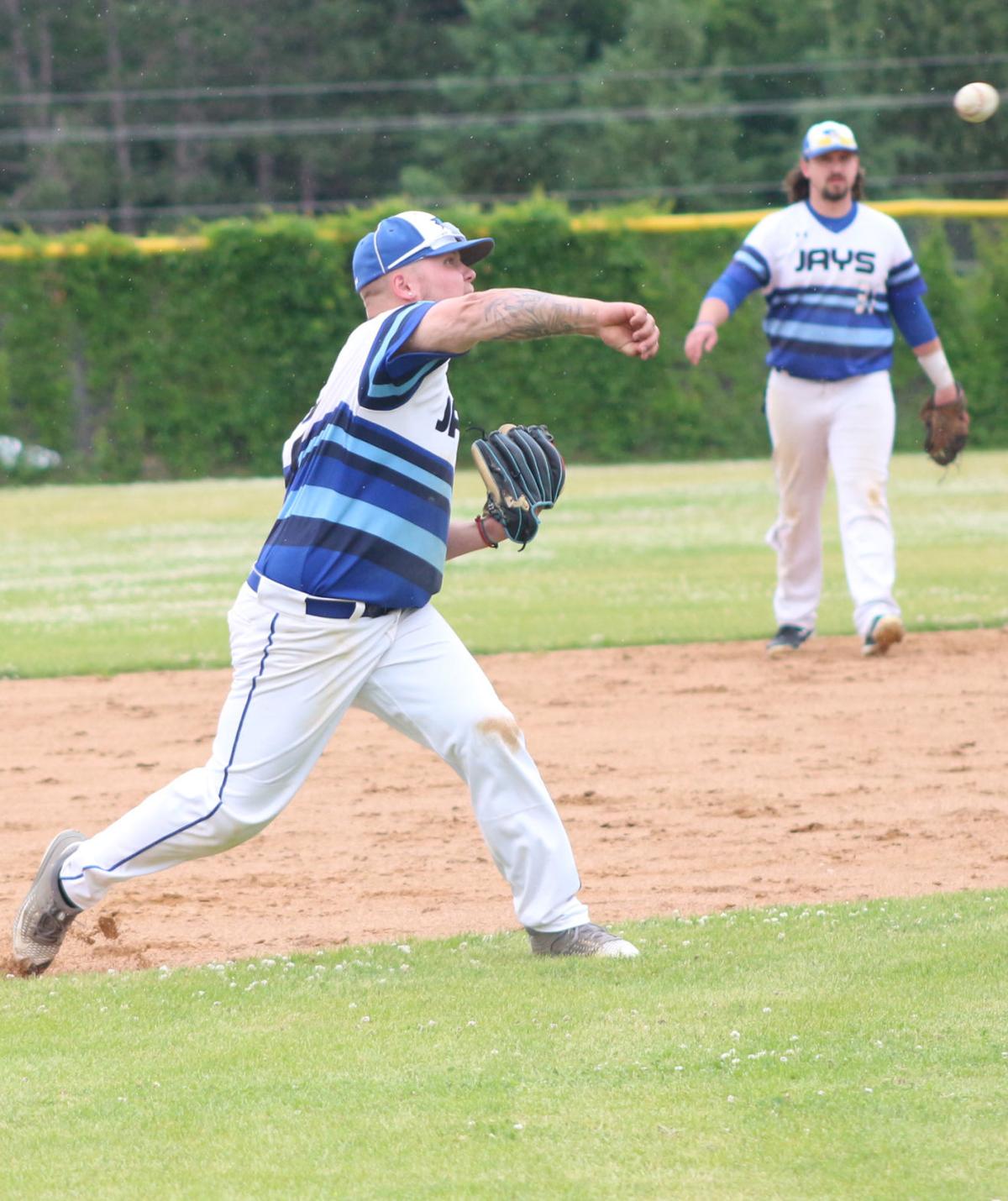 Upsala third baseman Myron Ripplinger fires over to first base to record an out.

Sobieski shortshop Collin Eckman charges in to grab a soft ground ball up the middle in the Victory League opener against Upsala, Saturday, June 20 in Sobieski.

Upsala third baseman Myron Ripplinger fires over to first base to record an out.

Sobieski put four over the outfield wall, including two from Scott Litchy in the first three innings helping to earn a 16 - 4 win in seven innings over the Upsala Blue Jays Sunday, June 21.

The game was the first in Victory League play for either team. Sobieski lost a pair of non - conference games against Class B opponents Moorhead (6 - 0) and East Grand Forks (3 - 2) Saturday, June 20.

Litchy smashed a two - run bomb in the first to get things going for the Skis. Colin Eckman homered to drive in two more in the second, and Litchy went yard again in the third to put Sobieski up 8 - 0.

The Skis’ biggest home run came in the eight - run bottom of the fifth, when Jake Kapphahn went to the opposite field for a three - run home run.

Dusty Parker went 3-for- 4 for the Skis, and Matt Baier and Riley Hirsch each had a pair of hits.

Upsala did manage to knock in four runs in the sixth inning. BJ Lange drove in a run with a single, and Levi Lampert delivered a two-run single as well for the Jays.

In other Victory League action:

A walk off single by Austin Gohl pushed the Pierz Bulldogs past the Pierz Lakers, Friday, June 19, in the first league contest in the Victory League.

Austin Dickmann earned the win for the Bulldogs after pitching three strong innings of relief, allowing only one hit and striking out five.

Brandon Dickmann and Michael Leidenfrost each had a pair of hits and an RBI in the win.

Luke Girtz drove in three run on two hits for the Lakers in the loss.

Ft. Ripley grounded into five double plays as the Rebels were knocked off, 2 - 1, by St. Mathias, Sunday, June 21. It was the season opener for Ft. Ripley.

The offense was led by Bryce Flannagan and Zach Heidmann who each had a hit and a walk for Ft. Ripley.

The Victory League West Division season began with a bang for the Randall Cubs, who went to Swanville and smashed the Swans 13 - 1 in seven innings, Saturday, June 20.

Travis Wenzel, Caleb Strack, Brett Strack and Sam Nagel combined to allow only one hit in the win.

Wenzel, a new member of the Cubs, and Nagel each hit dingers in the opening inning. Rick Drew was 3-for -3 with two walks, two runs and two RBIs.

Swanville’s lone run was manufactured by a walk, steal and run by Jordan Sales.

The Buckman Billygoats came from behind to defeat the Pierz Brewers, 4 - 3, in the Victory League opener in East Division for both teams, Saturday, June 20.

Noah Boser smashed a double, a single and drove in three runs to lead the Buckman offense.

The Brewers scored all three of the runs in the first inning. Peter Schommer had the lone Brewers RBI, and also pitched four scoreless innings of relief.

The remainder of the East Division games were wins by the Pierz Bulldogs and Buckman Billygoats.

Both teams improved to 2 - 0, while the Lakers dropped to 0 - 2, and the Riverdogs lost their season opener.

Joseph Strauch pitched six strong innings for the Bulldogs in the win.

Brandon Dickmann had a hit and an RBI to pace the Bulldog offense.

Ethan Walcheski and Ryan Snyder had RBI singles for Royalton.

Noah Boser smashed a homer, a double and drove in three runs in the Buckman win over the Lakers.

Preston Rocheleau hit a pair of doubles in the losing effort for the Lakers.

The Swanville Swans dropped to 0 - 2, while Flensburg won their season opener in Swanville, Sunday, June 21.

Matt Stumpf, Luke Thoma and Dylan Lukasavitz all hit bombs for Flensburg in the win.

Swanville was led by Jordan Sales and Peyton Jackson, who each had a pair of hits.