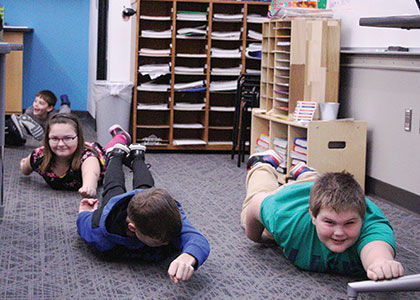 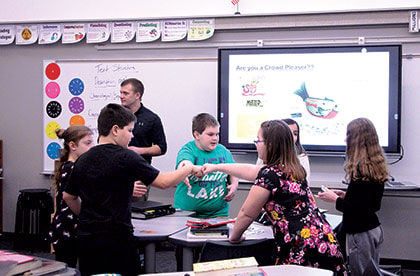 Students played “Happy Salmon” a card game where players get a number of cards that assign an action which they have to match and do with another player to move onto the next card. This game was for the crowd pleaser section of the flow unit. Pictured are (from left): Gracie Kimman, Carter Stich, Schmidtbauer, Max Willman, Haylee Gohl, Maddison Karsjens and Kloe Przybilla.

“What are your skills?” “Do you work better in a group or on your own?” “How do you show love?” “What kind of personality do you have?” “How do you take what you know about yourself and apply that to a career?”

Could anyone answer these questions when they were 12?

The students at Pierz Public Schools are learning how to answer all of those questions and more. A program spearheaded by two high school teachers in Pillager, called Metier, is helping kids learn how to choose a future where they will thrive in all aspects of success and happiness. It may seem like a tall order, but Metier teachers in Pierz say the program is one of a kind.

The creators of Metier, Kevin Votaw and Jordan Herman, state a clear purpose for their program in the Metier introduction video — “Metier’s goal is to find the truest, happiness and greatest versions of yourself by finding how you play, flow and love.”

The pair started Metier after brainstorming ways to motivate kids. The program saw such success that Sourcewell recruited them to present on the program throughout the state. Votaw and Herman both work directly with Pierz Metier teachers to implement the program.

“Imagine if your job is like playing. Every child plays, and really as an adult you’re just a bigger version of yourself when you were a kid. You have responsibilities, you have roles you take care of, but imagine going to your job and you just love what you do. You love your life. That’s sort of what Metier means. It’s finding your metier, what do you want to do? What’s your calling? Everyone has their path, everyone has their role, it’s finding what you like to do and it’s sort of like the life that you love and it loves you back,” said fifth grade Metier teacher Aaron Schmidtbauer.

Metier is a French term roughly describing a profession that a person has great skill in and is suited to.

The Metier program, which is taught from fifth to eighth grade, takes those early childhood ideas of playing and applies them to adulthood and careers. Students in the fifth grade learn their skills, the environment they work best in, called a flow, and how they love. Then in the sixth grade they’re able to focus on what type of person they are, while still covering work-flows and their love language.

“So they start the year not knowing anything about this. It’s a completely different class they’ve never had a class about themselves, so it’s sort of awkward, it’s sort of like you’re pulling teeth a little, just for them to understand and talk about themselves and interests each day,” Schmidtbauer said.

Steve Holbrook, the sixth grade Metier teacher with 30 years under his belt, said mere minutes into the presentation on this program, he was on board.

“Hopefully by the time they hit ninth grade, they’ll know what they’re going to do. Because they’ll start in fifth grade and they start learning the multiple intelligences and who they are. And then in sixth grade we talk about these play personalities, and what do you like to do. When you’re older, you don’t change that much, your interests, the way you play, the way you do things it doesn’t change that much,” Holbrook said. Both Holbrook and Schmidtbauer are in their second year teaching Metier, so this year’s sixth graders will be the first class to go through the entire program from fifth to eighth grade.

Many students get to their junior or senior year and panic about their future, Schmidtbauer said. He said that they are replacing the mentality of people picking their job with what job would pick people based on their fit.

Nodding in agreement, Holbrook said, “Now you know yourself, now you know who you are so therefore instead of going and looking for the job, the job has to fit you. You just want to be happy with life.”

Each student is given a journal depending on what grade they’re in, to track what they’ve learned about themselves.

In the fifth grade, Schmidtbauer said they start with the multiple intelligences: body, verbal, people, self, picture, number, nature and music “smart.” He said the term smart is used loosely because a student could be number smart but maybe not as highly ranked in nature smart, but it doesn’t mean they aren’t smart, they just don’t have as many skills in that area as another.

“The word smart just means who has got that gift,” Holbrook said.

The first half of the school year is focused on these “smarts” he said. So students learn what each intelligence is and learn and play to decide if they thrive in that area. They can rank themselves one to five in their journal, and either way, Schmidtbauer said it’s a celebration because a student is closer to finding what they are good at.

For example, if a student communicates well verbally, enjoys reading or writing and also has skills in that area, they may score themselves high in verbal smart. After reflection and discussion about what they do in their life that supports the idea that they’re verbal smart, students document their findings and consider the career fields related to that.

If they aren’t verbal smart, they document why they scored lower in that area and can reflect on what jobs may not be best for them. This process applies to all eight intelligences.

Holbrook and Schmidtbauer said both the fifth and sixth grade classes start with a mental breathing activity, then they move on to their quest which is that day’s lesson plan, then they include a social and physical aspect as well.

“So it could be, well today we’re going to learn about body smart, that’s our quest. There’s a social time so we’re actually doing something it could be discussion or it could be game based and there’s always a physical time too,” Schmidtbauer said.

Both teachers incorporate a “jar of awesome” into their classroom settings. Which is a jar full of slips listing something that the students thought was awesome, either that day, that week or something that happened at home.

Games are often used in Metier classes as an activity involving the subject of study. Schmidtbauer said it is not a game-playing class, but the games can help students understand what they like and what they are good at. They can apply the skills used in the game to other life activities and look for overlap.

“They’re finally reflecting and they’re really making themselves think about their own lives so then on reflection day, where am I on the scale? It’s OK to be not smart in a certain realm because you’re going to find two, three maybe four, five areas that you are smart in,” he said.

The second half of the year, fifth graders focus on their flows and love languages, which are topics both studied daily in sixth grade, Holbrook said.

“So basically flow is how you focus best, but if you’re doing something, what’s going to motivate you and lock you in the whole time to complete something?” Schmidtbauer said.

Crowd pleasers work better in a group, while a deep thinker focuses best on their own and a hard charger may need a competition or deadlines to be successful. Flow-goers are hard to describe, said both teachers, but essentially they work best in whatever environment is presented, they go with the flow.

Once a student knows their top two intelligences and their flows, Schmidtbauer said it’s easier to look at possible career fields they will excel in.

Holbrook said when he first presented love languages, students giggled, but after understanding they often talk openly about how they communicate love whether it be with time, actions, words, touch or gifts.

So, in fifth grade students are introduced to this concept, but in sixth grade, Holbrook said they talk about love languages and flow every day. The new concept in sixth grade is focusing on the eight personality types: joker, kinesthete, explorer, competitor, director, collector, creator and storyteller.

Holbrook said a student survey reported that 97% of students love the Metier classes because they’re learning about themselves.

Loch said they have a “hear it, do it, see it” way of approaching the career fields. First they learn key aspects of the career field, if they have the traits needed in that field and if they enjoy it. Next they hear from speakers in that industry and then they can do activities relating to several job types in that career field. Students also take field trips to see people working in those fields.

The system with journaling, reflecting and ranking is the same for the seventh grade as with previous grades. Loch said by the time a student hits ninth grade, they can start choosing classes and have the opportunity to choose classes pertaining to their career field interests.