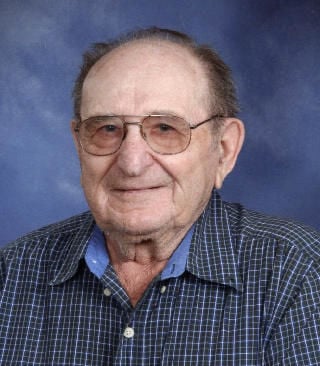 Robert “Bob” Ficek, 97-year-old resident of Pierz, MN, passed away Saturday, October 5, 2019, at the Harmony House in Pierz, MN. A Mass of Christian Burial will take place at 11 a.m. on Thursday, October 10, 2019 at St. Joseph’s Catholic Church in Pierz, MN with Father Kenneth Popp officiating. Burial will take place in St. Joseph’s Parish Cemetery in Pierz, MN. A visitation will be held from 9-11 a.m. on Thursday at St. Joseph’s Catholic Church in Pierz, MN. Funeral arrangements are with the Shelley Funeral Chapel in Pierz, MN. Bob Ficek was born on June 8, 1922 on the homestead in New Hradec, ND, to the late James and Anne (Kostelecky) Ficek. He attended the local rural Catholic community school. Bob was united in marriage to Dorothy Fugere on May 10, 1943. He worked for several area ranchers and then moved to Dickinson, ND, where he was employed as a cement truck driver. His dreams of owning his own farm came true in 1962, when he and Dorothy moved their family to a dairy farm west of Buckman, MN. There they raised their seven children with strong faith, values, and work ethic. Along with farming, Bob was also employed as a bus driver for the Pierz School District for many years. After he retired from farming, Bob and Dorothy moved to Pierz, MN. He continued to work as the custodian for St. Michael’s Catholic School and Parish in Buckman until he retired. Bob was an excellent mechanic and could fix almost anything. He would take many car rides to enjoy the farmland around the Buckman and Pierz area. He also loved his garden and took pride in his vegetables, flowers and yard. We will remember Dad for his passion for ranching and love of horses. He would ride the prairie for hours on end and shared many stories of these adventures. Farming and raising cattle was fun for him, not work. He was also known as quite the prankster and would tease teachers, nursing staff, and grandchildren on end. Bob loved traveling, fishing, and cheering on his grandchildren as they were dirt track racing. Finally, his love for his family will forever remain in our hearts. Left to cherish his memory are his children, Larry (Gayle) Ficek of Pierz, Sandy (Jim) Poser of Coon Rapids, Darrol (Judi) Ficek of Fort Ripley, Allan (Peggy) Ficek of Sobieski, Cheryl (Jack) Smith of New Hope and Jolene (Bob) Loidolt of Pierz; grandchildren, Kim Ficek, Larry (Mindy) Ficek, Brenda (Mike) Lockman, Brian (Molly) Poser, Brad (Jessica) Poser, Jordan Ficek, Nathan Ficek, Andrew Stein, Cory (Jennie) Loidolt, Kelly (Steve) Wesner and Rebecca (Cody) Przybilla. He was also blessed with 12 great-grandchildren. Bob is also survived by sister, Agnes Ehli; brother, Edwin (Judy) Ficek and sister-in-law, Margie Ficek. Bob was preceded in death by his parents; wife of 69 years, Dorothy; son, Timothy and daughter-in-law, Gail Ficek; brother, Laudie; sisters, Lillian, Eleanor and Dorothy. In lieu of flowers, memorials are preferred to the Harmony House of Pierz or Harmony House Hospice.