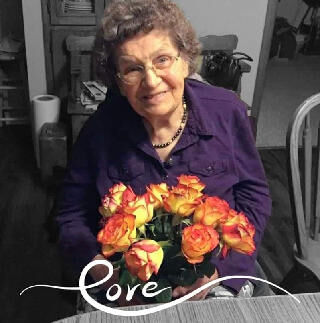 Mary V. Brezinka, 88-year-old resident of Royalton, MN, passed away on Monday, April 5, 2021 at St. Otto’s Care Center in Little Falls, MN. A Mass of Christian Burial will be held at 11 a.m. on Friday, April 9, 2021 at Holy Trinity Catholic Church in Royalton, with Fr. Laurn Virnig officiating and Fr. Roger Klassen con-celebrating. Burial will be at Holy Trinity’s parish cemetery. Visitation will be from 5 to 8 p.m. on Thursday at Shelley Funeral Chapel in Little Falls and from 10 to 11 a.m. Friday at the church. Mary Kruzel was born on November 10, 1932 in Swan River Township near Sobieski, MN, to the late Joseph and Agnes (Prokott) Kruzel. She was united in marriage to Leo Brezinka on April 21, 1953 at St. Stanislaus Catholic Church in Sobieski. The couple settled down and farmed north of Royalton for the next 59 years until Leo’s passing in 2012. Mary worked alongside her husband on the farm, milking and harvesting the corn, as well as raising her 10 children. She also grew strawberries and raspberries that she sold, and worked nights at Pete and Joy’s Bakery, for extra money. In her spare time, Mary enjoyed quilting and embroidering, and was a 4H leader, teaching her children as well as others, many skills and the rewards of hard work. She was an active member of her church, Holy Trinity, teaching religion and First Communion classes, and participating in their Christian Mother’s, Choir and Study Groups. She enjoyed family gatherings and visiting with friends, often playing (and winning) cards. Mary is survived by her sons, Michael (Linda) of Buckman, MN, William of Royalton, Leonard (Barb) of Fifty Lakes, MN, Edward (Joanne) of Pierz, MN, John (Felicia) of Clearwater, MN, and Jerome (Heidi) Brezinka of Maple Lake, MN; daughters, Ellen (Virgil) Blaszak of Hillman, MN, Helen (Rod) Schwinghammer of St. Cloud, MN, Rose (Kevin) Kowitz of Sauk Rapids, MN, and Carrie (Darin) Petron of Royalton; brother, Anthony Kruzel of Little Falls; 39 grandchildren and 57 great-grandchildren. Mary was preceded in death by her parents, Joseph and Agnes Kruzel; husband, Leo Brezinka; and brothers, Sylvester, Joseph, Frank, Danny, and John Kruzel.