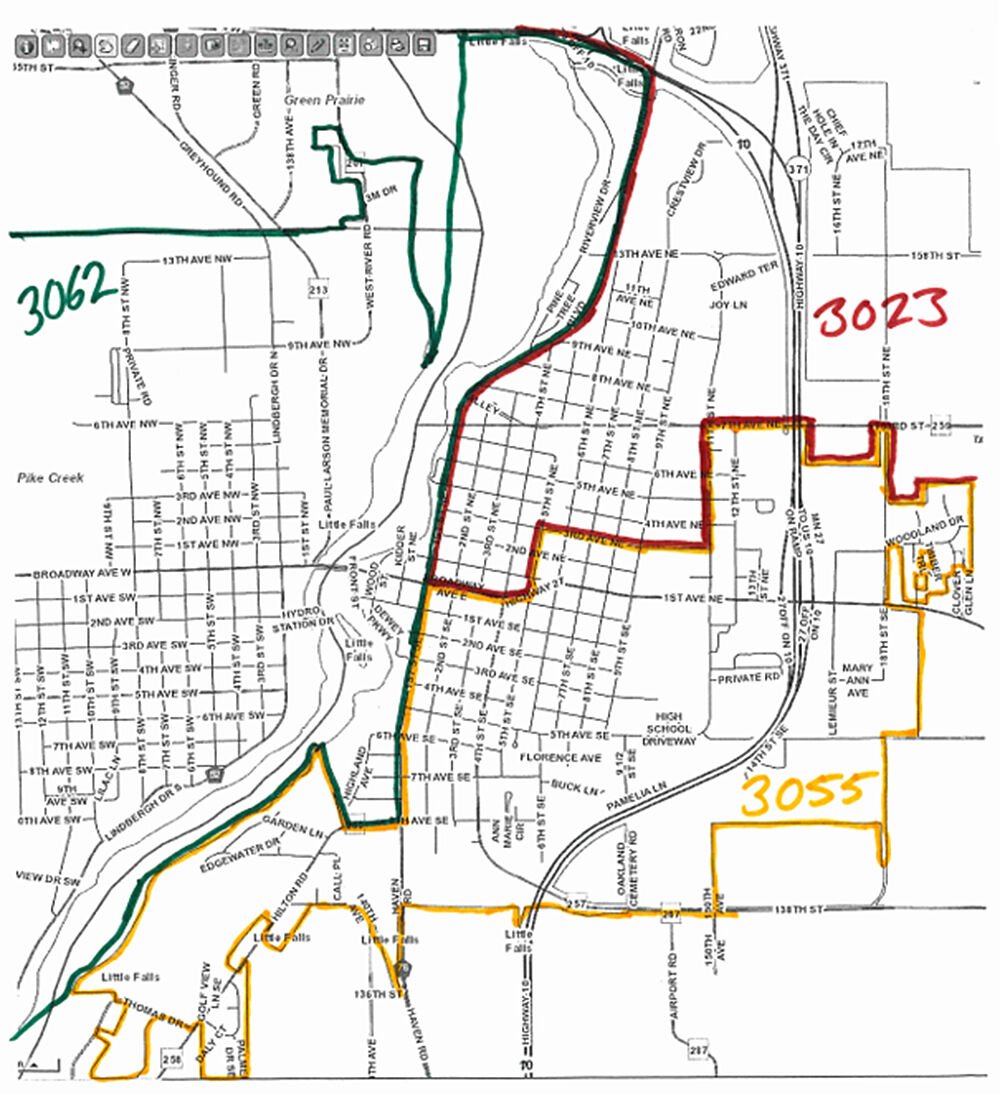 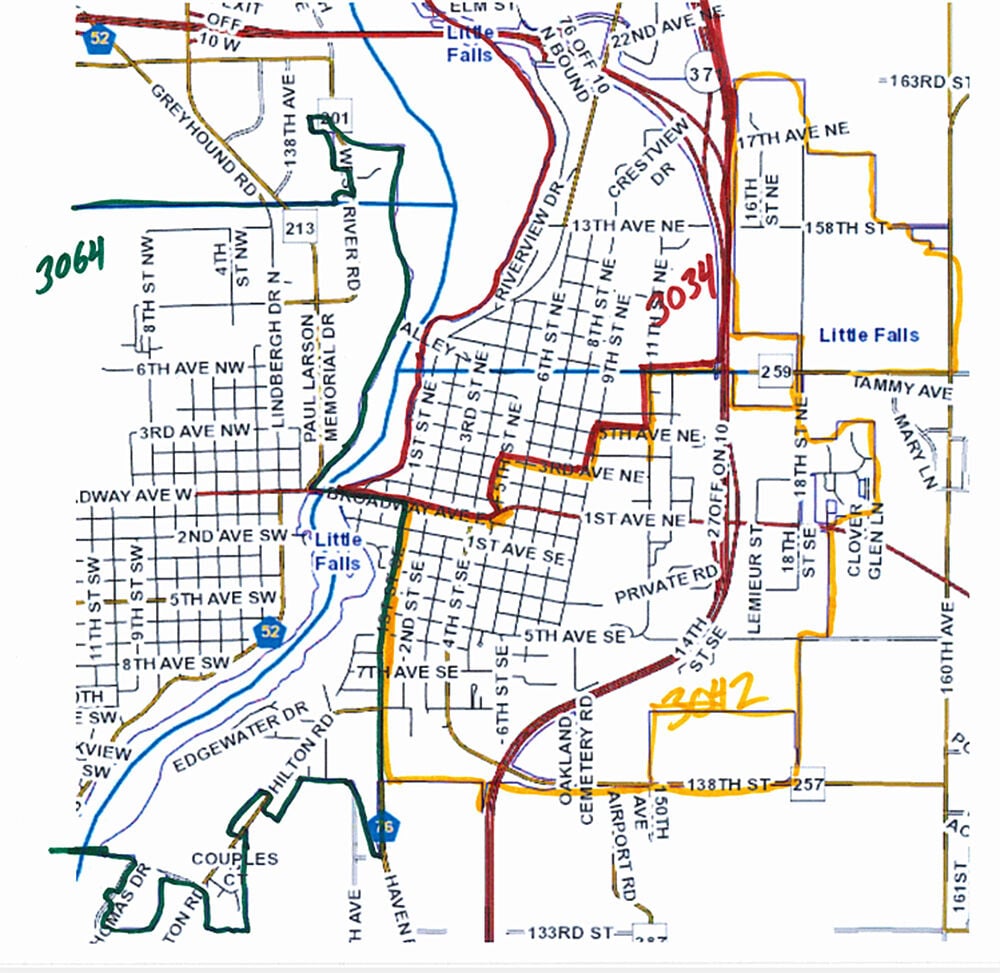 The Little Falls City Council discussed, Monday, the next step in changing the city’s council ward boundaries ahead of the 2022 election.

Redistricting is necessary due to the fact there is a large disparity in the population of the three current wards. At a Sept. 27 special meeting, the Council decided the best course of action, given the time constraints to set new boundaries, was to change the wards by ordinance before next year’s election. It then can consider long-term options ahead of the 2024 election.

City Administrator Jon Radermacher said it is recommended by both the Minnesota Secretary of State and the League of Minnesota Cities to seek public input prior to finalizing redistricting plans. Monday, he asked the Council for input on how to best move forward with public engagement.

He said some options included holding informational sessions, as well as posting the possible new configurations on both the city’s website and Facebook page.

“That would be important, because we still do need to have the ordinance approved and meet the March 29 (2022) deadline in order to finalize our redistricted lines,” Radermacher said.

Based on both the city’s charter and requirements from the state, the city is under no obligation to hold a public hearing on the ordinance change. Council member Raquel Lundberg asked, even though it is not a requirement, if that would be one way to engage with the public.

Radermacher said that could be a part of it. However, he felt holding a public hearing or informational session would only meet the “base level threshold” of public engagement.

“I think, in terms of what we talked about (Sept. 27) in trying to align our perpendicular line to a highway or east/west line, Fourth Avenue seemed like a pretty feasible area,” Radermacher said. “... the block groups aren’t such that it’s easy to just draw the line and get the numbers. We have to kind of maneuver things a little bit on the east end of town to make everything fit.”

If public informational sessions are scheduled, they will be advertised as a time in which residents can come to learn more about the proposed changes. City staff and council members would be available to hear input or answer any questions.

“I still would like to make sure, as we share proposed information, we really reiterate that these are proposed boundary lines and are not final until they are final,” Radermacher said. “We get two or three different options out there in front of people, and that can be confusing.”

Mayor Greg Zylka asked Radermacher if he felt there was a lot of interest among residents in the boundary changes. Aside from a possible change in polling place, he questioned if it would really mean a lot to most people in town.

Radermacher said the people he had spoken with who would possibly be moved to a different ward had no opposition to the change in boundaries. However, he said it was important for the Council and city staff to communicate with residents about polling places.

This may particularly be felt by some residents in the southeast part of Little Falls. Currently, as part of Ward 1, they vote at the Initiative Foundation. It is possible, however, that some residents will be moved into Ward 3, which would mean their polling place would be the Bethel Lutheran Church on the west side of town.

Council members Brad Hircock and Leif Hanson said they had both received one question from constituents about redistricting. Hanson said he felt it was most important that, once the new boundaries are drawn, that the city communicates clearly with residents where their polling place will be for the 2022 election.

“I think for this first go-around — by all means, I’m certainly willing to listen to people — but I think we need to just make the best decision to get through 2022’s election,” Hanson said. “Then, with the charter commission, we’re really going to be getting the input.”

City Finance Director Lori Kasella clarified that, once the new boundaries are determined, the county will send out a notification to anyone who has a change of polling location. That is a state requirement.

Radermacher said he doesn’t anticipate any of the current polling locations — the Initiative Foundation, City Hall and Bethel Lutheran Church — will change. The only difference, for some residents, will be which of those will be their precinct.

Radermacher added that he planned to be on a webinar with the Secretary of State, Tuesday, to get answers to some of his questions regarding the redistricting process. One of the biggest of those is what level of modification to a boundary would make it necessary for an elected official to run for re-election in 2022 even if their current term is not up.

Four of the seven council spots, along with mayor, will be on the ballot in 2022. However, changes to the boundaries — particularly in wards 1 and 3 — might make it necessary for the three other current council members to run for re-election.

“Some have an interpretation of the rule where, if you’re changing voters, they have the right to run,” Radermacher said.

Submit a Letter to Santa

How much do you plan to spend on Christmas?