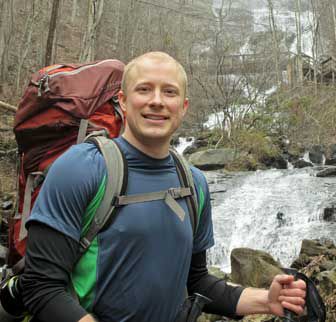 Shannon Kempenich is shown at the start of his Appalachian Trail hike at Springer Mountain, Ga., March 19. Although he started with a 60-pound pack, he soon discovered what he didn’t need and sent about one-third of the weight of the pack home. 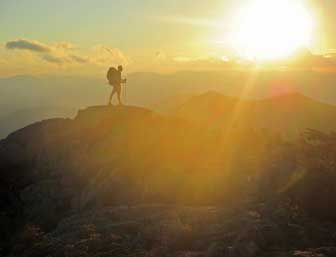 The views all along the Appalachian Trail were spectacular for Shannon Kempenich. He is pictured here hiking during one of the beautiful sunrises. 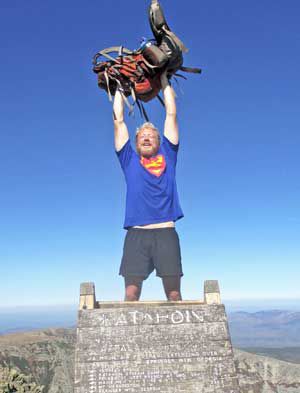 Shannon Kempenich stands at the end of his Appalachian Trail hike at Mount Katahdin, Maine, Sept. 27. The journey of a lifetime took him through more than 2,100 miles of peaceful wilderness and many adventures.

Shannon Kempenich is shown at the start of his Appalachian Trail hike at Springer Mountain, Ga., March 19. Although he started with a 60-pound pack, he soon discovered what he didn’t need and sent about one-third of the weight of the pack home.

The views all along the Appalachian Trail were spectacular for Shannon Kempenich. He is pictured here hiking during one of the beautiful sunrises.

Shannon Kempenich stands at the end of his Appalachian Trail hike at Mount Katahdin, Maine, Sept. 27. The journey of a lifetime took him through more than 2,100 miles of peaceful wilderness and many adventures.

Shannon Kempenich, Little Falls 2003 graduate, spent six months of this year doing something very few people experience – hiking the entire Appalachian Trail, from Georgia to Maine. After considering it for the past few years, he decided that this was the year to do it and made the arrangements.

“I needed to do this – to go on a long adventure, something that challenged me,” he said.

Kempenich had attended the University of Minnesota-Duluth after graduating from high school and then was deployed to Iraq. After returning from deployment, he resumed his college education at North Dakota State University in Fargo, graduating with a degree in finance.

While still in college, he started a video production company, working on television commercials and website videos. After transitioning to working with only website development, which usually meant 80-hour work weeks, he started pondering ways to take a break.

“I started to prioritize things in my life; to do the things I really wanted to do in life,” he said. “The business allows me to let my employees take care of the technical things while I’m gone.”

When he returned from deployment, Kempenich had taken a trip to Glacier National Park in Montana and met a young man who had hiked the whole Appalachian Trail with his father. During the long, cold winter last year, he got to thinking about that and decided to do it.

“There will always be excuses not to do something, but I made the decision to go after it,” he said.

Ideally, Appalachian Trail hikers who intend to cover the whole trail — more than 2,100 miles — start in Georgia in early spring and hike north through the summer, ending in Maine just as autumn sets in. Kempenich left himself about a month to put his plans in place before he needed to be at the starting point.

“I had some camping gear and bought more hiking clothes and other gear like a hammock. I found the ‘Cadillac’ of hammocks which lays a lot flatter. It was probably my favorite piece of gear,” he said.

The hammock had a rain fly and weighed about as much as a one-person tent.

“I did it alone, but met plenty of people on the trail,” he said. “There were day-hikers, section-hikers and through-hikers like me. Every night when I stopped I would see people I had met. Some I became really close friends with.”

His backpack weighed 60 pounds when he started, but very soon he removed what he didn’t need and sent it home, decreasing the weight by one-third.

“You soon realize what you need and what you don’t need,” he said. “I sent home a stove and fuel that was too heavy and too large. There was a large cooking pot and some clothing.”

There are “hiker boxes” all along the trail where hikers leave things they didn’t need for hikers to take.

“Hikers are constantly eating all we can,” Kempenich said. “Every four to six days, you go into a town to a grocery store to resupply. I always looked forward to resupply days, when I would eat at a restaurant and usually take a shower.”

He found himself eating peanut butter with every breakfast and lunch and is now so sick of granola bars that “unless I’m starving, I can’t eat one.” What he really craved in town were salads, fruit and vegetables.

He carried a guide book which showed where to find water sources, shelter and the next town. He described beautiful views along the entire trail.

“In the White Mountains in New Hampshire, I felt like I was in ‘Lord of the Rings’ – it was absolutely gorgeous,” he said. “I played the movie soundtrack while going through there.”

There were also scary moments on the trail.

In about early April, while hiking in North Carolina, Kempenich was hiking in the cold rain. He realized the weather was getting worse and wanted to stop, but the first shelter he came to was full. He pushed on through the sleet, which turned to tiny hail and then into an all-out Minnesota-type blizzard. He started running to get his blood flowing, while his fingers were so cold he could hardly move them.

“The next shelter was packed, probably 13-15 people in a shelter for six, so I set up the hammock out in the snow.”

Although he didn’t sleep much that night, he got going again the next day – one foot in front of the other.

“I hiked in torrential downpours and every kind of weather,” he said.

Just north of Daleville, Va. he encountered a wild animal-kind of adventure. While sitting in his hammock reading a book at night, he heard noise in the brush behind him. After shining a light, throwing rocks and yelling, whatever it was left.

“The next morning I found out that a girl on the other side of the shelter had been throwing up in the woods,” he said.

Kempenich acknowledged that he likely scared away two mountain lions that had been stalking the girl.

The best part of the adventure was the people he met.

“That’s what makes the trail so special,” he said. “There were so many people from different backgrounds and walks of life. People are on the trail for different reasons.”

Appalachian Trail hikers usually look quite different at the end of the trek due to the physical rigors of the hike. Changes often happen internally as well.

“After living in the woods for six months with a completely different lifestyle, it’s hard to come back and get reintegrated,” he said. “There is all this stuff screaming, ‘Buy buy, buy.’”

Having experienced the return from a deployment, Kempenich compared the two.

“In some respects it’s like coming back from a deployment, but with no battle buddies near for support,” he said. “I don’t know if I’ll ever see most of my friends from the trail again.”

Kempenich has been back just more than a month and is still figuring out what he should be doing every day.

“After every day in a peaceful wilderness, it’s a change,” he said. “The guide book ends with the trail. It doesn’t tell you what to do the day after you’re done.”

For the rest of his life, there will be the memories of the adventure of a lifetime – the awe-inspiring sights and the good trail friends.

Kempenich described hiking up to Mount Katahdin, the end-point of the trail, Sept. 27.

“It’s such an amazing mountain,” he said. “There were some of the most beautiful views of the whole trip. The trees had started turning. To finish there was absolutely breathtaking.”

Do you believe land designated as agricultural should be allowed to be rezoned for residential purposes?