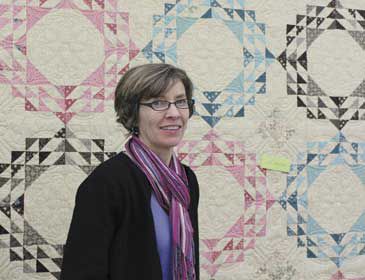 Sue Poser, of Pierz, has been named 2015 Quilter of the Year by Minnesota Quilters, Inc. Poser has owned Gruber’s Quilt Shop in Waite Park for over 30 years. 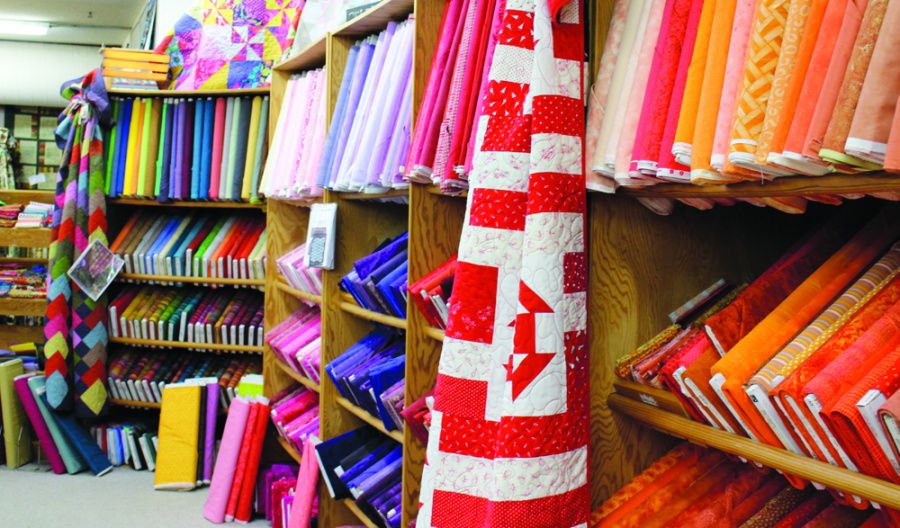 Gruber’s Quilt Shop, in Waite Park, offers a wide variety of fabrics, patterns, classes and other quilting resources. It was voted one of the best quilting shops in the nation.

Sue Poser, of Pierz, has been named 2015 Quilter of the Year by Minnesota Quilters, Inc. Poser has owned Gruber’s Quilt Shop in Waite Park for over 30 years.

Gruber’s Quilt Shop, in Waite Park, offers a wide variety of fabrics, patterns, classes and other quilting resources. It was voted one of the best quilting shops in the nation.

A man with a bear goes to a quilting party, followed by 50 nuns drinking margaritas.

This may sound like the setup for a ridiculous joke, but it’s a true story from the remarkable life of Sue (Gruber) Poser, the 2015 Quilter of the Year for Minnesota Quilters Inc.

Poser is the third-generation owner of Gruber’s, a “Laura Ingalls Wilder” style shop and community hub, and now an award-winning quilting mecca.

The business began with Poser’s grandparents as a small general store in Genola. Over the years, the shop pieced together contributions from family members, including parents Gene and Miller Gruber, of Genola, and many siblings.

It eventually included everything from quilting supplies to movie rentals, although it was particularly famous for its meat market and its quilting parties.

This madcap combination of offerings is what sparked the previously-mentioned incident with the nuns.

A man had brought a bear into the meat market for processing and, while he was negotiating, saw a group of 50 women enjoying margaritas from the bar across the street as part of a quilting party.

In the midst of the revelry, one member of the crowd was overheard saying, “We have to get back to the convent before they lock the doors at 8!”

This unique scene, Poser said, sums up the magic of Guber’s — that so many different people came together to make something altogether unique.

She said even today, people comment that they miss the smoky, savory smell of sausage that used to permeate all the fabric at Gruber’s.

“Not a day goes by, 15 years later, people still know what Gruber’s was in Genola,” Poser said. “We had so many different things going on at Gruber’s all the time. It was everything working together that made it what it is.”

Poser herself has a story colorful and intricate as the shop. She started quilting at age 5, taught by her grandmother.

“When you visited her, you were always making something,” Poser said. “It became some really special time with her.”

From there, she went on to major in finance at St. Catherine University. Although she worked a number of other jobs, including at the Star Tribune and Medtronic, something always brought her back to Gruber’s. She said she felt like it was meant to be.

“I’m a huge believer in my guardian angel,” Poser said.

She’s stayed busy ever since. In spite of three moves - from Genola to downtown St. Cloud to Waite Park, the shop still has a huge following.

She ran the Shop-Hop for nine years and said last year was the most well-attended yet, although she’s since handed it off to someone else to free up her time for other things.

“There’s still only 24 hours in the day,” Poser said. “There’s so many things I’d love to do, but you can’t do everything.”

Even with more than 30 years of quilting industry experience, Poser was surprised to be named Quilter of the Year.

“I never in a million years dreamt that I’d get it,” Poser said. “It’s a huge honor to be recognized by my industry.”

“She’s done an awful lot for quilting in Minnesota,” Ellis said. “She’s one of my favorite people. I’ve been a lot of places, but her shop is my favorite.”

In spite of her accomplishments, Poser remained humble.

“I’m a cheerleader, that’s basically my role,” Poser said. “I have people here who are much more talented than me ... I hardly touch most of it anymore, and they do a really really good job.”

Poser’s tendency to stay out of the limelight was another reason she was chosen as Quilter of the Year, said Ellis.

“She’s always so helpful to others and never promotes herself,” Ellis said. “She does have a body of work, but most people never see it because she’s helping others.”

As such, Poser is a common thread that binds huge sections of the quilting community together; as a leader in quilting, she’s helped a lot of people find success in the quilt and pattern-design industry.

“I’m really very fortunate. I consider it a huge, huge gift to be able to help people,” Poser said. “You just build everyone up to be the best they can be.”

Many of the big names in quilt design and artistry work with Poser in some way or another, or have done so in the past.

But she’s also woven together community in other ways. Poser was diagnosed with multiple sclerosis (MS) a number of years ago, but that has yet to discourage her from doing what she loves.

“If God gave me MS, it was to slow me down because otherwise I’d never stop,” Poser said.

People struggling with a recent diagnosis or life change often come to Poser for support, she said.

And she loves being a resource, particularly for other women.

In 2004, Poser was recognized by the White House as a prominent leader among women in business when First Lady Laura Bush visited Gruber’s.

She said Gruber’s is carrying on a tradition started long ago with groups of women coming together and bonding over quilting bees.

“Even if you were quiet and didn’t know anyone, you could show up to a quilting bee and be part of a group,” Poser said.

Now, Gruber’s brings together people, especially women, from all over to appreciate the artistic and story-telling possibilities of quilting, and pass those skills on to the next generate.

She said it’s also a great way to relieve stress.

“Quilting is cheaper than therapy,” Poser said with a laugh.

Poser added her family and her home in Pierz help keep her grounded.

She credits her husband, Gene, as a major factor in her success.

Her three daughters Danielle, Theresa and Courtney seem cut from the same cloth as Poser, finding success in a variety of fields; one is a marriage therapist, another is a pastry chef and the third is a manager at Gruber’s.

In her spare time, Poser loves to read, travel and quilt some more.

Whatever Poser does, it all comes back to quilts.

“It’s a wonderful art form, and I’m so grateful to not just be working in it, but living it,” Poser said.

Do you believe land designated as agricultural should be allowed to be rezoned for residential purposes?