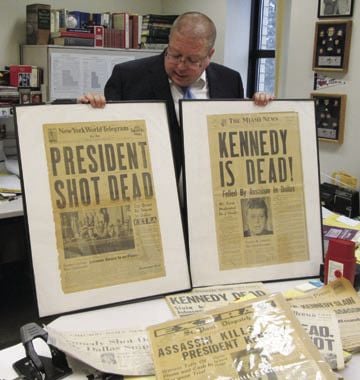 Todd Kosovich shows two framed newspaper headlines telling the world what happened in Dallas, Texas, Nov. 22, 1963. Below is a poster and other political items he has collected over the years. The walls in his office in the Morrison County Government Center are full of artifacts from different political and historical events. 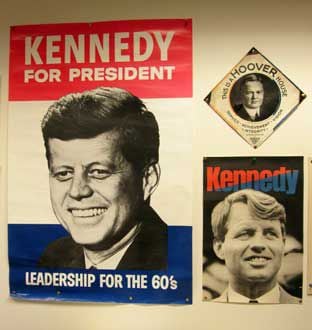 Todd Kosovich shows two framed newspaper headlines telling the world what happened in Dallas, Texas, Nov. 22, 1963. Below is a poster and other political items he has collected over the years. The walls in his office in the Morrison County Government Center are full of artifacts from different political and historical events.

Friday marks the 50th anniversary of the assassination of John Fitzgerald Kennedy (JFK), the 35th president of the United States. The date, 50 years ago, was Friday, Nov. 22, 1963.

Assistant County Attorney Todd Kosovich has an extensive collection of memorabilia from the Kennedy years. He has collected newspapers, radio and television news broadcasts and more. He said he is one of only 12 people in the United States who has gone into such depth on the topic. He said the other collectors and he communicate by email and share every scrap of original coverage they find.

“I am still collecting,” he said. He said he knows there is a lot out there he doesn’t have, yet.

“Mutual Radio Broadcasting had 511 affiliated stations during the 1960s,” Kosovich said. “I, and other collectors, have only about 33 minutes of coverage from that company on the weekend JFK was assassinated.”

Kosovich began his love of history when he was about five years old.

“It was during Thanksgiving in 1966 when my aunt Mary brought postcards from Dallas with pictures of the scene of the assassination,” he said. “It was news to me and I wanted to know more.

“I began asking people what was it like the day JFK was shot. I began (the journey) to learn what happened,” he said.

At age 10, Kosovich began his collection of newspapers, radio and television broadcasts. He obtained his first audio recording of news coverage in 1971 and started collecting newspapers in 1973, just before the 10th anniversary of the assassination.

“I also watched the entire Watergate hearings,” he said. “I never went out to play that summer (1973).”

He said there is no doubt that his love of history and his collecting led him to be a lawyer and a prosecutor.

“The first paper I purchased on the JFK assassination was the Detroit News,” he said. “Today, I consider myself an expert on the media coverage of the event. I have 348 hours pertaining to that weekend, through the funeral, the burial of JFK and the shooting of Lee Harvey Oswald. My collection contains 132 hours of radio and television coverage just from Nov. 22, 1963, which includes 38 hours of local Dallas TV and radio coverage.”

In the past 40 years, Kosovich has collected audio from news coverages, the election coverage, JFK’s speeches and the radio versions of Meet the Press.

“The assassination is the pillar of my library,” he said.

“I just picked up a Nov. 22, 1963 issue of the Chicago Daily News that has the headlines ‘Kennedy Shot Down by Dallas Sniper.’ It said that JFK and (Texas Gov. John Bowden) Connelly were still alive at 12:57 p.m,” he said.

A 12:42 p.m. release from the San Francisco newspaper said JFK was shot.

Kosovich finds the time line of that hour fascinating. One can find out a lot about the facts just from the times reported from the press, he said.

He said that the first shot missed Kennedy and the second one hit his back, went through his neck and hit Connelly, who was sitting in front of Kennedy, slightly to the left. The bullet broke Connelly’s wrist and entered his leg. The third shot hit JFK in the head. It was the fatal shot.

“Secret Service Agent Clint Hill, the man who jumped on the back of JFK’s car, always said that if he had reacted faster, he may have been able to take the fatal shot and save the president,” said Kosovich.

Kosovich said that during the parade in Dallas, there were only two telephones in the motorcade. One was for JFK and the other was with the press.

“Merriman Smith from UPI sent the first bulletin after the three shots were fired,” said Kosovich, who has the first broadcast sent around the country by ABC radio.

“Reporter Robert MacNeil left the press bus to find a phone. He entered the Dallas Book Depository and encountered a man who turned out to be Lee Harvey Oswald. He asked Oswald where the phones were,” said Kosovich. “MacNeil didn’t realize who he spoke to until he saw Oswald later on the news.”

Some of the best books on the subject of JFK’s assassination, said Kosovich, are written by Vince Bug-liosi, the lawyer who prosecuted Charles Manson. His books are “Reclaiming History,” and more recently published, “Four Days in November.”

Kosovich admits his extensive collection has no monetary value. He said only historians would be interested in listening to hundreds of hours of material on JFK.

“For me, it answers the questions I asked my parents, aunts and uncles years ago, ‘What was it like the day President Kennedy was shot?’ Through my recordings, I relive that entire weekend at least once a year,” he said.

While there are almost as many conspiracy theories as there are people who believe them, Kosovich said it was definitely Lee Harvey Oswald who pulled the trigger.

“It was a straight, simple murder case,” he said. “There was no second bullet that hit Connelly, no secret service man who had an accident with his gun,” he said.

The Warren Commission was completely honest. The evidence showed the truth, said Kosovich.

“I would say that those with conspiracy theories have not read the Warren Commission report,” he said.

Kosovich will be on Party Line with KLTF Radio Friday. He will play several clips from the day of the assassination plus clips from newscasts hours before the shooting.

Parts of his radio newscast collection is on radio tapes.com. His JFK clips include broadcasts from ABC and NBC radio coverage of Nov. 22, 1963.

“I love history and newspapers are my souvenir of that very day in question,” said Kosovich.

Do you believe businesses should be able to open without state imposed limitations, provided they have their own COVID-prepared plan?