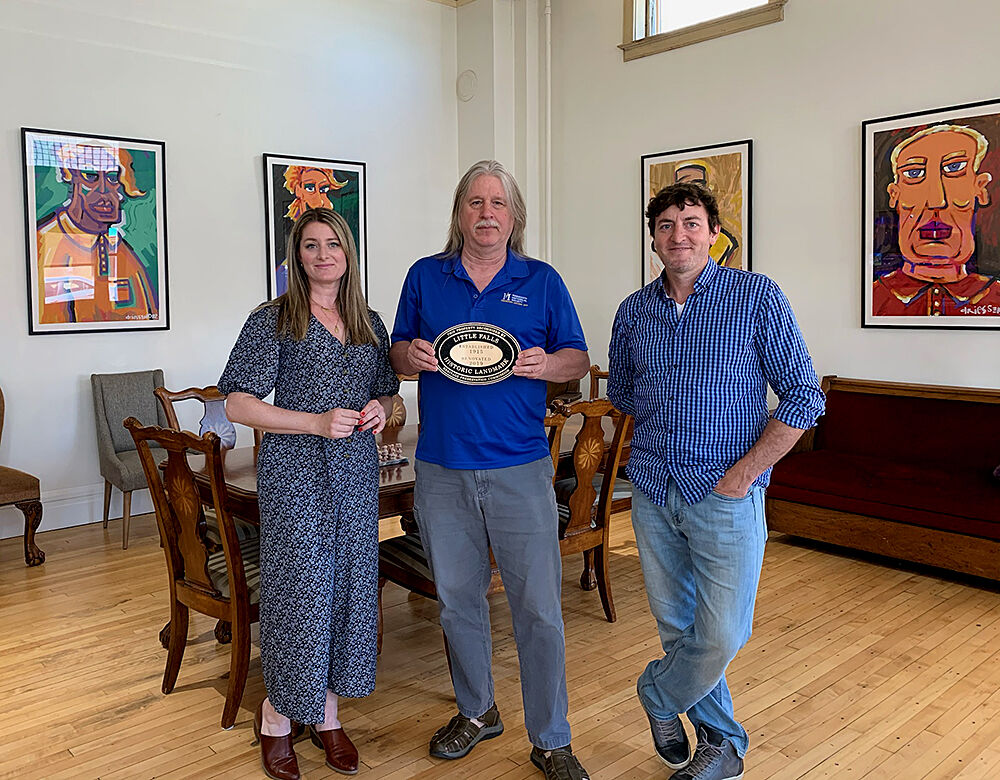 Little Falls Historic Preservation Commission President Gary Block, center, presents Eugenia deGaspari, left, and Michael Roach Jr. with a plaque signifying their building, the Vertin, at 70 Broadway Ave. E. as a historic landmark. The couple recently renovated the 106-year-old building and are now renting it out as a private event space. 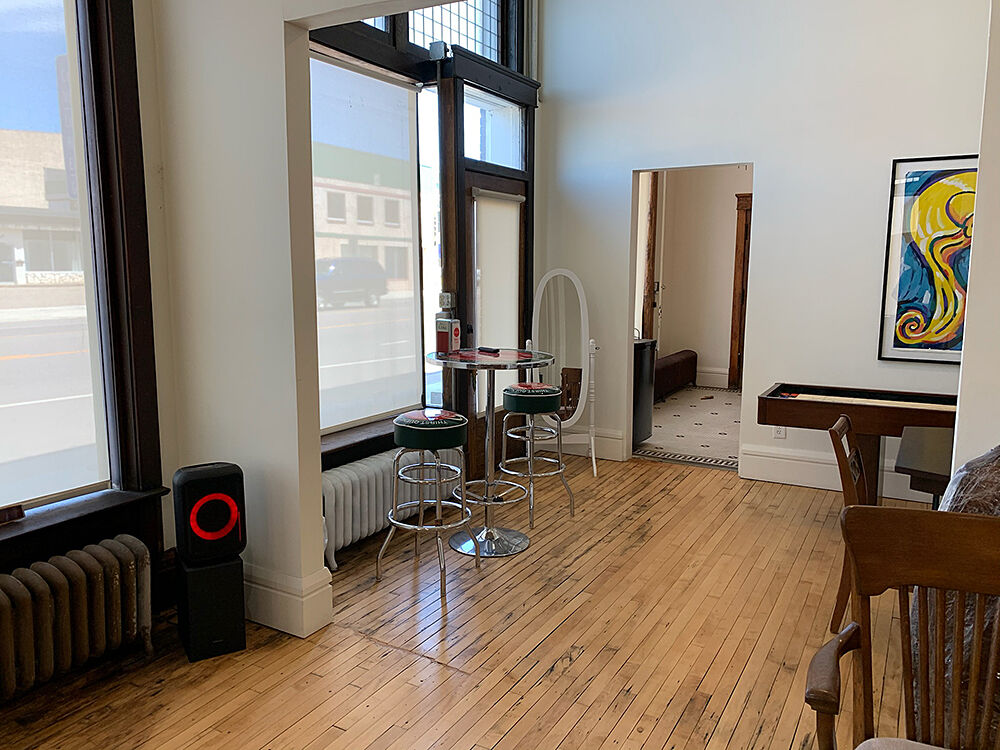 An open floor plan leaves room to play games or just relax and hang out at The Vertin Club.

Little Falls Historic Preservation Commission President Gary Block, center, presents Eugenia deGaspari, left, and Michael Roach Jr. with a plaque signifying their building, the Vertin, at 70 Broadway Ave. E. as a historic landmark. The couple recently renovated the 106-year-old building and are now renting it out as a private event space.

An open floor plan leaves room to play games or just relax and hang out at The Vertin Club.

A major renovation project has given an old building a new look.

Little Falls residents Michael Roach Jr. and Eugenia deGaspari were recently recognized by the Historic Preservation Commission for breathing new life into the historic Vertin building in downtown Little Falls. The couple was presented with a plaque commemorating the building as a Little Falls Historic Landmark, March 26.

“We couldn’t be more appreciative,” Roach said. “I think it’s great to have a program like that. It helps give the town its character.”

Locating at 70 Broadway Ave. E., the building has been standing since 1915, when it was constructed by John Vertin. It was originally used, at least in part, as the Morrison County Treasury. In the 106 years since, it has been the home of a barbershop, Interiors by Bev, an insurance office and a tattoo parlor, among many others

The building is perhaps best known as the decades-long home of Dr. Robert Miller’s dentistry practice. Since he retired in 2015, after 54 years of service, the building had remained vacant. Roach and deGaspari purchased the building from Miller in 2017.

Over the years, likely after a fire in the building around 1970, a drop-in ceiling was put in on the first floor, covering up the original tin ceiling. This also resulted in more than 20 windows being boarded up. There were walls put in after the original construction to make room for separate offices. The original hardwood floor on the main level was still there, though it was covered by as many as seven layers of updated flooring in some places.

“It was a very sound building still, it had just so much character behind it,” Roach said. “I tried to peel back, but keep whatever was here.

“When I got it, it was in great shape,” he added. “In fact, one of the biggest complaints I had was, the craftsmanship was so good from back in the day, it was the biggest pain in the butt to pull some of this stuff apart. Huge nails, everything was done by hand and probably by some very strong men. Taking their work apart was no fun. Everything was by the book.”

Roach and deGaspari did almost all of the restoration work themselves, enlisting outside help for only the electrical work and restoration of the original hardwood floor. That included making new window frames from scratch and finding old doors and frames to match the originals.

Other pieces, such as some small dents in the kitchen ceiling that appear to be caused by firefighters, and a tile floor in one room were left alone to add to the character of the space.

“It was more taking out and aesthetically fixing than building anything,” Roach said. “It was kind of room-by-room, piece-by-piece, saying, ‘Alright, what do we do with this?’ The trim was all gone. There was just so much that needed to be, not made new, but put together. Everything’s there, it’s just a matter of deferred maintenance.”

Since completing the renovation, The Vertin Club on the main floor has served as a rental space for private parties, such as birthdays, bridal or baby showers, poker nights or watch parties for big games and events. It offers about 1,250 square feet of open space and includes WiFi, big screen TVs, shuffleboard, a pool table, board games, dominoes, cards, poker chips and a full kitchen.

In the end, they hope it will provide something different to the downtown atmosphere and provide the community with a cool place to gather and hang out.

“It’s a cool space,” Roach said. “To me it was, let’s do something for Little Falls. I grew up here. I would love to see the downtown turn into more of the — I love the idea of little shops around that are enjoyable to go to. I think the shops in Little Falls are great. This place — and kind of everything we do around here — is always, what do we want to see Little Falls have? Alright. Can we help offer that?”

The second floor has been converted into an apartment, with much of the original character still intact. Roach and deGaspari hope to rent it out as an Airbnb.

It is the first project of this scale the couple has tackled since moving to Little Falls in 2016.

Roach grew up in Randall before spending several years overseas working in the renewable energy field. He met deGaspari — a native of Mendoza, Argentina — while in her home country, where he lived for nearly seven years.

The couple was living in Nicaragua when they found out they were expecting their first child. At that point, they decided to move back to Minnesota to raise their family.

Along with the project downtown, the couple has also flipped houses they currently own as rental properties. Roach also helps with his family’s real estate development business while deGaspari has taught Spanish at Mary of Lourdes and owns a photography business. They have two children.

“(We wanted to) hang around, enjoy the kids,” Roach said. “This lets us set our own schedule a bit, but still kind of work toward a bit of a business.”

To learn more about The Vertin Club, visit www.thevertin.com. That also includes information on how to rent out the space.

deGaspari said COVID-19 put a bit of a damper on the business in the early going, but the couple is confident there are brighter days ahead.

“It will come back strong,” Roach said. “I think everyone’s anxious to come back. Give me anything. I’m happy to participate.”

"This place — and kind of everything we do around here — is always, what do we want to see Little Falls have? Alright. Can we help offer that?” Michael Roach Jr.

Will you attend the Little Falls Dam Festival?