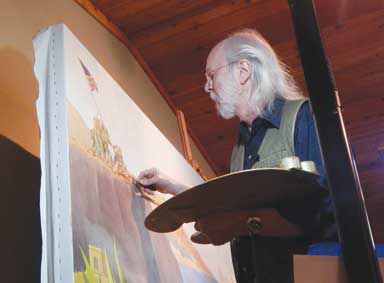 Charles Kapsner, standing on a scaffold, added authentic Iwo Jima sand to the ground where the flag was famously raised, included as one part of his 8-foot by 10-foot painting depicting the history of the U.S. Marine Corps. Photo by Jim Wright 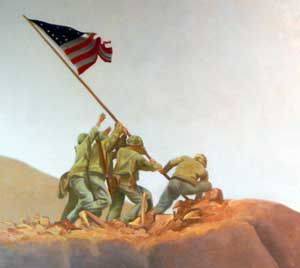 The momentous flag raising on Iwo Jima during World War II is again being immortalized — this time as a part of renowned artist Charles Kapsner’s 8-foot by 10-foot oil painting commemorating the famed service of U.S. Marines in the wars of the past 2 1/2 centuries.

The sterling realism of the artwork received an inspired stroke of the brush Wednesday in Kapsner’s Little Falls studio. Some of Iwo Jima’s volcanic sand was incorporated into the painting.

“It was an exciting moment for me,” Kapsner said, after mixing the sand with oil paint. “Just to have the sand on my pallet, on my brush — this sand that has such incredible significance to World War II.”

He brushed it onto the ground in the painting where the flag pole is famously being set by the Marines, who were sent to that high ground, Mount Suribachi, to raise their banner of victory — the American flag.

Of the Marines on Iwo Jima, just 540 miles from Japan, to make that possible 5,900 died and 17,400 were wounded. Except for 1,083 prisoners, the entire garrison of 23,000 Japanese was wiped out, many committing “honorable” suicide rather than being captured.

Kapsner has completed three, 8-foot by 10-foot paintings that have been installed in the Minnesota State Veterans Cemetery Committal Hall. The cemetery is next to, but not part of, Camp Ripley. The completed paintings honor veterans of the Army, Navy and U.S. Coast Guard and are part of the Historic Veterans Art Project.

The Marines painting will be installed at Committal Hall Tuesday, May 22, in time for viewing during the Memorial Day ceremonies at the Minnesota State Veterans Cemetery Sunday, May 27.

But, before the May 27 ceremony, the painting will be dedicated Saturday, May 26, during a special ceremony at 2:30 p.m. More information about that event will be published as the event draws near.

Kapsner’s fifth commissioned painting will commemorate the history of the Air Force. All of his work for the Veterans Cemetery is being paid for by donations.

“The biggest impact I’ve seen, is when the veterans are seeing the paintings with the younger generation and those young people start asking questions about what’s in the paintings,” said the cemetery’s administrator, Erik Sogge. “It opens up a dialogue between them about serving in the military.

“A lot of times, veterans aren’t open to talking about their service, but they use the paintings to talk about it — they tell their stories. I think it has a therapeutic effect for some veterans,” Sogge said.

He was on hand when the sands of Iwo Jima were incorporated into the painting, Wednesday, as were Minnesota State Veterans Affairs Administrator of Memorial Affairs, David Swantek, Minnesota Military Museum Curator Doug Thompson and Tell-A-Vision Productions’ Jim McAlister.

Committal Hall will be open to the public Saturdays and Sundays, from 1 p.m. - 4 p.m., after Memorial Day, May 28, until the Little Falls Area Arts and Crafts Fair, Sept. 8 - 9.

“People are coming from all over,” Sogge said.