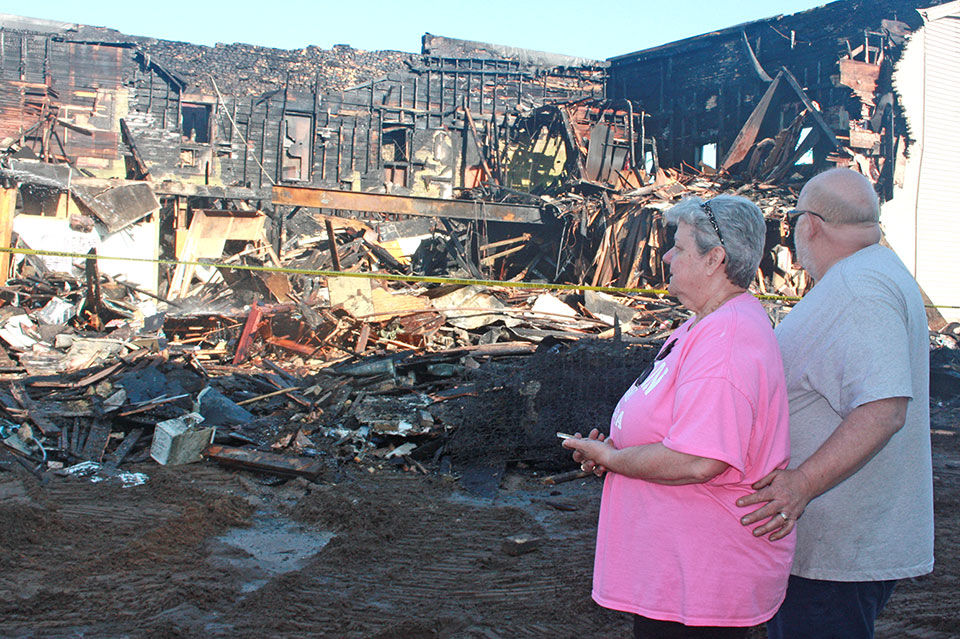 Owners Deb Boelz, left, and Jeff Tschida look over the rubble of what once was the West Side Bar, but despite feeling the loss, they are thankful no one was injured or killed in the fire, Wednesday, June 5, 2019. 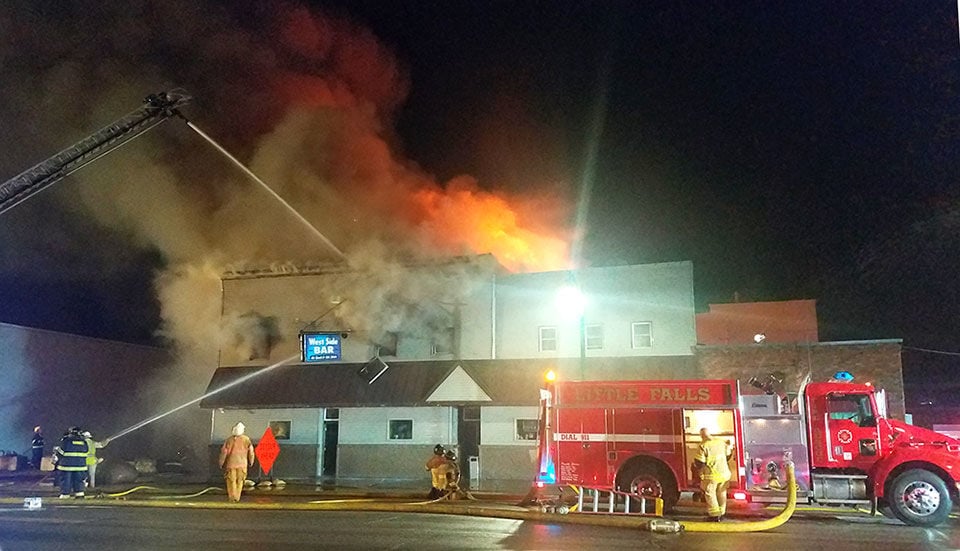 The Little Falls Police Department was assisted by fire departments from Pierz, Randall, Camp Ripley and Brainerd, in Wedneday’s fire at the West Side Bar in Little Falls.

When Jeff Tschida and Deb Boelz, owners of the West Side Bar, tucked in for the night, they never anticipated they would watch their business go up in  flames a few hours later.

“The fire started shortly after 1 a.m., so the bar was still open and we had customers in there,” Boelz said.

Five apartments above the bar were the home to seven tenants. Boelz said once the fire was discovered, one of the bartenders ran upstairs and knocked on the doors to get everyone out of the burning building.

Although the fire is still under investigation, Little Falls Fire Chief Mike Nieman said it is possible the fire was caused by lightning or something electrical.

“The power was off at one time, then the power came back on. We also had lightning during that time, but the cause is still undetermined and is under investigation,” he said.

Boelz and Tschida said they believe the fire was caused by lightning. To them how the event transpired is a little too much of a coincidence.

Nieman said the Little Falls Fire Department (LFFD) received a call at 1:15 a.m. that the apartments above the bar were on fire. It had started in the roof or attic.

Tschida said when he and Boelz arrived to bar, they initially thought the fire had been extinguished as they only saw a little bit of smoke rising.  Then all of a sudden, the building burst into flames, he said.

Because of the massive fire, Nieman said fire departments from Pierz, Randall, Camp Ripley and Brainerd, were called to assist. He estimates about 50-60 firefighters were on the scene.

“Whenever you have a massive fire like that and with an old copper roof and the construction of it with apartment buildings on top, it is hard to get to. We also struggled with the power lines in the back of the West Side Bar until the power was turned off,” he said.

Assistance was also provided by the Little Falls Police Department, the Morrison County Sheriff’s Office and the Minnesota State Patrol.

Nieman said no one was injured in the fire. However, one firefighter received a minor injury when he was hit with water in the face from a hose.

The West Side Bar building was deemed a total loss. Boelz said one apartment and the West Side Cafe were saved, but has heavy smoke damage.

The front wall of the building remained standing with the “West Side Bar” sign hanging crooked. However, it was knocked down as  it presented a danger of possibly falling into the street.

Boelz said she is very thankful for Morrison Chaplain Gregg Valentine who connected the homeless tenants with the Red Cross.

“The Red Cross team was here and got our tenants squared away for the night. That was a huge relief,” she said.

Boelz said the building was insured and that they are considering rebuilding, but will make a final decision sometime later when the dust has settled.

At this time, they are staying busy with contacting various people and organizations.

“There is just a hundred things we need to take care of and we don’t have a lot of numbers at our finger tips, but we’ll figure it out,” she said.

Since word spread rapidly about the fire, Boelz said her cellphone has rung non-stop from people in the community wanting to help. However, at this time there isn’t much anyone can do, even with the clean-up, Boelz said.

“There isn’t really anything that can be salvaged. The cash registers and the safes came out, so that is probably all we are going to walk away with here,” she said. “There are also a lot of regulations when it comes to cleaning up.”

The two purchased the bar in 2011, but Tschida has a long history with the bar as he worked there for 43 years. He was 17 when he first started.

Although they both feel the loss of the West Side Bar, both Boelz and Tschida are thankful and relieved that no one was injured or killed in the fire.

“That was all I could think of. I’m glad nobody got hurt,” he said.