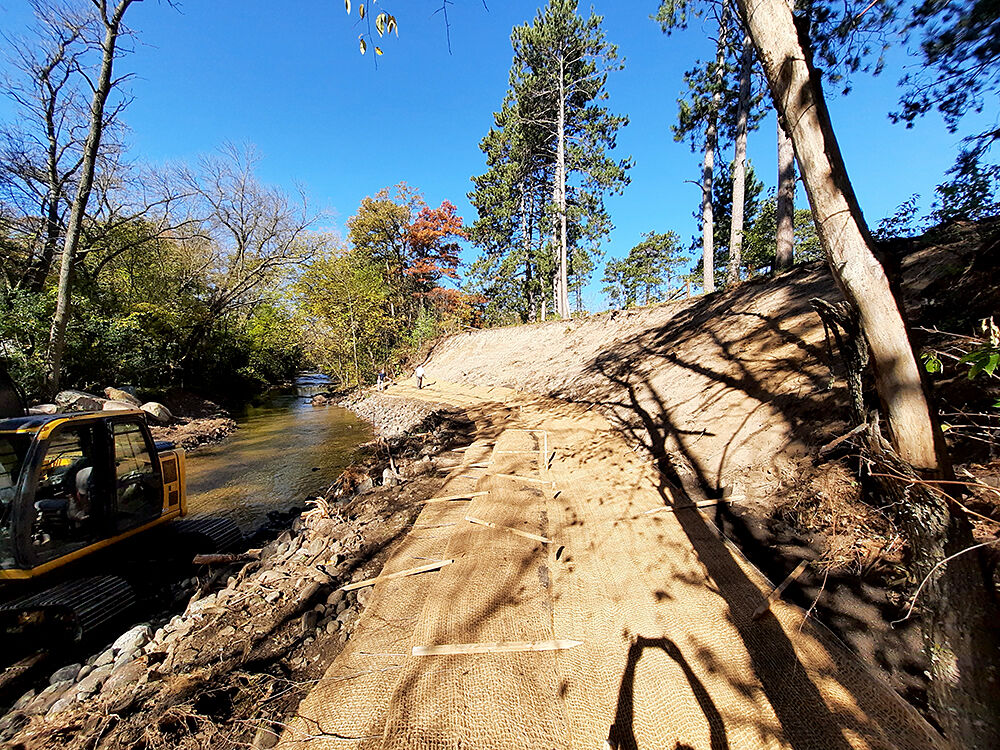 A major bank restoration project on the Hillman Creek in Pierz will prevent erosion, provide habitat for fish and other aquatic organisms and beautify the city. The project helped the city win the Environmental Excellence Award from the Minnesota Erosion Control Association. 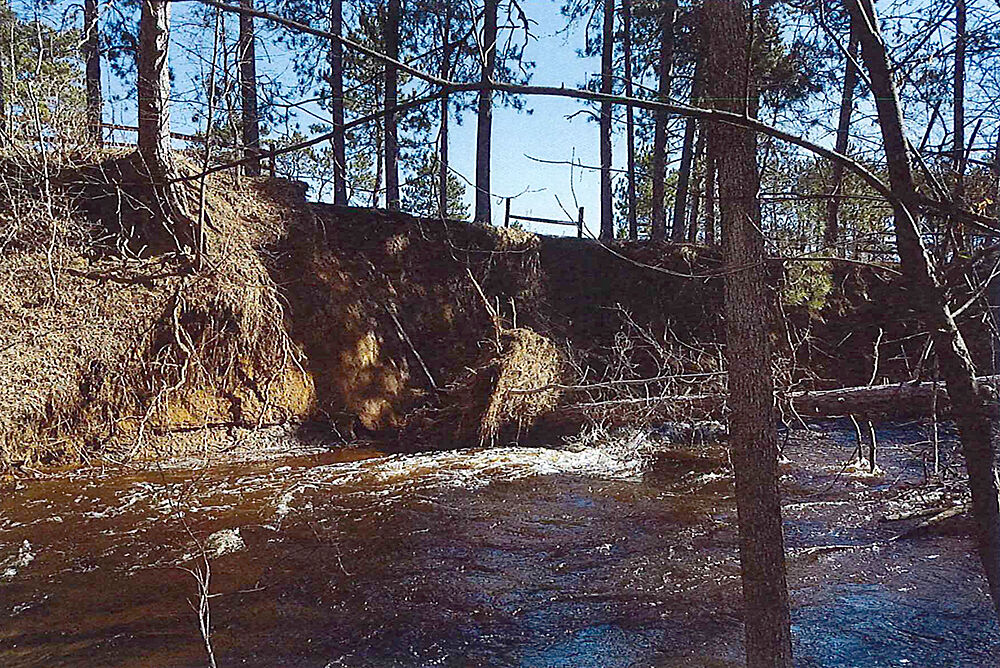 A photo taken in April 2018 shows the erosion and collapse of the bank on the Hillman Creek just off of the golf course in Pierz. 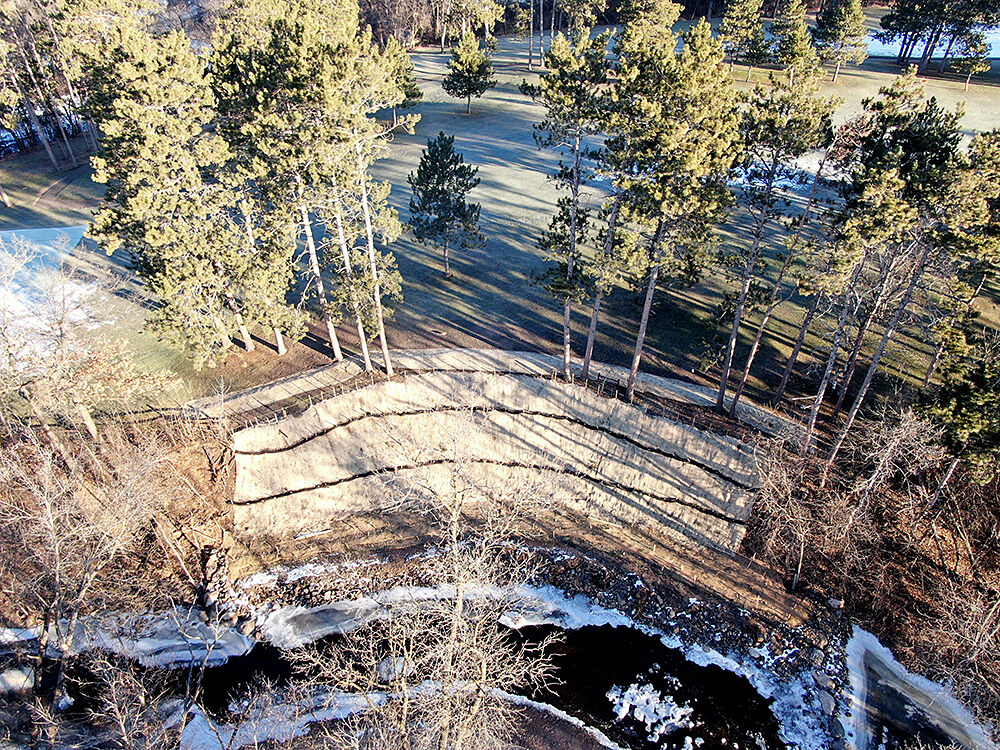 An aerial photo shows the restoration project on the Hillman Creek. 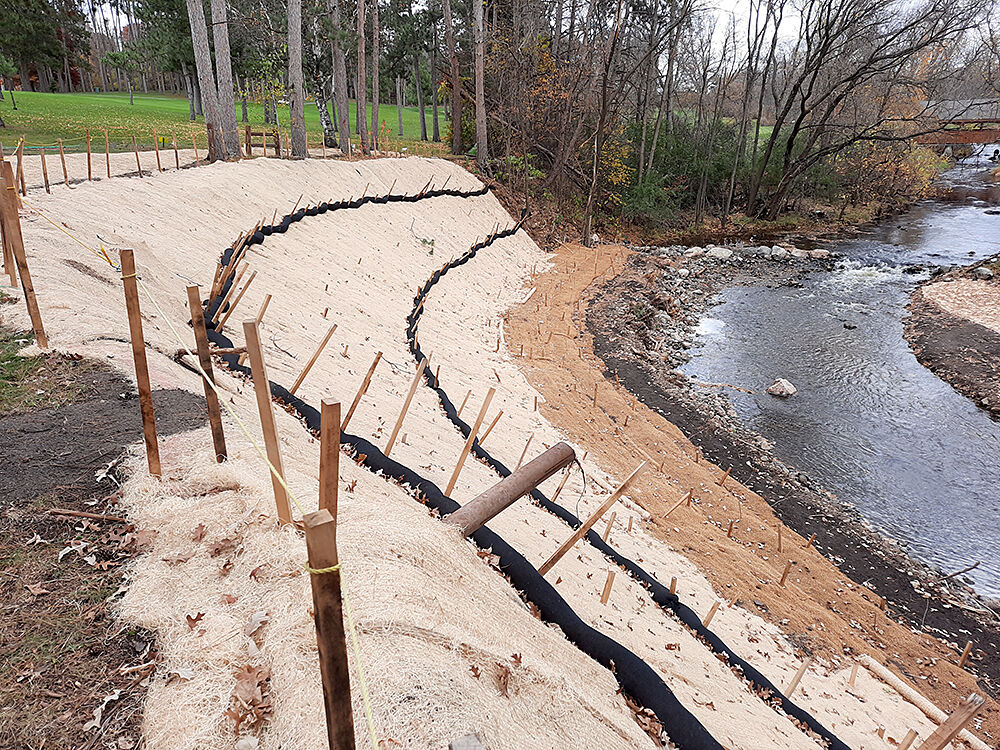 A major bank restoration project on the Hillman Creek in Pierz will prevent erosion, provide habitat for fish and other aquatic organisms and beautify the city. The project helped the city win the Environmental Excellence Award from the Minnesota Erosion Control Association.

A photo taken in April 2018 shows the erosion and collapse of the bank on the Hillman Creek just off of the golf course in Pierz.

An aerial photo shows the restoration project on the Hillman Creek.

The city of Pierz needed a project it could bank on.

A $60,000 Conservation Partners Legacy (CPL) Grant via the Clean Water Fund provided funding for just that. Not only has the project provided a new scenic vista on the Pierz Golf Course, it also saved the Hillman Creek and garnered an award from the Minnesota Erosion Control Association.

Pierz City Administrator Bob Otremba said a few years ago, erosion on the Hillman Creek near Hole 5 of the golf course was becoming a big problem. A sharp turn in the creek near the confluence of the Skunk River was undermining the integrity of the shoreline from below, while heavy rains and other natural events continued to wear away on the top of the embankment.

Trees were beginning to topple into the creek, and several more were in danger of falling. But there was even more going on that might not have been quite as easy to notice.

“That slope, every time it rained, multiple tons of sediment were falling off into the creek,” said Shannon Wettstein, district manager for the Morrison County Soil and Water District (MCSWD). “Literally, you’d have dump truck loads of sand toppling down.”

The sediment was not only impairing the fish habitat in the creek, the Skunk River downstream and the fishing lake at Pierz Campground, it was actually changing the flow of the creek itself. This caused even more stream bank loss and a decline in vegetation, exacerbating the erosion problems.

Seeing this was already a big problem that was only going to get worse, the city of Pierz partnered with MCSWD to find a solution. Wettstein went to work on an application for a CPL grant.

In the application, she highlighted the many benefits of a bank restoration project. She wrote that it would benefit fish and non-game wildlife that use the creek as a migration corridor, protect surface and groundwater by reducing impairments and “have far-reaching benefits for streamwater quality and aquatic habitat in the Skunk River, also.”

The project received the full requested amount of $60,000, which also required a 10% match from the city of Pierz. Once funds were in place, it was time to go to work.

Prior to even applying for the grant, a study was conducted by MCSWD and the DNR to determine desired conditions for the site. That was done by studying methods such as the creek’s natural meander and its annual flood cycle.

“Typically, for bank projects in the past, you’d just dump a bunch of rocks and do a riprap,” Altena said. “That’s not always as functional as other methods. With this, we were able to work with the bank to create a natural structure using wood and vegetation. Not only is it much more stable, but fish and other aquatic species can use it as a habitat.”

The bench is essentially a series of pieces of wood stacked upon one another. Hearty woods like willow and dogwood are used to help the structure hold up to the wet conditions, and soil is used in between rows for stabilization and to promote growth of vegetation.

That last piece, according to Altena, is an important one.

“The intent is to re-establish vegetation along the bank,” he said. “Rock is always going to eventually fall away. Vegetation will continue to grow and get stronger.”

Not only does the structure prevent erosion, it also uses J-Hooks to move the channel away from the shoreline and a berm at the bottom to catch any unexpected erosion that might occur.

Tony Zetah of Mid-Minn Excavation in Motley was tapped to do the work. He not only did what turned out to be award-winning work, he didn’t take long to do it in October 2020.

“The contractor did an excellent job,” Otremba said. “The job took them about five days, and it was very timely, because the river was very low at that time.”

Wettstein said the end result is something that will provide a “huge benefit” for the community in a highly visible area. It is on public land and can be used for fishing and other recreation, along with being on the golf course.

Otremba agreed that it will be enjoyed by both citizens and visitors alike.

“Any tree or vegetation matters on a golf course,” he said. “... It created quite a vista. It’s really a beautiful sight.”

The city of Pierz received the 2021 Environmental Excellence Award from the Minnesota Erosion Control Association as a result of the project.

Wettstein said it was much deserved recognition, as the city stuck by its commitment to the project. Getting the CPL grant was instrumental in making it a reality.

“Ecologically, this is the ideal design,” Wettstein said. “A lot of times, it’s something groups are not able to do because it’s expensive. The fact that the grant covered 90% of the cost was the reason the city was able to do it right.”

Did you tune in to the Masters this year?