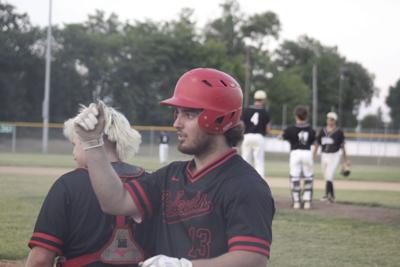 Death, taxes, and the Polecats winning in seven innings. Playing as the home team in Albertville because of the Riverfest fireworks, the Polecats beat the Villains 15-1 on Friday, July 9.

The Cats put up runs in bunches. Crooked numbers in the second and third innings set the tone leading the home nine to victory.

“We wanted to come here and start off strong and get in and get out,” said Assistant Coach Joe Kounkel.

You can’t start off much stronger than the Polecats managed to.

Jon Affeldt leadoff the inning with a single and stole second. Jack Seibert followed that up with a walk. Both runners advanced to scoring position after a groundout. Michael Olson drew a walk loading the bases. Affeldt scored on a wild pitch and Brayden Hanson drew another walk reloading the bases.

Tommy Blackstone drew the fourth walk of the inning, scoring another run for the Polecats. Alex Otto delivered an RBI single, increasing the lead to 5-0 now. Up next, Danny Blackstone singled home two runs.

More walks loaded the bases. Otto scored on a wild pitch for their sixth run of the inning on just three hits.

The very next inning, Thomas Van Culin delivered the fateful blow. He launched a grand slam over the left field wall increasing their lead even more to 12-0. It was their only hit of the inning. Van Culin was also the starting pitcher for the Polecats.

“It’s fun to come out here and play,” said Van Culin. And fun he sure had. Thomas pitched five innings earning the win striking out five and topped it off with the grand slam to boot, driving in as many runs as he allowed hits.

Three more insurance runs in the bottom of the fourth and the lead was 15-0. The Villains managed to score once during the sixth inning, but it was too little too late. 15-1 was the final in another seven inning victory for the home team.

With just nine guys available on both sides, it was survival of the fittest. Although Monticello did more than merely survive, “you have nine or 10 guys that are really good players. We have 25 guys that could start on anybody’s team,” mentioned Joe Kounkel.

Their mindset to cap off the regular season is simple, play hard and play confident. And right now, their confidence is sky high.

With the top seed locked up for the Sauk Valley East Division already, there’s no reason for the Cats not to be overflowing with confidence.

With the first seed locked up, the rest of the regular season is more a formality. Clearwater took advantage of that edging Monticello 12-11 on Sunday, July 11.

The game was tied 8-8 heading into the eighth inning. The River Cats scored three during the bottom of the inning with the Polecats matching their effort during the top of the ninth inning before Clearwater walked it off as the first team to beat Monti in league play.