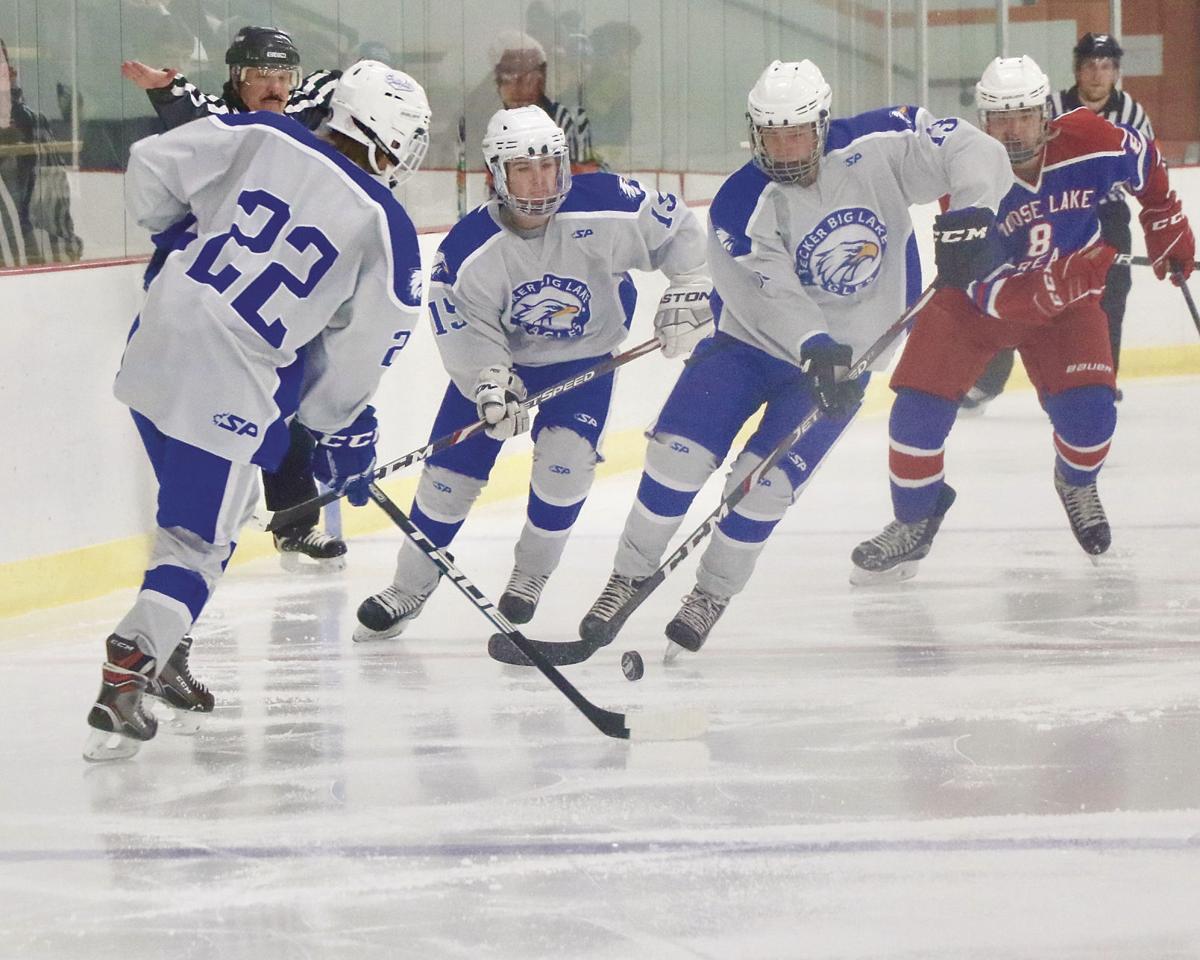 Becker-Big Lake’s Bennett Tatge (13) moves the puck up the ice against Moose Lake on Tuesday, Nov. 26 at the Princeton Ice Arena. To the left of Tatge are Jack Beckstrom (22) and Austin Barzee (15). 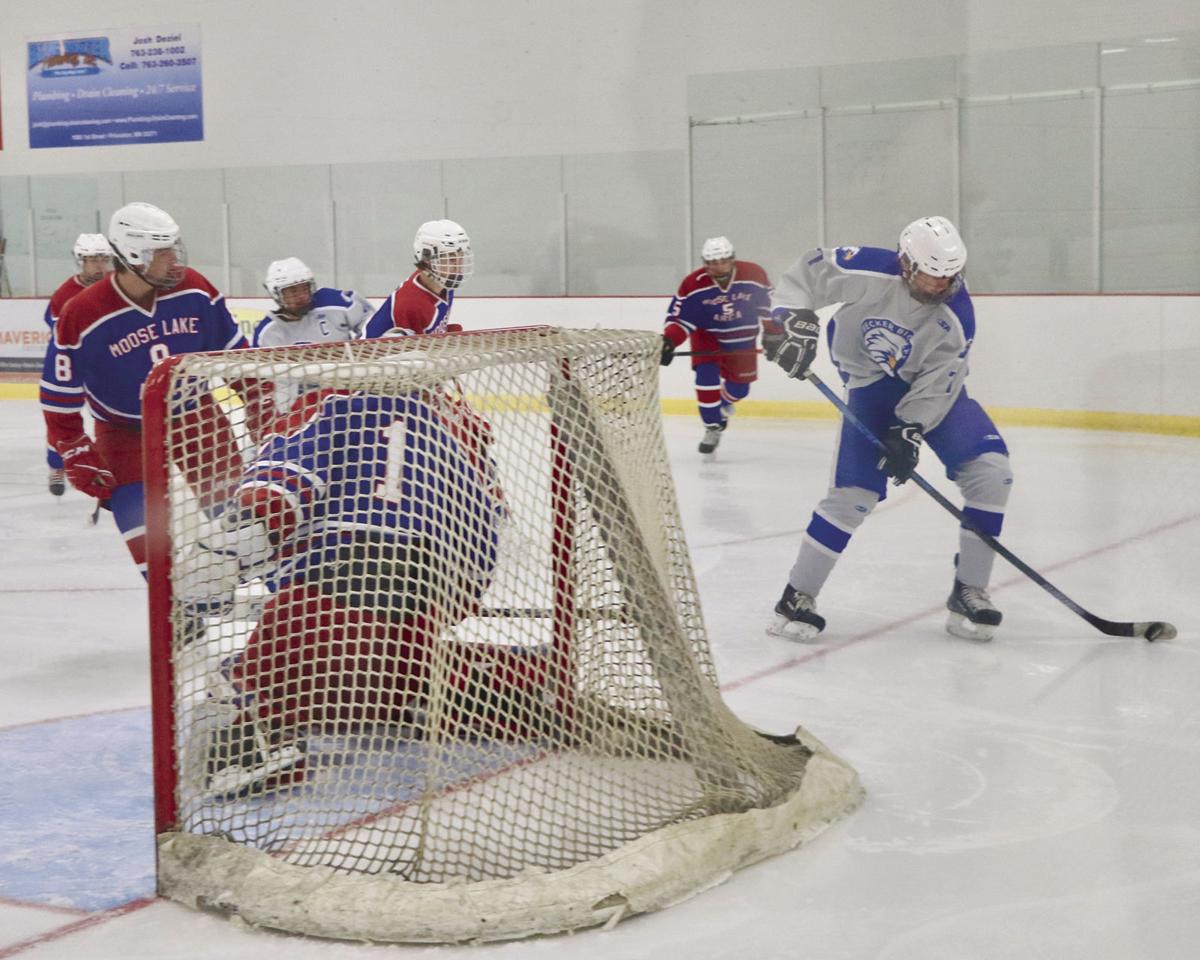 Becker-Big Lake’s Tyler Schmitt (7) looks to move the puck behind the net against Moose Lake on Tuesday, Nov. 26 at the Princeton Ice Arena. Schmitt tallied four points with a goal and three assists against the Rebels. 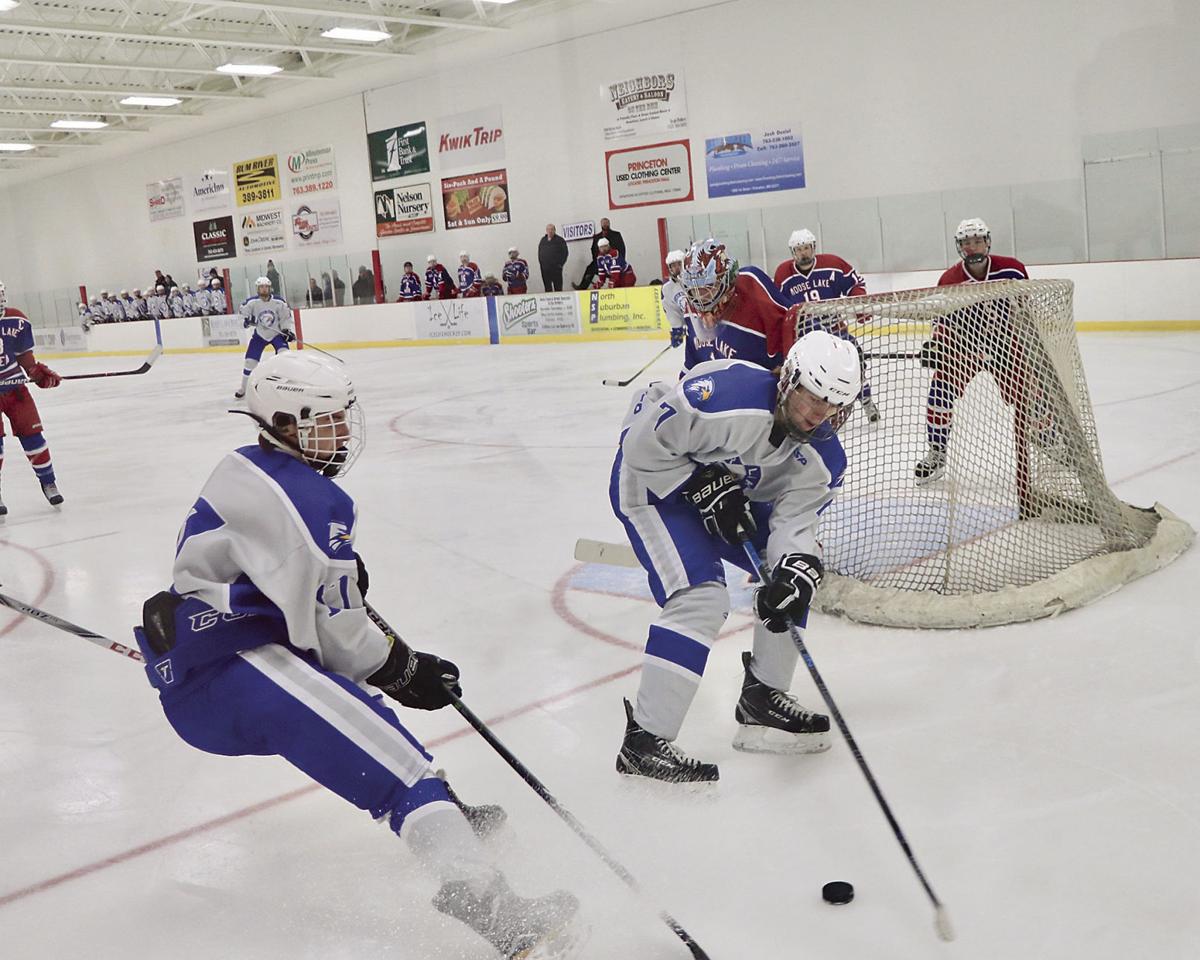 Becker-Big Lake's Ethan Tobako and Tyler Schmitt move in on the puck behind the Moose Lake net during a Nov. 26 game between the Eagles and Rebels at the Princeton Ice Arena.

Twenty-one seconds into the Nov. 26 Becker-Big Lake boys hockey game against Moose Lake, it looked like it would be a long night for the Eagles.

One minute and 29 seconds into the game, it appeared the night might be even longer.

The game between Becker-Big Lake and Moose Lake wasn’t even two minutes long and the Eagles found themselves behind 0-2.

“I’m not sure what happened there in the first minute and a half of the game,” Barzee said.

But the coach can tell you what happened in the next 30 minutes of play.

The Eagles stormed back with five straight goals en route to an 8-6 win over the Rebels in a season-opening shootout at the Princeton Ice Arena.

After falling behind by two quick goals, Barzee’s message to his team was a simple one.

“I encouraged them to keep pushing forward,” he said. “I told them not to get down, because we could still turn the game around.”

And that’s exactly what the Eagles did.

Tyler Schmitt scored the Eagle’s first goal of the 2019-20 when he took a pass from Jaden Keo at the 12:07 period of the first period and hit the net to cut the Eagle’s deficit to 2-1. Two minutes and 20 seconds later, Austin Ryberg tied the game on a goal with assists from Dillon Lindenau and Trent Rupar.

The teams were tied 2-2 after the first period.

Moose Lake scored at 13:57. The Eagles took a 6-3 lead into the break after a goal from Ethan Tobako at the 16:11 mark. Tyler Schmitt got the assist.

The Eagles were up 8-4, but Moose Lake wasn’t done scoring yet. The Eagles surrendered two more goals in the final 10 minutes of the period.

They key to the game?

“They fought hard and shot the puck,” Barzee said.

“They gave up a couple goals they didn’t want, but they never gave up,” he said.

“All three worked really hard and their effort resulted in goals,” Barzee said.

Tyler Schmitt had a four-point night after scoring one goal and tallying three assists.

The Eagles out-shot the Rebels 52-40. They also killed five-of-six power play attempts after being assessed 15 minutes in penalties. The Eagles’ Jacob Bahe scored B-BL’s only power play goal at the 9:34 mark of the third period.

Caden Weber played all 51 minutes in goal for the Eagles, making 34 saves off of the Rebels’ 40 shots on goal.

“Caden was a little disappointed, but I reminded him our goal was to come out and get the win- and we did that,” Barzee said.

The Becker-Big Lake Eagles had a 10-day break after their season opener. The Eagles return to action on Friday, Dec. 6 with a non-conference game against Winona at the Princeton Ice Arena. The first puck drops at 7 p.m.