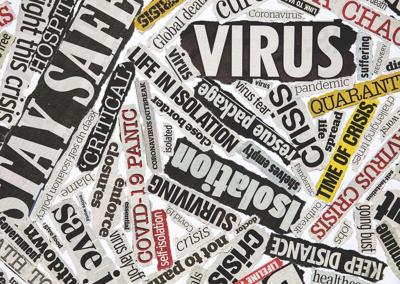 At the beginning of 2020 those three words were virtually unheard of in the Monticello and Big Lake areas.

But 12 months later, as we reach the end of 2020, those three words have impacted every life in our community.

There is no question that the top story of 2020 is the coronavirus pandemic. The virus has had an impact, from the deaths and illnesses it has caused; the closure of restaurants and bars, shops, gyms and health clubs; distance learning in our school systems; economic hardships brought on by economic challenges of closures, and efforts to slow its spread.

The pandemic was the clear-cut choice as our top story of 2020.

The first time the coronavirus made local headlines was in the first week of March when the Times featured a story on Big Lake Township residents Steve and Lynn Fuchs, who were on what was supposed to be their vacation of a lifetime. Instead, the Fuchs found themselves quarantined Grand Princess cruise ship outside of San Francisco. They were soon transferred from the ship to a going to a federal quarantine facility.

A week later, Minnesota residents were  under shelter-in-place and stay-at-home orders issued by Gov. Tim Walz.

On March 14 the Monticello Senior Center announced it was closing out of concern of infecting its patrons with the coronavirus.

On Sunday, March 15, Walz announced the closing of K-12 schools due to the virus. Schools would soon afterwards adopt a distance learning plan that would be in effect until the end of the 2019-20 school year.

On Monday, March 16, libraries, and food shelves announced the closing of their facilities. The Monticello Times and its parent company, Adams Publishing Group, ‘prohibited the public from entering its newspaper offices.

On March 17, at 5 p.m. the Governor announced dining in at any restaurants in Minnesota, as well as the operation of many other businesses where crowds of people typically gather, would no longer be possible.

Government centers reduced access to facilities and states of emergency were declared by the mayors in both Monticello and Big Lake which gave enhanced decision-making powers to city staff- in particular, city administrators.

Plans for delivering free meals to students who would normally be in school began to take shape. Meals would eventually be available for pick-up at schools and delivered by school bus drivers along regular bus routes.

People in the Monticello and Big Lake communities went out of their way to help one another. One of the most memorable and generous acts of kindness occurred when Eric Metso of Monticello and a group of his friends and family headed out to the Enfield rest area on Saturday, March 21 in the name of “Operation Thank a Trucker.” They thanked truck drivers for all they do with gifts of a fresh-grilled cheeseburger and a container of Von Hanson pretzels.

The Minnesota Department of Health on Saturday, March 21 reported the first confirmed death of a Minnesota resident due to COVID-19, the disease caused by the novel coronavirus. The death occurred March 19 in a Ramsey County resident in their 80s who recently tested positive for COVID-19 and was the contact of an earlier confirmed case.

Teachers in Monticello from Little Mountain Elementary School hosted a parade through the school’s neighborhoods on Thursday, March 26 as a means to say they missed the students, whom they never had an opportunity to say good-bye to because Monticello was on Easter break when school closings were announced and went into effect.

Masks became a normal part of the attire through Monticello, Big Lake, and Minnesota. Towards the end of March and early April, people were clamoring to get masks.

Church groups, civic groups, warm-hearted individuals and caring companies stepped up to ill the need for masks. One of those was Zach Vickers, owner of Upholstery Industries, who dedicated half of his staff to making face masks that he then offered to people free of charge. He made hundreds and hundreds of masks for local people in need.

Monticello closed its city parks to the public in early April. By mid-April, Wright County’s Trailblazer Bus Service was taking a nod from school district programs and delivering meals to senior citizens on its fleet of buses.

On April 14, employees of one of Big Lake’s largest employers are feeling the effects of the COVID-19 virus. Cargill has temporarily stopped production at its Cargill Kitchen Solutions plant in Big Lake, idling about 200 workers.

Walz announced golf courses and other methods of outdoor recreation could open to the public on Saturday, April 18.

By the end of April, summer festivals were being canceled due to the virus, including Spud Fest in Big Lake and Riverfest in Monticello.

On May 5, it was announced that Sherburne County has had its first laboratory-confirmed COVID-19 death, Sherburne County’s Community Health Services Administrator Amanda Larson reported. That came almost a month after Wright County’s first confirmed death. A week later, the first workplace-associated cluster of COVID- 19 cases was identified in Wright County.

Monticello COVID-19 cases broke the 100-case mark at the end of July and Wright County topped the 600-case mark.

Walz announced plans Wednesday, Dec. 18, to get children back into elementary schools and ease some restrictions on fitness centers and other businesses that were shuttered last month to curb the spread of COVID-19, though bars and restaurants will remain closed for indoor service through the holidays.Also on December 18, The governor updated the state’s Safe Learning Plan used by schools across the state on Wednesday to allow all elementary schools to operate in-person starting Jan. 18. Walz cited young kids’ lesser susceptibility to serious complications from COVID-19 and a better understanding by state health officials of how to mitigate spread of the virus in school buildings.