Close to three dozen people went under the clippers to support Colton Anderson on Monday, April 26 at the Big Lake Fire Station. Colton was recently diagnosed with a rare form of cancer. 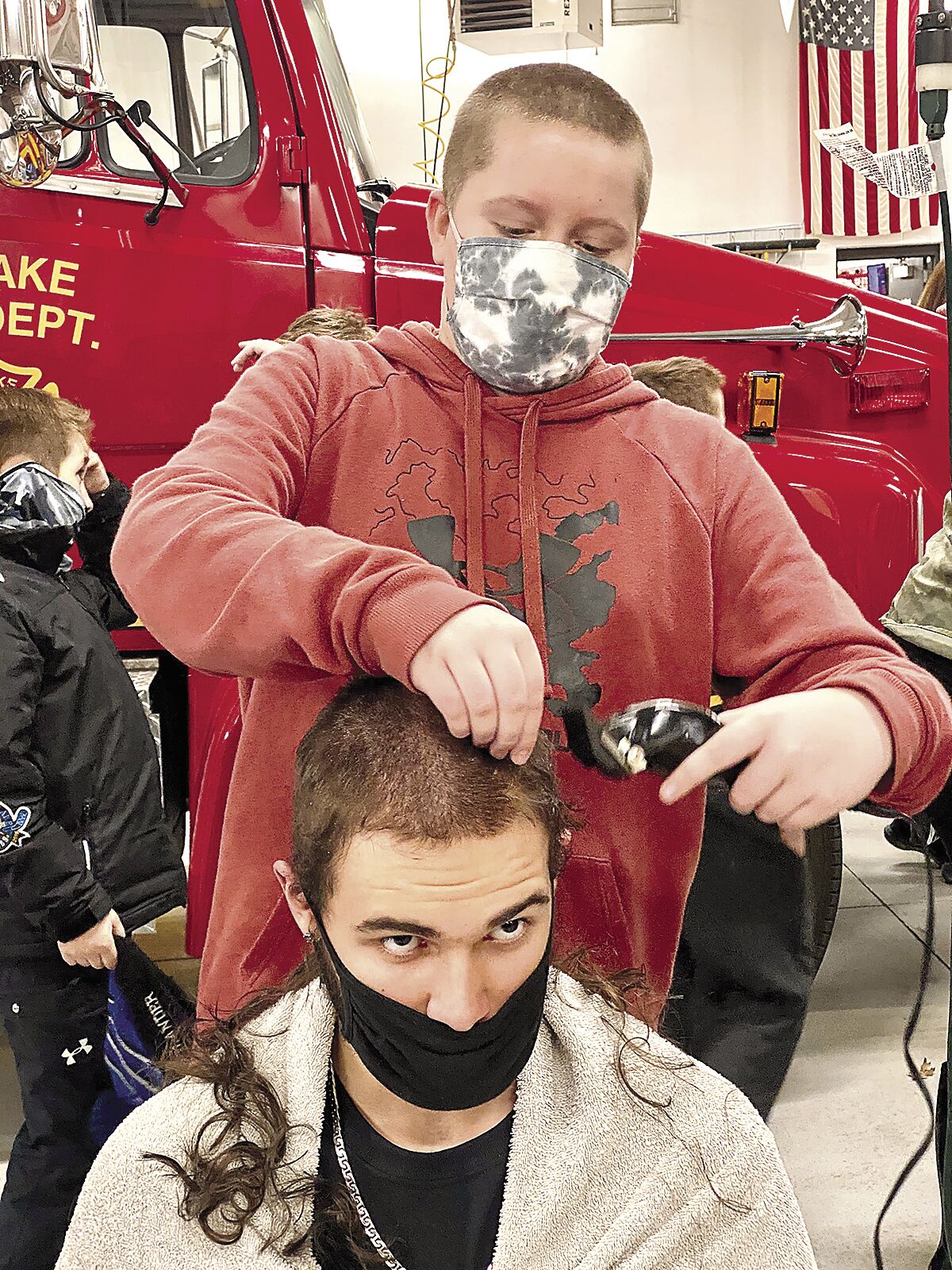 Colton Anderson, recently diagnosed with Ewing Sarcoma, cuts the hair of close family friend Lucas Evans on the night of Monday, April 26 at the Big Lake Fire Station. Dozens of friends and family members turned out to support Colton.

BIG LAKE - When it comes to being among the most supportive friends in the world, a group of Big Lake kids have made the “cut.”

On Monday, April 26, nearly three dozen friends of Colton Anderson shaved their heads to show they stand with their friend and teammate who is battling a rare form of cancer.

Colton, a 12-year-old who is a sixth grader at Big Lake Middle School, was recently diagnosed with Ewing Sarcoma, a cancer that forms in the bones or soft tissue around the bones.

Most common in children and teenagers, Ewing Sarcoma most often begins in the leg bones and in the pelvis, but it can occur in any bone, according to the Mayo Clinic. Less often, it starts in the soft tissues of the chest, abdomen, limbs or other locations, the Mayo Clinic states.

In Colton’s case, he recently noticed a bump on his arm. His parents Al and Melissa Anderson took Colton to the doctor after the boy stated that the bump was painful.

The doctor ordered an MRI, which revealed Colton had cancer. A biopsy confirmed that the cancer was malignant.

Next up is a bone biopsy and chemotherapy at the Masonic Children’s Cancer Center Minnesota, located at the University of Minnesota.

Colton knows that he will more than likely lose his hair when he begins chemotherapy. So he decided to go under the clippers for a close cut to get a step ahead of the effects of the medicine.

When Colton’s friends on his Hornets youth football team heard the news, they lined up to go under the clippers, too. Coaches, family friends, and other supports lined up, too.

She mentioned Colton’s plans for a haircut to some of his football coaches- and they helped mobilize the teammates to turn out and support their friend.

“It just warped into this,” Spaeth said as she looked at a fire station full of people.

Lucas Evans of Clearwater has known the Anderson family for most of his life and considers them his extended family.

Before Monday, April 26, Lucas had a great head of black hair. But five days before his prom at Annandale High School, he had his locks shaved off.

“I’ll do whatever I can for Colton, even with prom a few days away,” Lucas said. “He’s like a little brother to me.”

Lucas says it hurt when he learned about Colton’s cancer diagnosis. So supporting Colton by shaving his head was important to Lucas.

“Besides, hair grows back,” he said.

Big Lake High School seniors Aiden Miller, Jake Wesley, and Tyler Beach are members of the Big Lake High School football team. They didn’t get their heads shaved, but wanted to be on hand to support a member of the Hornet football brotherhood. “I saw it on Facebook,” Aiden said. “We got dressed in our football uniforms and came down to support him.”

So did about three dozen of Colton’s football teammates who turned out to get their hair cut in their gold and black youth football jerseys.

Colton said he was happy people came out to the fire station on Monday, April 26.

“It touches my heart that people would do this for me,” the 12-year-old said shortly after having his own hair clipped while his friends, family, and supporters looked on.

And while the Anderson family was caught off guard by Colton’s cancer diagnosis, the boy has maintained a great attitude, Melissa Anderson says, and the family is it counting on a good prognosis.

Colton’s experience with Ewing Sarcoma will likely be a life-long journey, his mother says.

The next nine months will be filled with chemotherapy, a host of medications, surgery and possibly radiation.

“But if the cancer is localized and not in the bone, the prognosis is for a long, healthy life,” Melissa Anderson said.