Twenty-eight months after breaking ground on its new fire station, the Monticello Fire Department cut the ribbon on its state-of-the-art facility.

While the fire department moved into its new facility in 2020, the COVID-19 pandemic kept the department from celebrating the achievement until Friday, Sept. 17.

City leaders joined firefighters, local dignitaries, and representatives of the architect and engineering firms that worked on the station were on hand at the Chelsea Road station.

Monticello Mayor Lloyd Hilgart reflected on the origins of the project.

“It was a long project,” Hilgart said.

The project didn’t start as a quest for a new fire station, Hilgart recalled.

“We started looking at remodeling the old station (near the community center on Sixth Street W.),” Hilgart said.

But city officials were having trouble with making the financing work.

That’s when the idea of a new station was floated.

“We crunched the numbers, and it was not significantly more than remodeling the existing station,” he said.

A site was chosen on a piece of city-owned property on Chelsea Road, just east of the indoor soccer facility.

State Representative Marion O’Neill (R-Maple Lake) recalled how she and Sen. Bruce Anderson went to bat for the fire station in seeking a sales tax exemption at the State Legislature.

The measure, O’Neill said, was successful and saved Monticello $120,000 in sales tax related to the construction project.

Anderson, who was also on location for the dedication, said he was proud to have been able to have a role in the fire station project.

Corey Brunton, of Brunton Architects and Engineers, noted that projects like the Monticello Fire Station do not happen without a high level of local collaboration.

“This facility is a testament to the community, fire department, and city council,” Brunton said.

“The best projects are the ones that have everyone’s fingerprints on it,” he added.

Brunton said the Monticello Fire Station is second to none. To hit that point home, he noted that the station won a national award, taking third place for its design.

The work has paid off with a new level of efficiency within the fire department.

“Our response times have improved and the location has been fantastic,” Mossey said.

“We do our job much better than before...and more safely,” he said. 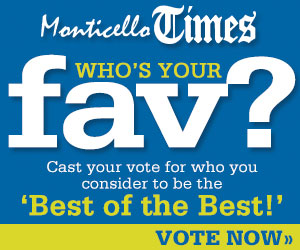