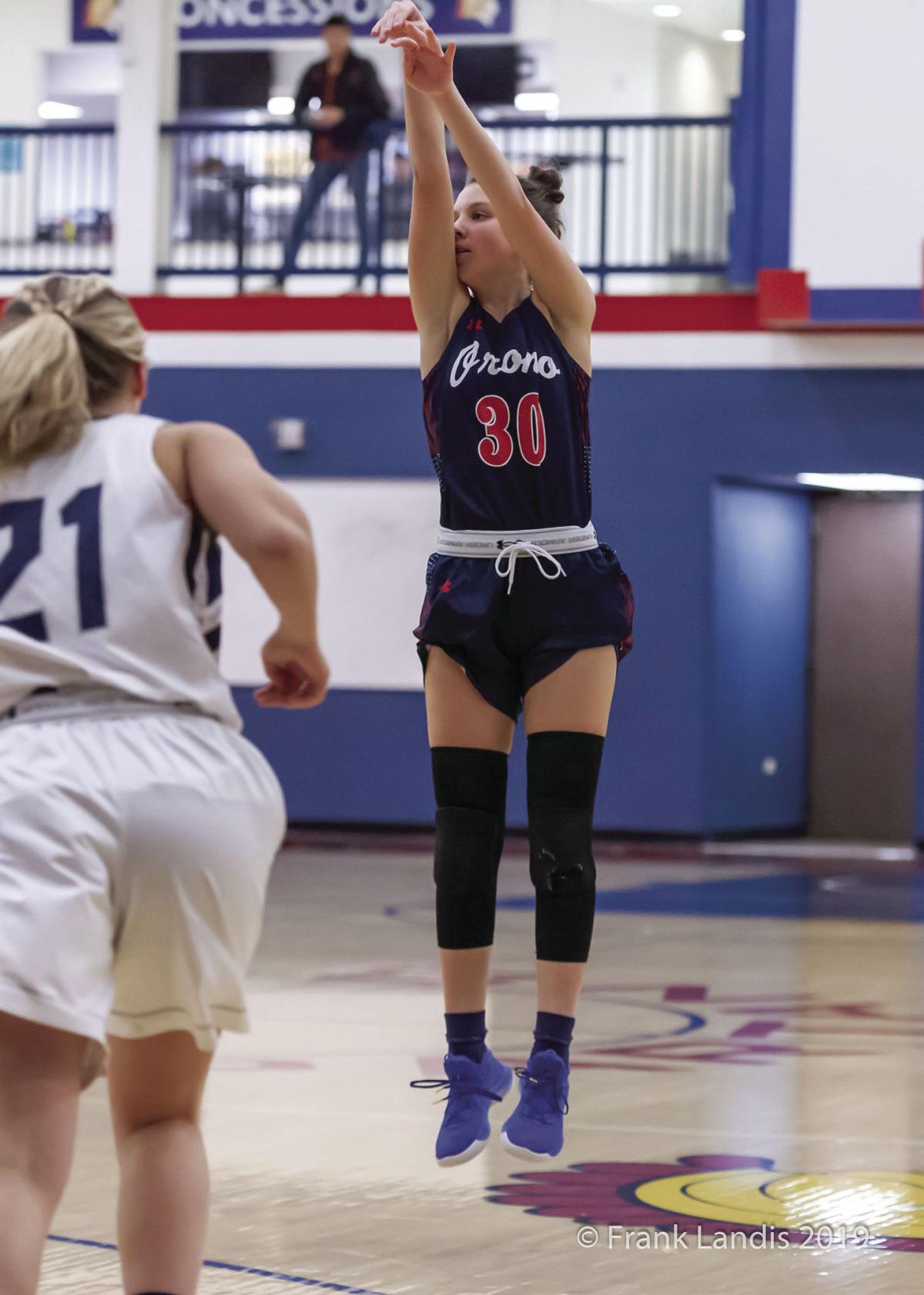 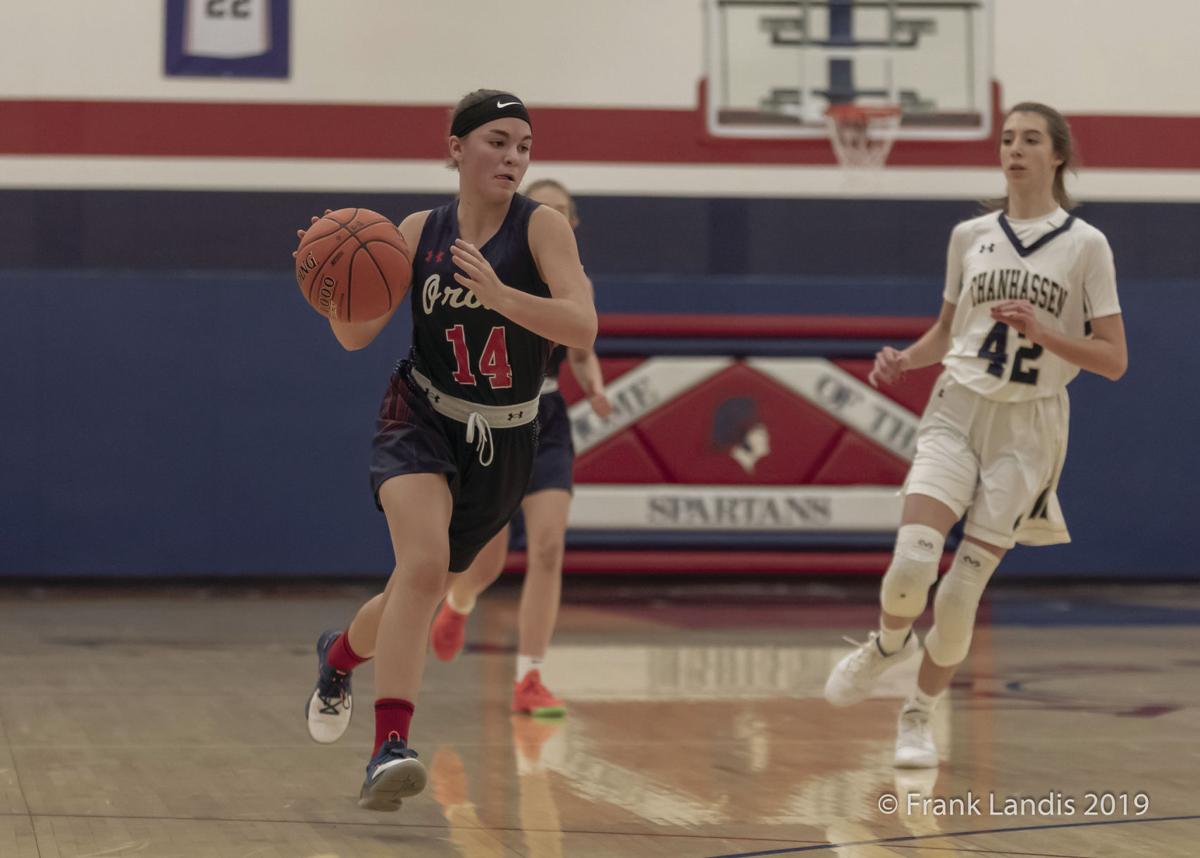 The Orono girls basketball team traveled to Monticello High School on Friday, Dec. 27 to play the Vikings of North Branch High School. The Vikings came into the game with a 7-1 record, led by Paige Peasley averaging 16 points and 10 rebounds per game. Orono has been playing solid basketball to date, coming into the game averaging 66 points per game, following a solid performance against a top team in The Academy of Holy Angels.

The game started out slow for the Spartans. Poor shooting and turnovers by the Spartans resulted in a deficit of 12-4 at the midpoint of the first half. With the insertion of sophomore shooting guard, Eliza Mckown, with Julia Knudson and Haley Paulson on the floor, the Lady Spartans finally started to see the ball go through the net. Eliza Mckown hit two 3-pointers, Paulson a 3, and a couple of nice drives by Knudson helped to close the gap. A final steal and layup by Lauren Knudson at the end of the half sent the Spartans to the locker room behind 23-17.

The Orono girls came out of halftime with renewed focus. Although North Branch hit the first basket of the half, Orono took charge thereafter. Good ball movement and shooting by the Orono tandem of Julia Knudson and Haley Paulson got the Spartans going. Paulson started the scoring with a three from the wing. Knudson followed with two consecutive threes from the right corner. Amelia Singleton made a 3-point play to give the Spartans their first lead of the game at 29-27 with 15:30 to play. All of the Orono starters contributed during the initial stretch with Elle Johnson controlling the rebounds and contributing four points as well. By the 12:30 mark, the team had built a 40-30 lead and turned the next stretch over to freshman Kayla Kallenbach and Lauren Knudson. The defensive tenacity and anticipation by the freshman guards proved too much for North Branch. Four steals and multiple buckets later, Orono had extended its lead to 51-33.

Orono pushed the pace and shared the ball well over the course of the second half. What began as an incredibly poor shooting day, ended with the Spartans shooting 40 percent from the floor and tallying 11 assists.

The Lady Spartans came away with a 65-37 victory.

Paige Peasley was again the leading scorer for the Vikings with 14 points.

Orono was led in scoring by Julia Knudson with 15 points. Haley Paulson added 13 points. Elle Johnson had a strong day in the paint for the Spartans scoring six points and pulling down six rebounds. Lauren Knudson contributed three steals and nine points on the day.

The Lady Spartans came out playing full court man defense and pushing the pace. They got out to a quick 8-2 lead behind two 3-point baskets from Eliza Mckown. The Spartan defense overwhelmed the Vikings throughout the game. Good ball pressure and ball movement put the Spartans ahead 32-11 at the half. Eliza Mckown led the team with five 3-pointers by halftime.

Orono’s hot shooting continued throughout the game resulting in a lopsided win 61-20. The game was highlighted by the long range accuracy of Mckown. She ended the game with six 3-point shots and finished with 26 points, four rebounds and two steals on the game. Mckenna Valene added three more long range makes.

Grace Knooihuizen was very active on the defensive end using her length and speed to pressure the ball and frustrate the North Branch perimeter players. Knooihuizen ended the game with six steals.