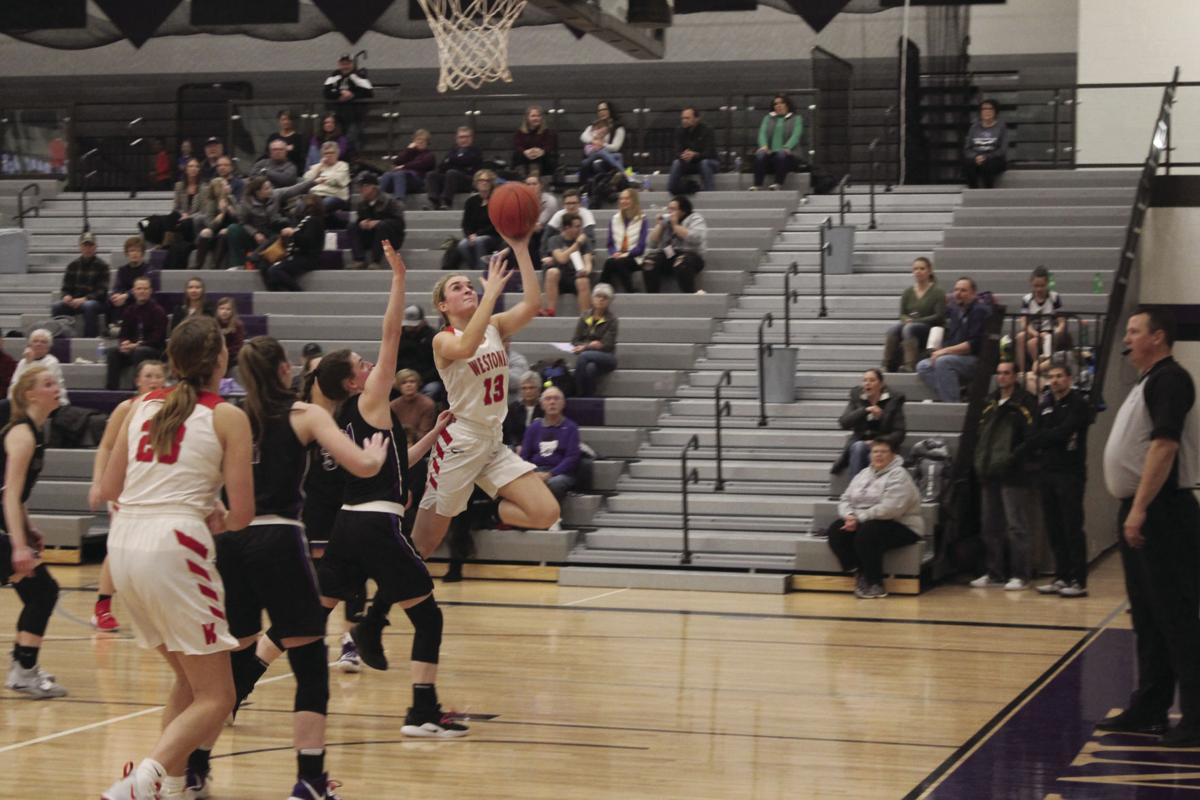 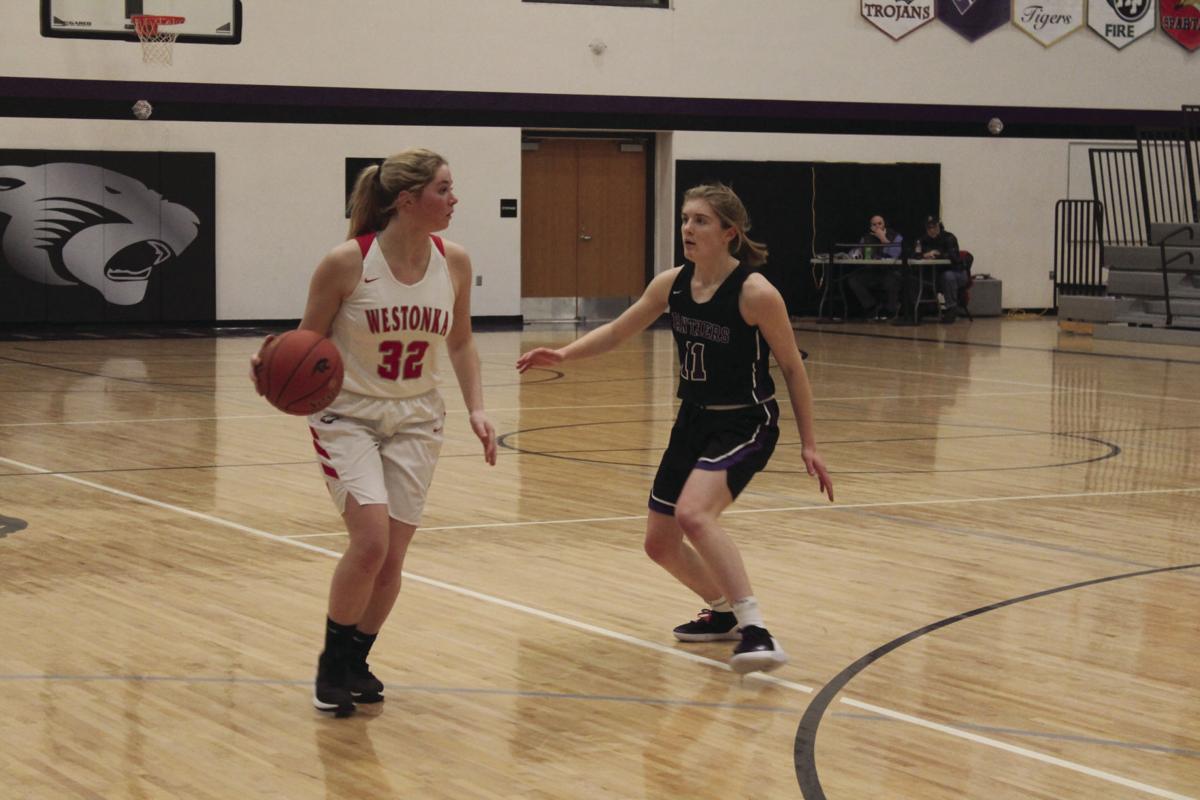 The Mound Westonka Girls’ Basketball Team hosted the Annandale Cardinals on Tuesday, Feb. 11 in a Wright County West Conference match-up. The game was a game of “quarters” with the White Hawks holding tough in the first and making a huge comeback in the fourth, but the Cardinals proved too much to overcome in the second and third.

It was a back-and-forth battle early with the game tied at 16 with 5:30 to go in the first half. The Cardinals finished the first half on a 25-1 run taking a 41-17 lead into halftime. Sophomore Megan Wanner led the White Hawks in scoring with 7 points at the break.

The second half was a slugfest early with the Cardinals holding a big 53-27 advantage at the 7:57 mark. Then Junior Sydney Eidsness grabbed a loose ball and lobbed a pass to Otto, who finished with a breakaway layup, sparking the comeback. A little later Eidsness hit a 3 from the right wing, cutting the score to 53-36. Eidsness added a free throw and then Hollins hit a 3 from the right corner. Wanner stole the subsequent inbound pass and was fouled on the layup, making both free throws and cutting the lead to 53-42 with 3:55 left. After the Cardinals ran some clock and made a basket, Wanner hit a post-up shot next time down and then with under 2 minutes left, Otto buried a 3 and junior Greta Blanck drained her third triple of the game with 58 seconds left, cutting the lead to 7 at 57-50.

The Cardinals added a free throw and then Wanner was fouled again driving to the basket, making the free throws and taking the lead down to 6 at the 31 second mark. The Cardinals made one of two free throws after a quick defensive foul and with the score 59-52 and 21 seconds left, Wanner and Drill executed a beautiful pass-and-screen for a Drill layup that would have cut the lead to 5, but an untimely foul call negated the basket and the Cardinals won the free throw shoot-out down the stretch to leave town with a 62-52 win.

Wanner had a game high of 17 points, including nine of 10 at the free throw line. Blanck finished with 9 points, making good on three of five 3-point attempts. Drill and Otto each finished with 7 points and led in rebounds with five apiece.

Next up for the White Hawks was a home game against the Chargers from Dassel-Cokato on Friday night, Feb. 14 in another Wright County West matchup. The White Hawks were still searching for their first conference win of the season and a Valentine’s Day game would not disappoint.

The White Hawks built a 10-point lead at the midway point of the first half at 14-4 and were in control for the rest of the game. Sophomore Wanner scored 7 points and freshman Alicia Hatlestad added 6, and the White Hawks led 21- 12 at the halftime break.

The Chargers made a couple of free throws at the 16:05 mark in the second half, cutting the lead to 21-14, but on the next three possessions senior Melissa Drill kicked passes out to Wanner, who drained three consecutive triples, sending the White Hawks on a quick 9-2 run to extend the lead out to 30-16 with 13:25 remaining. The next 10 minutes saw the two teams exchanging baskets and the Chargers hit a 3 with just under 5 minutes left, cutting the lead back under 10 at 42-33. The Chargers made a couple more runs late, but the White Hawks went 13 of 16 at the free throw line down the stretch to secure their first conference win of the season 55-41.

Coach Heibert’s thoughts on the season thus far: “We’ve got a lot of hard-working girls on this team. They have approached games with the right attitude and work ethic. I’m proud of them as a group and it was satisfying to get a win versus Dassel-Cokato.”

The White Hawks travelled to Dassel-Cokato in the return fixture with the Chargers on Saturday evening. The Chargers returned the favor to the White Hawks from the previous night as they built an early lead, dealt with a second half comeback and held on for the home court victory.

The Chargers raced out to a 19-5 lead with 5:16 left in the first half. Cold shooting, turnover and fouls hurt the White Hawks all game and they trailed 26-13 at halftime. The White Hawks chipped away at the lead early in the second half, cutting it to 5 at the 12:46 mark. A few minutes later, trailing 29-22, senior Taylor Hollins drained four 3-pointers in a row and the White Hawks went on a quick 12-7 run, cutting the lead to 36-34 at the 7-minute mark. The White Hawks shooting went cold again, the turnover bug reappeared and the Chargers finished off the game with a 54-41 win.

Hollins finished with a team high and season high of 12 points on four of six shooting, all from 3-pointers. Melissa Drill added 9 and Sophomore Wanner chipped in 7 points. Drill pulled down 10 rebounds while Wanner and Sam Otto added 5 each. Sidney Eidsness and Drill each added three assists.