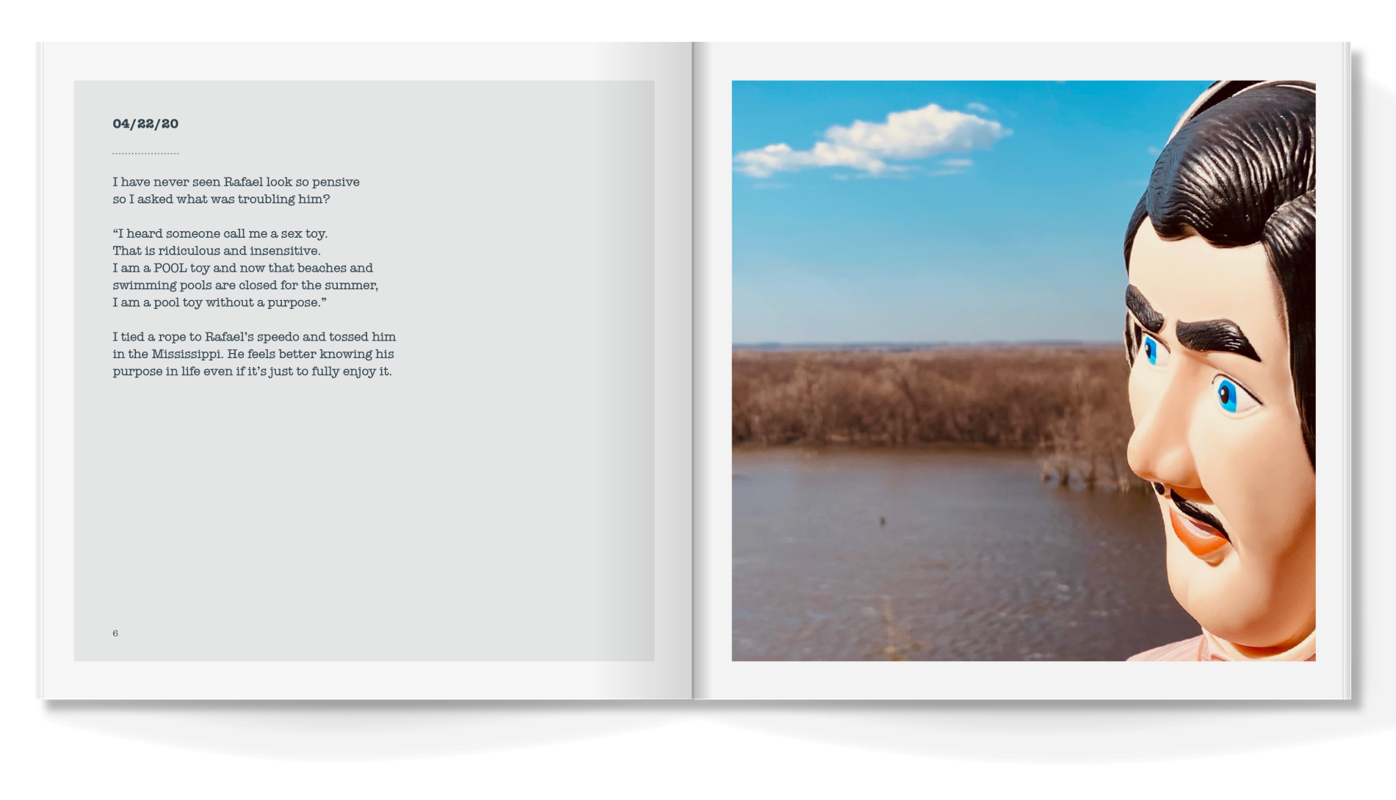 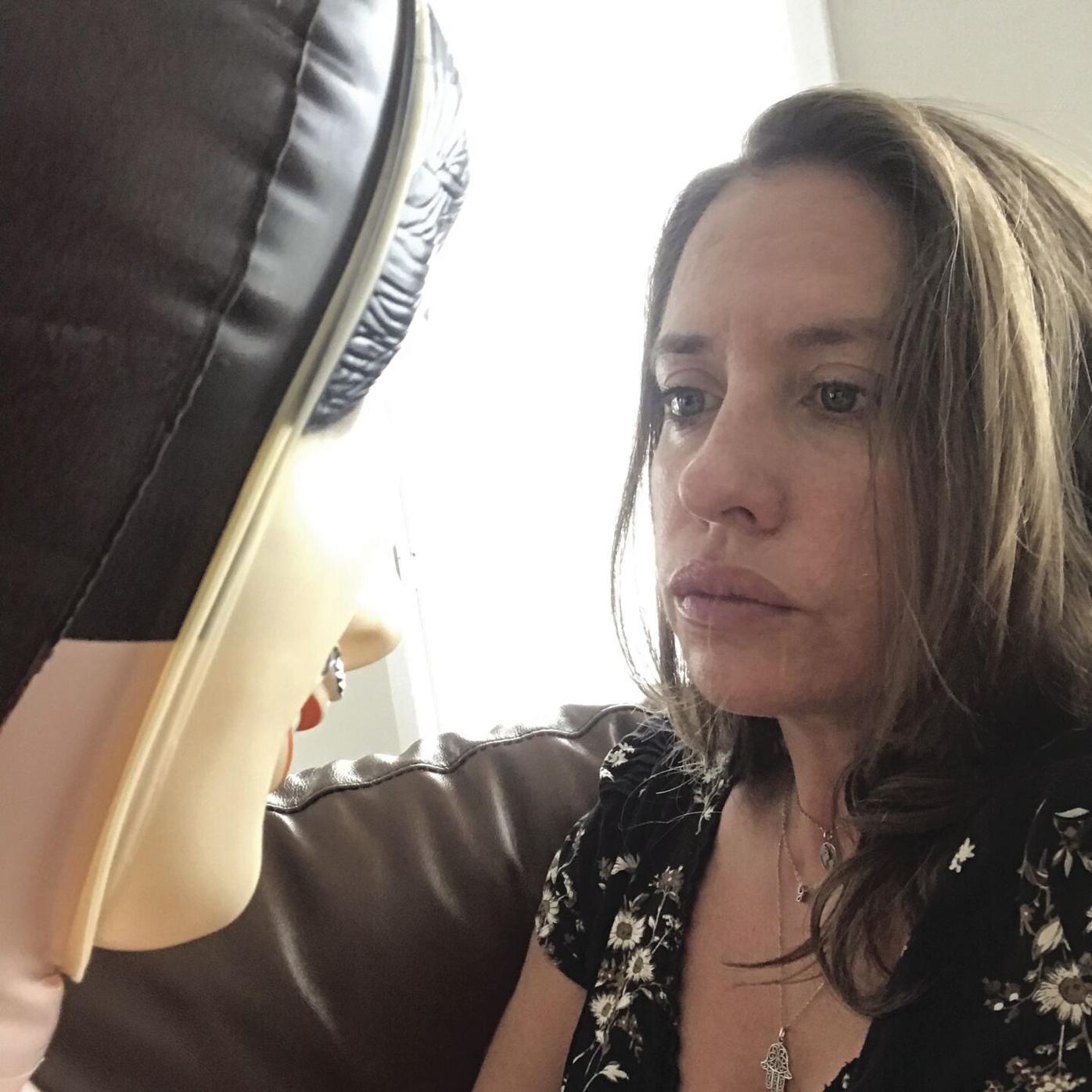 He’s a POOL toy. A pool toy without a purpose, he says, because the pools and beaches are closed. Rafael may have more of a purpose than he knows, however.

Rafael has already contributed $440 to medical research, given Mound Westonka alum Gina Hessburg a quarantine companion and produced many a chuckle besides.

What began as a tongue in cheek love story on Instagram resulted in a pink square coffee table book titled Blowing Up Rafael, released last month and benefiting research of the demyelinating autoimmune disease Optic Neuritis (ON).

Back it up. Back it up to pre-Rafael, to January 2017 and the remote Nicaraguan island where it all began.

Hessburg was on a surf trip to Little Corn Island, not exactly ideal for having a medical emergency: the nearest doctor was on the mainland. The headache was more than hangover, she said. And then there was the clouded vision in her right eye. Unable to get an immediate flight back home, Hessburg learned while still in Nicaragua that it wasn’t her retina detaching but her optic nerve that was inflamed.

It was the start of what was going to be a grueling several months of treatment that included two spinal taps, a blood patch and months weaning off the initial days of high-dose Prednisone—only for her to then experience three more attacks of ON, an additional two spinal taps and an increasingly difficult time with the mental and physical side effects of Prednisone.

Optic Neuritis, when it happens, often flares up from other diseases, like Multiple Sclerosis (MS), but for Hessburg it remains undiagnosed just as her prognosis remains uncertain. The attacks have alternated between the right and left eye, and as far as Hessburg and her doctors can tell, the only common denominator with each attack has been stress.

Rafael has been with Hessburg during the course of her two most recent attacks. It was a series that began not long after she caught one of the last flights out of Morocco at beginning of the COVID-19 pandemic.

Not long thereafter, and this following a surprise long-term improvement in the initial inflammation of her right eye, the third attack hit her. This time, the side effects of the Prednisone also hit hard.

“Each course I’ve had, the physical and mental side effects have been more debilitating and much more severe, and to me that’s an indication my body’s rejecting it,” she said, remembering what she felt as “pinballs” going off inside of her and a “radiating energy that doesn’t stop.”

At the time, Hessburg was living in a neighborhood of Minneapolis that was, as she put it, “active,” after the George Floyd incident. She was also going through a relocation following a negative experience at her old condo.

“I had these conflicting forces, unable to rest,” she said, detailing also the insomnia and heavy depression that came alongside her treatment and the anxiety of living through a little understood condition while an even less understood virus gripped the world—how do you process that?

“I blew him up and I put him at the kitchen table, like this, and I put a cup of coffee in front of him and I did a post” Hessburg says. Rafael is wearing a red check today, dressier—and warmer; it is February—than his usual Speedo.

“I did a post, really just empathizing with what everybody was feeling, with being scared and the uncertainty of the future, what was going on with our health,” she says.

Those first clever postings to Instagram quickly had Rafael taking over her account. “People were directly connecting to it. He’s never gotten a ton of likes but he gets a lot of messages. People sort of fell in love with him; he became real to them, so I had to keep it going.”

The release of Blowing Up Rafael last month was a close collaboration with one of Hessburg’s long-standing clients, Minneapolis-based Little & Company (Hessburg does freelance marketing for ad agencies and creatives).

From that first coffee-cup-and-kitchen-table posting, Hessburg says she “took the best of the best and let the story originate from where it started.”

Which means that Rafael’s followers will see in hardcover form the life they helped to create.

“They helped me form his personality based on how they were responding to [the posts],” says Hessburg. “It’s all my existential crises and feelings and concerns but through his personality that developed because of what people were playing off of.”

The release of Blowing Up Rafael doesn’t mean his story will now deflate. The “non-traditional mascot” will still have a presence on Instagram, said Hessburg.

But her focus is also evolving.

Four years with ON, and especially her first experience in navigating the healthcare system, has brough patient advocacy top of mind.

“In hindsight, I wasn’t aware enough to advocate for myself,” she said. “It took me some time to learn that if you don’t feel like a doctor is giving you the kind of care that you want or isn’t working with you in the way you want that it’s okay to talk to other doctors or to push back.”

For the immediate future, though, Hessburg said she’s regaining her health with naturopathy and EMDR (Eye Movement Desensitization and Reprocessing), “creating new pathways and clearing out the bad ones so I don’t have an exaggerated fight or flight response.”

Blowing Up Rafael by Gina Hessburg (Little & Company, 216 pages) can be purchased for $45 at blowinguprafael.com. A $5 donation from all book sales goes toward Optic Neuritis research and patient support. More information about Gina, ON and the benefitting organizations can also be found on the website.