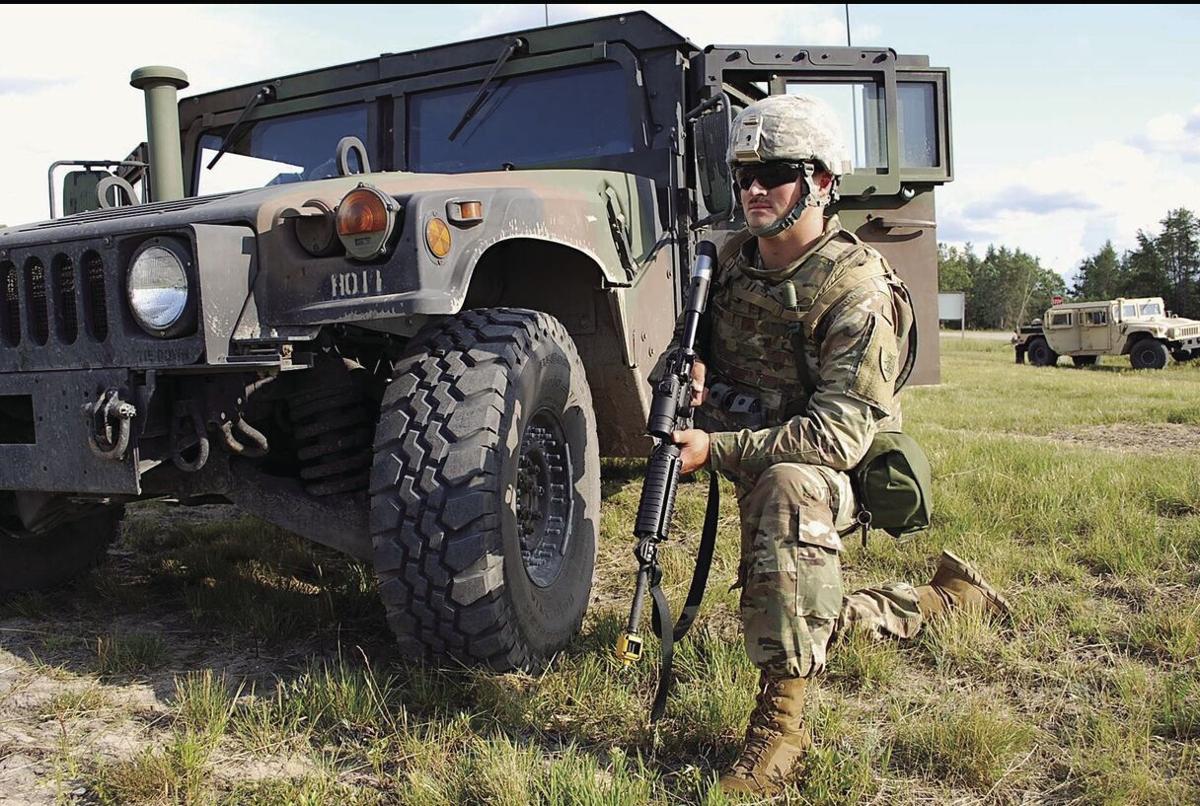 Owen Young of Minnetrista signed up with the Army National Guard after graduating from Westonka High School in 2016. He served as lead driver in his convoy during training at Michigan’s Camp Grayling, where he also earned the Army Achievement Medal. (Submitted photo) 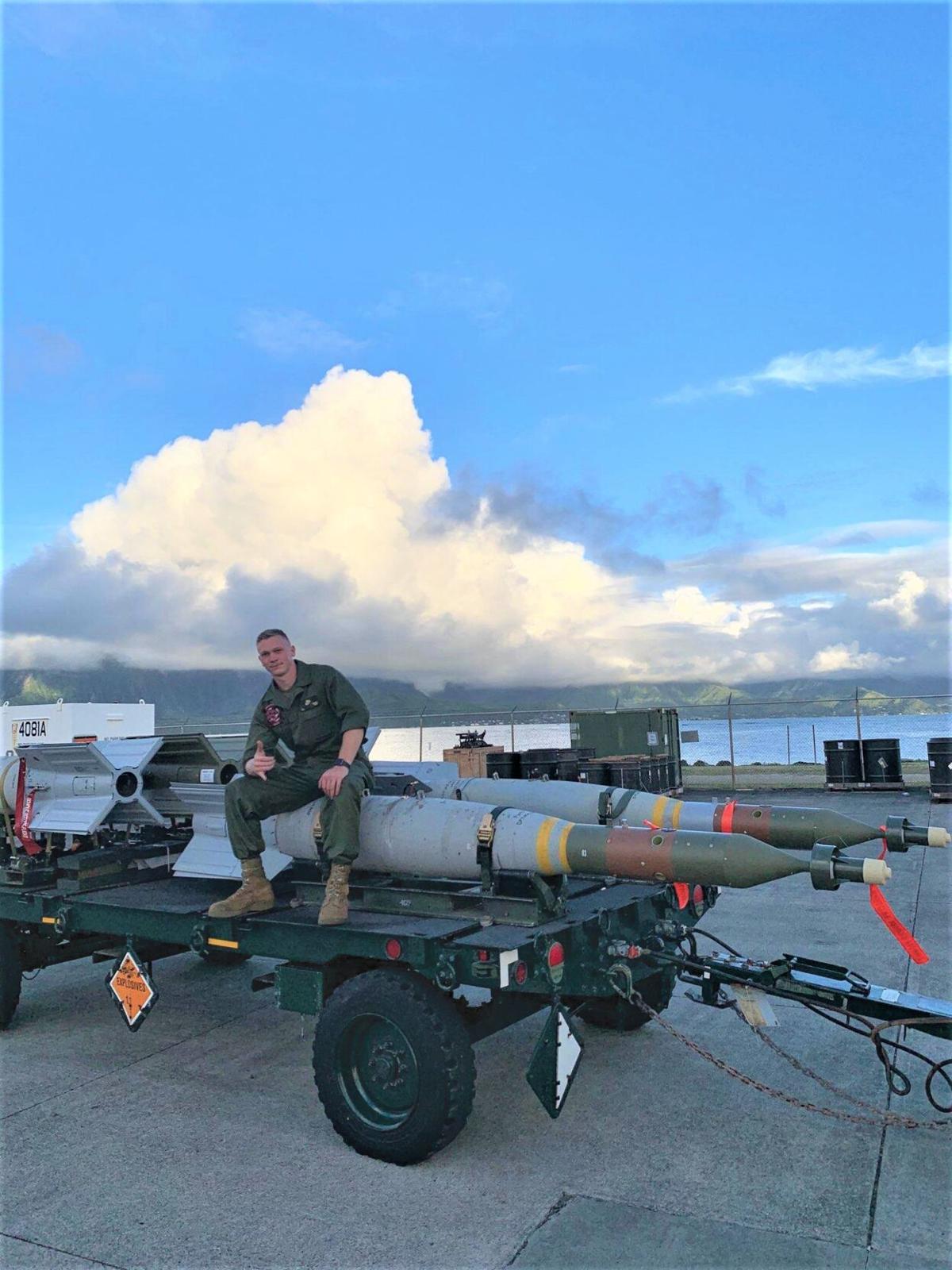 Ian Rostis of Mound enlisted in the Marines in part for the travel opportunities that enlistment offered. He’s been to Japan and Hawaii (pictured) during his service so far and credits his wife, Kelsi, with giving him encouragement along the way. He is also taking credits in cybersecurity and is now nearing graduation from the University of Arizona. (Submitted photo)

Owen Young of Minnetrista signed up with the Army National Guard after graduating from Westonka High School in 2016. He served as lead driver in his convoy during training at Michigan’s Camp Grayling, where he also earned the Army Achievement Medal. (Submitted photo)

Ian Rostis of Mound enlisted in the Marines in part for the travel opportunities that enlistment offered. He’s been to Japan and Hawaii (pictured) during his service so far and credits his wife, Kelsi, with giving him encouragement along the way. He is also taking credits in cybersecurity and is now nearing graduation from the University of Arizona. (Submitted photo)

Sgt. Charles Johnson, station commander for the U.S. Marine Corps. (U.S.M.C.) recruiting station in Buffalo, estimated that “a solid 7 percent” of people in the Westonka and Orono area would be able to meet the mental and physical benchmarks required by the Marines.

Recruitment in Minnesota has not generally been a big ask, said Johnson. There is a high propensity here to enlist, due in large part to what Johnson said he sees as a sense of patriotism and respect for the service. “Minnesota as a whole is a very military-friendly state,” he said.

For many who enlist, the intangible skills learned are what have left the most lasting impact.

“The Army teaches you how to be flexible,” said Owen Young.

Young, from Minnetrista, had enlisted in the Army National Guard following his 2016 graduation from Westonka High School. He said his main work so far has been in mechanics, working on generators in the field, but that this knowledge will be easily transferable to civilian life.

Young also credited his high school football and baseball coaches with giving him a firm foundation on which to build in leadership and initiative.

That woldn’t surprise the Marines’ Johnson. “We rely heavily on 18- and 19-year-olds to lead Marines, no matter if they’re deployed or here in the United States—we’re giving an 18- or 19-year-old power over a certain number of individuals.”

Or what might be millions of dollars in explosives and a pilot’s life besides.

Ian Rostis is a 2017 Westonka graduate who found himself in aviation ordnance for the Marines’ F-18 aircraft, building bombs and working on the fighter jets’ gun systems.

“That’s millions of dollars worth of hardware, and then that’s got to go on a jet—in a way you kind of have the pilot’s life in your hands, too, because if something you do is wrong you could potentially down an aircraft,” said Rostis. “It’s a big responsibility that you kind of have to step up to the plate and take on.”

Rostis had started college prior to enlisting, taking credits at Mankato State. “That’s kind of the track that most everybody thinks is for them,” he said. But Rostis said he soon found the college track wasn’t the route for him at the time and the travel opportunities with the Marines appealed to him. He’s since been to Japan and Hawaii.

But certain misconceptions about joining the military, no matter which branch, do still exist here.

“For the Marines, the biggest misconception is that we only have combat-related jobs,” said Johnson, who said that even as every Marine is a rifleman, the Corps. offers 350 jobs that “range from administrative to mechanics and, yes, combat as well.”

Many people also still view the military as “a step down from college,” added Cpl. Jack Howell, who works with Johnson at the Buffalo station. But a University of Northern Iowa study published in 2018 revealed that a higher percentage of service members had completed high school than did those in the U.S. population as a whole (99 percent compared to 75 percent), putting them in a better position for seeking a college degree, whether during or after their service.

Johnson said the current COVID-19 pandemic has been by far the biggest barrier to recruitment. Few schools are now permitting any outside visitors on their premises, and sometimes the only option has been to take over a class via Zoom. A handful of schools have been more lenient: Johnson said that some from his station had been at Hutchinson earlier this month and if not quite the normal experience, it was one that at least came closer to it.

“We bring our pullup bars in; we let the kids do pullups. We tell them to stay 6 feet apart, we bring Lysol wipes, we bring spray, we’ve got two different cups for sanitized and un-sanitized pens.” Usually schools have been more receptive if they’re aware of the precautions that his recruiters take, he said.

Even prior to COVID-19, though, the service has been tailoring its message for online platforms “from LinkedIn to Snapchat to Instagram to Facebook,” said Johnson. A banner that hangs draped on the wall behind him shows the markings of this digital-driven campaign: a narrow white search bar stands out as invitation to find the U.S.M.C. online.

The focus now is also much less one of trying to sell the Corps. and much more one that is centered on the benefits offered those who enlist—particularly that promise of a college education.

“Everybody wants a college education, but the generation now is so willing to go into astronomical debt,” said Johnson, who was able to avoid that debt by joining the service.

Johnson urged high school seniors to take take the ASVAB (Armed Services Vocational Aptitude Battery), regardless of whether they intended to enlist. “The whole purpose of [the ASVAB] is to see what you’re good at,” he said, comparing it to the ACT or SAT, only more targeted. “It’s not just math, science, history—it goes into mechanics as well. It goes into engineering. Something that you’re not even thinking of could be something that you’re good at.”

“Don’t write it off. Don’t be afraid to give [the military] a chance because there’s a lot of programs where you can still get an education and do this,” said Rostis, the Marine from Mound. Rostis said he is now nearing graduation after continuing on a cybersecurity track at the University of Arizona.

Said Minnetrista’s Young, “Trust your instincts. Go in there and get the information you’re curious about.”