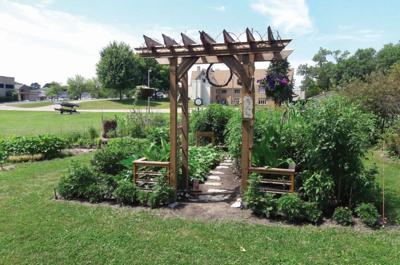 While we may be wary of calling it spring, the Mound GROW (Giving Roots Of Westonka) Garden at Bethel United Methodist Church is embracing the season and now accepting applications for plots in this approximately 9,000 square foot community garden. Interested individuals can rent plots to grow vegetables for themselves, or they can take part in the Giving Garden and grow produce to donate.

“One of our focuses is we have a Giving Garden, which that alone, I figured out roughly the square footage is about 1,800 square feet,” shares Jeanette Kraemer, a volunteer for GROW Garden. “And one of our gardeners, Tammy Pearson, takes care of that garden and almost all of it, maybe 90% gets donated to WeCAN and some of the lower income apartment buildings around the community. There’s some other gardeners too who like to give back to the community that way.”

GROW Garden is designed to provide community members with a great location for gardening and to meet some fellow green thumbed neighbors. For Kraemer, it’s all about connecting with the earth and experiencing for herself where her food comes from, beyond the shelves in a grocery store. “The other thing, I think it just allows another way for people to have a sense of community and to connect with nature and to grow their own food, you know people really like that,” says Kraemer. “And some are families and they have an opportunity to teach their children about nature and where food comes from versus you just go to the grocery store and pick it out.”

While the GROW Garden may be varying distances from gardeners’ homes, some gardeners find that they need the extra space, and for Kraemer the drive is always worth it. “I’ve been with the garden since the beginning, which was in 2011,” says Kraemer. “I grew up on a farm west of the cities, near Saint Cloud, so I really, really enjoy giving back to nature and the earth and digging in the soil, and it’s just really, really rewarding for me. I’m two miles from the garden. When I first joined I wondered if that would be too far because you know how everyone has such busy lives. I said when you’re going to something you love it doesn’t seem like it’s too far.”

GROW Garden is located at Bethel United Methodist Church, but gardeners do not have to be a part of the church to participate. In fact only a small percentage of participants are also parishoners. The only requirement to be a GROW gardener is that participants live in Mound, with some exceptions made for neighboring areas such as Minnetrista.

In the summer gardeners can also look forward to a GROW Garden barbecue/potluck where all gardeners get an official chance to meet one another and taste eachother’s produce. “One of the social things that we like to do, speaking of tradition, is to have a midsummer barbeque with all the gardeners and again it’s just another time for community,” says Kraemer. “It’s a nice time for people to take a break from busy lives.”

Kraemer concludes with a thank you to the church for allowing GROW Gardens to use their land. “I just want to say too it would be really great if you could just give a shout out to the church because it’s through their generosity that they allow us to use their land and they’ve just been really supportive and great about all the different projects that have come up throughout the year that help the garden run better,” says Kraemer.