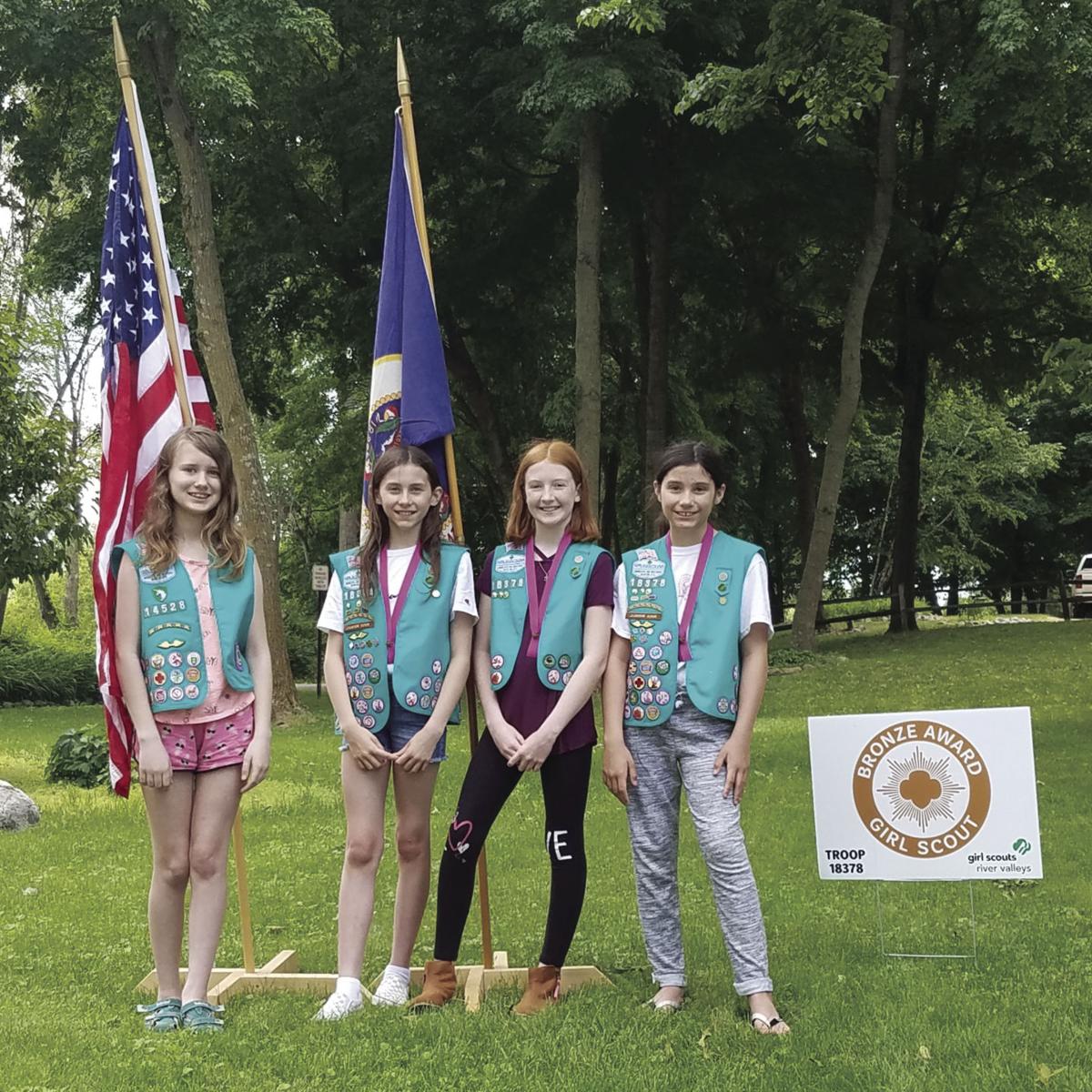 The Girl Scouts in Troop #18378 earned their Bronze Award for digitizing the map at Fairview Cemetery in Mound. Pictured here are, left to right, Kaitlyn, Cora, Kallee and Ella. (Elizabeth Hustad/Laker Pioneer) 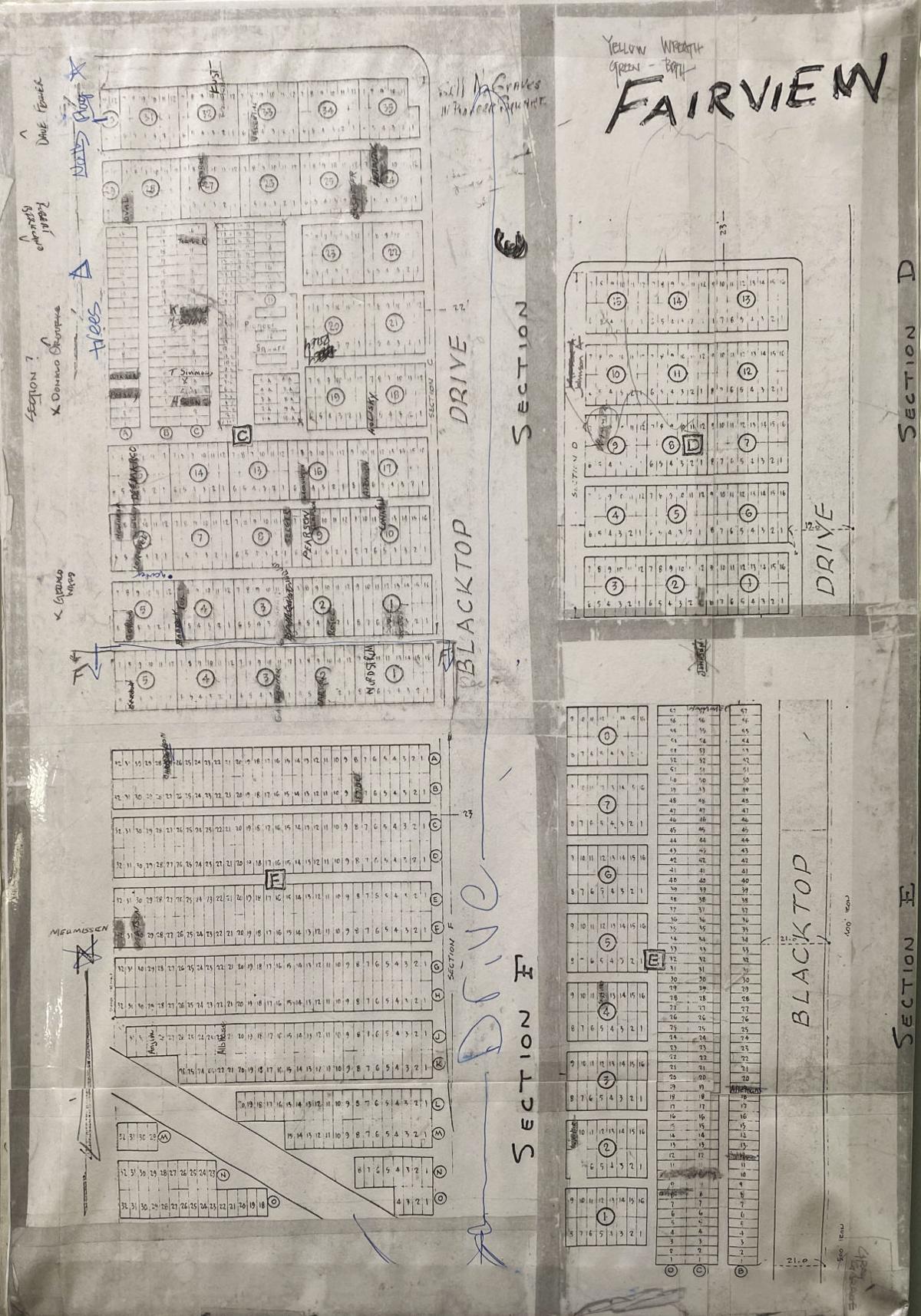 The old map of Fairview Cemetery is from 1988, marked up and hard to read. Said John Hannigan, sergeant-at-arms for American Legion Post 398, many veterans are missed each year when flags are planted at the gravesites. (Submitted photo)

The Girl Scouts in Troop #18378 earned their Bronze Award for digitizing the map at Fairview Cemetery in Mound. Pictured here are, left to right, Kaitlyn, Cora, Kallee and Ella. (Elizabeth Hustad/Laker Pioneer)

The old map of Fairview Cemetery is from 1988, marked up and hard to read. Said John Hannigan, sergeant-at-arms for American Legion Post 398, many veterans are missed each year when flags are planted at the gravesites. (Submitted photo)

The most recent map dates back more than 30 years. Its margins are marked with erasures, cross-outs and additions. Off the paper, the physical landscape dips down hills and a thatchy underbrush obscures some of the headstones. A few of these are from the Civil War era.

It’s meant that every year when members of the American Legion walk the grounds at Fairview Cemetery, searching out the graves of service members to honor them with flags and sprigs of arborvitae that a good many are missed.

A group of fifth-grade girls wanted to change that. Now, Fairview Cemetery in Mound has been digitally mapped out to show definitively where the cemetery’s 80-some veterans, police officers and firefighters are buried. They also included biographical information on those veterans for whom they could find the information.

The Girl Scouts in Westonka-Orono Troop #18378 started work on their project last fall and saw it come to life in the past couple weeks, with only a few tweaks left to complete.

“It just floors all of us at the Legion,” said Hannigan, who said the idea of a digitized map had been “kicked around for ages” but that that no one knew how to go about it. “This was a monumental undertaking. I mean, I would expect this of a full-fledged IT department!”

The Girl Scouts, who along with some in the Boy Scouts help out the Legion each year in planting the flags, earned the Girl Scout Bronze Award for their project, the highest achievement conferred on Scouts of their age.

There’s a tricky difference between a regular service project and a Bronze Award project, and that’s sustainability; it can’t be a one-and-done project but something that continues to pay returns in the future.

The girls had looked at other issues in the area, from trash in the parks to speeding in their neighborhoods, before deciding on the mapping project. It helped, too, that their troop leader works in Geographic Information Systems.

The map idea was just the ticket.

Beyond just mapping (and beyond allowing for ease of updating through means other than an inked “X” or scrawled name), the girls went further and researched the backgrounds of those veterans for whom they could find obituaries or articles. Attached as a pop-up to each star on the map is the name and service branch of the veteran, information on where and when they served and a photo of the headstone itself, all of it made for mobile platforms, too.

“You can drill down and bring it up to the individual sites,” said the Legion’s Hannigan. “They really did a bang-up job.”

Hannigan said a Boy Scout was going to tackle Mound Union Cemetary for his Eagle Scout project using the same technology and that Our Lady of the Lake Catholic Cemetery was also on the radar as a future project. “Eventually we do it all,” he said.

Having helped the Legion in the Memorial Day flag planting, the girls knew how tough a job it was each year and had seen the disappointment from those who’s loved ones were missed.

“People can be forgotten and important things can get overlooked,” said Ella, who helped on the research team for the project.

The girls received their awards in a drive-by ceremony June 12-15: troop leader Simon Morgan unloaded the American and Minnesota State flags at each house and drove a celebratory yard sign into the ground before each girl held up three fingers and said the Girl Scout Promise.

“It was all driven by them,” said Morgan, who said that even after meetings transitioned to Zoom because of the coronavirus pandemic that the girls were constantly asking whether they could still do the project. Hardly a surprise for a troop that also sold a thousand more cookies this year than last and which had a couple of the girls trekking out to ice houses to do it.

Morgan said about two-thirds of his troop were continuing on as Cadets in the coming year.