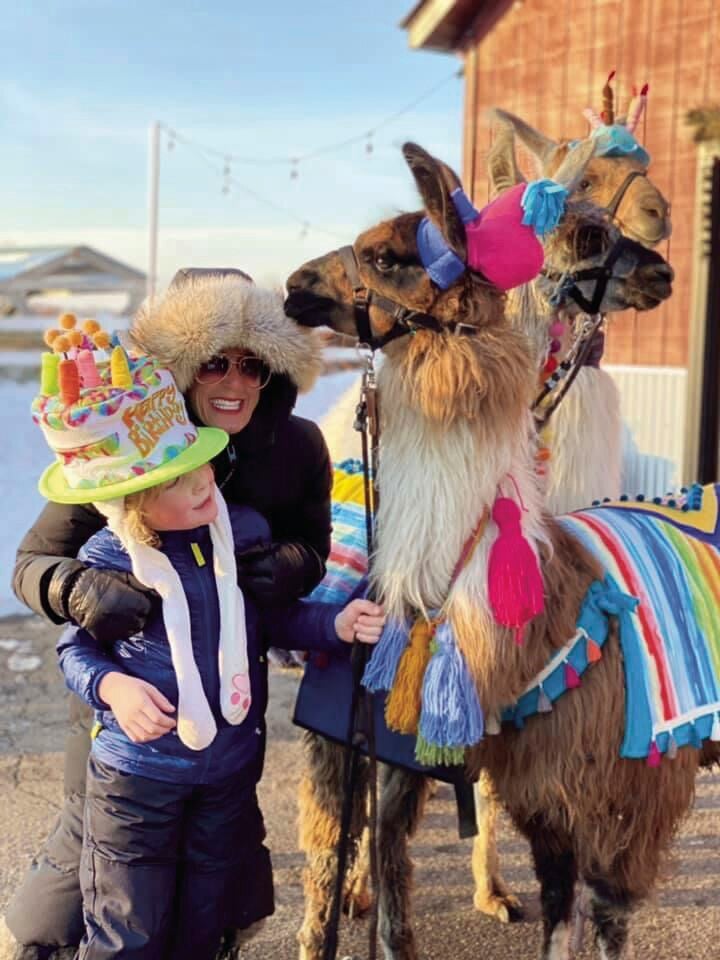 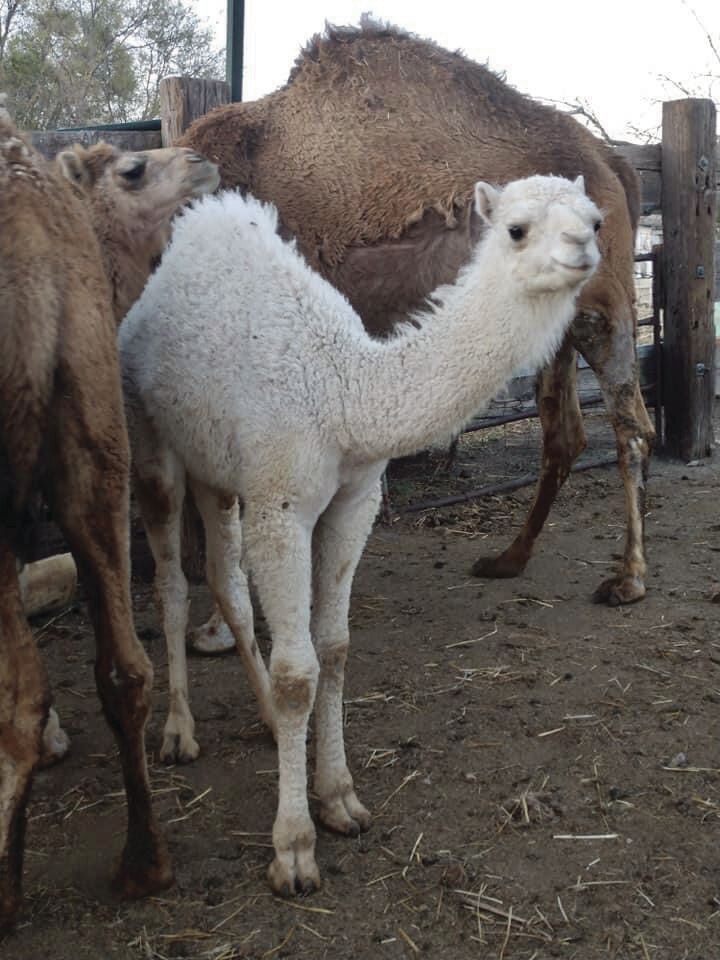 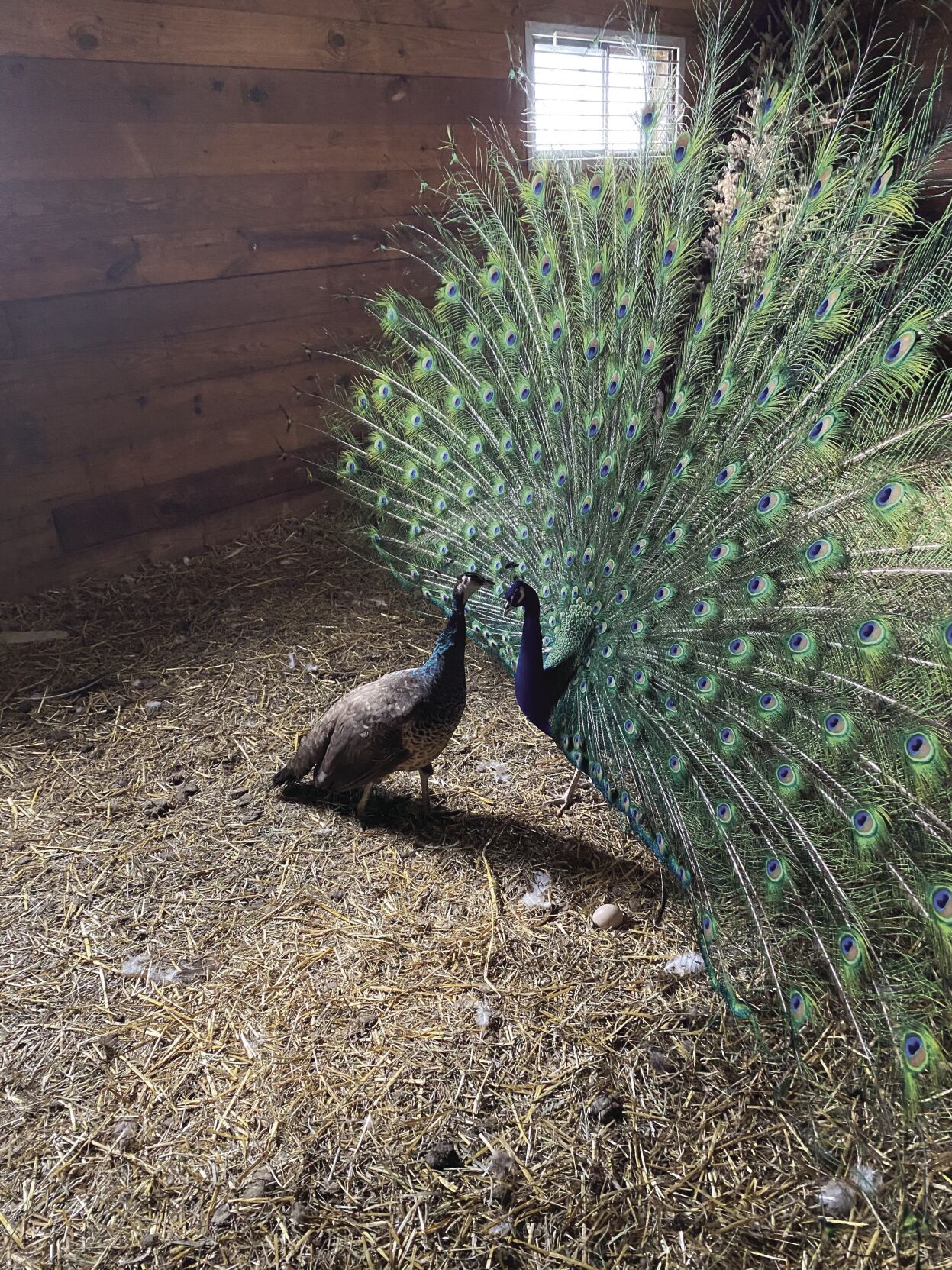 Stately trees rise high on either side of the road, their boughs giving a shading canopy, but at the turnoff from Kingswood Road to Game Farm Road it becomes an open vista.

Motor on a little farther, to Fielding, and turn up a steep drive.

Note the six peafowl at home in their gazebo-like enclosure.

Note the sneeze. That was a llama

Llamas have no upper teeth.

That’s a factoid that Natalie Pierce will likely tell you when she dips a plastic cup into the grain mix and pours some into your hand for any one of her llamas to vacuum up, its split upper lips moving furiously back and forth to shovel in the nosh.

“We wanted to get back to this,” she said, looking out the back door of the barn to the paddock where chickens wander in and out of a coop and from where the terrain slopes away in a series of grassy hills.

She and her husband moved onto their 12 acres abutting Kingswood Park about four years ago and with no thought at the time of dressing up llamas or starting an entertainment operation like Weeping Willow. But after Brad spent two years with a chainsaw in hand, hacking away and renovating much of the property, it became a matter wanting “everyone else to enjoy this as much as we do,” she said.

And so: llamas in tuxedos and a rare silver pied white-eyed peacock. A pair of 4-month-old goats named Luke and Leia (“May the Force be with you”) and a crested Polish hen named Oreo. Come September, a baby camel will join their midst.

“We don’t know what the heck we’re doing,” said Natalie. “We’ve got a lot of things in the works that we’re excited about, and we’re kind of just figuring out what works.”

Over the past nine months it’s been open, Weeping Willow has invited people to book the farm for private experiences that range from birthday parties to girls’ nights out and date nights. Visitors can take either a guided or unguided walk of the farm.

They can take a six-foot-tall llama for a walk of the farm.

The guided tours are more expensive—between $375 and $425 per group of 1-25 people, depending on the time of day and day of the week—but with that extra fee comes a more intimate, more hands-on and more informative experience, said Pierce. It also ensures that it’s just you and your pals; Pierce said she schedules just one group at a time, no matter how small that group might be.

It also ensures you get the full personality of the farm.

Coming onto the gazebo where the three peacocks and three peahens are housed, Pierce gestured to the beam that spans the enclosure and where Kevin, a 4-year-old blue shoulder, is lazing.

“They sleep right up there. But the males, because they lose their tail feathers, they don’t always know their weight—I don’t think they ever really know their weight behind them—so it takes them two, three, four tries to get up to bed every night.”

Weeping Willow has also done llama grams in past, bringing the Andean pack animals directly to you, but mostly the private events have been held farm-side.

Pierce is hosting the farm’s first open event—llama yoga—in August, and she said there’s also the possibility that in future a pair of llamas dressed to the nines in tux and roses could be guests to your wedding.

Incidentally, those outfits…Pierce has commissioned a friend for their bespoke suits. It’s tough buying off the rack when you’re a llama.

The farm is open to visitors year-round, and last winter was first run of the sledding hill and fire pit. Pierce said that as she’s figuring out what works, she’s also finding that there’s a wide variety in what people want.

“Every group is different in what they’re looking for,” she said, adding that she’s able to work with visitors to tailor their experience at the farm.

And sometimes, it’s just the need to get away that bring people out. Weeping Willow might be both a job and a retreat for her and Brad, said Pierce, but for their visitors it’s only a retreat.

Visits to Weeping Willow are by appointment and can be booked online at weepingwillowacresmn.com or by contacting Natalie Pierce directly at 952-201-1217.