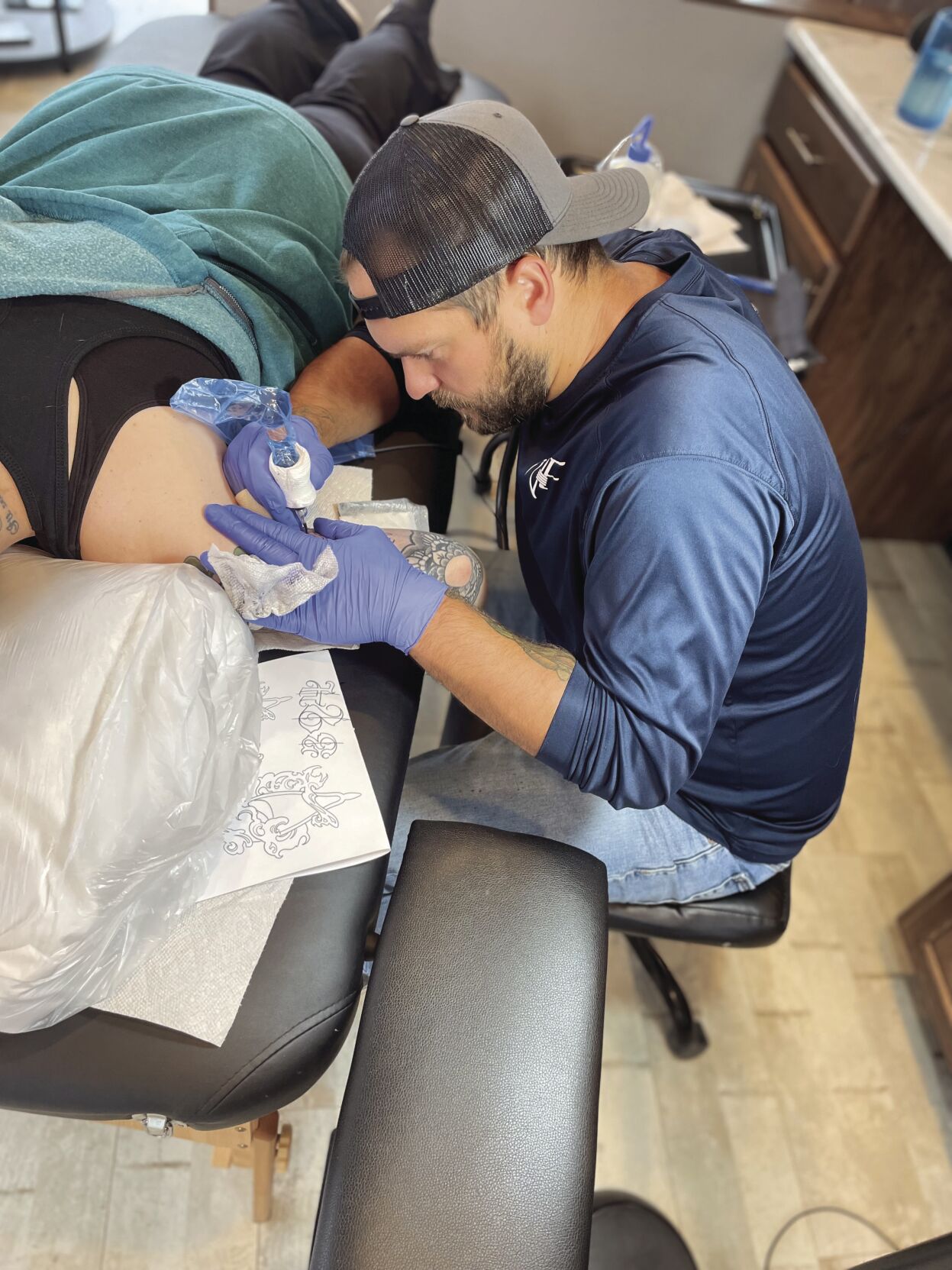 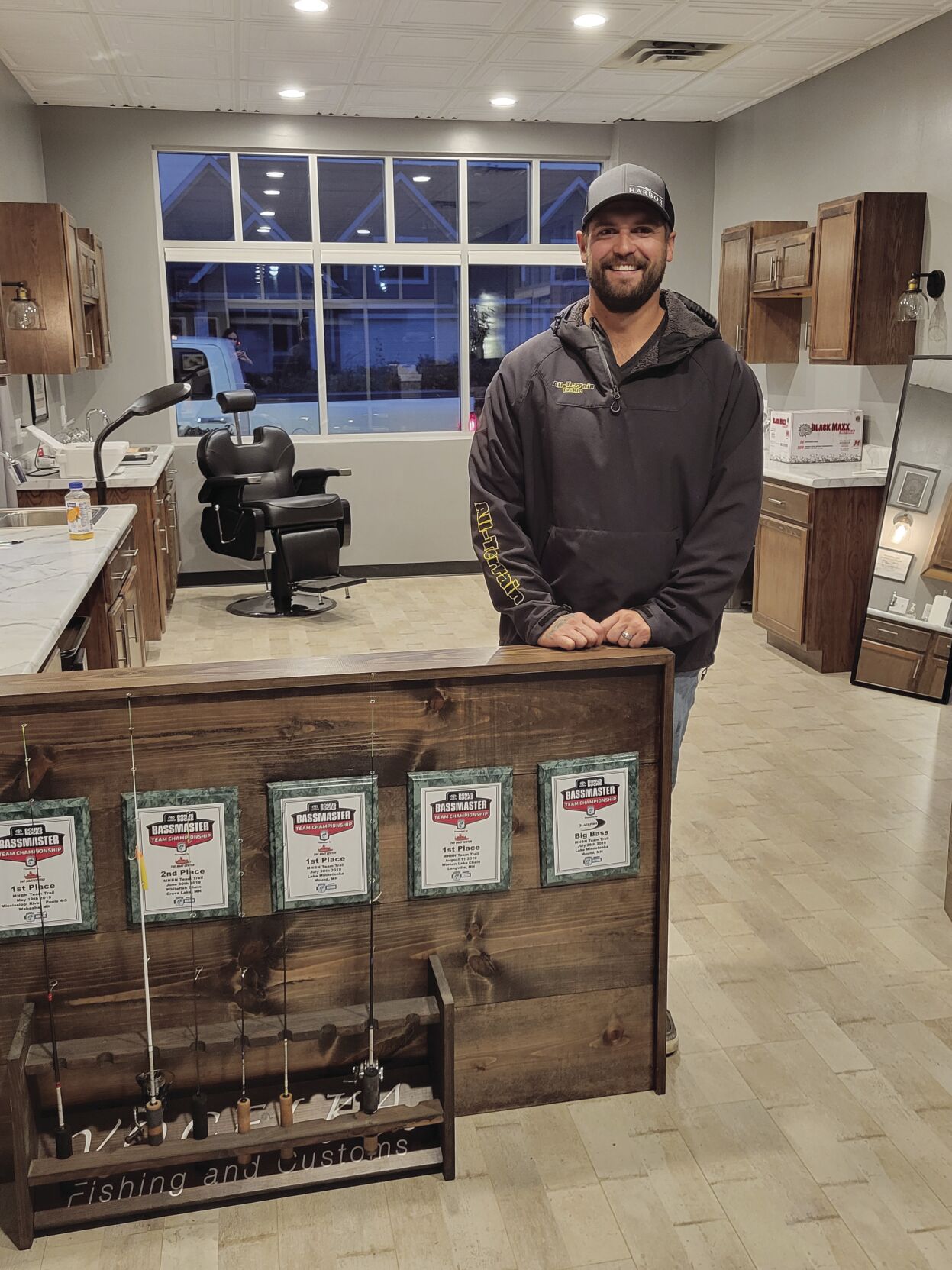 Dane Vocelka has found his niche in the rods and needles of two disparate businesses that, as it turns out, work quite well together: custom fishing equipment and tattooing.

Vocelka, who now lives in Buffalo, caught his first bass at age 5 and inked his first tattoo—the kanji for “patience” on his own left knee—while still in college in Duluth.

He’s fished many a tournament and worked at many a studio, both up north and in Eden Prairie, perfecting his art and building a following that in May this year showed its loyalty in supporting Vocelka’s fight with the neighboring Homeowners Association to locate his tattoo studio in downtown Mound’s Lost Lake building.

“It’s small bits of time. It’s one tattoo, it’s one thing here, it’s one piece of artwork…and over time, you grow this huge following of people—but you don’t see it. It’s not tangible. Until something like this happens,” said Vocelka. “Overwhelming is probably the best way to put it, in a good way.”

The two prongs of Vocelka’s business developed almost simultaneously. Having previously worked in Mound for a custom rod builder, he over time developed a knack for building custom fishing rods, a skill he then took north with him and, in fishing bass tournaments around Duluth, gained a following for his work.

These adventurists—whether competing with or against Vocelka—then learned that he did tattoos.

“It became this unique, niche market of artistic people and fishermen with attention to detail that appreciate the outdoors but were also willing to get tattooed,” said Vocelka.

The bass fighting circuit became “a one-hub stop” where Vocelka said he could compete, show off his custom rods and talk about the work he did back in the studio, often times seeing those fellow anglers in the chair soon after meeting them. “That’s where it started, in Duluth, and the whole thing kind of blew up in my face,” he said, laughing.

Vocelka opened his studio in Mound this August. The exterior is unassuming: a simple sign of clean lines reads only “The Harbor.” You’d never know it’s where you’d go to get inked.

That clean finish was a good faith promise that Vocelka had made to city officials when he came before council this spring asking to locate in the retail building at Lost Lake. It’s also part of Vocelka’s vision for his studio as he sets up against what he said is a persisting, though slowly fading, stigma about the tattoo industry.

“I think there’s still a little bit of a stereotype with tattooing, and I think the stereotype is more in the clientele—that’s where [the stereotype] is driven, that it’s a little more riff-raffy and you have night goers and it’s just kind of ‘not clean.’ But that has slowly changed over time,” he said. Now, an artist’s clientele is just as apt to be doctors, lawyers and other professionals.

Most mornings find Vocelka sitting at the front of studio, sketching out the art for the day’s sessions, framed in the large window by the contrast between the interior’s lighting and the pre-dawn darkness outside. A coffee bar stands against the front wall and fishing rods, backed by championship tournament plaques, add extra facing to the counter.

“It’s not this little underground, private, ‘you have to be part of the club’ kind of thing,” he said, paging through the portfolio of his work that sits on the coffee table. There’s also a recent issue of Bassmaster magazine.

“We’re changing the perspective. Because [tattooing] is a fine art.” Vocelka said he invites the casual visitor who just has questions to come in and ask them.

Up to the end of October, Vocelka had been solo at The Harbor, but beginning this month he’ll be joined by an artist he worked alongside of in Eden Prairie and who had also been a groomsman in his wedding. That’s one thing that, changing the perception aside, Vocelka anticipates continuing from the old ways of studios—that among those who work there, it feels like family.