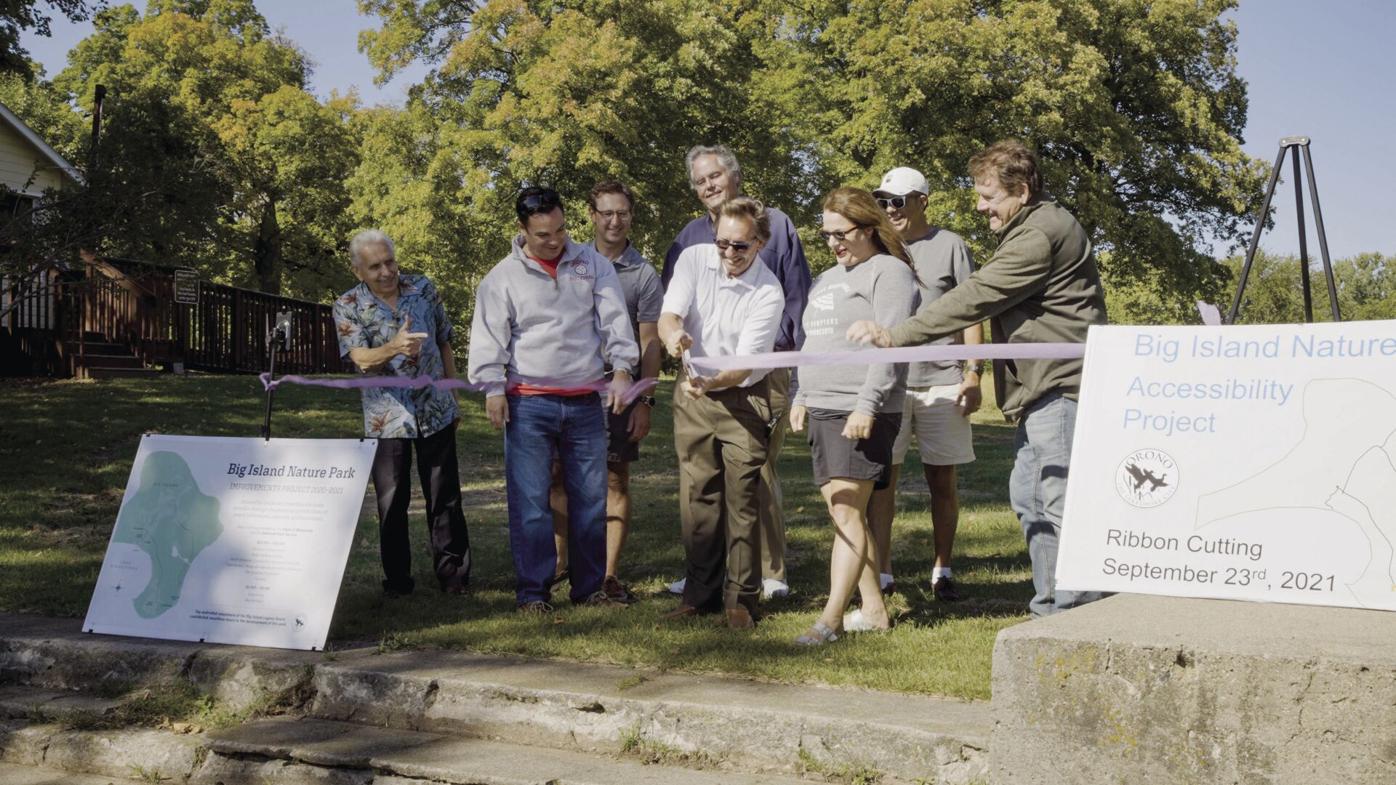 Orono mayor Dennis Walsh (center) and other city and civic leaders opened Big Island up with a ribbon cutting ceremony on the Island on Thursday, Sept. 23. (Photos courtesy Josh Hild) 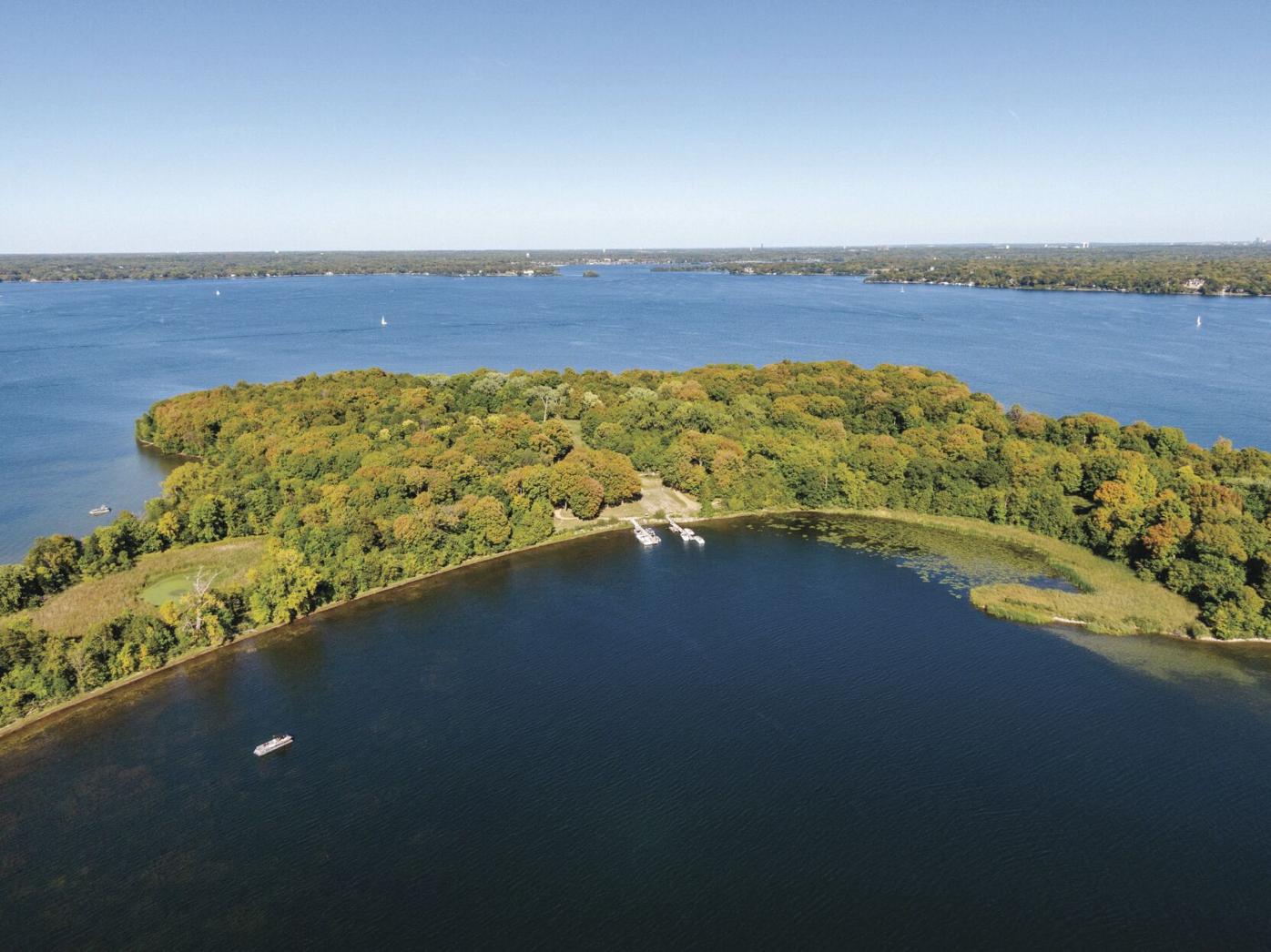 Orono mayor Dennis Walsh (center) and other city and civic leaders opened Big Island up with a ribbon cutting ceremony on the Island on Thursday, Sept. 23. (Photos courtesy Josh Hild)

The unique history of Big Island added another chapter as years of hard work came to fruition last week on the Lake Minnetonka island.

Years of hard work by many different government entities and private organizations culminated with a ribbon cutting ceremony last week to celebrate the restoration and clean up of 56-acres on the eastern third of Big Island.

“Just another great project that we can we say we kind of put it together,” Orono mayor Dennis Walsh said. “We finished it. Took a bunch of years to do it. A long culmination of a lot of people besides us and besides staff and a lot of other helpers. To see it come together after this long it gives you faith that if you work hard enough that you can see it to the end.”

The project started in 2006 with cooperation from the City of Orono, the Minnehaha Creek Watershed District, the Minnesota Department of Natural Resources and many other organizations and people.

Some of the new additions on Big Island are American with Disabilities Act (ADA)-compliant amenities such as walking paths, picnic tables, bathrooms, docks; signage with information about Big Island’s unique history; and stunning views of the lake.

“You can go out and experience the island and all of its history,” Walsh said. “This has so much history on it. It’s nice to give people the opportunity to enjoy the biggest track of land in Orono without a house on it.”

Big Island is located on the lower lake portion of Lake Minnetonka. The island is partially developed with single-family homes but otherwise is largely preserved in parks owned by the city of Orono, Three Rivers Park District, and the Minnehaha Creek Watershed District (MCWD).

The work on the island included clearing tons of brush and garbage from the site and restoring about 3,000 feet of shoreline among other things.

According to the Big Island Legacy group, in 2003 the property was put up for sale and the city of Orono decided it would be better to keep that part of the island free of development and put together a financial package to meet the $5.7 million asking price of the camp. Those funds included $1.3 million from the Lurton and Carlson families, $1.55 million from Orono HRA Public Project Revenue Bonds, and a $2 million grant from the State of Minnesota.

In early 2005, the Minnehaha Creek Watershed District agreed to partner with Orono by contributing the remaining $850,000 in exchange for a Conservation Easement that would preserve the open space and natural character of the entire 56-acre property.

As a part of this agreement, 45 acres were to remain undeveloped, allowing the remaining 11 acres to be developed in a limited manner for generally passive recreational and educational uses. Purchase of the property was completed in January 2006.

According to Orono city administrator Adam Edwards the project really began in 2017-18 with the master planning, which was followed by grant application for a DNR grant in 2019 with design and coordination of the project continuing through that time.

Edwards said, the project was awarded in spring of 2020 at the same time the project received funding from the State Bonding Bill, with construction starting in the fall of 2020 through the summer of 2021.

“I had a great time out there,” council member Richard Crosby IV said. “The trails looked wonderful. The signage on the island is fantastic, showing all the historic significance of everything. It was fun. It’s definitely something all our residents should go see and appreciate.”

Walsh agreed, “I was a great effort from a lot of people to bring it back. I’m as proud as I can be. Its just beautiful. Hopefully, this can bring a whole new life to Big Island.”

The island is only accessible by boat but it is free to visit the nature park. Boats can either tie up to docks on the south end of the eastern part of the island, or beach on the very east side of Big Island. People must take their garbage with them off of the island.