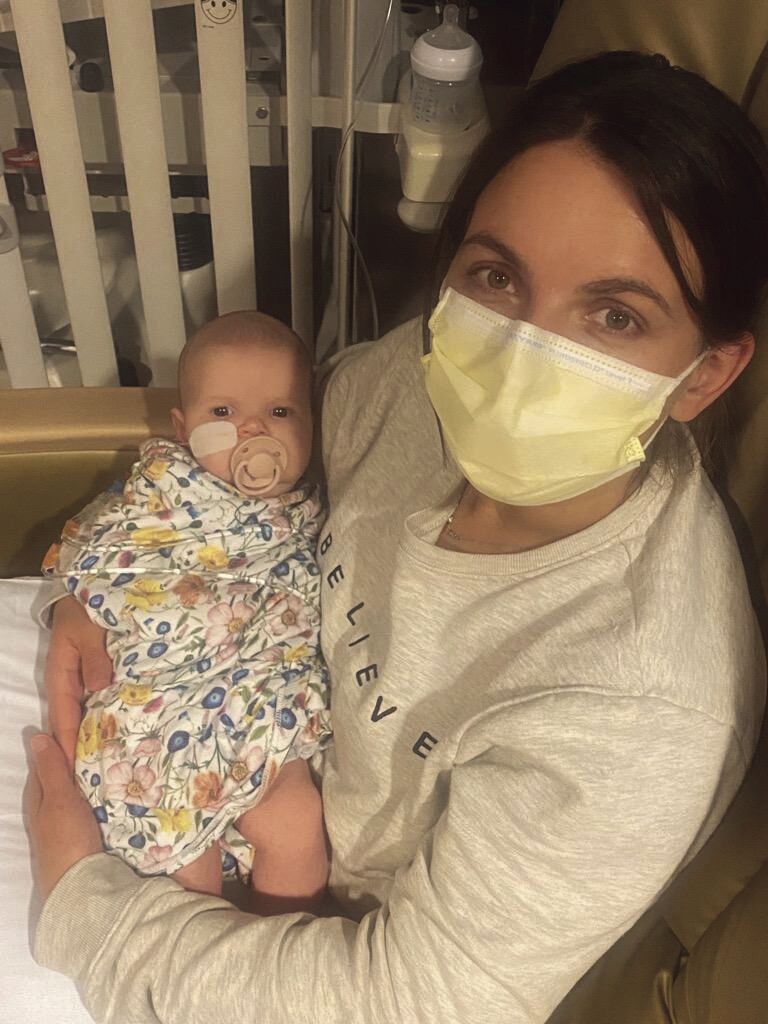 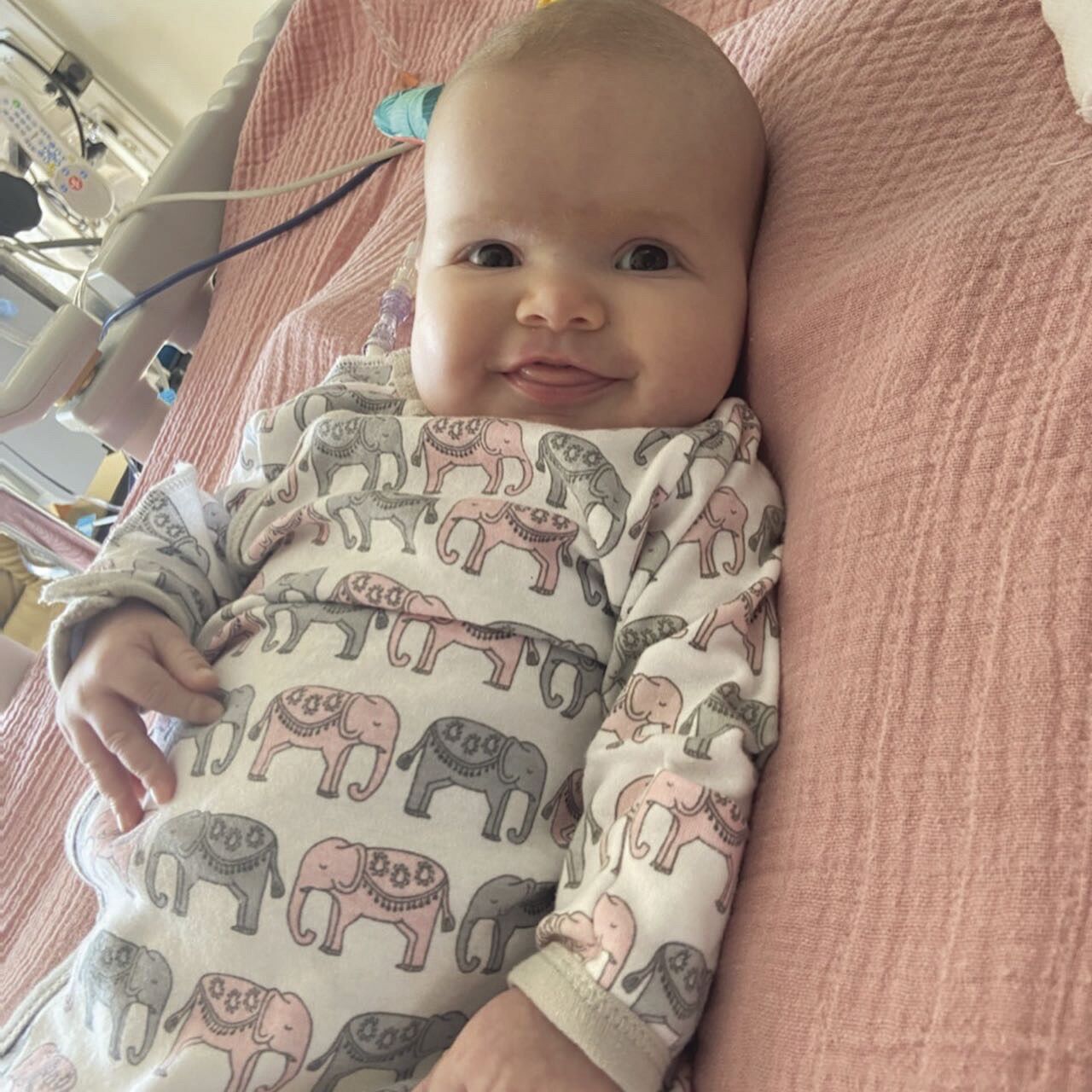 A Minnetrista family that welcomed their first child this July is now living at the hospital, “praying for a miracle” that their now 10-week-old will receive a heart transplant for an incredibly rare disease.

“We’re feeling so many things. It feels unfair because you ask yourself, ‘why us?’ but then, ‘why not us?’ and the chance of this happening to us is the same as it would have been to any other person in the world,” said Kate Baker, mother to newborn Elodie.

As a medical malpractice attorney, Kate said she was “acutely aware of all the things that could go wrong prenatally” but that she had a healthy pregnancy and a normal delivery. On July 2, she and husband Collin Baker welcomed the “normal, happy, healthy” Elodie into their lives.

Kate’s mother had encouraged her to take Elodie to the ER that night as a precaution, and at first everything seemed like it would be okay. But then the doctor told Kate and her husband that there was something “discerning” on the X-ray and that his recommendation was to take Elodie to Children’s Hospital.

Over the next 36 hours, the then 7-week-old girl underwent multiple rounds of labs, several imaging studies and a heart catheterization. She was then diagnosed with pediatric dilated cardiomyopathy.

Pediatric dilated cardiomyopathy (DCM) is itself a rare disease, affecting just .037 percent of children, or three to four children in 10,000. Even more rare in Elodie’s case is that her diagnosis doesn’t stem from one of the two known causes of DCM and is instead of unknown etiology.

Unlike those born with a congenital heart defect, Elodie’s heart is “structurally perfect,” the family said, only the muscle in the left ventricle doesn’t pump and her heart is operating at just 10 percent capacity.

The National Institutes of Health estimates that 40 percent of children with DCM either receive a heart transplant or die within 5 years of being diagnosed with the disease.

“We’re praying for a miracle,” said Chris. “And that’s what we’re hoping for is a miracle because we recognize that someone is going to suffer for these other kids to get a heart. It’s just a horrible thing all around.”

There is no corrective surgery for DCM, and a heart transplant is the only option, said Kate.

Elodie is currently ninth on the list for a transplant and is the only child in Minnesota under the age of one who is in need of a heart.

Organ donation in the United States is heavily regulated, and especially so for heart transplants. Factors like geographic location, eligibility, listing status and listing date are all assessed to ensure fairness when only about half of U.S. babies in need of a heart receive one in any given year.

“It seems so insurmountable knowing that she’s number nine on the list and her situation is so fragile,” said Chris. For those who receive a heart, the average wait time in the U.S. is 6-8 months.

Certain indicators are in Elodie’s favor, said both Kate and Chris. The fact that she is an otherwise healthy baby and with a low antibody exposure mean that her body is less likely to reject the heart. Her blood type, A positive, also matches that of 88 percent of Americans.

She also got on the list for a transplant at the earliest possible time, just three days after she was hospitalized. “Time served” is factored into decisions, said Kate.

Elodie is now on the heart medication Milrinone, which helps the heart to squeeze and relax. The medication has a 7 percent chance of working, but “that 7 percent seems pretty good when it’s a one in a million that she ended up with this diagnosis,” said Chris. The figure quoted to Elodie’s family was that it would be nearly $10,000 to keep Elodie on Milrinone for just one year.

“We try to learn from what happened yesterday and then try to be present today and then try to have hope for tomorrow,” said Kate. “A heart is the one thing you can’t give your child […] We just have to keep trying to will her to be as healthy as she can be.”

Throughout this, Kate, who said she has been a donor all her life, said she has become even more of an advocate for organ donation since Elodie was admitted to Children’s.

“I want people to know how incredibly important it is and what a gift it is to these families,” she said, citing the fact that a single organ donor can save up to eight lives and that a single tissue donor can positively impact the lives of up to 50 people. “The gift that they would give would mean the world to the people who are receiving it.”

The Knights of Columbus are hosting a spaghetti dinner fundraiser for Elodie at Our Lady of the Lake Catholic Church in Mound from 6-8:30 p.m. on Saturday, Oct. 2. The event starts at 6 p.m. with dinner served at 6:45 p.m. ($12 per person). There will be a wine pull, auction for Vikings tickets and Elodie stickers, bracelets and hearts for sale.

You can follow Elodie’s progression through her Caring Bridge site at https://www.caringbridge.org/visit/elodiebaker.