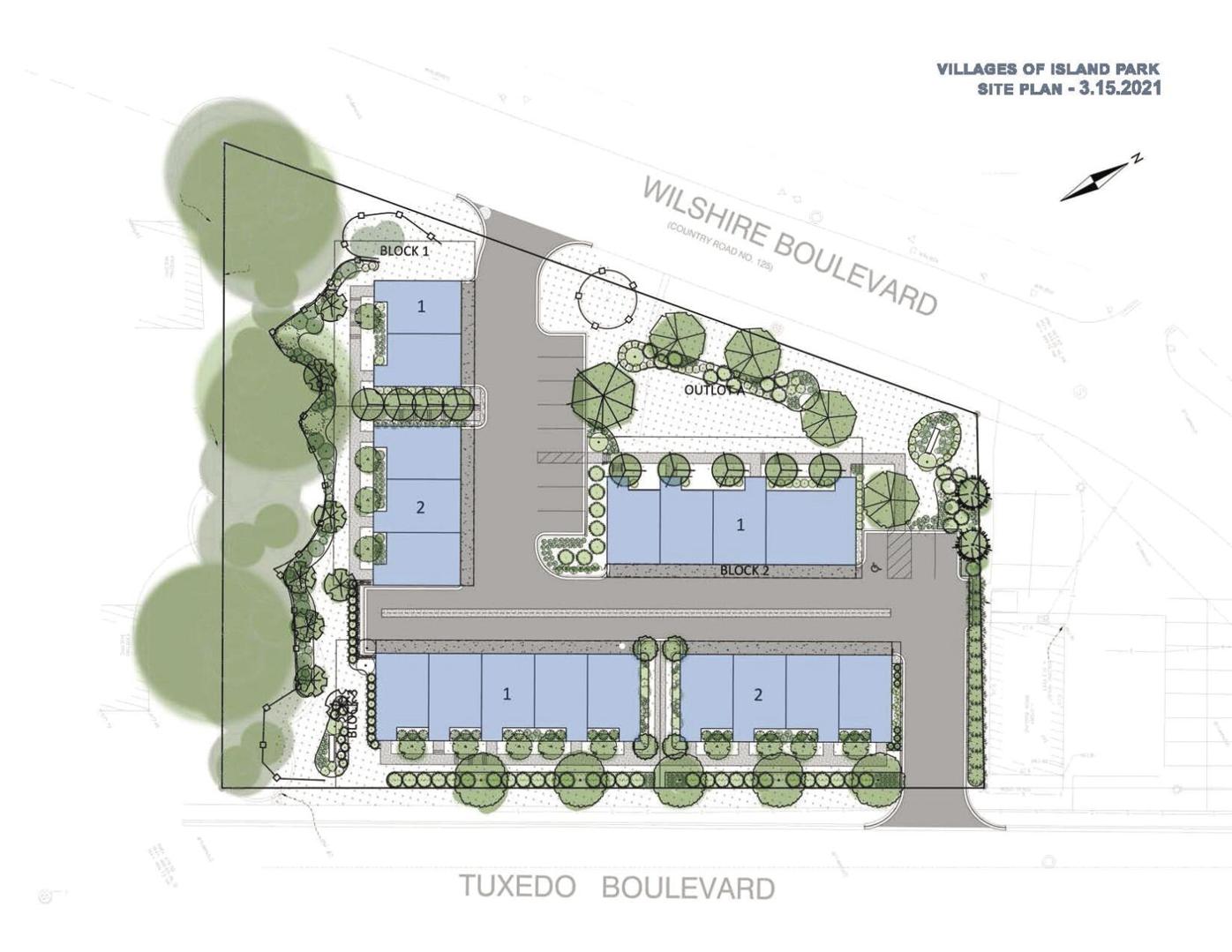 The island in Mound is ready to receive additional multi-family housing near Black Lake and Spring Park Bay now that council approved a developer’s rezoning and CUP requests March 23.

Wayzata-based Inland Development Partners is proposing 18 rental townhomes for the vacant 1.25-acre site in the neck of Wilshire and Tuxedo boulevards. The area had previously been zoned for commercial, dating to an old supper club that was closed some 30 or 40 years ago.

A decision to split the development—termed the Villages of Island Park—into five separate buildings was made with attention to the surrounding neighborhood, said site owner T. Cody Turnquist. Single-family homes to the west and north, an auto repair shop directly behind and the Pelican Point and Lakewinds condominiums across Tuxedo to the east currently define the neighborhood.

Turnquist and Inland’s Steve Schwanke have faced minimal opposition to their proposal, which they first presented to the city’s planning commission in February this year, although safety and density concerns have been there from the project’s first days in the public eye.

Written comments submitted to the city ahead of the first planning commission session Feb. 2 show that nearby residents are generally supportive of development on the site. A letter written on behalf of the Pelican Point homeowners association notes that development there has been anticipated for some time and that its members were “pleased to see it converting to residential use.”

But the upper-limit density of the project, combined with the pinched sightlines at the Wilshire-Tuxedo intersection and the amount of traffic already coming through that corridor weren’t so savory, they said.

Another resident wrote to say that “the proposed project looks jammed into the site” and argued that the density of the project was being justified on the grounds that the site’s previous use was as a supper club, a justification that he said was faulty reasoning when the restaurant has been closed for decades.

The Villages project, at 18 units on 1.25 acres, is at the very limit of what Mound’s Comprehensive Plan says the site can bear, but some residents have argued that the nature of the site and surrounding area—hilly topography, high traffic and that sharp Y intersection at Tuxedo and Wilshire—would make fewer units more prudent.

Residents also showed concern when they heard the townhomes would be a rental development. The initial intention was to build to sell, said Inland’s Schwanke, but “the market simply isn’t willing to pay the amount for the cost that it takes to build.” Rates for the mostly two-bedroom units are expected to range from $2,300 to $2,900 a month.

Inland’s proposal has not received the same largescale opposition that others developers have faced over the past year in their proposals for multi-family housing in the city’s downtown, and the Villages project was even deemed “attractive and well designed” by one Pelican Point resident who also argued that while the area does see high traffic, any “increase in traffic from this project will be so small as to be unnoticeable.”

Between the final meeting with commissioners earlier in March and its presentation to council March 23, Inland had performed an additional review of parking and site access, giving some study to a resident’s suggestion of dual access onto Wilshire and none onto Tuxedo. That suggestion was made with respect to existing traffic concerns on Tuxedo.

No changes were made to the site access plan, although Inland did revise its first proposal to address parking and ended up adding three surface level parking stalls. Some residents had said the parking first proposed was insufficient and would likely spill over into street parking, further tightening an already narrow Tuxedo Boulevard. The development now proposes a total of 46 parking spaces, 35 of them covered spaces for future Villages residents and 11 them surface slots for guests.