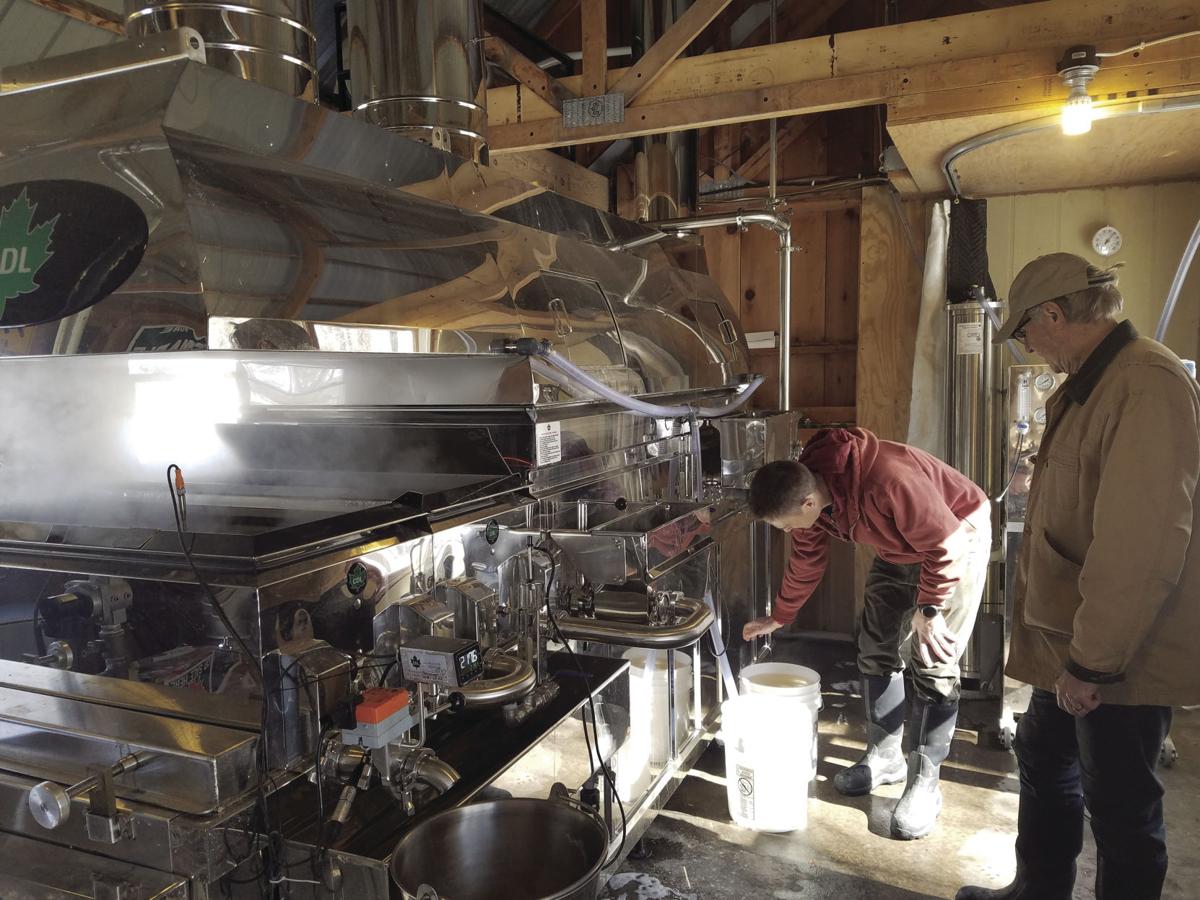 Peter Somers (in red hoodie) checks the evaporator at Somerskogen Sugarbush while his dad, Don, looks on. The two have been making maple syrup in Minnetrista for 27 years. (Elizabeth Hustad/Laker Pioneer) 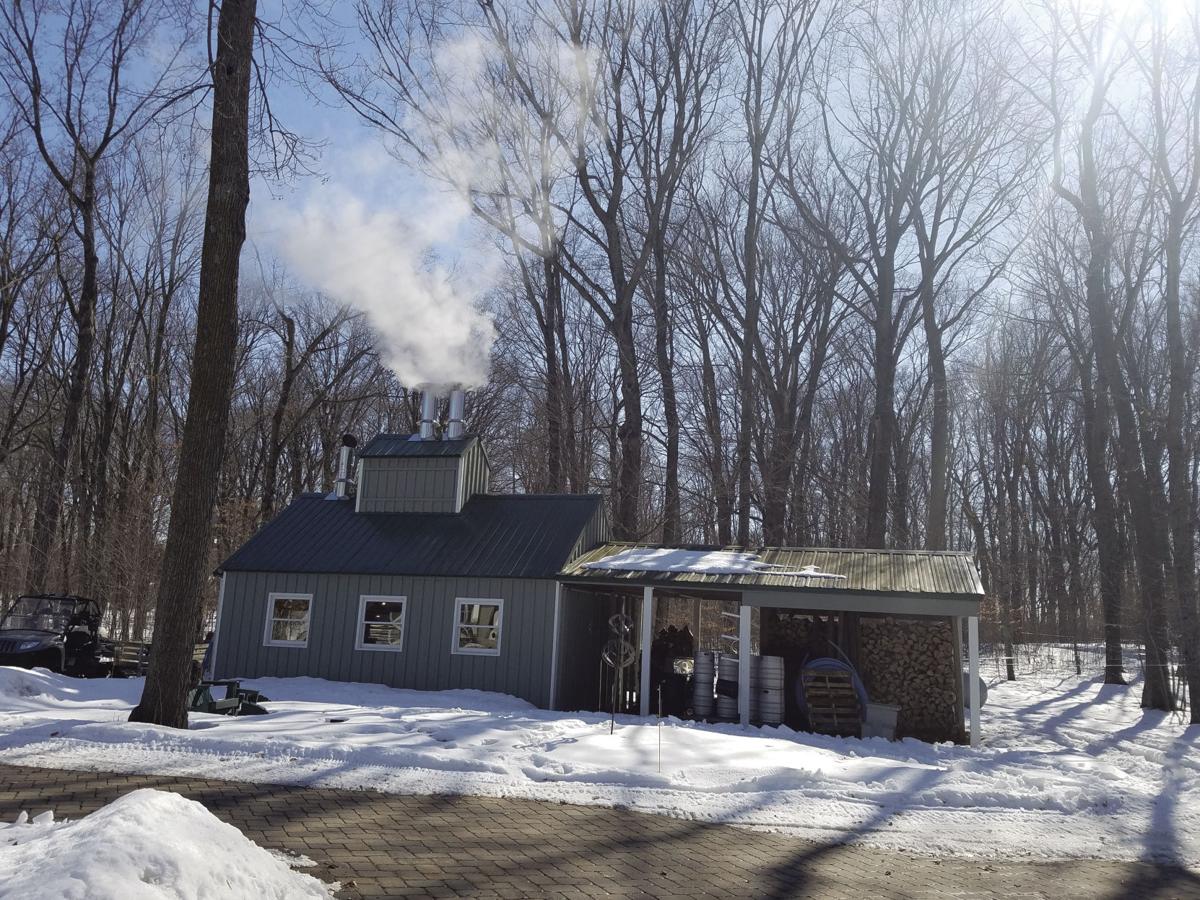 Sap gets pumped up to the sugarhouse, where it’s boiled and filtered. (Elizabeth Hustad/Laker Pioneer) 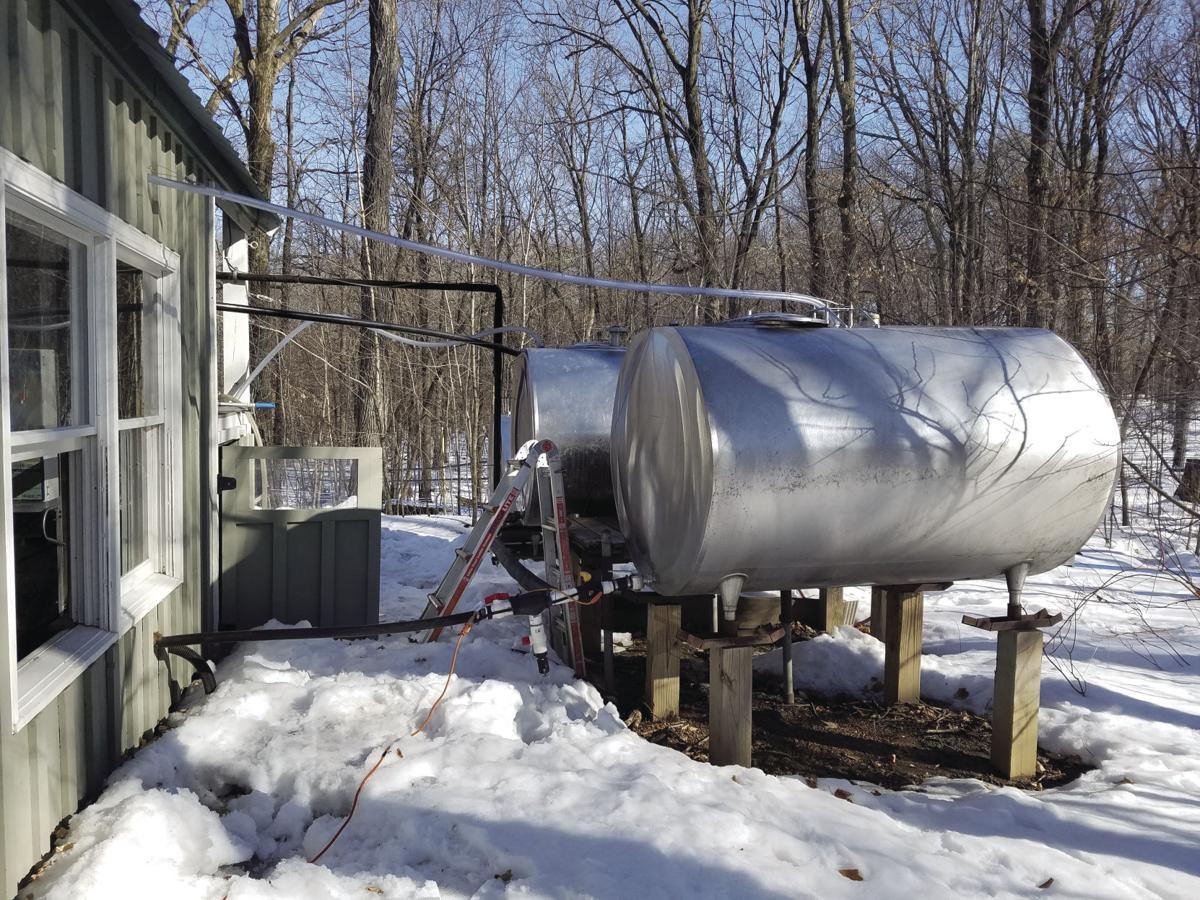 The Somers have automated the syruping process over the years, and sap lines connect 1,200 taps in their forest, feeding it to a central collection tank some 900 feet downhill. (Elizabeth Hustad/Laker Pioneer)

Peter Somers (in red hoodie) checks the evaporator at Somerskogen Sugarbush while his dad, Don, looks on. The two have been making maple syrup in Minnetrista for 27 years. (Elizabeth Hustad/Laker Pioneer)

Sap gets pumped up to the sugarhouse, where it’s boiled and filtered. (Elizabeth Hustad/Laker Pioneer)

The Somers have automated the syruping process over the years, and sap lines connect 1,200 taps in their forest, feeding it to a central collection tank some 900 feet downhill. (Elizabeth Hustad/Laker Pioneer)

The Somers know to strike while the sap is aflow, rushing out on a recent Sunday to change the spiles on some 1,200 taps throughout their maple forest: maple syrup season is afoot.

Don and Peter Somers are the father and son pair behind Minnetrista’s Somerskogen Sugarbush, an operation that dates to when a school-aged Peter and his friends had the run of the place.

“They’d just swarm the woods and we’d have 400 bags emptied in no time at all,” said Don.

Peter is now 40 and with his own family in Rochester, and Don retired three years ago. The collection bags have long since been replaced by sap lines and a central collection tank, and the number of taps - and amount of sap collected, of syrup produced - continues to grow every year.

“We’ve seen the season start earlier and earlier. Over the 27 years we’ve been doing this, this is the second earliest we’ve ever started,” says Don. The day’s batch boils nearby, sending steam and a candied maple aroma up the sugarhouse stacks. This season’s first collection was March 1.

“It’s all weather-dependent […] If the buds come off there’s a chemical change that occurs in the sap and that gets a real sour taste to the syrup,” says Don. The trees’ natural bacteria start working at the sap as soon as it flows, and it has to be collected quickly. “The whole goal of getting good syrup is really to process the sap as quickly as you can and as clean as you can.”

On this particular day, five days into the season, the sap at Somerskogen is flowing strong. Don’s wife, Mary, comes into the sugarhouse to report that the 800-gallon collection tank is nearly half full of sap already. Don estimates that 1,600 gallons, or two tanks-worth, of sap can be collected on a day like this and that he and Peter can average a rate of 11 gallons of syrup per hour.

For the Somers, maple syruping is a hobby – “it doesn’t cash flow,” said Don, who admitted the industrial-grade propane evaporator, installed last year and replacing the wood-fired boiling pans, cost him a pretty penny – but the Somers count as regular customers Mackenthun’s Meat Market, which sells their syrup and uses it in its sausages and bratwurst; Chaska’s Red Bench bakery and Bellecour restaurant in Wayzata.

“This will knock your socks off,” he says, ladling out a half measure of syrup from deep inside an old Blanton’s bourbon barrel.

In exchange for the prized Blanton’s, sent out from a guy he knows in Sioux Falls, Don is sending back syrup he will have aged 10 months in the barrel.

Already, after just seven months and before even the charcoal has been filtered out, the taste comes through: the light vanilla-oak flavor of the bourbon blooms without any of its heat before it finishes with a traditional maple taste.

Like the maple cream that Don and Peter made a couple of years ago (and of which Mackenthun’s bought up the whole stock), Don says the barrel-aged syrup is more time consuming, more work-involved and “I’m sure we don’t even make money at it,” but that it’s worth the joy of the hobby.

When Don and Mary bought the property off County Road 110 in Minnetrista in 1993, the previous owners had left behind a small boxful of spiles. Those little spigot-look-alikes inspired the first taps, just 23 of them back then, their yield collected in bags and boiled by hand over a 2-by-4-foot pan.

Now, the sugarhouse rises up on site, its stacks venting steam through the forest; and a methodical network of blue sap lines connects every tree and feeds into a collection tank 900 feet downhill. A vacuum pump delivers negative pressure to the maples, tricking them into a low pressure system that’s ideal for sap flow.

“We both tend to get out of control with things, and we always just like to do more,” says Peter. “When we first started making syrup and found out that we had a lot of [maple] trees, then the only natural thing for us was to figure out how to tap every single one of them.”

A reverse osmosis machine takes off three-quarters of the water before the sap even enters the evaporator, further automating the process. And that evaporator has allowed the sugarbush to use every drop of the sap collected, a cherished commodity nearly 40 gallons of sap are needed to make one gallon of syrup.

“We can turn off the evaporator on the last drop of sap, whereas we always had to save maybe 75 gallons [of sap using the wood-fired pans],” says Don, who explains how the fire bricks would keep the sap boiling. “We’d shut down the evaporator, but the retained heat would still be boiling all the sap and it got to be a guessing game.”

Last year, the Somers hit 531 gallons of syrup from about 20,000 gallons of sap collected through just over a thousand taps. They’ve added an additional 150 taps this season; and still, Peter jokes that he’s a bit irked that another 30 maples nearer the house remain untapped.

Says Don, “I just really like making use of what we have out here.”